The new head of NHS Test and Trace today warned Britons not to socialise before Christmas ‘unless you need to’ because of concerns surrounding the new supermutant Omicron.

UK Health Security Agency (UKHSA) chief executive Dr Jenny Harries issued the stark warning as she admitted that vaccines are likely to be less effective against the strain, which she said could have ‘significant impact on our hospitals’.

She hinted that WFH could be the next measure to be reintroduced if the outbreak starts to grow, adding: ‘If we see surges, then working from home will be a good thing to do.’

Boris Johnson will hold a Downing Street press conference this afternoon to give an update on the Covid situation and lay out the suite of measures that kicked in this morning to tackle the variant.

The Government’s new rules on face masks and self-isolation to slow the spread of the variant came into effect in England from 4am this morning.

Face masks are once again compulsory in shops and on public transport while all travellers returning to the UK must now take a PCR test on or before day two after their arrival. They can leave isolation once they have a negative test result.

All close contacts of Omicron cases must isolate at home for ten days regardless of whether they are vaccinated or not, prompting fears of another ‘pingdemic’.

The number of Omicron cases identified in the UK has now hit 14 after Scotland announced three more this morning, bringing its total to nine, while England has discovered five.

Britain yesterday expanded its current booster rollout for all adults over 18. Even though the vaccines are expected to be much weaker against Omicron, it is hoped that topping up everyone’s immunity to very high levels will offer an extra line of defence against the incoming wave. 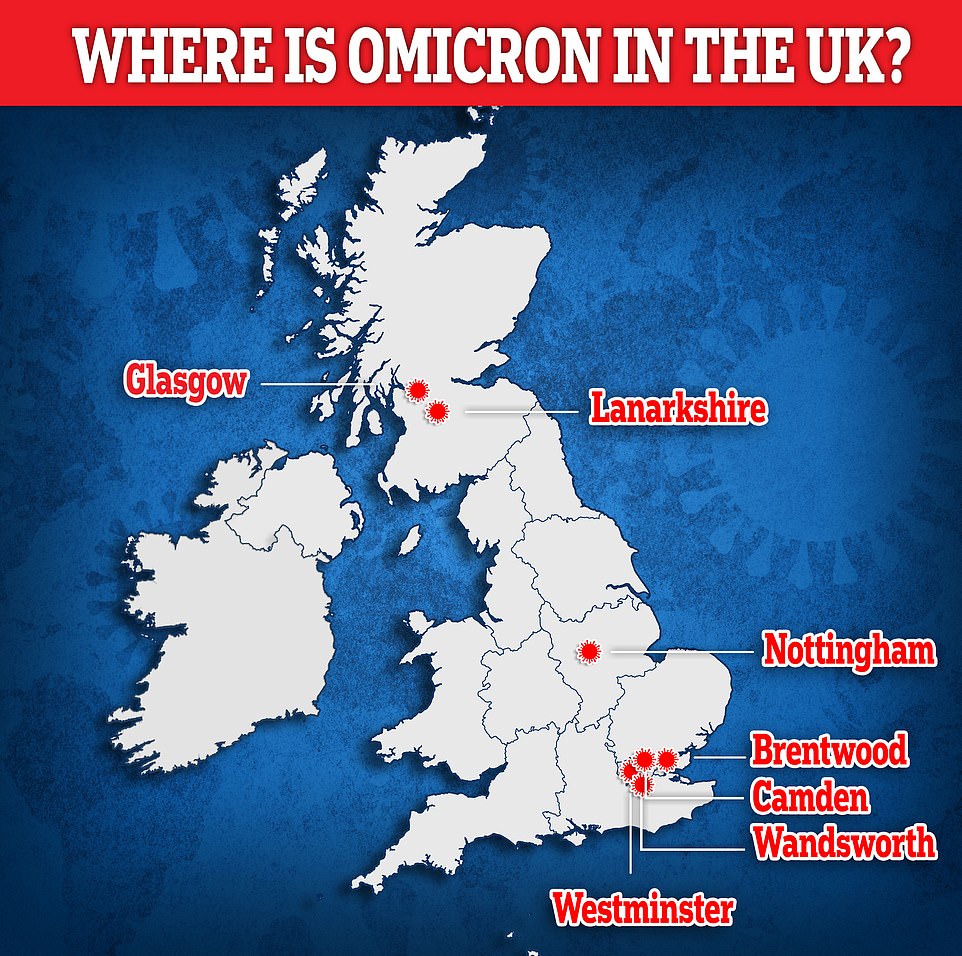 Vaccine-makers Moderna and Pfizer are already working on Covid vaccines that could tackle the Omicron strain, if it poses a problem for the current crop of vaccines, but they won’t be ready until mid-2022 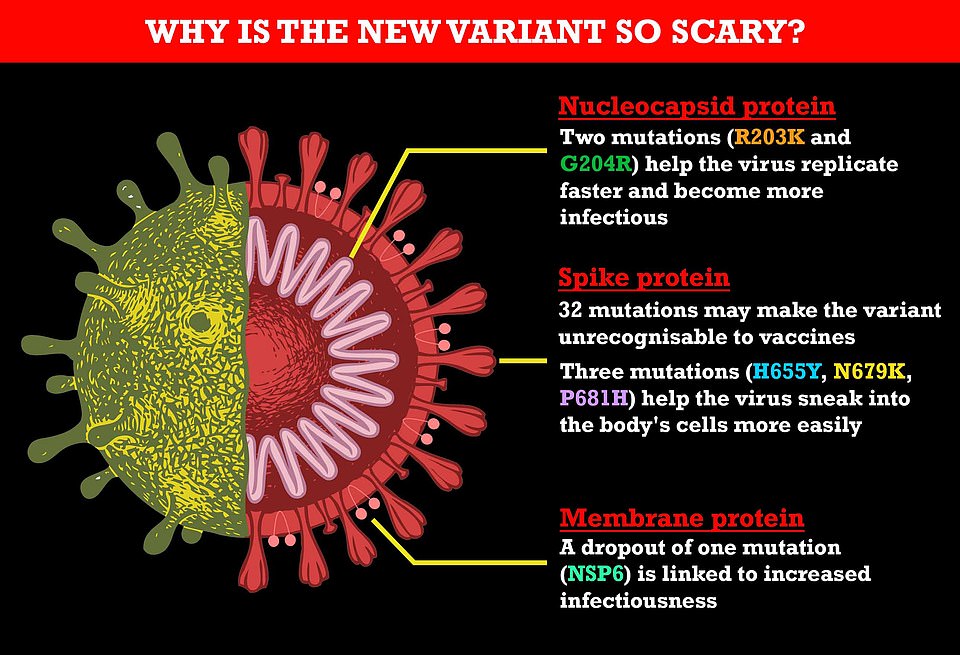 The Botswana variant has around 50 mutations and more than 30 of them are on the spike protein. The current crop of vaccines trigger the body to recognise the version of the spike protein from older versions of the virus. But the mutations may make the spike protein look so different that the body’s immune system struggles to recognise it and fight it off. And three of the spike mutations (H665Y, N679K, P681H) help it enter the body’s cells more easily. Meanwhile, it is missing a membrane protein (NSP6) which was seen in earlier iterations of the virus, which experts think could make it more infectious. And it has two mutations (R203K and G204R) that have been present in all variants of concern so far and have been linked with infectiousness

Covid vaccine maker Moderna warned today that it will take months to develop an Omicron-specific booster jab as Scotland detected three more cases of the mutant strain and Boris Johnson prepares to give an update on the variant at a Downing Street press briefing.

Stephane Bancel, chief executive at Massachusetts-based Moderna, said he expects the highly-evolved coronavirus variant to cause a ‘material drop’ in the effectiveness of existing vaccines, warning that the result was ‘not going to be good’.

He warned that it will take until summer 2022 for Moderna to develop a new vaccine and scale up manufacturing to vaccinate entire populations.

Scientists say it will take two weeks to truly work out how effective jabs are against Omicron, which has twice as many mutations on its spike protein as Delta.

The strain is expected to make current vaccines significantly weaker at preventing infections, but it’s less clear how it will impact hospitalisations and deaths is still unknown.

Dr Harries today told BBC Radio 4’s Today programme that the advice from the Scientific Advisory Group for Emergencies (SAGE) ‘has shown that if we have significant surges in Covid cases, then actually working from home is one of the key ones to implement and that’s why it is in Plan B’.

‘But it’s probably worth just thinking through at the moment; although I’m sure we will have more cases announced, we do only have five confirmed cases (of the new Omicron variant in England) and 10 highly probable at the moment.

‘So it’s a very early stage for this, I think, but certainly, if we see surges, then working from home will be a good thing to do.’

She said the current understanding is that the booster will ‘shoot up your immunity levels and so getting that high background level of immunity on a population basis may, to some extent, counter the reduced effectiveness against this particular variant’.

She added that there is a need to ‘be really careful about interpreting the data’ after suggestions from South Africa that the variant is causing mild illness, saying that the UK has an older population, with an average age of 41, compared with 27 in South Africa.

It comes after Health Minister Gillian Keegan today insisted it is better for the UK to ‘overreact than underreact’ to the new Omicron coronavirus variant after Joe Biden told the US the mutant strain is ‘not a cause for panic’.

Ms Keegan said ministers are trying to strike the right ‘balance’ in the response but she admitted it is a difficult judgment to make because there are many ‘unknowns’ associated with the variant.

Meanwhile, Ms Keegan insisted ‘Christmas is on track’ amid fears the Omicron variant could result in more people having to self-isolate over the festive period.

Last night US President Mr Biden said that ‘this variant is a cause for concern, not a cause for panic’.

His comments prompted scrutiny of the UK’s response, which has seen ministers roll out three main curbs to buy scientists some time as they race to analyse the new variant and assess how effective existing vaccines will be against it.

Ms Keegan was asked during an interview on Sky News if the UK is in danger of overreacting. 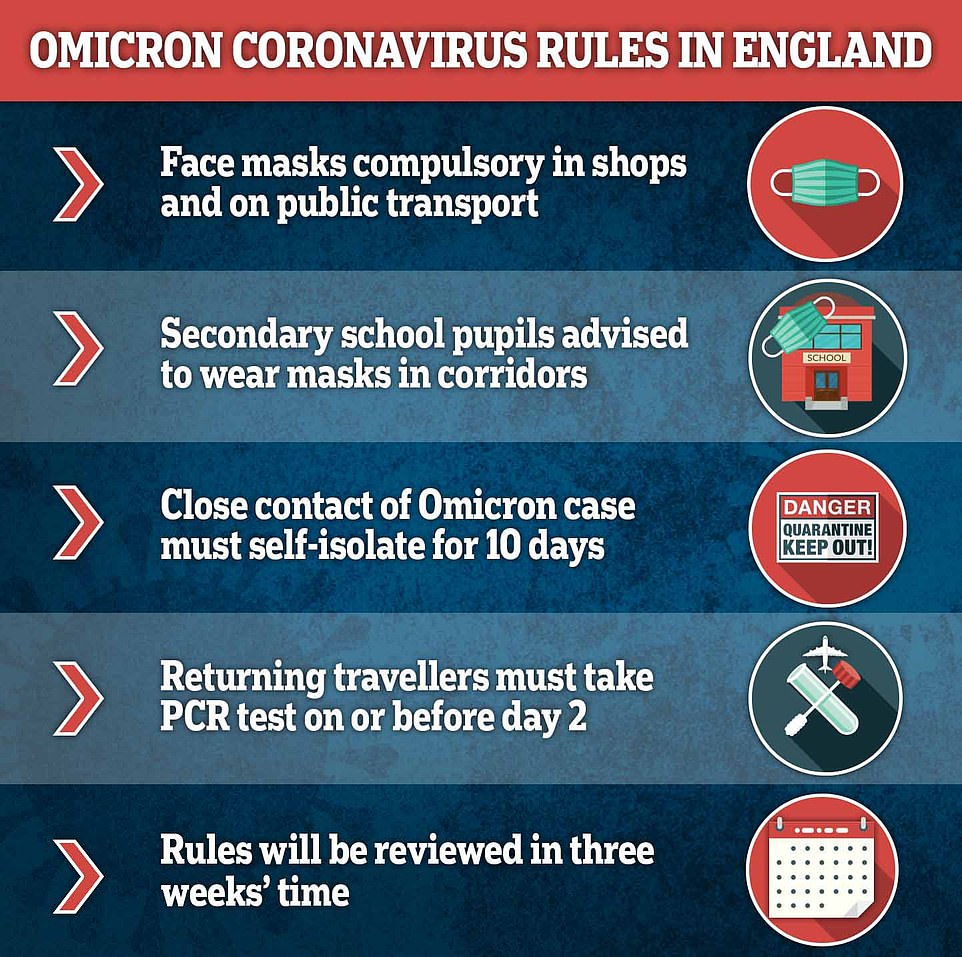 She replied: ‘We are trying to get that balance and proportion and it is difficult because it is unknown so we need to buy some time so our scientists can work with the world’s leading scientists to just basically figure out, we know it is very transmissible by looking, but we don’t know whether it’ll work with the vaccine, the vaccine will work, or the other treatments etc.

‘So the scientists do need some time for that. We think we have got the balance and the proportional response to it.

‘But we will review it in three weeks, that will give the scientists enough time to hopefully give us some insights then.’

Told that it could subsequently become apparent that the UK has overreacted, Ms Keegan said: ‘I would rather overreact than underreact at this point.

‘I think we have been here so many times that, you know, we have got this fantastic wall of vaccine now, we want to keep that, we want to strengthen it.

‘We would rather be stronger to be able to face any new variants and I think we have all the things, all the capability to do that, so that is what we would rather do.’

The new self-isolation rules for people identified as a close contact of an Omicron case has sparked concerns of a potential ‘pingdemic’ at Christmas, should the variant surge in the UK in the coming weeks.

Told that the restrictions could result in more people being unable to see their family over the Christmas period, Ms Keegan said: ‘Obviously you could be self-isolating over Christmas. You could be. But what we are hoping is we keep these cases, obviously everybody is going to be contacted, people will start the isolation.

‘With or without this you could be isolating for Christmas, with another variant.

Ms Keegan said that Christmas will ‘hopefully not’ be ruined, adding: ‘Let’s be proportional and balanced as we are trying to be, we have got five cases today, that will go up I am pretty sure, but what we are trying to do is really clampdown on that as much as possible.’

Asked about the prospect of Christmas plans being called off, Professor Paul Moss, from the Institute of Immunology and Immunotherapy at the University of Birmingham and SAGE member, told Sky News: ‘I don’t think we need to worry too much about that at this stage… the measures that we got in place have a good chance of gaining some control here.

‘The two ways that we’re adopting to try and control this are: one, in behavioural change to reduce transmission: the travel restrictions; more lateral flows; masking.

‘And the second big factor is the immunity and we know that we may lose some immunity with this virus. So what is happening is we are boosting our immune levels to super-high levels with the plans that were introduced yesterday, and that should retain some protection.

‘What we’ve seen with Covid is that things change very rapidly. And I think we need at least three weeks to assess this.

‘We need excellent epidemiology and within the laboratory people are testing the resistance of the virus against vaccinated samples. So we will need that sort of time. And we will know a lot more before Christmas.’

He added: ‘You probably saw that the doctor in South Africa who initially identified it had seen relatively mild cases, which is very encouraging. However, you know, that’s a much younger population.

‘It’s the elderly population, we need to worry about – in South Africa only 6% are above 65 years whereas we’ve got a much higher proportion.’

NBA: LeBron James’ Latest Obsession To Be Like Michael Jordan

Why are so few ‘unicorns’ born in Europe? | Future Forum

Why are so few 'unicorns' born in Europe? | Future Forum