A 10-year-old boy whose parents thought he had gastro is in the fight for his life after being diagnosed with a devastating brain tumour.

Luca Amery, from Ballina, NSW, was holidaying with his family in Thredbo during the Christmas break last year when he tumbled off his bike and fell two metres to the ground.

He immediately jumped back up and the family continued their day of mountain-biking, but later that evening he would not stop vomiting and his speech and walking became impaired.

His parents Sarah and Phil initially thought he might have gastro, but they grew more concerned over the next few days when his condition did not improve, subsequently booking him in to see a doctor on January 13.

But two days before the appointment, his parents realised something was seriously wrong when he tripped over a broom and could not get back up. 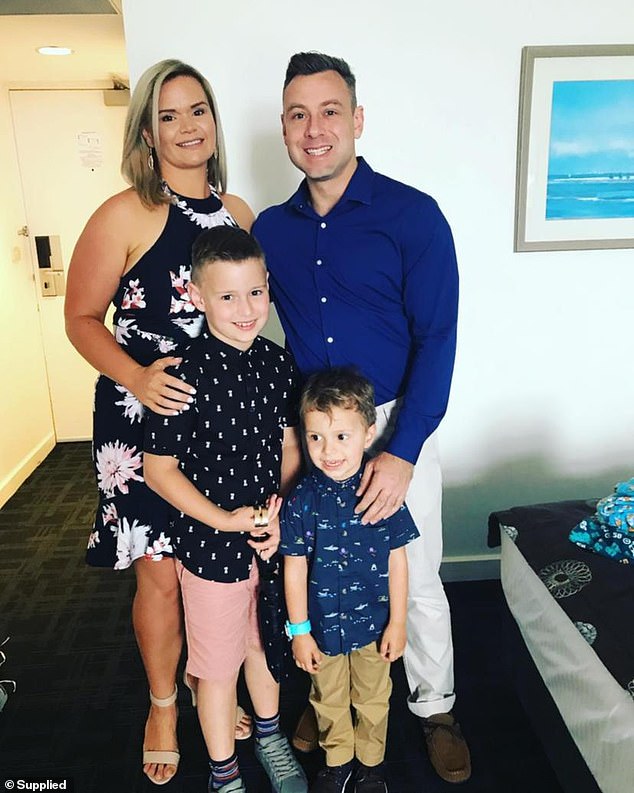 Luca Amery (pictured with his mum Sarah, dad Phil and brother Dylan) was diagnosed with a brain tumour after falling off his bike

‘His eyes were rolling back in his head. I looked at my husband and we both just went “something is not good here”,’ Ms Amery told 7NEWS.

Concerned he may have a delayed concussion from the fall in Thredbo, the couple rushed Luca to Lismore Base Hospital for further testing.

There, they received the devastating news – Luca had a tennis-ball sized tumour, about 5cm to 6cm big inside his skull.

‘They took him in for a CT straight away, then the doctor walked in and had to take us out of the room to tell us: “We’ve found a mass on his brain, the helicopter is coming from Brisbane right now”.’

Luca was later diagnosed with grade 4 medulloblastoma, a brain cancer which symptoms include problems with walking, balance, and fine motor skills.

In Brisbane, he was rushed into emergency surgery to remove pressure on his brain as the growing tumour had caused a build up of cerebrospinal fluid. 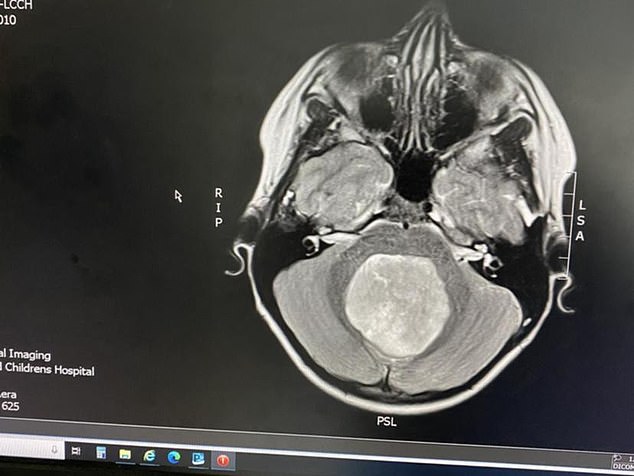 Doctors found a grade 4 medulloblastoma (pictured), around the size of a tennis ball, inside Luca’s skull 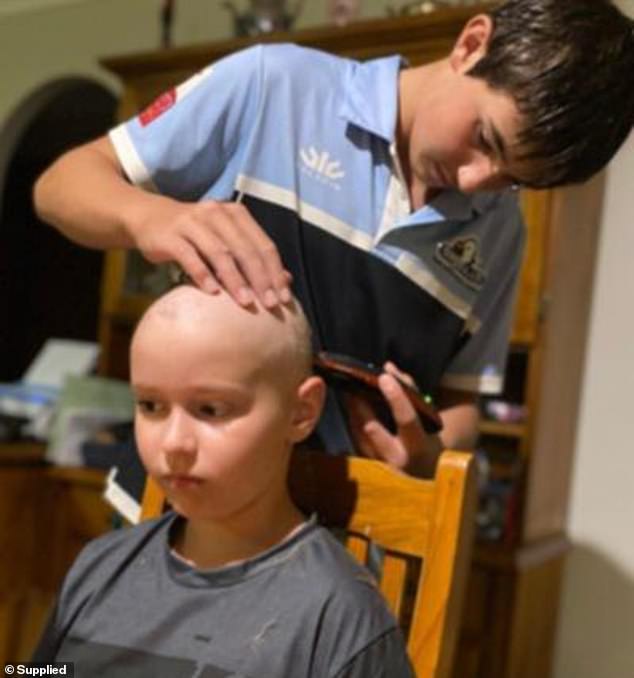 Luca has mutism, and permanently damaged eyesight since his brain surgery. He had his head shaved prior to undergoing radiotherapy

The parents were told the ventricles were pushing his brain into his skull, putting him at risk of having a stroke or an aneurism – and if they had waited any longer to drain the fluid, they would have lost their son.

But the Amerys’ were dealt another heartbreaking blow when doctors conducted an MRI during the operation before they started to remove the tumour.

The cancer had grown into his brainstem, meaning they would be unable to remove all of it and their little boy would have to undergo six weeks of radiation and seven rounds of chemotherapy.

Luca has just finished radiation and will begin chemotherapy in four weeks, which is due to end in December.

But the family have been warned there is a less than 50 per cent chance of beating it and relapse is almost inevitable. 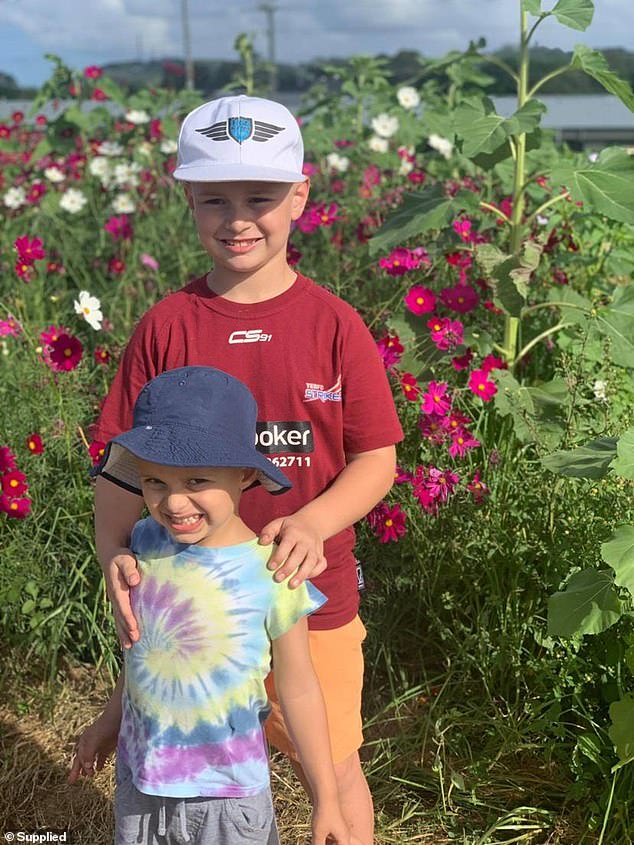 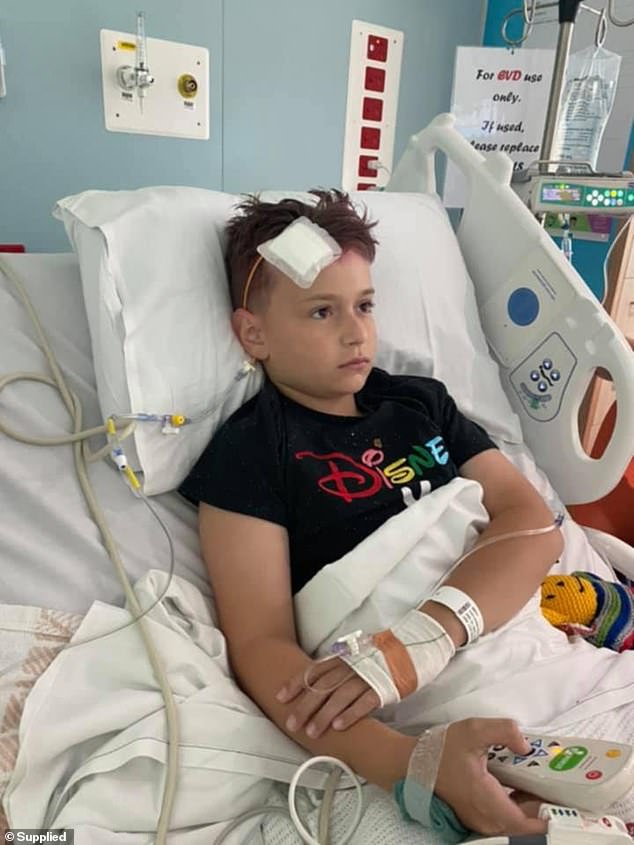 Since the operation, the once-active little boy who loved soccer, basketball, and mountain-biking is in a wheelchair, has mutism, and permanently damaged eyesight.

Although Ms Amery puts on her brave face in front of Luca, she breaks behind closed doors.

Through the heartache, she has been touched by the love shared by Luca and his younger brother Dylan.

‘Luca has been crying most days, his little brother put his hand on him the other day and goes, “if I had a rewind button I would press it for you, I know you just want to be normal again”,’ she said.

‘These two are inseparable. Dylan sleeps with him every night.

‘No matter how crazy it all seems to get he just gives Luca a hug or a hand on the shoulder and tells him it’s going to be ok.’

A GoFundMe page has been set up to help support the Amery family during this time, with accommodation, medical bills, general living costs, care for Dylan, and rehabilitation down the track.

A website has also been launched for those who wish to keep up to date with Luca’s story and future fundraisers.

‘We have been blown away by the support we have seen by everyone,’ she said.