By Billie Thomson For Mailonline

This is the heart-breaking moment a six-month-old puppy tries to wake up its dead sibling by digging into the soil after seeing it being buried by their owner.

The two pets, adopted by a man in China four months ago, had spent every day together until one of them was accidentally killed by a car this week, according to a report.

Touching footage shows the faithful dog desperately attempting to remove the mud on top of its deceased sibling half buried in the soil. 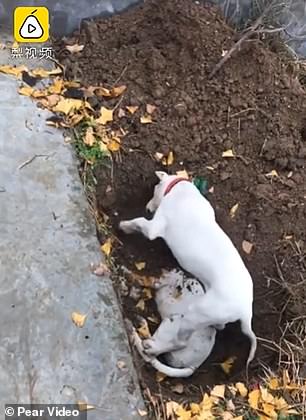 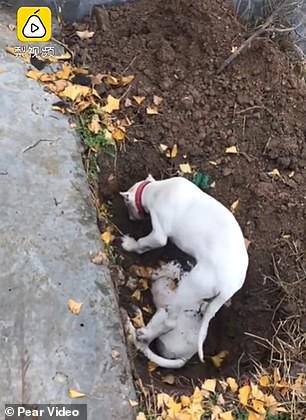 Touching footage shows the faithful dog desperately attempting to remove the mud on top of its deceased sibling half buried in the soil in the city of Xi’an, north-western China, on Tuesday

The video was filmed on Tuesday in Xi’an in north-western China’s Shaanxi Province by the dogs’ owner, Mr Tong, according to news video outlet Pear.

Mr Tong said that he was trying to bury his dead pet in the ground when his other dog suddenly jumped into the hole and wouldn’t stop digging – as if he wanted to wake up his sibling.

The owner said that he adopted the dogs, believed to be Dogo Argentinos, when they were about two months old.

He claimed that he forgot to close the front door properly the night before, causing one of them to escape from his home. 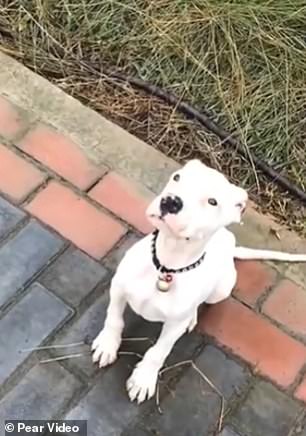 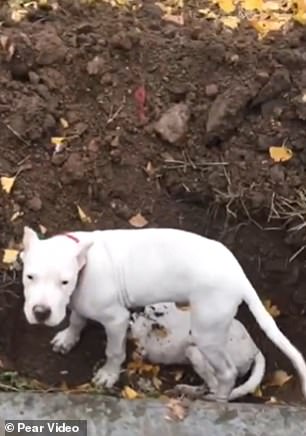 Their owner, Mr Tong, said he was trying to bury his dead pet (left, picture before the accident) when his other dog suddenly jumped into the hole in the hope of waking up his sibling (right)

The man received a phone call early Tuesday morning from a security guard who worked nearby. He was told that his dog had been hit and killed by a car overnight.

‘The security guard transported the dog’s corpse to me, and I dug a hole to bury it,’ Mr Tong said. ‘The other dog started to dig in the hole. I was very moved by it.’

He said his remaining dog seemed depressed after realising that its sibling had died. ‘It is less active than before,’ he sighed.

The clip has sparked controversy on social media after being uploaded onto Weibo, the Chinese equivalent to Twitter. 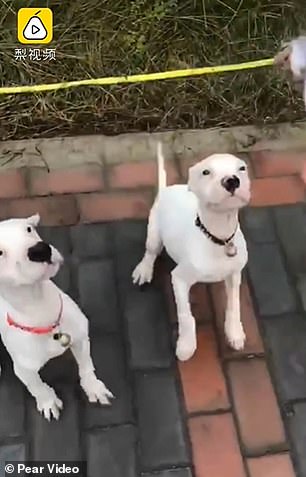 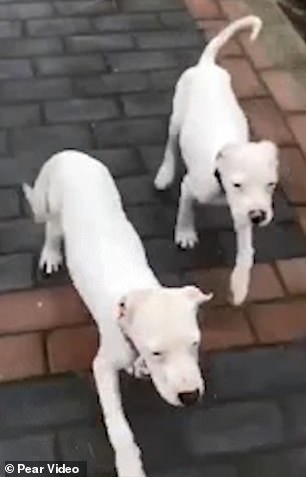 The clip has sparked controversy on social media with many people criticising Mr Tong for keeping ‘large, violent’ dogs and letting the pups go around without wearing leads (pictured)

Some viewers were touched by the scene, such as one who wrote ‘dogs are affectionate animals’.

The authority of Xi’an, where Mr Tong lives, banned its residents from raising Dogo Argentinos, along with 33 other dog breeds, last year after deeming them ‘aggressive’.

In reference to archive footage of the two puppies running around without leads, one such commenter said: ‘How he dare gain pity like this after letting violent dogs run on the loose?’

Multiple cities in China have set new rules and policies to forbid their residents from keeping large dogs as pets. Authorities claim the move could improve public safety and ease the tension between those who have pets and those who don’t.

Brexit: Is there enough time left to ratify a UK-EU trade deal even if one is agreed?

Shefki Kuqi in contention for Kosovo under-21 manager’s job

Shefki Kuqi in contention for Kosovo under-21 manager's job