The heartbroken parents of a hero who died trying to save a woman from the Thames have paid tribute to him as a ‘good soul’.

The father of the 20-year-old Folajimi Olubunmi-Adewole, who was known as Jimi, said he wants his son’s sacrifice to be recognised.

Jimi dived into the Thames to rescue a woman in the water while he was walking home from work at around midnight on Saturday.

The woman and another man who had also jumped into the water were rescued by the Coastguard and the Metropolitan Police’s river unit. Jimi’s body was found six hours later.

In an interview which left Susanna Reid tearful, Michael Adewola told ITV’s Good Morning Britain: ‘I want the Government to honour him.’

A campaign has been launched to recognise Jimi’s bravery with the George Cross – Britain’s highest gallantry award available to civilians.

Mr Adewola also thanked everyone who has supported a GoFundMe page set up to help the family – which has so far raised more than £100,000. 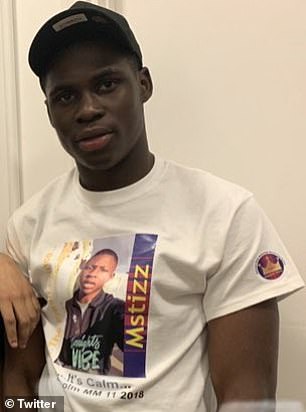 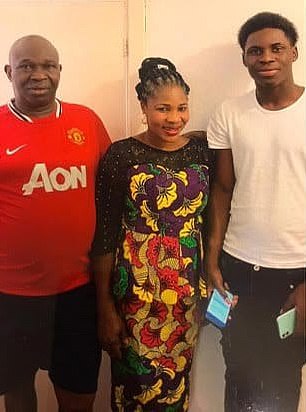 The family of Folajimi Olubunmi-Adewole (left and, right, with his mother and father) who died trying to save a woman from the Thames have urged the Government to honour his memory 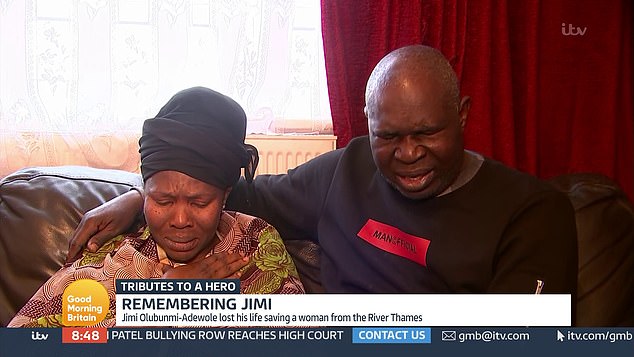 Mr Adewola described him as ‘the breadwinner of the house’ who was ‘always taking care of me and my wife and his friends’.

It comes as a campaign was launched to recognise Jimi’s heroics with a posthumous George Cross – an award that recognises the bravery of someone who puts themselves in danger to try and save someone’s life.

Appearing alongside his parents on GMB this morning, Jimi’s best friend Bernard Kosia recalled the moment he knew Jimi was ‘adamant’ he had to help. 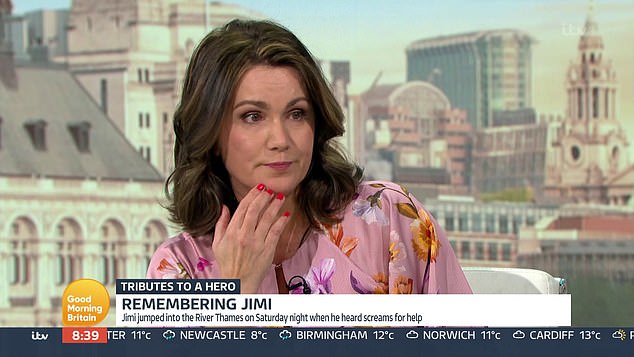 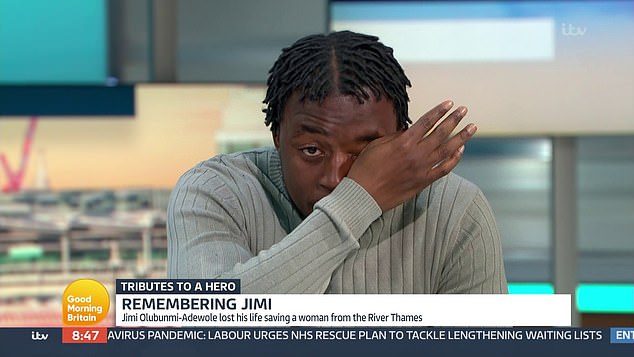 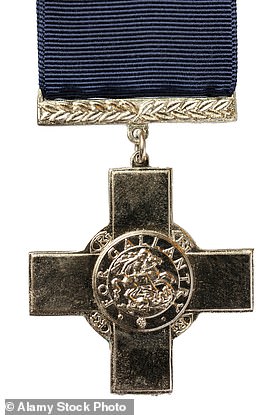 The George Cross for gallantry

The George Cross is the highest civilian award bestowed by the government.

It is awarded ‘for acts of the greatest heroism or for most conspicuous courage in circumstance of extreme danger’.

Posthumous awards have been permitted since it was created in 1940 and are usually presented to the next of kin by the monarch at Buckingham Palace.

The GC can be awarded to military personnel for actions which are not in the face of the enemy.

The last civilian to be awarded the George Cross was Major Dominic Troulan – a retired Special Forces veteran who saved more than 200 people during a terrorist attack in Kenya.

Other examples of civilian recipients include teacher John Clements who lost his life rescuing children from a hotel fire during a school trip to Italy in 1976.

The friends were on their way home from working at a restaurant at about midnight when they were alerted by two men on London Bridge that a woman had fallen in.

The pair went on either side of the bridge to see if they could see the woman in the water but when they were unable to see her, Jimi became determined to rescue her himself.

He told the ITV programme: ‘Jimi was adamant, for some reason, that he didn’t care (about himself). He didn’t think twice as to what was going to happen.

‘I just remember him saying ‘Bernard, I have to save her, I’m going to save her’.’

He said: ‘Jimi means a lot to everyone. Especially around south London now, everyone knows him as a neighbourhood hero.

‘To risk your life in such a way, you don’t see that every day.

‘And the fact that he was adamant to save that woman, it just shows his nature and his mindset.’

Recalling their last conversations before the incident, Mr Kosia said his friend had spoken about his family and told him he loved him.

He said: ‘They (our conversations) were just always about family, loved ones, what we have to do for them to make sure that they’re OK.’

He added: ‘We started joking around and I just remember Jimi looking at me like ‘Bernard, you know I love you, right?’

Describing being alerted to the incident at London Bridge, he said they were approached by two men who showed them a video of a woman ‘jumping over the bridge’.

He said they called 999 and heard a woman shouting ‘I’m dying, I’m dying’ but could not see anything because it was ‘pitch black’.

Jimi and the third man then both jumped into the water and asked Bernard to wait for the police.

Bernard added: ‘I couldn’t see Jimi anywhere but I could hear him shouting my name.

‘But the shout wasn’t normal – he was in pain.’

Susanna Reid, who grew emotional during the segment, told viewers about the campaign to award Jimi with a posthumous George Cross and added: ‘Jimi was a hero. He deserves to be honoured in that way.’

As a heartbreaking video of Jimi aired, Susanna stopped speaking as her voice cracked, saying: ‘That was Jimi with all his life force.’

‘That’s how you want us to remember him,’ she added.

At the beginning of Tuesday’s show, Susanna urged viewers to sign a petition for Jimi to receive the George Cross medal.

Tributes are continuing to pour in for Jimi who has been described by family and friends as ‘much-loved’ and a ‘true hero’ and praised by authorities for his actions.

Vivek Singh, chief executive and executive chef of The Cinnamon Club, where Mr Olubunmi-Adewole worked, joined those in paying tribute, saying he was ‘diligent, kind and passionate’.

‘We are absolutely devastated and are trying to come to terms with the tragic death of Folajimi Olubunmi-Adewole,’ he said. 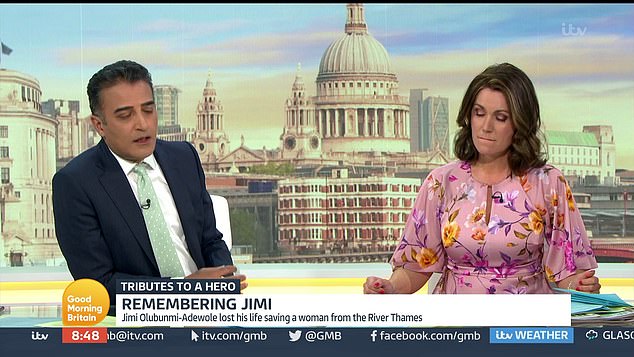 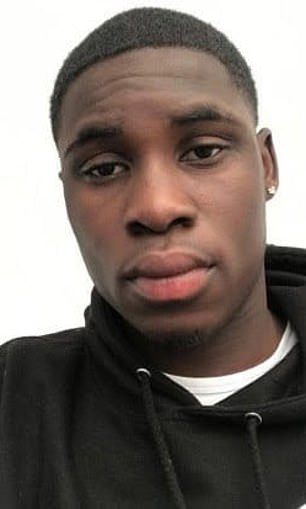 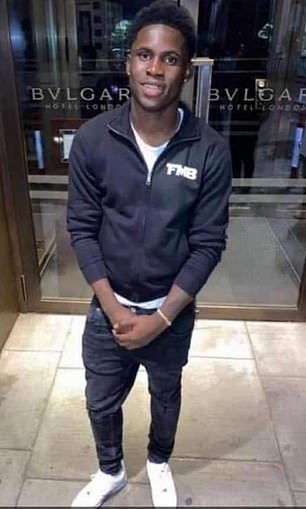 ‘Jimi, as he was known to everyone at The Cinnamon Club, was a much-loved member of the front of house team and we are all reeling from this incredibly tragic news.

‘He worked with The Cinnamon Club for over the year and was a diligent, kind and passionate young man, a real team player.

‘What he did was a tremendous and selfless act of bravery, to save the life of a complete stranger.

‘He will be remembered as a true hero.’

City of London Police previously said two men had entered the water after witnessing a woman fall from the bridge.

The Coastguard and the Metropolitan Police’s marine unit rescued the woman and one man, but could not locate the other.

A body was found at 6am on Saturday morning, police said, which has now been formally identified as that of Mr Olubunmi-Adewole.

A City of London Police spokesperson said: ‘The body of the young man who heroically jumped into the Thames on Saturday morning to save the life of a woman has today been formally identified as Folajimi Olubunmi-Adewole.

‘A second man and a woman, who were rescued by the Coastguard, were taken to St Thomas’ Hospital and have since been discharged.’

He said: ‘The circumstances of this incident are extremely tragic. We continue to support the family of this heroic young man who heartbreakingly lost his own life trying to save that of another.’

Mr Olubunmi-Adewole’s family earlier described him as ‘the deepest and most wonderful man’ and said that he deserved a ‘medal’ for his bravery.

His father Michael Adewola, 63, told The Sun newspaper: ‘(Jimi) is a very unique and angelic soul, and I am proud of him, so proud.

‘I want the world to know he is the deepest and most wonderful man.

‘He is a hero, and always will be, I can’t bring him back but I want him to be remembered forever for what he did, it was just like him to want to always try and help others.’

A GoFundMe fundraiser to support Mr Olubunmi-Adewole’s family has passed £70,000, almost three times the £25,000 target, with more than 4,000 people donating towards the funeral costs and support for the family.

Commenting on reports of Mr Olubunmi-Adewole’s death, London Mayor Sadiq Khan said he ‘was the best of us’.

Mr Khan added: ‘A true hero of our city who gave his life trying to save another.’

Home Secretary Priti Patel tweeted: ‘A truly selfless act of heroism from a brave young man who gave his life trying to save the life of another.

‘My thoughts are with Folajimi Olubunmi-Adewole’s family and loved ones at this heartbreaking time.’

See remote Western Australia from afar with this photo tour

See remote Western Australia from afar with this photo tour