An engaged couple who surprised their quarantined friend with a touching request have warmed hearts on social media.

The unidentified lovers spelled out ‘Maid of Honour?’ in the grass of Hyde Park directly across from the front entrance of the Sheraton Grand in Sydney’s CBD.

The five-star hotel is currently being used as a quarantine facility for returned Australian travellers, who must spend 14 days in managed isolation and produce a negative Covid test on day 12 before they are released.

A photo of the handmade sign was captured by Moita Lindgren, an Australian citizen who recently flew home from the US. 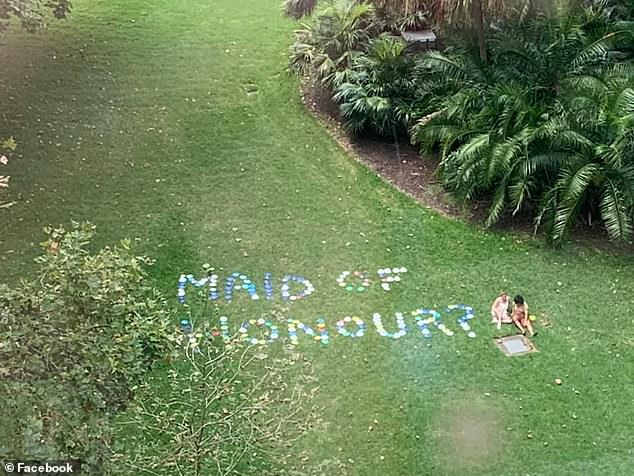 An engaged couple (right) surprised their friend in hotel quarantine by asking her to be the maid of honour at their wedding with this handmade sign laid out in Hyde Park, Sydney

Ms Lindgren, who has been in quarantine at the Sheraton with her 19-year-old daughter since arriving from Los Angeles on Monday, February 8, told Daily Mail Australia it’s lovely to see Australians supporting their loved ones in quarantine.

‘I know this couple is here to lift their friends spirits, but it sure brightens the day of so many others too,’ Ms Lindgren said.

Her picture, which has garnered 106 ‘likes’ since it was uploaded to Facebook on Wednesday morning, sparked some delighted responses with comments including ‘awesome’ and ‘my heart’.

‘Oh my god this is adorable,’ one man replied.

‘Awww what an amazing surprise,’ added a second, while a third wrote: ‘That’s so lovely.’

‘So sweet! We watched lots of wedding photos being taken there,’ said a fourth.

Others in quarantine at the same hotel said they wished they’d been lucky enough to get a room with a view.

‘So jealous you’ve got a view of the park, I’m facing buildings,’ one woman wrote.

The International Criminal Court was subjected to accusations - RT Arabic