Heathrow arrivals are forced to wait for FOUR hours

Pressure was growing on Grant Shapps and Priti Patel today over the continuing border chaos at Heathrow, with arrivals forced to wait for four hours as pregnant women, pensioners and young children wilted in the queue while e-gates ‘stood empty’.

The latest pictures taken yesterday showed snaking lines of frustrated passengers waiting to enter the UK, in scenes that are now wearily familiar due to Border Force failing to tackle an issue that has been going on all summer.

Today former Tory leader Iain Duncan-Smith called the situation ‘madness’. He told MailOnline: ‘We are going to achieve the worst of all worlds by having people close together who may have Covid. The whole thing is chaotic and we still haven’t fully opened up yet. We don’t seem to have a plan for how we are going to manage that.

‘If it carries on like this Heathrow will cease to be a hub airport and Britain will be left in the backwash as an irrelevant country. Having already jabbed such a large percentage of the population we have to get on with things.’

James Gray, MP for North Wiltshire, asked: ‘What the hell is going on? This is totally unacceptable and I find it deeply embarrassing that the United Kingdom in the 21st century cannot get people into Britain faster than this.’

There have also been widespread complaints about British Airways operations at Terminal 5 and the management of the airport as whole, with passengers reporting lengthy delays to disembarkation and luggage pick up. Arriving planes are also queueing on the tarmac for up to an hour waiting to be assigned a gate.

The latest bout of queueing chaos began on Sunday and has been repeated every day this week. But the Home Office – which has repeatedly pinned the problem on understaffing – has maintained an unapologetic stance despite widespread fury from the public and senior travel industry figures.

A spokesman said earlier this week that travellers would ‘need to accept’ increased wait times due to high summer demand and the need to check Covid documents. 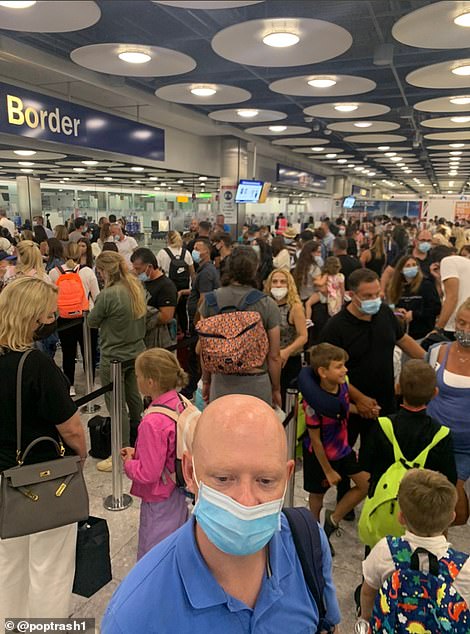 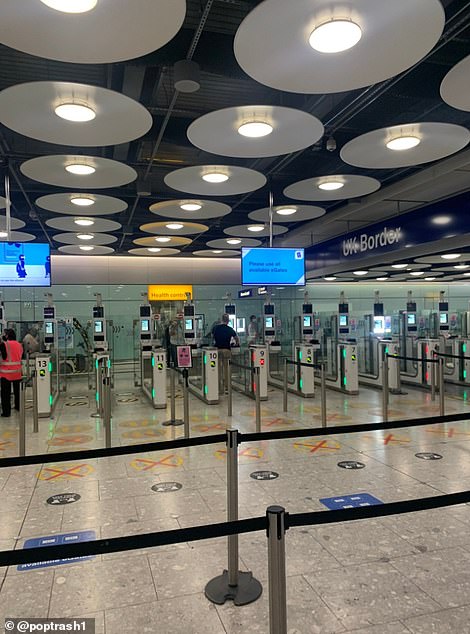 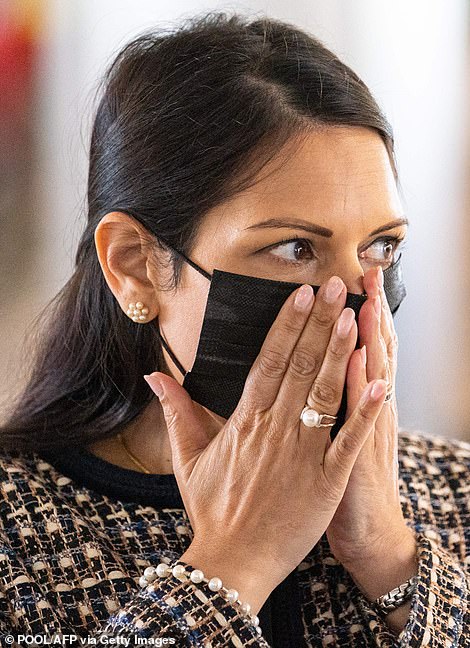 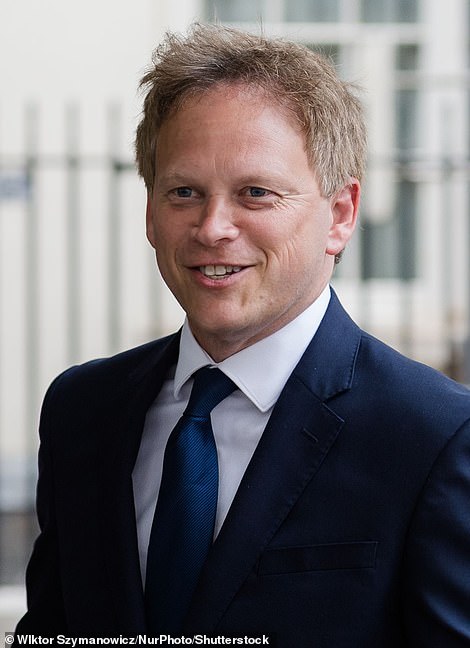 One passenger tweeted yesterday: ‘Chaos at Heathrow airport Terminal 4. Four hrs waiting to go through immigration. Families with children, pregnant ladies & old folks everyone had to wait. Is that human?’

Are you queuing at Heathrow today?

A second wrote: ‘Passport control at Terminal 5: Empty e-gates. Yet families with kids under 12 have to queue for 2 hours. Two desks open to UK citizens, kids and babies are screaming #disgrace.’

‘Chaos at Heathrow airport Terminal 4. Four hrs waiting to go through immigration. Families with children, pregnant ladies & old folks everyone had to wait. Is that human?’

Under-12 cannot use e-gates due to limitations with the facial recognition technology, meaning families with young children have to use manned desks.

Today Iain Duncan-Smith urged the government to come up with a new solution to the chaos, saying Border Force could remove the need to spend time processing Covid paperwork by introducing sniffer dogs trained to detect Covid.

‘The NHS has already done phase one of a trial for medical detection dogs, which has shown they are already almost at the level of a PCR test when it comes to Covid,’ he said.

‘That would indicate who has it immediately, at which point they can be taken out of the queue and sent for a full PCR.

‘But the NHS, having done the first phase of the trial, has now refused point blank to do the second phase at airports. We are seeing these queues now but this trial has been completed months ago.

‘They could easily by now have dogs deployed at airports very accurately detecting Covid but the NSH has failed to complete the trial.’

North Wiltshire MP James Gray called for Border Force officials to be hauled in front of a select committee.

He told MailOnline: ‘People coming into the country who aren’t British must have had the most appalling experience.

6’People know when flights are coming in so it can’t be acceptable that there are only two guards on duty.

‘We need to get Border Force in front of the select committee and the government to do a review of Border Force per se.

‘And ridiculous carry on with e-gates is farcical. E-gates have been around now for years. Why haven’t we sorted it?’ 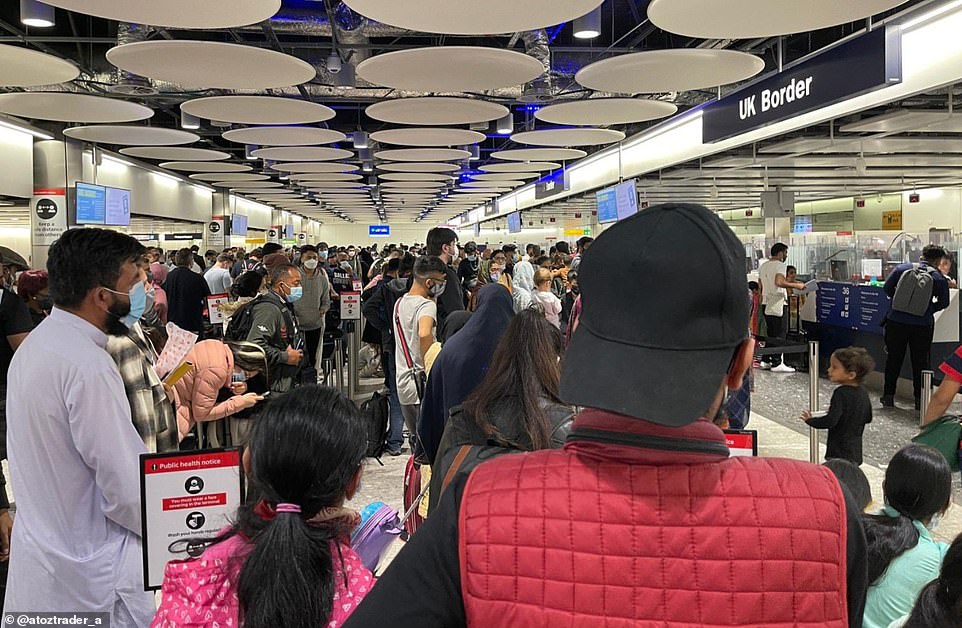 An image taken by a second passenger yesterday. The latest bout of queueing chaos began on Sunday and has been repeated every day this week

Heathrow’s summer of queuing chaos: So when WILL the government get a grip?

May 17 – Passengers flying into the UK faced ‘bedlam’ at the border with some facing a three hour wait at the Heathrow passport gates. Travellers told MailOnline how they were ‘terrified of catching Covid’ while being crammed into the airport’s border hall this morning.

July 20 – 90-minute queues were seen at arrivals after the government failed to update Passenger Locator Forms ahead of its ‘Freedom Day’ rule changes – resulting in double-jabbed Britons being rejected at e-gates.

August 2 – Queues of passengers stretched the entire length of Terminal 5. Officials again blamed staff having to self-isolate. A spokesman quoted figures showing that one in four Border Force guards were reported to be off sick with Covid or self-isolating.

29 – Three-hour waits were reported at passport control. A day later the Home Office risked fury as it said passengers ‘need to accept’ the risk of delays at peak times.

30 – One passenger describes the immigration process in Terminal 2 as ‘incompetent and ridiculous’, adding that he was forced to wait for more than five hours with ‘no water, no bathroom’

31 – One traveller wrote on Twitter that a queue for families with children had lasted three hours.

September 1 –  Pictures and video from around midday showed long snaking lines of travellers packed closely together with no social distancing, as some aired themselves with leaflets in an attempt to stay cool.

2 – Yet more chaos with waits of up to four hours.

On Wednesday, journalist Guy Faulconbridge compared the scenes that met him after touching down in the UK to the dying days of the Soviet Union.

He tweeted a picture taken two hours into the queuing process, with hundreds of people still in front of him in the line.

On Tuesday, one traveller wrote on Twitter that a queue for families with children had lasted three hours.

Another described the wait for families as ‘shameful’, adding that the UK ‘must be the only country which treats families worse than adults’.

On Monday a passenger said the immigration process in Terminal 2 was ‘incompetent, ridiculous’, adding that he was forced to wait for more than five hours with ‘no water, no bathroom’.

It went on: ‘Waiting times at the border have on occasion been unacceptable and we have called on the UK Government to address the problem as a matter of urgency.’

He said: ‘As the world continues to open up safely, it is essential that there is enough staff and support at all points of a journey.

‘The travel experience needs to be as frictionless and consistent as possible to give all travellers the confidence they need to return in large numbers.’

Jacqueline Dobson, President of Barrhead Travel, which describes itself as the UK’s leading independent British travel agents, said: ‘From a visitor perspective, arriving into Heathrow is the first impression many will get of the UK – and first impressions matter.’

The issue has been exacerbated by a shortage of Border Force agents and many going into self-isolation for Covid.

But earlier this week a senior Tory MP insisted the issues should have been addressed ‘a long time ago’.

‘This has been a constant problem throughout the pandemic and I appreciate the Home Office may have had difficulties recruiting to the Border Force but that is not a new problem,’ the MP told MailOnline.

‘They should have addressed this a long time ago. It adds to travel uncertainty and it is not good for the travel industry or the travelling public. The Border Force needs to be better organised.’ 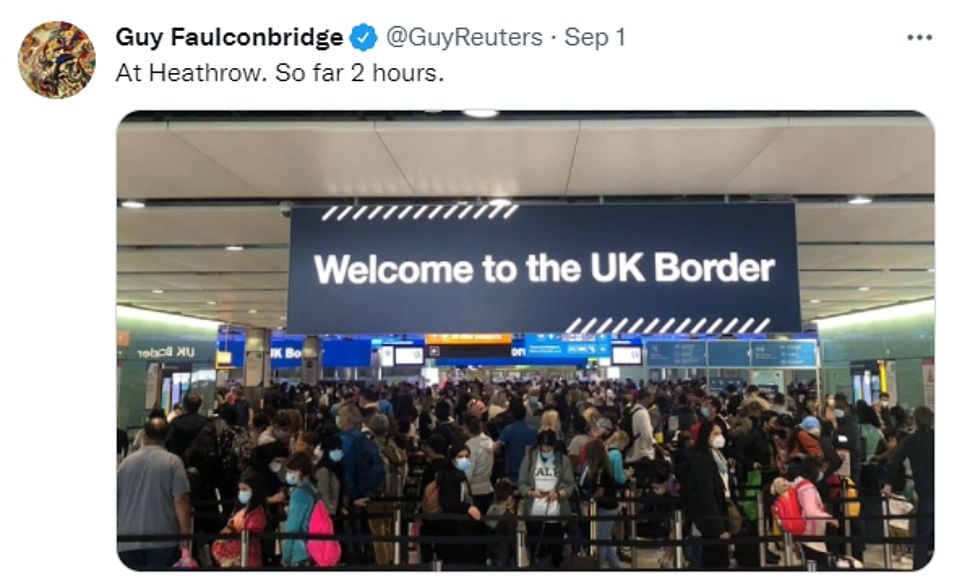 On Wednesday, journalist Guy Faulconbridge compared the scenes that met him after touching down in the UK to the dying days of the Soviet Union

A Home Office spokesman said: ‘Our utmost priority is protecting the safety and health of the public and we will never compromise on security, and on ensuring passengers are compliant with the current health measures, which means passengers will need to accept an increase in the time taken to cross the border.

‘The rollout of upgrades to our eGates to automate checks for health requirements is ongoing, with many eGates already in operation and more to be added over the coming months to increase automated checks on passengers at airports.

‘However, for safeguarding reasons families with children under the age of 12 are not permitted to use the eGates.

‘Where there are high volumes of families with young children, such as over the summer holidays, Border Force may dynamically deploy resources to frontline desks instead and we continue to flexibly deploy our staff to make the process as smooth as possible.’

$DOG Tokens are out, and the demand is pushing Doge (DOGE) meme NFT’s price