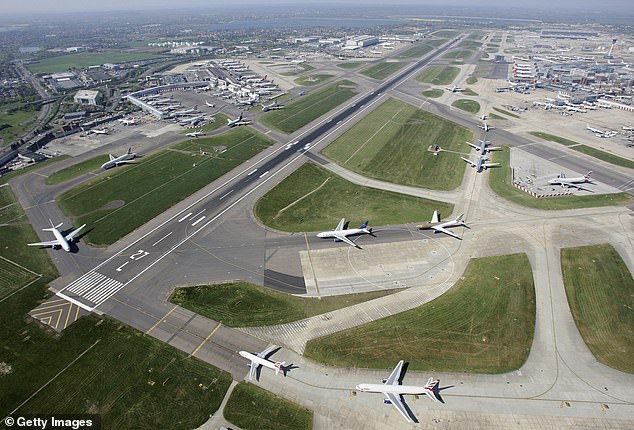 Heathrow staff are set to walk out tomorrow in the first of four strikes over ‘savage’ pay cuts as the aviation sector endures the worst crisis in its history.

Members of the Unite union, including firefighters and security staff, planned the 24-hour strikes following a dispute over what union bosses described as the west London airport’s ‘brutal fire and rehire programme’.

A further one-day strike is planned for December 14, followed by a two-day stoppage on December 17 and 18 – around the time that experts forecast will see a flurry of flights as people head abroad for Christmas.

A spokesperson for Heathrow told MailOnline said no flights have been cancelled as a result of tomorrow’s strike, and the airport said it does not expect ‘any disruption’ to passenger journeys. They added that Heathrow’s government-approved contingency plans ‘will keep the airport open and operating safely’.

It comes after Heathrow reported an eye-watering £1.5billion this year so far due to the pandemic and Covid-19 shutdowns, and announced plans to cut 500 jobs.

The airport, which lost its status as Europe’s busiest airport to Paris Charles de Gaulle, reported a fall in third-quarter revenues of 72 per cent, and expects passenger numbers of 22.6 million next year – less than a quarter of 2019 levels.

Heathrow’s chief executive John Holland-Kaye will be portrayed as the Grinch on Unite ads on the sides of vans, alongside the message: ‘Heathrow Grinch CEO is stealing workers’ wages’

Tomorrow, workers will stand in picket lines outside Unite’s Heathrow office, while an ad van will tour the surrounding areas with posters attacking the airport’s policies.

Heathrow’s chief executive John Holland-Kaye will be portrayed as the Grinch, alongside the message: ‘Heathrow Grinch CEO is stealing workers’ wages’.

Other posters will read ‘Heathrow’s super-rich shareholders are jetting off with workers’ wages’ and ‘Stop Heathrow’s billionaire-backed wage cuts’.

Unite opposes policies that they claim will result in workers suffering wage cuts of up to £8,000 per year – around 25 per cent of their take-home pay.

Its representatives accuse Heathrow bosses of ‘using the Covid pandemic as cover for forcing through long held plans to cut pay’ and force staff into ‘poverty’.

Unite regional co-ordinating officer Wayne King said: ‘Workers face losing their homes and surrendering their cars due to the savage cuts being imposed on them.

‘These cuts are all about greed and not need.

‘HAL and John Holland-Kaye are guilty of using the Covid pandemic as cover for forcing through long held plans to cut pay. If this was genuinely about the pandemic any cuts would have been temporary.’

In a statement, Unite added that it had tried to negotiate temporary pay cuts, but insisted that Heathrow ‘were simply not interested’.

A spokesperson admitted that the strike will ‘undoubtedly cause widespread disruption’ but that it was taken as an ‘absolutely last resort by members who simply can’t afford the cuts [Heathrow Airport] is imposing on them’.

The trade union has also claimed that Heathrow Airport will not be able to ‘operate safely’ while its members are on strike tomorrow.

Heathrow Airport said that they do not believe the strike action is ‘necessary’, and called the decision to strike during the pandemic ‘disappointing’.

It comes as Heathrow reported an eye-watering £1.5billion this year so far due to the pandemic and Covid-19 shutdowns, and announced plans to cut 500 jobs (file photo)

A spokesman added: ‘Our focus has been to protect jobs, which is why we’ve offered every frontline colleague who wants one a job at a market rate salary above the London Living Wage, even despite a loss of over £1.5billion to our business’.

Heathrow, which is owned by Spain’s Ferrovial, the Qatar Investment Authority and China Investment Corp, has been critical of government travel restrictions, which have laid much of Britain’s aviation sector to waste.

It comes as No10’s impact assessment of the new Tiering system suggested it is not possible to gauge the hit to the economy that further curbs will inflict.

Tory rebel ringleader Mark Harper complained that the information was being released too late, just 24 hours before MPs are due to vote on the restrictions.

‘This information is what Ministers should have been insisting on before they made their decisions so it surely could have been made available earlier,’ he said.