Racked by concerns for her newborn daughter’s safety, Gini Wilde was assured by her friends that her feelings were standard for a first-time parent.

That dread was so intense that she would not leave Scarlet — even lying safely in a pram — in a room where there were knives; she also could not rest until she’d checked, sometimes as many as ten times, that she’d shut the front door.

For months, doctors and friends told her she was ‘just an anxious first-time mum’ or a ‘helicopter parent’ — before the true diagnosis was made: she had a form of obsessive compulsive disorder (OCD), perinatal OCD, that comes on after a baby is born. 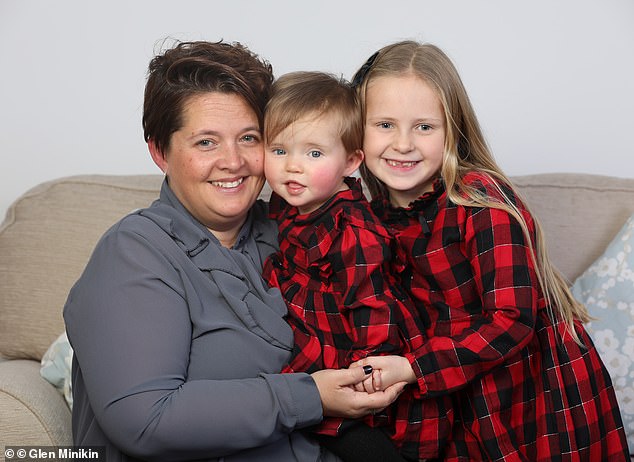 For a year Gina Wilde (pictured with daughters Scarlet and Nancy), 42, was racked by concerns for her first-born daughter Scarlet and was convinced she would come to harm

Experts believe many parents are, like Gini, labelled helicopter parents — someone who hovers over their children being overprotective — when they actually have OCD. And it can start soon after birth.

Perinatal OCD is different from postnatal depression, which often manifests in a sense of hopelessness and lethargy; instead, it involves extreme anxiety about the baby that goes beyond normal parental concerns and leads to persistent negative thoughts such as ‘what if I drop my baby’?

Symptoms include constant checking — handles, locks, taps, switches — and rituals such as closing doors in a certain order, or folding clothes in a particular pattern, or fearing ‘something bad will happen’.

Worrying that someone else, or even you, might harm your baby, is also an issue.

‘Those with maternal OCD have a sense that only they can keep their babies safe and that by being in control all the time, and only by doing things such as compulsions or rituals, they will keep their child safe,’ says Dr Angharad Rudkin, a child clinical psychologist at the University of Southampton.

‘The term ‘helicopter parent’ is unhelpful, as it can mask people who actually have OCD.’

Identifying and treating the condition is crucial. ‘It doesn’t tend to go away without help,’ adds Dr Rudkin. ‘It can last for years.

As your child grows, there will be enforced separation when they go to school. There is also a higher chance your child will have OCD if you suffer from it, so getting treatment is important for them and you. 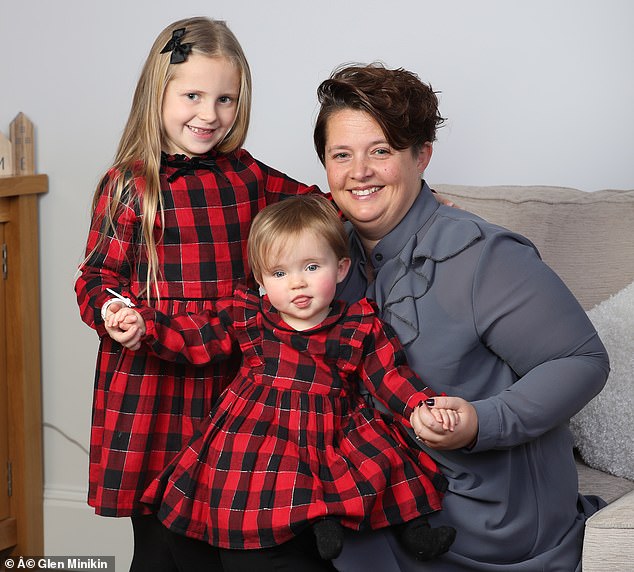 The mother was eventually told she had a form of obsessive compulsive disorder (OCD), perinatal OCD, that comes on after a baby is born

‘By being overprotecting and obsessively protecting the child, your child is unable to develop their own coping strategies and their resilience.’

Why some mothers develop it is not fully understood.

‘There’s a chance it is made more likely after a traumatic birth, but we also know there’s a genetic element and that women are slightly more likely to develop OCD,’ says Dr Rudkin.

‘The overwhelming sense of responsibility and tiredness that comes from having a new baby can heighten levels of anxiety in general, which could then tip into OCD-type behaviour.’

As is typical, Gini’s issues began within weeks of giving birth to Scarlet, now eight, by forceps delivery. Five weeks after the birth, Gini’s husband Richard, 40, a joiner, was involved in an accident at work and needed emergency surgery to his face.

A week later, when Scarlet was six weeks old, Gini realised she had a retained placenta — where the placenta stays in the womb — and had to return to hospital for surgery.

‘Richard’s accident, plus having to return to hospital, made me feel very anxious, worried and full of dread,’ she says.

Gini began constantly worrying about Scarlet. ‘I’d check the front door lock ten times,’ she says. ‘I had to do this or it meant someone could get in and harm Scarlet.

‘I began having a fear of knives. I used to be able to cook and use knives without thinking but, now, they were a weapon that could hurt Scarlet,’ she says.

‘I couldn’t leave Scarlet in a room for me to nip to the loo in case something happened to her.’

To get round this, Gini took Scarlet to the bathroom with her and never had her in the room when she was cooking.

Testing thousands of samples of tuberculosis (TB, a bacterial infection that affects the lungs) with different antibiotics may provide doctors with key information about how to effectively treat the disease.

Almost 5,000 people a year in the UK develop TB. And although the number of cases is falling, strains have emerged that are resistant to the standard six-month antibiotic treatment.

The BashtheBug citizen science project, set up by the University of Oxford in 2017, is analysing samples of the bacterium that causes TB, collected from up to 15,000 people globally who have been tested with 13 different antibiotics to see which work best.

Scientists and a computer program analyse the results and, if the results differ, citizen scientists are asked to analyse a photograph of the TB samples (after undergoing online training).

‘We find the volunteers are very accurate and consistent,’ says scientist Dr Philip Fowler, who runs the project.

‘We hope the project will identify the mutations in the TB bacteria that lead to antibiotic resistance. This will help doctors decide how best to treat people with TB.’

As months passed, she stopped cooking and eating regularly and lost weight.

Richard was sympathetic, as were most of her friends. ‘But other non-close mates suggested I was just an anxious new mum,’ says Gini. ‘No one believed my thoughts and anxiety were as bad as I tried to explain.’

When Scarlet was three months old, Gini asked her GP for help — only to be told she had ‘a spot of the baby blues’ and was prescribed antidepressants. Gini says: ‘I wasn’t depressed. I loved my baby. But I felt terrified something bad would happen to her.’

Gini took Scarlet to be weighed and to mother-and-baby groups. ‘But, at home, I’d stay in for hours, too terrified to leave,’ she says. ‘Richard once came home and found I’d put every kitchen knife in the bin because I was terrified of Scarlet being hurt.’

Gini deteriorated so much that she couldn’t watch the news for fear of hearing a story about children coming to harm.

She put on a show of being a happy mother to everyone else. But, inwardly, she was terrified.

Eventually, Gini went back to her GP, who referred her to a mental health centre. Here she was diagnosed with OCD and referred for group talking therapy sessions.

‘It was a mix of people with depression, post-traumatic stress, and anxiety, but not specifically for parents,’ she says. ‘It made me worse.’

Finally, after several more visits to the doctor a year after Scarlet’s birth, she was referred to a specialist OCD therapist for one-on-one talking therapy. Gina says: ‘I learnt that my OCD was my way of using checking rituals to ensure Scarlet was OK. In other words, if I checked a plug three times nothing bad would happen.’

Treatment normally involves talking therapies, such as CBT (cognitive behavioural therapy), plus medication such as an anti-depressant, says Dr Rudkin. ‘But it’s the talking therapy that gives you a different perspective.’

Gini began a form of CBT involving ERP therapy (exposure response prevention) where a patient is gradually exposed to the thing they fear.

Gini says: ‘I had to get the biggest kitchen knife out of the drawer and have it on the sofa next to me one evening. The first night I cried and could leave it there only seconds. The next night I could for minutes. Then half an hour.’

Slowly, she also stopped checking plugs and the front door.

As Gini recovered, she realised she could not remember the first few months with Scarlet. She says: ‘It was a haze of fear and terror.’

It took three years of therapy for Gini to recover enough for her and Richard to contemplate having another baby.

Her second daughter, Nancy, is now 19 months old and Gini has had a completely different parenting experience.

‘I now can tell myself a thought is just a thought; that it’s OK to be fearful and worried for your child but not to let it take over,’ she says. ‘I’ve been able to enjoy being a mum to Nancy instead of cowering in my room, or checking she is breathing every five minutes, or checking switches.

‘I’m telling my story because I think there must be lots of mums like me who are not helicopter parents at all, but might have OCD.’

Heat's Jimmy Butler says Miami's NBA quest 'not for stats ... not for fame'