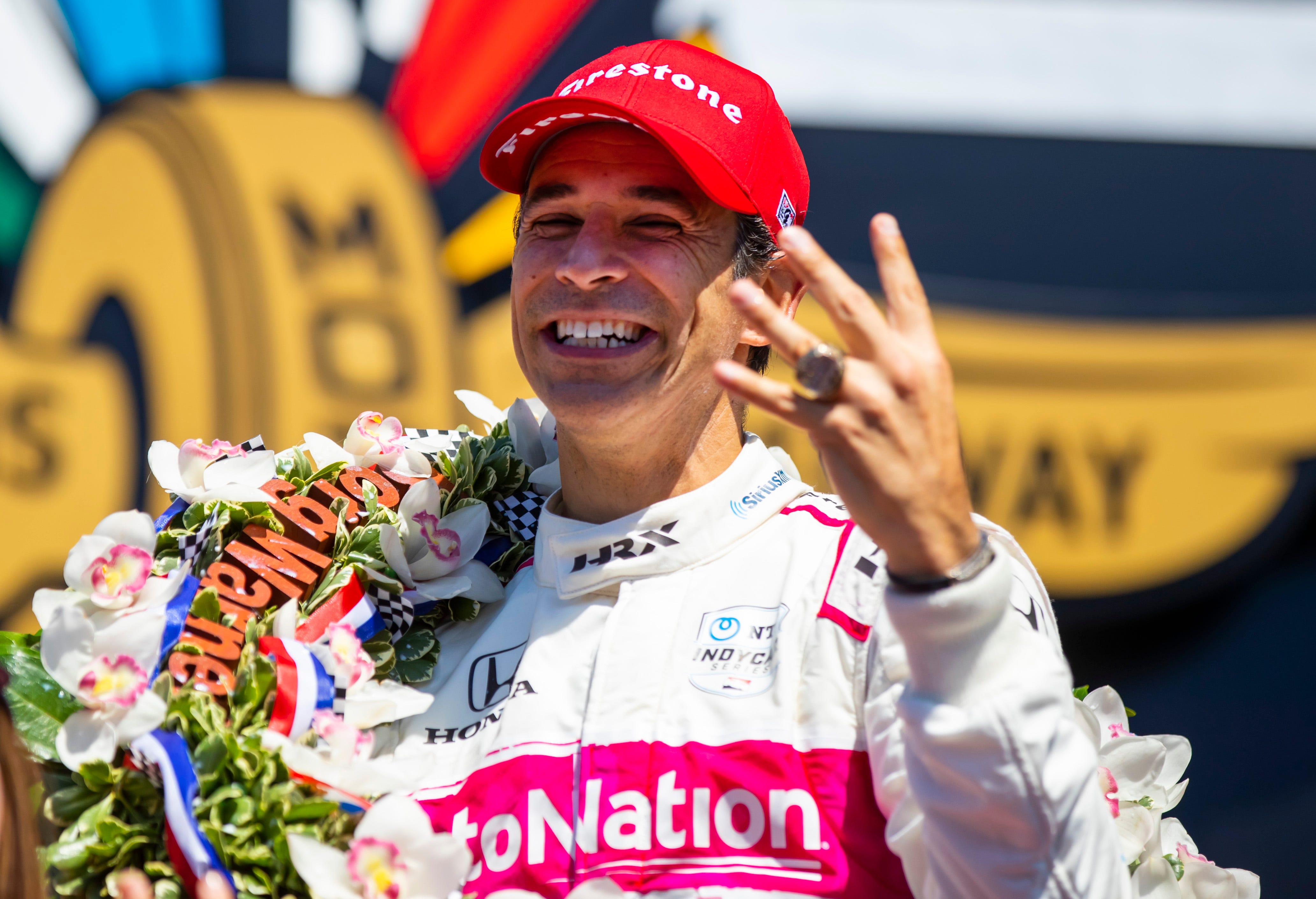 INDIANAPOLIS – After scaling that front stretch fence like Spider-Man and watching Mike Shank follow right behind. After getting into a one-man footrace, headed the wrong way down the front stretch. And after teammates-turned enemies like Will Power and Simon Pagenaud embraced him in a bear hug, Helio Castroneves managed, somehow, to find a quiet moment near the Yard of Bricks with his daughter Mikaella. In all the cacophony of winning his fourth Indianapolis 500 Sunday afternoon, there was a lesson to be learned.

The world’s largest single-day gathering in 14 months wasn’t deterred. They were chanting his name, scaling the outer fence right along with him and refusing to leave their seats. The 46-year-old’s exuberance hadn’t seemed to drop since he first captured their hearts 21 years ago, and the 135,000 fans lucky enough to be inside the Indianapolis Motor Speedway were back in the trance from that afternoon in 2001. It was the day Castroneves’ fence-climbing alter-ego was born, and the day the racing world realized that Roger Penske just might have another legend-in-the-making on his hands.

That day, Castroneves planted a wet one on the Yard of Bricks. A year later, he defended his place in history. By 2009, nine Indy 500s down, Helio Castroneves was on his way to IndyCar racing’s most public, yet reserved, fraternity. It’s bar for entry simple: Win the Greatest Spectacle in Racing as many times as anyone ever has. A.J. Foyt created it in 1977. Al Unser Sr. joined him a decade later, and Rick Mears turned it into a small crowd in 1991. Twelve years ago in 2009, who would have thought Castroneves would ever not make it?

A decade later, out of the sport for all but two races a year, having never won an IndyCar championship and having witnessed two premier chances to win the Indy 500 slip away (2014 and 2017), who thought Castroneves had a chance?

Maybe just himself, and even he knew the chances were disappearing each year. That window he could have driven a car clear through was closing.

Sunday’s Indy 500 victory was a masterclass in self-belief. It’s why, when Mikaella knelt by those bricks, hesitant, her father whispered, “Trust me, kiss them. It’s something you’ll regret if you don’t do it.”

“I still have that fire,” Castroneves said. “I love what I do. This is my passion, and these guys I know are passionate about it too. Repping the old guys? It’s great. I feel, the way technology is, I can go a long time. As long as I have the opportunity, I will.”

CASTRONEVES: What to know about the four-time Indy 500 winner

Some wondered a few months back if that opportunity would surface. Castroneves was in the midst of winning his first premier racing championship of any kind in IMSA during his third season in Roger Penske’s Acura sportscar program. He was 45. Sure, Takuma Sato had just won the 2020 Indy 500 in August, his second in four years. And, yes, Scott Dixon was still at the top of his game while winning his sixth IndyCar championship. But could we put Castroneves in that same class in open-wheel racing?

Penske had given up on him, in a way. Theirs was a working relationship that had been slowly winding down for years and had ended on such a high note. It had run its course, as all racing partnerships do. No one had ever won an Indy 500 after having not done so in 11 consecutive tries.

Why was Castroneves any different?

Maybe the better question: Why did we ask?

“The hallmark of a true champion is perseverance and consistency, and you don’t ever give up no matter what,” Lisa Boggs, Bridgestone Americas Motorsport director told IndyStar on Sunday afternoon. “You learn how to win the biggest race on the biggest stage, and I think today we saw that’s what Helio does in spades.”

Added fellow four-time Indy 500 winner Rick Mears: “He’s kept that fire lit all these years. Anytime he’s out there, he’s got a chance.”

That’s precisely what Mike Shank and Jim Meyer saw. Over impassioned late-night chats, the two co-owners of Meyer Shank Racing, one of IndyCar’s smallest outfits, which debuted in 2017 and is only in the midst of its second full-time season with Castroneves’ teammate Jack Harvey, saw this promise in the aging, yet feisty driver.

And, quite frankly, they couldn’t understand why Penske no longer could.

“Jim and I looked at (Helio’s) performance numbers from (his last full-time season in 2017), and I didn’t quite get him not running anymore,” Shank said. “Of course I thought he had something left in him.”

So they appealed to Castroneves’ heart. We believe in you, and with our technical partnership with Andretti Autosport and as a relatively small team, we can both dedicate you as much attention and resources as anyone.

As they always have been in building their team, the co-owners were methodical in building Castroneves’ program. Sunday was the first of six races the 46-year-old was set to run in 2021 – despite the driver’s most fervent pleadings.

But when Castroneves finished up last weekend’s post-qualifying practice, sitting eighth on the grid, he was downright giddy. He went to Meyer and Shank, the two men who promised to throw the kitchen sink at his No. 06 Honda, and asked them not to.

“Don’t touch the car,” he remembers pleading in the garages that night.

A champion well-trained over the last decade-plus of how something so small can alter a car and dash an opportunity; he didn’t want to let this one go.

So a short ways back he lurked Sunday, letting veterans like Scott Dixon and Alexander Rossi fall victim to an early fueling frustration, while Will Power spun in the pits and Graham Rahal left his pit box prematurely before his left rear wheel spun off with his own chances at an Indy 500 breakthrough.

With 50 laps to go, that landmark so many drivers reference as the time when the real race begins, Castroneves’ masterpiece was starting to come into view. He hadn’t led many laps, but he was there, wasting as little fuel as possible to stay within striking distance. Castroneves would pounce when he needed to, provoking the tenacity of drivers nearly half his age all around him.

“I figured out on Lap 155 that everything he was doing was on purpose,” Shank said. “Everything he did was a chess match. He knew exactly what he was doing, and he knew what he had. That’s the GOAT in him.”

So as the race closed within 10 laps, and Alex Palou appeared his only formidable opponent, Castroneves picked his spots. He led with seven to go, then was passed. And with two to go, he took over again, seeing lapped traffic coming fast in the distance. He knew the lines to run, knew how to hold the young, hard-charging Spaniard off for another 80 seconds. And this time he did.

“He deserved it. He’s worked hard to get it, and I’m happy for him,” Foyt told IndyStar. “It wasn’t given to him.

“I haven’t heard these fans scream like that in I don’t know how long.”

Rethink that click: It's not to late to shop small for Christmas presents

5 takeaways from 'Macho' documentary: Hector Camacho 'had a lot of demons'

Starting on September 13, all New York City employees will be required to either get a COVID...