Matt Hancock breezed in, loving life at the forefront of this new authoritarian regime: HENRY DEEDES watches the Health Secretary on presumptuous form in Parliament

What a cocky figure Matt Hancock cut as he entered the chamber yesterday. It was as though a neckerchiefed local squire had just sauntered into the village pub. The stroll was long and purposeful, his snout raised proprietorially at a 45-degree angle.

Under one arm was his ministerial folder, nestled so casually it could have been a copy of the Racing Post.

As the Health Secretary hovered by his seat, he turned and scanned his lesser backbench colleagues. His eyes were narrowed, as if to suggest he was at least vaguely familiar with one or two of them. A smile, a quick joke. Cue a few nervous titters among them. 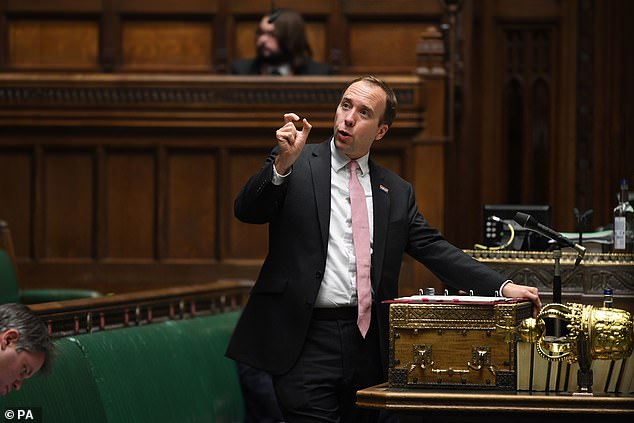 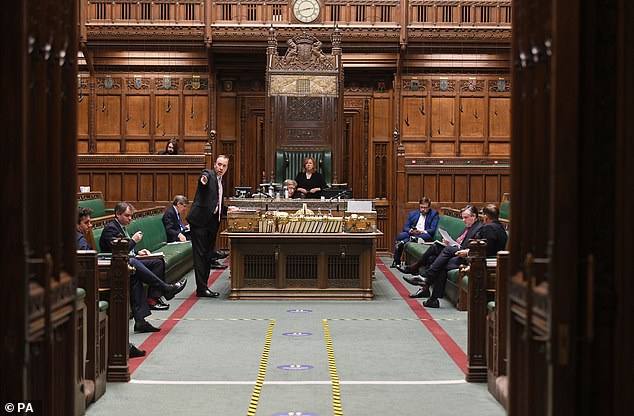 To see the Health Secretary in such breezy, presumptuous form is almost enough to give one hope in these desperate times. After all, when a plane hits heavy turbulence does one not find relief in the unconcerned smile of a dolled-up flight attendant?

To feel any such assurances from Mr Hancock would, I fear, be entirely misguided. It is simply that he loves life at the forefront of this new authoritarian regime. The more it requires him to flex his ministerial muscles, the happier he seems. He had come to open the debate on the Government’s latest raft of lockdown restrictions, announced by the Prime Minister on Monday.

We kicked off with the usual scare statistics designed to get us scurrying back behind the sofa. Rising hospital admissions, a sevenfold increase in intensive care patients in the North… Much of his energy was devoted to rubbishing demands from scientists calling for a herd immunity approach.

It was all garbage, he insisted. Nonsense. He argued that many infectious diseases never reach herd immunity, like measles or flu. Why would coronavirus be any different? The sheer disdain in his voice as he said this. At any moment, I thought he might yell ‘fools!’ 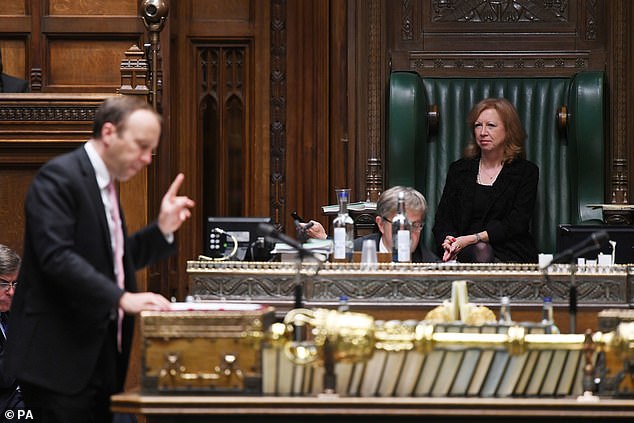 Labour’s health spokesman Jon Ashworth made it clear he wasn’t going to stand in the way of the new measures, though he felt they should go much further. Mr Ashworth cuts a relaxed figure. He doesn’t let Hancock’s jarring insouciance grate him. Unlike some of his colleagues.

Debbie Abrahams (Oldham E and Saddleworth) worked herself up into a right old flap over the Government’s handling of the crisis. ‘I will not let them get away with this!’, she yelled twice over. The Government benches didn’t quite boil over. But they certainly simmered at times. Chairman of the 1922 Committee Sir Graham Brady expressed mild horror at how new legislations were being used to control the entire country. He implored Hancock that this ‘half-alive state cannot be allowed to become permanent’. Hancock gave him a vigorous nod of the head. Got the feeling he’s a bit scared of Brady.

More from Henry Deedes for the Daily Mail…

The terrifying reality of our economy was brought home by Steve Baker (Con, Wycombe). He thought it ‘precarious’ that the current strategy was to wait for a vaccine while propping ourselves up with vast amounts of ultra-cheap debt.

Baker suggested it took a ‘peculiarly high level of economic education’ to think this strategy might be a problem. Around him, there came rueful grins.

Beautifully tailored Imran Ahmad Khan (Con, Wakefield) made a devastating speech about the ‘crippling’ effect the proposals would have in his area.

His inbox had been ‘swamped’ from local business owners. ‘I have not received one email commending the Government on these proposals,’ he remarked ominously.

Speaking of emails, a cross Sir Christopher Chope (Con, Christ-church) read out a quote from William Pitt sent to him by one of his constituents: ‘Necessity is the plea for every infringement of human freedom. It is the argument of tyrants; it is the creed of slaves.’

Bluntest observation on the nation’s finances came from Sir Edward Leigh (Con, Gainsborough) during an earlier, urgent question on Rishi Sunak’s latest raft of economic rescue measures. Crotchety Sir Edward’s diagnosis? ‘We are going bankrupt as a nation.’ And to think it’s only Wednesday.

Where could Le'Veon Bell land in a trade? 6 possible team fits for Jets RB