As the roar of Air Force One cuts the Pennsylvania sky in two, a giddy sense of excitement rips through the bleachers.

For a moment, the great flying fortress of blue and white steel seems to just hang there, its fearsome snout piercing the drizzle.

Slowly, effortlessly, it lowers to the ground before plonking its great belly on the tarmac like a beached whale.

It was Monday lunchtime on a dark dank day in north-eastern America and Donald J Trump had arrived in town. And, as is his custom, he had not come quietly. 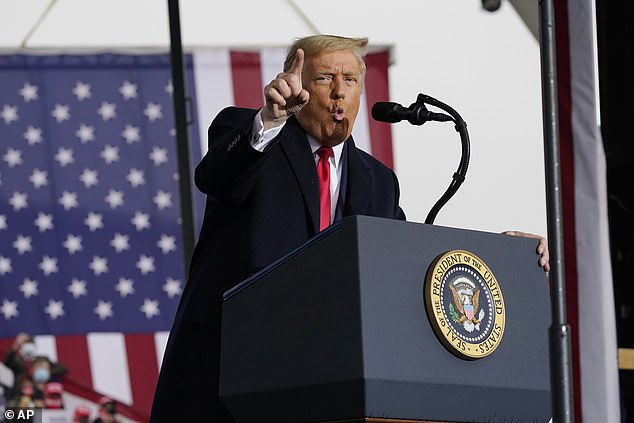 On stage he was his usual cocky self. If he believes he is going to be trounced next week as comprehensively as many suggest, he showed no sign of it 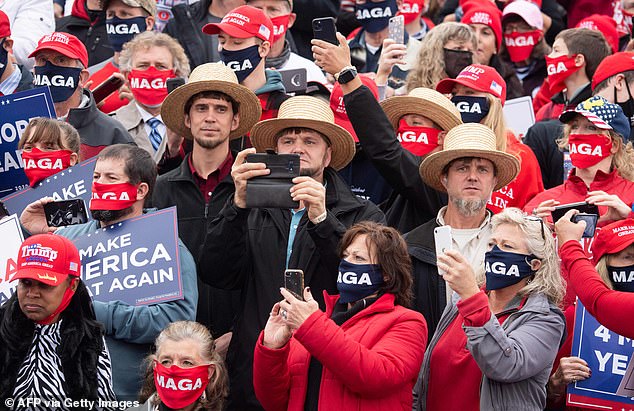 The jibes against Team Biden were relentless. ‘They’re gonna kill the country!’ he screamed.

Each barb was said with the corny delivery of a washed-up Las Vegas cabaret act.

A nonchalant roll of the shoulders here, a smarmy cock of the head there.

When feeling particularly satisfied with himself, those rubberoid lips would break out into an elongated oily smirk as though savouring the bile congealed on his tongue.

‘Isn’t it great to have someone who doesn’t have to use an autocue?’ he asked triumphantly, ignorant to his own incoherence.

Welcome to Lancaster, a charming, albeit slightly one-horse city 80 miles west of Philadelphia where thousands of die-hard fans yesterday squeezed their way into a hangar at the airport to see their man rally for the last time here before the crunch next Tuesday.

Face masks were worn, though any notion of social distancing was tossed out of the window.

For most electoral observers, Pennsylvania is where next week’s election will be won or lost.

As a traditional swing state, it’s always been regarded as a vital battleground for any successful presidential campaign.

Which could ultimately spell bad news for Trump supporters.

A poll this week put Joe Biden, who grew up in the state’s leafy, blue-collar city of Scranton, at least six points ahead.

But as The Donald knows better than anyone, America’s number crunchers have got it oh-so-wrong before.

In 2016, they put Hillary Clinton in a similar lead in Pennsylvania, yet come polling day it became one of the Democrats’ famous ‘blue wall’ of states which crumbled, carrying the Trump machine to victory.

Everyone wore a distinctive scarlet ‘Make America Great Again’ cap. From above, they resembled a sea of red crabs scuttling across Christmas Island during breeding season.

The air was thick with the whiff of hot dogs, fried onions and other nostril-punching odours from the lines of dubiously nutritious snack vans. Trump merchandise stalls were everywhere.

One owner, David Cast, told me he had already sold two dozen T-shirts that morning. At 20 bucks a pop (at least that’s what he charged me), that’s not a bad morning’s work. We’re not exactly talking high-quality hand-stitched Sea Island Cotton here. 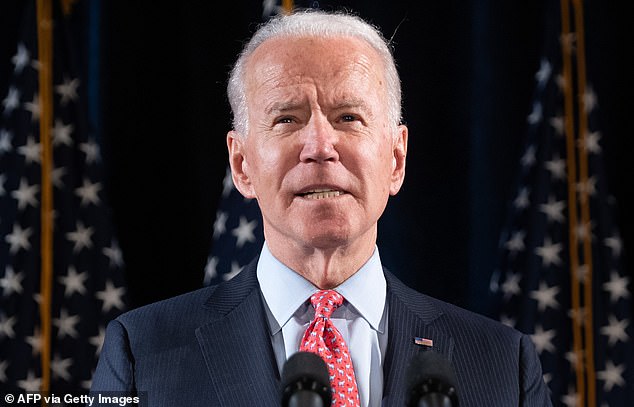 A poll this week put Joe Biden, who grew up in the state’s leafy, blue-collar city of Scranton, at least six points ahead

All walks of life were on show. Young, old, women in leisurewear, men in suits. Surprisingly, even a number of Amish people came along (Lancaster has several Amish settlements).

Some of the more genteel residents of this sleepy city simply came to enjoy the atmosphere, laying out their picnic chairs outside the airport and munching on sandwiches in Tupperware boxes.

‘Give a big shout for me when you’re in there!’ hollers one good ol’ boy with a thick walrus moustache as I made my way past.

And then, just before 1.45pm, after the Village People’s Macho Man had blared over the tannoy for the umpteenth time, threatening to drive us all doolally, Trump finally appeared.

On stage he was his usual cocky self. If he believes he is going to be trounced next week as comprehensively as many suggest, he showed no sign of it.

He swaggered around the stage, pulling exaggerated faces of surprise. ‘Who, me?’ 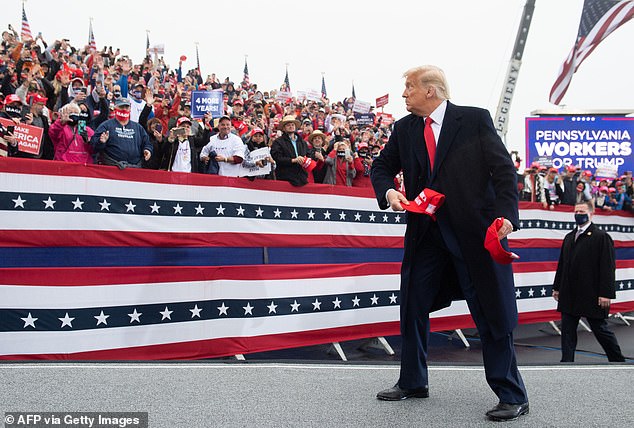 He punched the air, he threw his arms out wide. Finally, after what seems like an age basting himself in adulation, he addressed the microphone.

‘They’ve got a big surprise coming to them, don’t they? Just like they did four years ago.’ Almost on cue, the crowd erupts into a chorus of ‘USA! USA!’

As ever, his dismissiveness of creaky Joe Biden and his running mate Kamala Harris stretched the boundaries of poor taste even by his, frankly, dirt-poor standards.

Biden was constantly taunted as a financial know-nothing who wants to raise taxes and kill America’s energy industry.

Donald Trump has ridiculed rival Joe Biden after the Democratic candidate forgot the President’s name during an online address.

The 77-year-old warned against ‘four more years of George’ – an apparent reference to previous president George W Bush, who left office in 2009.

The blunder was seized on by Mr Trump, who tweeted: ‘Joe Biden called me George.

‘Couldn’t remember my name. Got help from the anchor to get him through the interview.’

It feeds into the narrative spun by Mr Trump – who is three years younger – that Mr Biden, pictured, is mentally unfit to be president because of his age. He has regularly referred to Mr Biden as ‘Sleepy Joe’.

The former vice president and his wife Jill had been speaking online to a virtual concert organised by the Democrats.

Mr Biden said: ‘This is the most consequential election in a long, long time, and the character of the country is literally on the ballot. What kind of country we’re going to be – four more years of George, er, George, er…’

Mrs Biden then muttered ‘Trump, Trump’ under her breath in a bid to correct him.

‘The guy does not know what he is doing,’ Trump sneered. ‘He’s gonna kill your economy.’

He then attacked Harris for her green ambitions.

‘What about her, huh?’ he asked mockingly. ‘No planes, no cars, no cows, right? They don’t like cattle of any kind.’

Naturally, his own achievements received substantial airtime. ‘I did things they said couldn’t be done,’ he bragged. Trade deals, drug prices – there is no negotiation in which he, the master businessman, failed to come out on top.

But for all the jibes about Joe Biden’s dodderiness (‘he barely made it through the TV debates’), the President himself is no Dorian Gray.

His eyes were heavily crinkled, the face sagging and jowly. That famous custard-coloured comb-over appeared grey and limp.

Trump’s voice was beginning to sound a little sandpapery too, though after his recent breakneck travels around the country, that’s perhaps forgivable.

All the while, coronavirus was hardly mentioned.

Though, why would it be? No issue has done more to obliterate Trump’s presidency.

And yet he made light of his own illness, telling a rather odd story about how desperate he was to get out of hospital to get away from all the doctors touching his body.

He seemed far more comfortable talking tough on the economy, which, despite everything, is actually growing again.

‘We will be back, very quickly,’ he insisted. ‘It’s the greatest comeback in the world.’

Eventually, after over an hour and a half of chest-puffing and fist-pumping, in which he asked the crowd to choose between ‘a Trump boom or a Biden catastrophe’, the President wrapped things up and trotted over to nearby Martinsburg.

After that, it was back on that giant bird to return to the White House in time for a presidential supper.

With a week to go until the election, the highly dedicated tribe who turned out yesterday are praying it won’t be one of his last.