For a man with his head stuck in a vice, wedged between the wails of bankrupt business owners and the raging howls of the science community, Boris Johnson delivered a highly competent performance at PMQs yesterday.

Words not uttered often in this column, admittedly. But he was stolid and authoritative.

Sir Keir Starmer’s decision to side with the scientists and demand another national lockdown is a bold, some might say unnecessary, gamble.

Not only does it place him at odds with business owners, it allows Boris to slip into his favourite role as the nation’s chief optimist.

In front of a lively chamber, the PM positioned his ‘three-tier’ system, localising restrictions in the worst-infected areas, as one last crack – a final opportunity ‘to keep things going, to keep businesses running, to keep our kids in school.’ 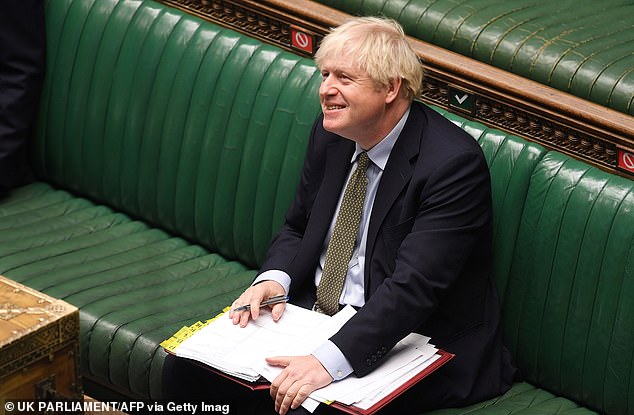 In front of a lively chamber, the PM positioned his ‘three-tier’ system, localising restrictions in the worst-infected areas, as one last crack

As sells go, it was a good one.

In this sort of form, he could have sold me a clapped-out Ford Cortina.

With the two sides now decided upon a very different course of action, there was a notable urgency about the session.

We are in high stakes territory. Should the nation lock down again in the next fortnight, Sir Keir will hammer Boris.

If the numbers of infections start to go down under the PM’s strategy, it will be he who is crowing.

Sir Keir got stuck in straight away. Bang.

No preamble, no pointless tributes to victorious tiddlywinks teams.

He demanded to know why the PM had ignored Sage’s (Scientific Advisory Group for Emergencies) lockdown advice back in September.

Starmer kept referring to Sage as though it were some sort of unimpeachable oracle.

Is this justified? We might as well have examined animal entrails (as the soothsayers of yesteryear did) for all the good some of their predictions have done us.

We heard all the latest horror stats. ‘That is the cost of rejecting the advice,’ Sir Keir intoned solemnly. 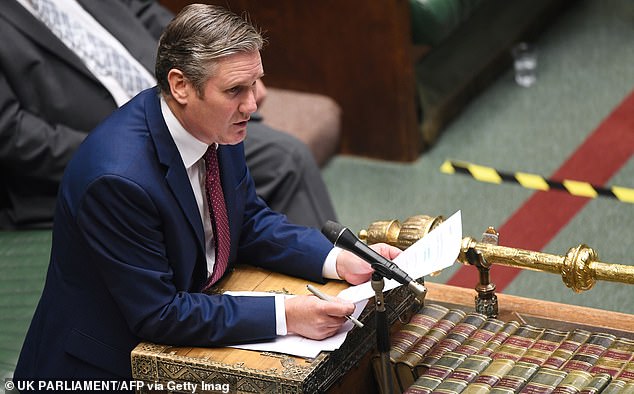 Sir Keir Starmer’s decision to side with the scientists and demand another national lockdown is a bold, some might say unnecessary, gamble

Further down the front bench sat his foreign affairs spokeswoman Lisa Nandy, wearing a frown like an upside-down banana.

Boris reasoned that infection rates in places such as Cornwall were far lower than, say, Liverpool.

Was it really worth shutting down Polzeath’s tea rooms to satisfy the hefty spikes in the North West?

Besides, Starmer should have turned up and voted for the Government’s new measures on Tuesday if he was serious about tougher restrictions.

The session took a peppery twist after that. Good.

Too long have this pair pranced around the despatch box like two ageing Broadway hams barely so much as laying an insult on each other.

Starmer accused the PM of being ‘someone who’s been opportunist all his life’.

As such, righteous Sir Keir couldn’t possibly expect Boris to understand how he was ‘genuinely in favour’ of another lockdown.

Savour, if you will, the unrefined piousness of this statement. Wonderful, no?

The PM kept calm. No guffawing. No ‘Captain Hindsight’ tomfoolery.

He replied that he was simply determined not to resort to the ‘misery’ of another lockdown.

As for opportunism, he added: ‘I’m afraid that’s the name of the game for the party opposite.’

From the Government benches there was a notable uplift in noise from his backbenchers. 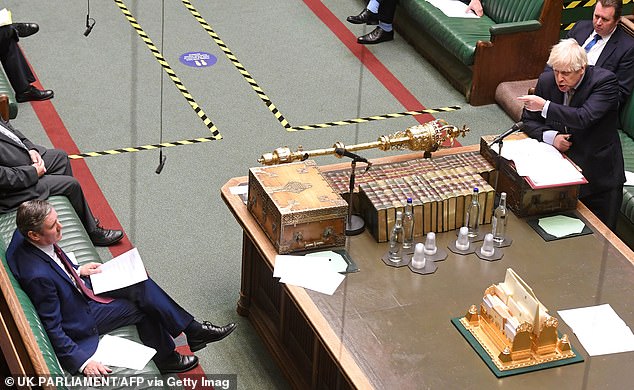 Or ‘uptick’ to use the science boffin phrase du jour.

Probably the nosiest I’ve heard them since numbers in the chamber were reduced.

Amazing what a swell in atmosphere does for the PM’s confidence.

When Starmer let it be known he was down to his last question, a great cheer went up opposite.

Go on, Sir Keir – just a quick smile. Show us you’re human. Not a chance, sadly.

Instead, he reeled off a press clipping he’d found where a Government minister – unnamed of course – predicted there was an ‘80 per cent chance’ the PM would back a ‘circuit break’ in the next two weeks. Was that correct?

Boris said he couldn’t rule anything out, but for now was determined to keep the country open – albeit partially.

It was a decision he hoped Starmer might eventually come round to.

Starmer stared ahead, unflinching, unblinking. It was the look of a man who couldn’t even countenance the idea he might possibly be wrong.

Zoom's CEO: Working from home is not a fad