They say that success has a thousand fathers, yet failure is an orphan. If nothing else, we should probably admire Dido Harding then for unstinting support of her progeny.

Dido is the pixie-ish former City bigwig hired personally by the Prime Minister to create our wallet-spankingly expensive (and largely hopeless) Test and Trace system.

What qualified her for such a vital role in our fight against the virus has never been explained.

Yesterday she was summoned to appear in front of the public accounts committee to answer for her sprawling great white elephant. 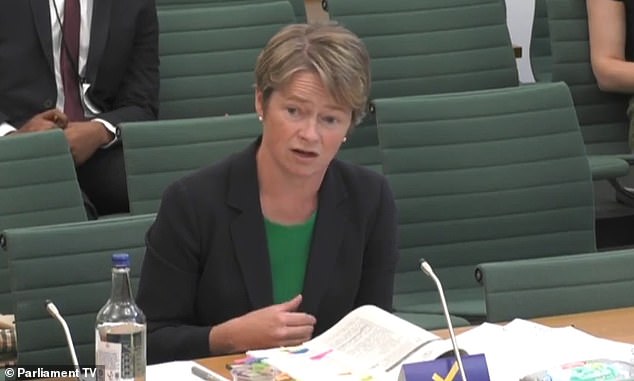 This is usually the moment when a politician starts washing their hands clean of a project. Think Peter Mandelson distancing himself from his ridiculous Millennium Dome.

Harding did the opposite. She announced she was extremely ‘proud’ of her crumbling creation.

Here a dry, dusty silence fell upon the committee room. A cough, an awkward shuffling of papers. It’s possible a knot of tumbleweed slowly blew across the floor. A success, you say? I’m not sure the Chancellor sees it that way.

What qualified her for such a vital role in our fight against the virus has never been explained. Pal of Hancock’s apparently. Her last big job was head of mobile network TalkTalk. She made a right hash of that too (appalling customer service, disastrous data breach, customer exodus, profits halved, share price plunged)

Harding at least looked rather better than when I saw her in front of the science select committee last September. That was back in the pre-vaccine days when Test and Trace looked our best hope for getting out of this mess.

Already you could see it was a disaster zone. She looked rotten. Pooped. Yesterday she appeared far rosier, albeit a little battle-hardened.

Joining her was permanent secretary to the Department of Health, Sir Chris Wormald, a chatty sort with a Mr Brittas voice. A proper Whitehall jobsworth by the looks of him.

Kind of chap who’s never happier than when hosting a strategy meeting.

Also present: Ex-deputy chief medical officer Dr Jenny Harries, who succeeded Dido as head of Test and Trace in April. You’ll remember her from her fleeting appearances at those Downing Street press conferences. Cruel mouth. Squawks like a pterodactyl. Not one of life’s thigh-slappers.

Committee chairman Meg Hillier (Lab, Hackney S) spent much of the session discussing Test and Trace’s budget. She pointed out it had originally been £10billion. It then swelled to £22billion yet only £13.6billion ended up being spent.

‘This is the most out-of-kilter budget I’ve seen in ten years on this committee,’ Meg complained. Harding explained these were not normal times, her voice carrying a heavy hint of condescension. Hillier gave her the stink eye.

Greg Clark (Con, Tunbridge Wells) was brought into the bowling attack. Mr Clark was on loan from the science select committee where he has dazzled. Why Hillier had invited him along wasn’t clear. Impressed perhaps by the demolition job he performed on Harding last September.

So many committee chairs simply play to the gallery but Clark is no showboater. He’s more of a prober, setting little traps for his guests to walk into.

Clark suggested that, if it weren’t for the vaccine, we would almost certainly be into our fourth lockdown by now. He put it to Harding that Test and Trace had effectively been a waste of time. Dido disagreed. She claimed that it was never meant to be a silver bullet when it came to preventing lockdowns.

Clark jutted out his lower jaw. He scratched his head quizzically. He produced a quote from Harding’s own business plan, the one she presented to the Treasury which claimed Test and Trace would ‘avoid a second lockdown’. Harding’s face blanched. Bullseye.

Nick Smith (Lab, Blaenau Gwent) was called. Parsimonious fellow. Proudly told everyone he gets his groceries from the Co-op. Imagine his horror when he discovered 2,000 consultants were working on Test and Trace at one point.

Smith claimed some of them had earned as much as £300,000 a year. Harding doubted anyone had earned that much. Though she did not seem entirely certain. Three hours they grilled her for. It was dense, numerate-heavy stuff, as you’d expect. Hard to follow, hard to understand. Not unlike that useless Test and Trace app really.

CRAIG BROWN: Comedy flip will get the bullet from Al Capone - 100 Years of The X Issue (Pt...

Jacqueline Flores, 25, was parked together with her daughter within the backseat of her car in Fresno on July...