From that eerie Downing Street media room last night there came a high-pitched squeal, coils of black smoke and a pungent whiff of scorched rubber.

This was meant to be the day when we learned our long period in purgatory would soon be at an end. Instead, through a volley of sheepish ‘errms’ and ‘ahhs’, Boris Johnson announced he was slamming on the brakes.

Four more weeks. An entire month more of bossy edicts, scratchy face masks, and the ruddy ‘rule of six’. Freedom snatched from right under our very noses. Back to your cells, you lags: parole denied! 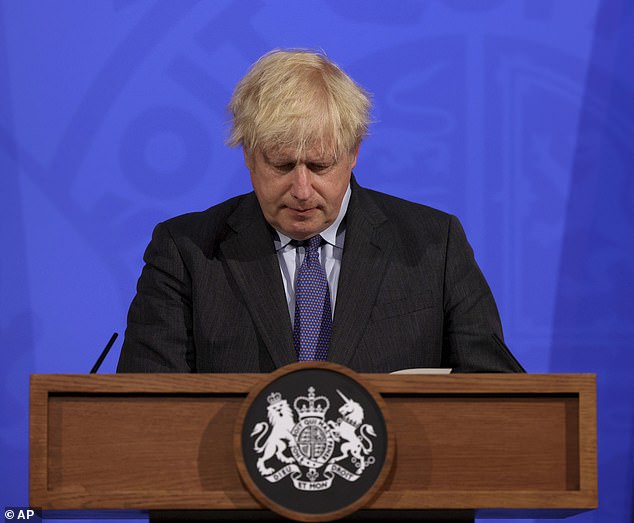 His gait was plodding and heavy, his face spread into a grimace, much like the sort our embarrassed cricketers wore at the weekend after their walloping by the Kiwis 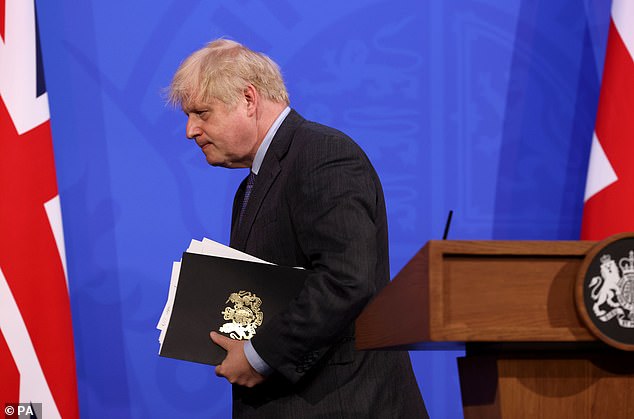 At one point, he even erroneously mentioned our release date would be ‘July 29th’ rather July 19

Not that it came as a surprise. We knew what was coming thanks to days of leaks and briefings.

Even so, you could see the nervy, embarrassed look on the PM’s face as he entered the room.

His gait was plodding and heavy, his face spread into a grimace, much like the sort our embarrassed cricketers wore at the weekend after their walloping by the Kiwis.

Immediately, we heard that the four magic tests required to release the final catch on our national imprisonment had not been met.

Infections were up and hospital admissions were rising by 50 per cent a week.

‘We know the remorseless logic of exponential growth,’ he reasoned. He wanted to give the NHS just a little longer, to get more people ‘double-jabbed’. Now was not the time ‘to ease off the accelerator’. So when is?

By the looks of it, Boris’s face had felt the kiss of the sun’s rays after his sojourn on the Cornish coast. He appeared knackered though. His eyes were droopy.

At one point, he even erroneously mentioned our release date would be ‘July 29th’ rather July 19. Mind you, all that salty sea air and small talk with Macron and Merkel would leave most people pooped.

Those two hooded horsemen of the apocalypse, Vallance and Whitty, were there, flanking the PM like undertakers.

Whitty got his slide machine out. As usual, his eyes were flitting all over the place.

Always reminds me of someone worried he’s forgotten to double-lock the front door. He announced the vaccine rollout was still going swimmingly, but he wasn’t comfortable about all these hospitalisations – so we can’t unlock properly next week after all.

Meanwhile, the ‘Delta variant’, as the WHO bods now insist we call the Indian strain, was still giving him the heebie-jeebies.

Vallance produced a rare moment of optimism when he said the vaccine was proving to be ‘spectacularly’ more successful than the scientists ever expected. He then promptly cancelled that out by predicting Covid would ‘be with us for ever’. Sobering – but what many experts have been saying for months. 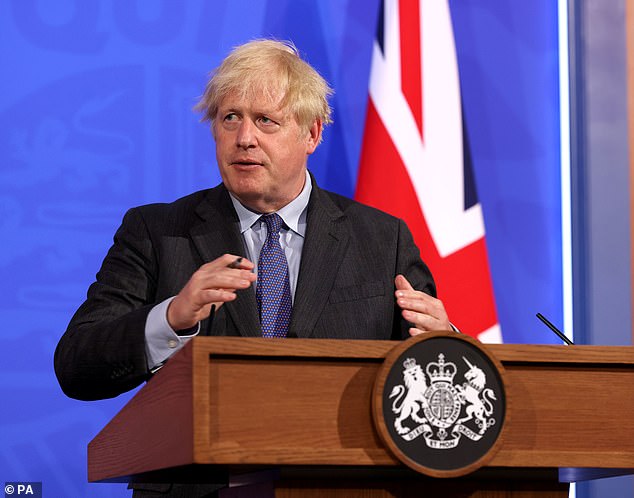 Meanwhile, the ‘Delta variant’, as the WHO bods now insist we call the Indian strain, was still giving him the heebie-jeebies

The BBC enquired of the PM what life would be like after July 19. Boris admitted that was ‘the crucial question’. He seemed curious to find out himself. Twice Boris pointed that we’re simply going to have to find a way to live with this virus. Only so much I can do, in other words.

There was a question about the possibility of foreign holidays, which produced little by way of encouragement.

I suspect the unofficial Government advice for now would be: Stick to Skegness.

Hacks kept pressing Boris on whether he could confidently rule out another delay.

He couldn’t, of course. He could only work with the data in front of him. But he insisted he was confident July 19 would be a ‘terminus date’.

Well, we’ve heard all that before. Barely a week ago, he was telling us there was no reason to suggest we wouldn’t ease all restrictions next Monday. And now look.