‘Her thunder would absolutely not be stolen’: Damian Lewis’s poetic tribute to Helen McCrory


Damian Lewis paid an emotional tribute to his late wife Helen McCrory on Tuesday night during a poetry performance dedicated to the actress.

The Harry Potter and Peaky Blinders actress died from breast cancer aged 52 nine months ago, with Tuesday marking the first time Lewis has spoken publicly about his loss.

The night of poetry at the National Theatre featured a recording of McCrory reading at a previous year’s event, while Damian invited friends of his wife of 14 years to read alongside him. 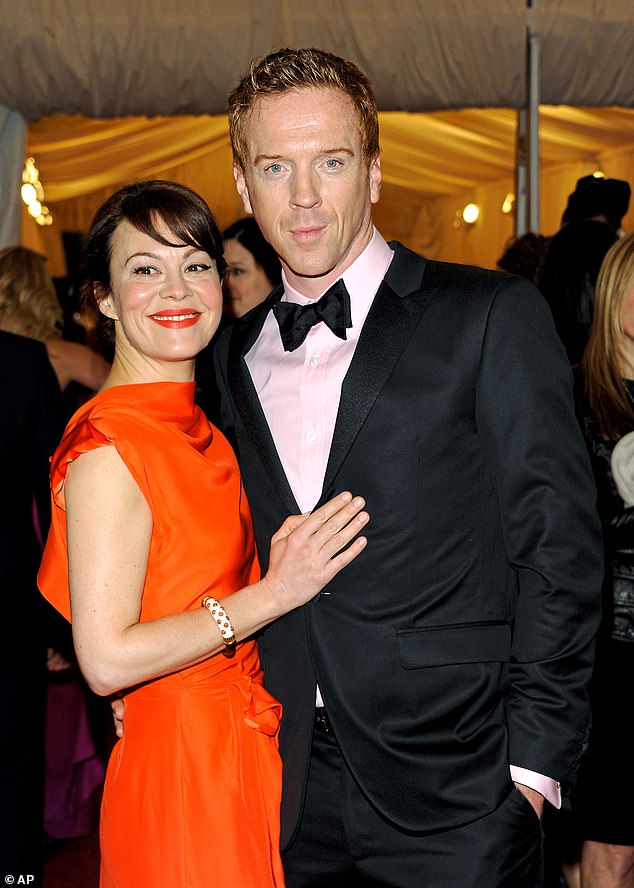 Damian Lewis with Helen McCrory in 2012. It is nine months since he was robbed of his wife, the late Harry Potter and Peaky Blinders actress, who died from breast cancer aged 52

The show was based on poetry advocate Allie Esiri’s latest anthology, A Poet For Every Day Of The Year and featured readings from some of McCrory’s colleagues and friends such as Simon Russell Beale, Lesley Sharp, Fay Ripley and Danny Sapani.

With their daughter Manon, 15, and son Gulliver, 14, in the audience, Lewis maintained his composure as he paid tribute to his ‘perfect Helen’ before handing over to his wife’s friends.

The 900-strong audience applauded again after a video was played of her reading poetry at a previous event, during which Lewis sat with his eyes shut, soaking up her voice.

‘This evening is dedicated to her and it’s perfect, because Helen loved the National Theatre,’ he said. ‘One person whose thunder would absolutely not be stolen was Helen McCrory.’ 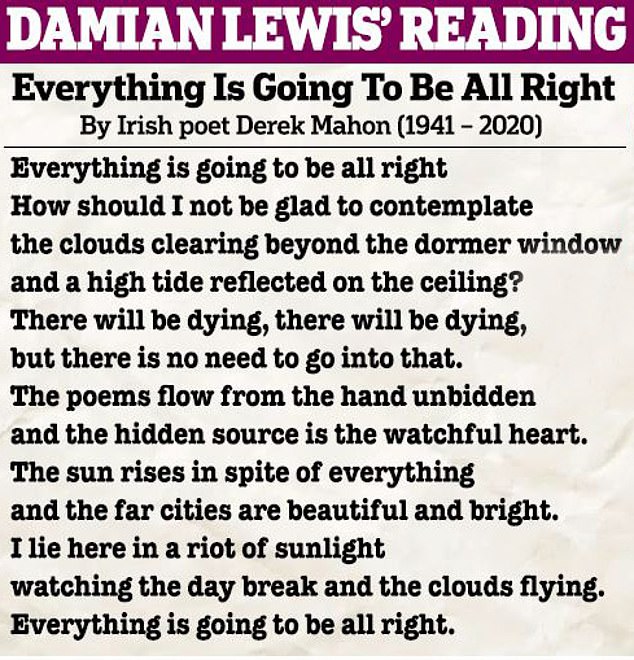 Lewis read the final piece of verse, Everything Is Going To Be All Right, by Irish poet Derek Mahon

Two days after her death, Lewis penned a heartbreaking tribute to her ‘fearlessness, wit, curiosity, talent and beauty’, telling the world he had ‘never known anyone able to enjoy life as much’.

He added that ‘she’s left our beautiful children too early, but they have been prepared for life.

She has exhorted us to be courageous and not afraid. As she said repeatedly to the children, ‘Don’t be sad’… Her generosity has extended to encouraging us three to live. Live fully, take opportunities, have adventures.’

Lewis, 50, presided over an hour-long performance packed with joy, sorrow, melancholy reflection and what the writer Allie Esiri called ‘the general nonsense of life’. 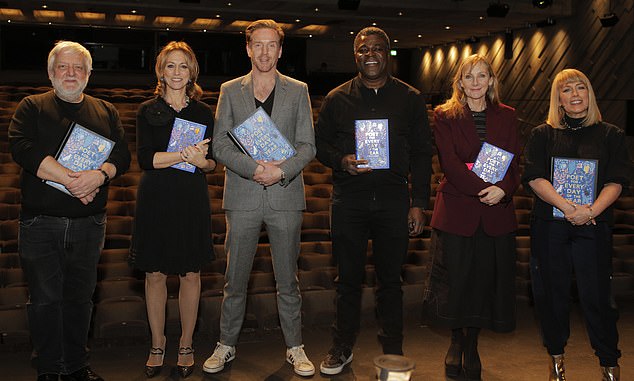 Damian Lewis joined Allie Esiri on stage at the National theatre to launch her new anthology of poetry A Poet for Every Day of the Year. Both the book and the event were dedicated to Helen McCrory

At times the auditorium was filled with rich laughter, at Spike Milligan’s silly four-line poem You Must Never Bath In An Irish Stew and former Poet Laureate Carol Ann Duffy’s verse Mrs Icarus (about a wife ‘watching the man she married prove to the world he’s a total, utter, absolute, Grade A pillock’).

Mrs Esiri said: ‘We dedicated the evening to Helen, and Damian said a few words, but we just wanted to get on and do the show.

‘It’s what she would have told us to do – “OK, enough already, get on with the show!”

‘She loved poetry and I think she would have been pleased to be kind of here with us. It felt right.’

One of the UK’s most successful and well-known actresses, Miss McCrory was known for her roles as the villainous Narcissa Malfoy in the Harry Potter films and as matriarch Aunt Polly in Peaky Blinders, the final series of which will air soon without her. 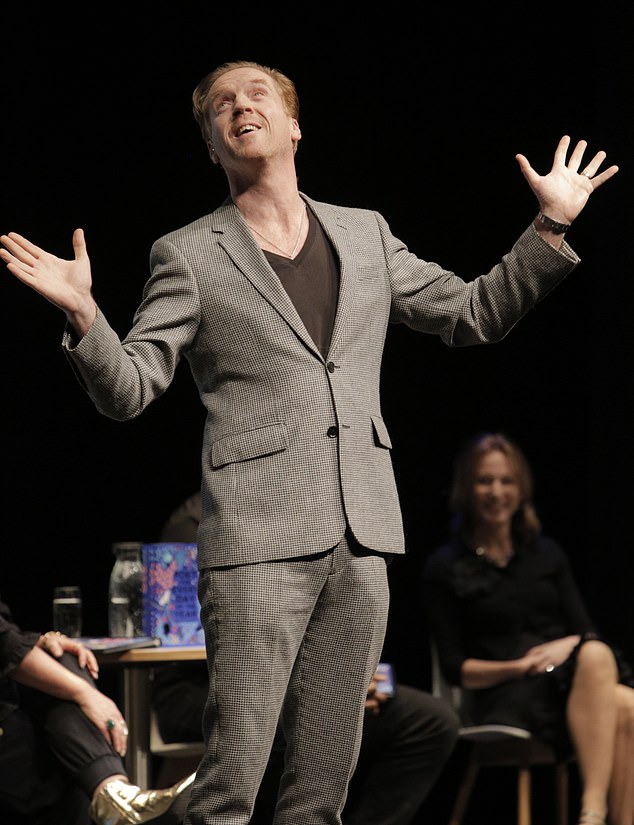 Lewis on stage at the National Theatre. Some of Miss McCrory’s closest acting colleagues and friends recited poems in her memory last night

Appointed an OBE in the 2017 New Year Honours for services to drama, she portrayed Cherie Blair in The Queen and played Lady Macbeth at Shakespeare’s Globe.

Mrs Esiri said: ‘Damian and Helen really helped to get poetry out to people.

When you are stuck at home with Covid but can’t quite take on a novel, a lot of people have been turning to poetry.

‘Tonight we chose poems that will hopefully have chimed with people who have been going through a lot over the last two years.’

She told the audience: ‘Learning from adversity is something many people have experienced over the past two years during the pandemic.

‘My mantra during this difficult time has always been to tell myself “everything is going to be all right”.’

This set up Lewis to read the final piece of verse, Everything Is Going To Be All Right, by Irish poet Derek Mahon.

The theatre was silent as he read the lines: ‘There will be dying, but there is no need to go into that…The sun rises in spite of everything…Everything is going to be all right.’

The evening concluded with the video of Miss McCrory, reading Wild Geese by Mary Oliver.