A hero Indian chef who helped save the lives of scores of guests at his hotel during the 2008 Mumbai attacks has described the awful moment he was first told about a shooting – only to think it was a film shooting.

Hemant Oberoi and his staff formed a human barrier to shield their guests from the terrorists at the Taj Mahal hotel after Pakistani gunmen burst inside during a rampage which killed 166 people in the city.

Oberoi, the head chef, recalled how he had brushed off what he thought was news of a film crew standing outside one of his restaurants, only to be told: ‘No sir, it’s not that kind of a shooting’.

Speaking on the podcast Crisis? What Crisis, he told host Andy Coulson of how he had offered his staff the chance to flee, but all had stayed behind to help.

31 people including seven of Oberoi’s staff lost their lives at the hotel, but many more people were saved thanks to what he described as the chefs’ determination to help their guests.

‘Somebody has come to your house to dine. You have to make sure that they go back home safely. Somebody is waiting for them at home too,’ he said. 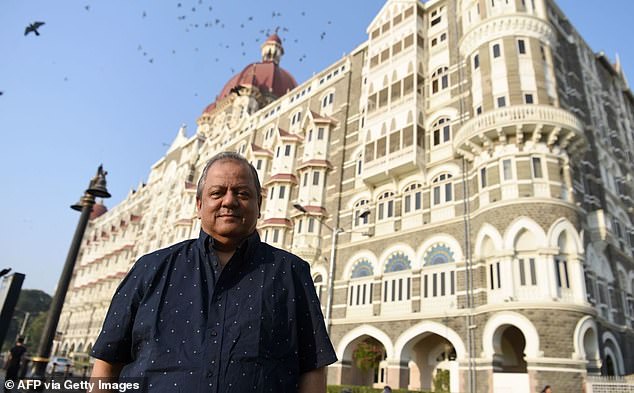 Hotel hero: Indian chef Hemant Oberoi, who helped save the lives of scores of people at the Taj Mahal hotel in Mumbai, stands outside the restored venue 10 years after the 2008 attacks 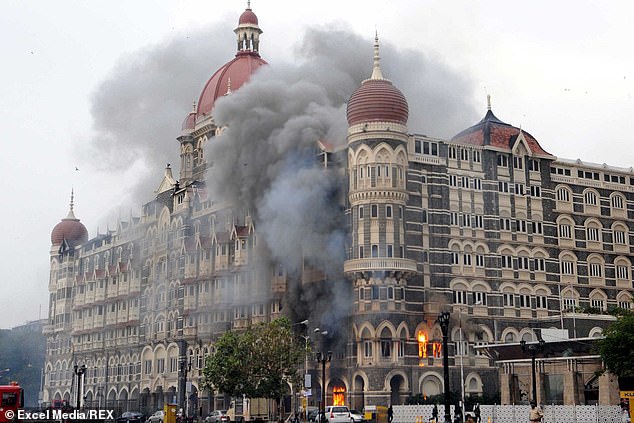 Trauma: Smoke poured out of the hotel in what became the defining image of the three-day horror in Mumbai which left more than 160 people dead

The Taj Mahal hotel was the focal point of three days of carnage in which the Pakistani terrorists turned Mumbai into a virtual warzone.

Traumatic images of smoke pouring out of the city landmark have come to define the 60-hour siege, while inside, Oberoi made split-second decisions to lock down the restaurants and later evacuate the guests.

At around 9.15pm on the night of November 26, he got the fateful call in which his colleague told him what kind of shooting was happening, adding: ‘A gentleman is lying dead outside our kitchen door’.

Oberoi said his staff had immediately switched off the restaurant lights and locked the front doors in order to evade the terrorists’ attention, while guests took cover under their tables.

‘When the terrorists were passing through the corridor, they peeped in and they didn’t see anybody moving, they thought the space was locked and there was nothing,’ Oberoi said.

Elsewhere in the hotel, guests were locked into a private club called The Chambers while Oberoi’s staff considered what to do.

While they had never had any training for a terror attack, the team ‘did not panic’, Oberoi said, adding that ‘they will do anything to protect the place’.

‘My team could have got out, it was just a few seconds away. But our main job, or priority, was the guests’ lives,’ he said.

‘It’s our house where they’ve come and their safety is our priority. That’s the way I looked at the things – that’s the culture we always had.’ 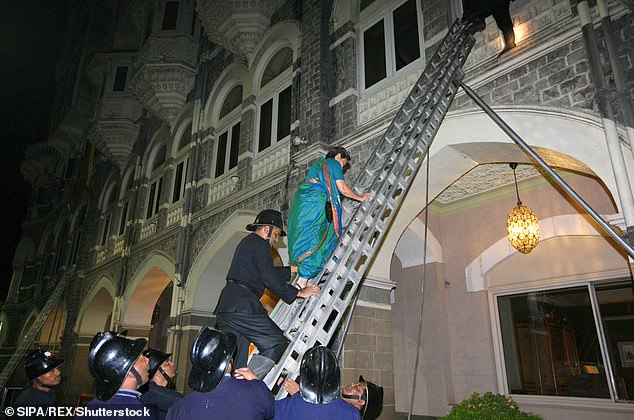 Rescue: Firefighters climb a ladder to save people from the hotel siege which finally ended after 60 hours when the last terrorist was flushed out by elite counter-terrorism forces

As depicted in the 2018 film Hotel Mumbai, Oberoi offered his staff the chance to escape the hotel through an exit which was only ‘seconds away’ – but he never saw anyone flee.

‘They went beyond their duty, they were so courageous, they thought somebody’s come to attack their house, let’s protect it,’ he said of his staff, who even helped make sandwiches for the terrified guests.

‘My secretary, she stayed back, in fact she helped an injured lady who came to my office with a bullet injury who was bleeding.

‘These were the youngsters, as well as the senior team members, they took up their role in such a beautiful way. They were looking after their guests so well.’

Speaking of his own determination to help his guests, he described having ‘seen the generations’ come through his restaurants.

He added: ‘Whatever you do, if you cannot help others, there’s no point being there. If you’re on the road and you do not help someone who’s injured, and move away, then what are you there for?

‘You can be in the same position one day and nobody else will help you. Everything comes back to you in this life. Hell or heaven is here – it’s not anywhere else.’

Oberoi and his team moved many of the guests to the private club which was harder for the terrorists to access. 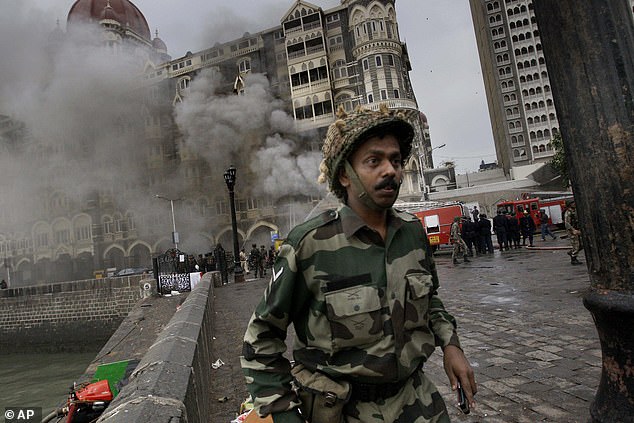 Fire and terror: The hotel burns amid gun battles between Indian troops and Pakistani militants – but parts of the Taj were open again within weeks

He also had the televisions switched off so that guests would stay calm, although some people trapped in the hotel were following the news on their phones.

‘The only decision I thought I should take was that I told the operators to switch off the television so that it should not create more panic for the people,’ he said.

But the head chef had a further moment of dawning horror when he want to the lobby and was told that the terrorists could see his every move because they had taken control of the CCTV room.

After that, Oberoi and some of his staff piled up chairs, tables and fridges in a staircase leading up to the surveillance room to keep the terrorists away.

But the staff soon realised that with gunmen rampaging through the hotel, they would have to evacuate the guests.

So the hotel staff including chefs and managers made what Oberoi called a ‘wall’ so that guests could be escorted away.

Seven of the hotel staff were killed, along with 24 others, but most of the 200 or so guests escaped alive.

One of the chefs, Raghu Deora, was shot in the abdomen and leg by one of the terrorists but was evacuated by hotel security and survived.

All the while, Oberoi’s family was watching live coverage of the massacre – with news channels twice wrongly declaring him dead.

‘I had told them not to call me because the slightest disturbance or noise or whatever could have attracted the attention of these terrorists,’ he said.

He also tried to reassure guests that Indian special forces were on their way, even as hours passed with no sign of rescue.

‘Yes, there was a panic in some of the places, I was getting some calls from people who were overseas and their families were there dining with us,’ he said.

‘I said, don’t worry about that, they’ll be taken care of. And every time I went into Chambers, somebody asked when are the security people coming.’

Many evacuees subsequently spoke of the bravery of the staff during the siege, which finally ended after a elite counter-terrorism forces flushed out the last gunman in the hotel.

In the traumatic aftermath, Taj Mahal staff set about getting the hotel back on its feet as quickly as possible.

Parts of the hotel was re-opened within a month of the attack, while another wing was renovated over the following two years with its bullet-scarred staircase and and blood-spattered hallways fully repaired.

Another hotel that came under attack during the rampage, the Oberoi/Trident hotel (no relation to Hemant Oberoi), re-opened in 2010.

All but one of the terrorists, who had sailed from Pakistan after hijacking a trawler and killing its crew, died during the rampage.

The only survivor was hanged in 2012.