A brave student was forced to take dramatic action after a disgruntled punter began to pelt billiard balls at bartenders who had refused the man service.

Leo Bodycomb, 18, was enjoying a game of pool with friends at the Adelaide UniBar on Wednesday evening when he heard a glass smash, then a loud bang.

A man – who had been refused service at the bar – had retaliated by throwing billiard balls from a nearby pool table where Mr Bodycomb stood with friends. 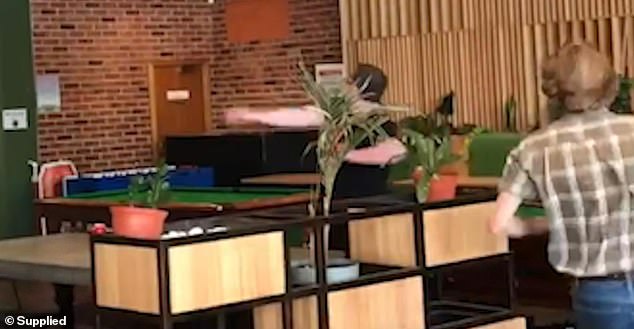 Leo Bodycomb, 18, (right) was enjoying a game of pool with friends at an Adelaide UniBar on Wednesday night when he heard a loud bang from a nearby table

Within seconds the popular university bar had emptied, with patrons rushing from the bar to watch the action unfold from outside as terrified staff took cover behind the bar.

Mr Bodycomb told Daily Mail Australia the tension in the air felt akin to that of a shooting, with his friend being hit by a ricocheting ball as he fled.

‘It was a really scary experience because we didn’t know what he was going to do once he ran out of balls,’ he said.

University students huddled at the doorway while Mr Bodycomb assessed the situation inside and subconsciously made the decision to do something.

Propelled by adrenaline Mr Bodycomb ran back into the university bar and launched himself onto the alleged assailant’s back, successfully throwing him off balance.

He then used his arms to hold the man’s neck in a tight ‘sleeper hold’, wrenching the disgruntled patron backwards as hard as he could.

Mr Bodycomb said they hit the ground and separated, saying at that moment he felt fully prepared to come to blows with the man. 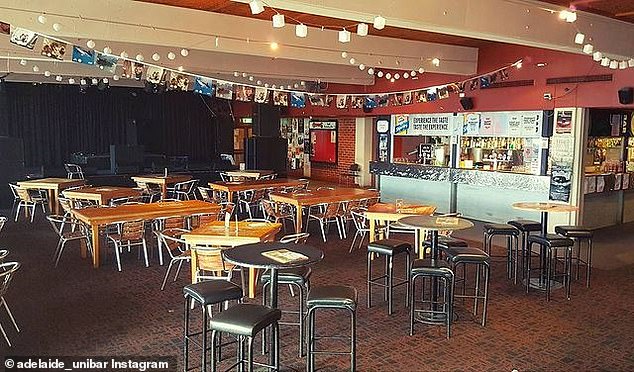 Mr Bodycomb launched himself onto the man’s back successfully throwing him off balance and ending his violent rampage, pictured: Adelaide UniBar

Luckily coming to his aid was bartender Will who rushed out from the bar to help Mr Bodycomb pin the man to the ground, joined by the student’s friends and one chef.

Ten minutes later police and security arrived on the scene and arrested a 32-year-old Clovelly man, charging him with property damage and disorderly behaviour.

The Bachelor of Arts student said it was a ‘pretty exciting start’ to his university years, the incident occurring just three weeks into his first semester.

His heroic act earned him and mates a jug of free beer and another the next day when bar staff recognised Mr Bodycomb.

‘It was exciting, I’ve got a lot of recognition from friends but I’m not flaunting it online, I’d rather be like Batman and quietly take credit,’ Mr Bodycomb joked.