‘He’s got a lot of explaining to do’: Mike Pompeo demands John Kerry reveal info ‘he fed Iran’


Mike Pompeo has said John Kerry ‘has an awful lot of explaining to do’ after The New York Times on Sunday published leaked conversations with Iran‘s foreign minister, in which he claimed Kerry informed him of Israeli military strikes.

Pompeo, who served as Donald Trump’s Secretary of State between 2018 and 2021, told Sean Hannity’s Fox News on Tuesday that he was deeply concerned by the report.

‘John Kerry needs to come forward and speak to the American people and explain to them why he was meeting with him,’ said Pompeo.

‘We know he did that – he has admitted as much – we believe he was absolutely telling the Iranians hang on, this pressure campaign, the power that is being exerted by America against you – you can hang in there, don’t for a minute negotiate with the Trump team,’ said Pompeo. 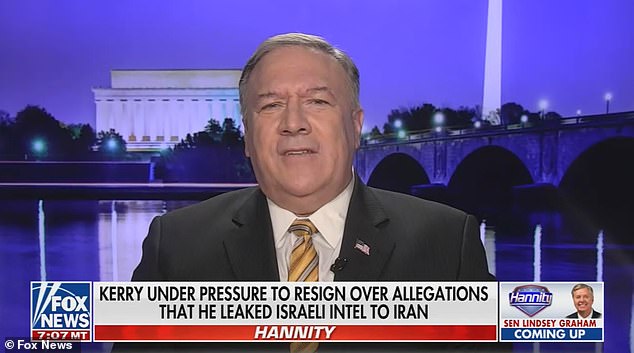 ‘So he has an awful lot of explaining to do.’

Pompeo, who also served as CIA director between 2017 and 2018, pointed out that Zarif made the remarks in an off-the-record conversation, that was never intended for publication.

And Pompeo, strongly believed to be considering a 2024 run for the White House, depending on Donald Trump’s plan, said that he was dismayed that Biden was attempting to renegotiate his old boss Barack Obama’s Iran nuclear deal and bring Tehran back in from the cold.

‘We isolated the Iranians like they never been isolated before,’ said Pompeo. 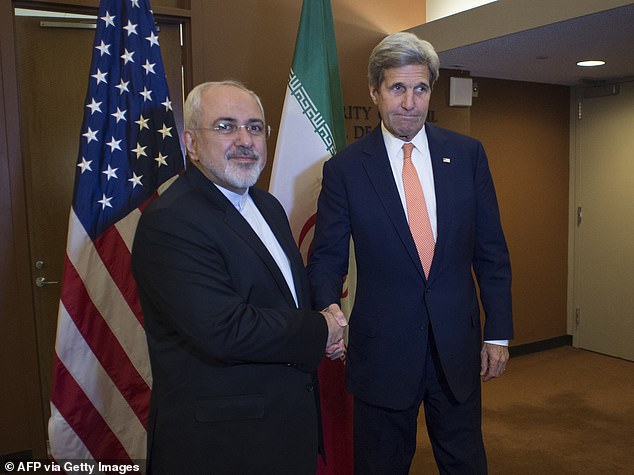 He said the Iran nuclear deal was a bad idea.

‘If it reduces American security as well, I do not for the life of me understand why they would give the Iranians something in exchange for almost nothing – just for this thing that appears to be an article of faith. For them to go back and do this deal, and say they did this, this crown jewel of the Kerry secretary of state time.

‘It would be a big mistake, and it puts Americans at risk.’

Mohammad Javad Zarif, the Iranian official, spoke for several hours to an interviewer producing an oral history of the current Iranian administration.

‘Kerry has to tell me that Israel has attacked you 200 times in Syria?’ says Zarif, complaining that Iran’s military does not inform him about crucial matters.

‘You did not know?’ the interviewer asks twice.

Zarif does not specify when Kerry, Barack Obama’s Secretary of State from 2013-17, was supposed to have made the comment.

Republicans are calling for Kerry to resign as Joe Biden’s climate envoy, or Biden to revoke his security clearance.

Kerry on Monday insisted he never discussed covert Israeli airstrikes in Syria with Zarif, and pointed out that the Israelis openly claimed many of their strikes. 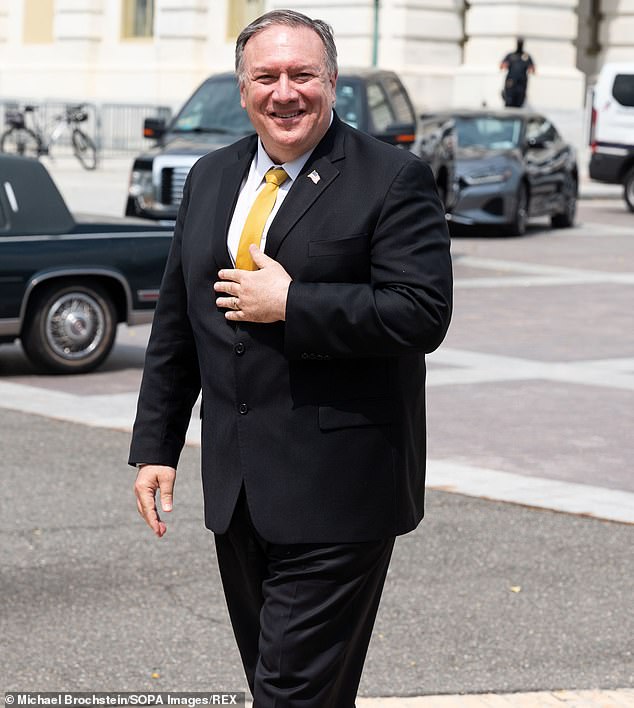 Mike Pompeo, who was CIA director before Secretary of State, is believed to be considering a 2024 run for the White House, if Donald Trump does not aim to retake the presidency

Andy Biggs, representative for Arizona, on Tuesday wrote to Biden asking for revocation of Kerry’s security clearance –  an extraordinary measure for a former secretary of state.

‘If Mr Kerry provided sensitive information to Iran about Israel’s activities in Syria, he undermined a friend and bolstered an enemy.

‘At best, such behavior would be despicable; at worst, it would verge on treason,’ wrote Biggs, according to The Hill.

‘This is disgusting on many levels. Biden and Kerry have to answer for why Kerry would be tipping off Iran, the number one sponsor of terror, while stabbing one of our greatest partners, Israel, in the back,’ she said. 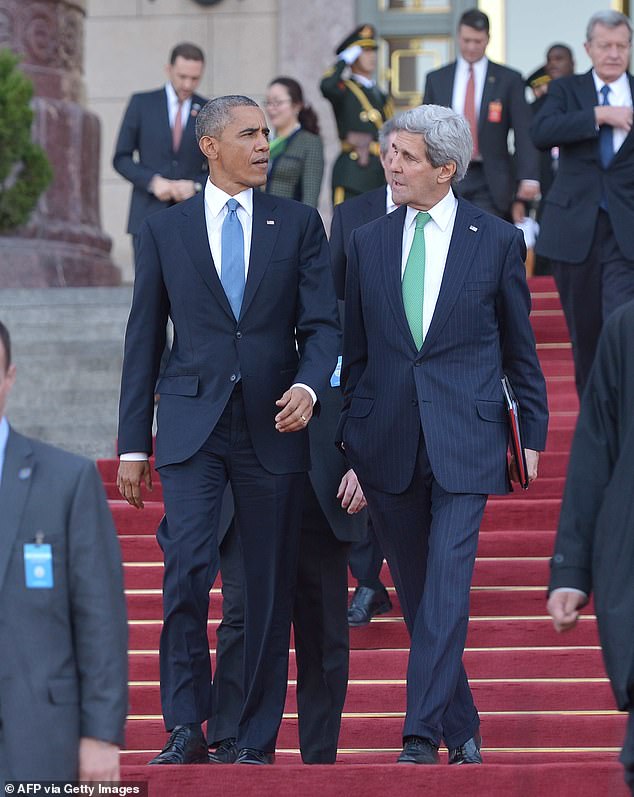 Ted Cruz, Republican senator for Texas, said: ‘If this tape is verified, it would signal catastrophic and disqualifying recklessness by Envoy Kerry to Foreign Minister Zarif that endangered the safety of Americans and our allies.’

Republican Senator Dan Sullivan of Alaska used the word ‘treason’ during a Senate floor speech, and called on Kerry to resign from his climate post.

Representative Jim Banks of Indiana, head of the conservative Republican Study Committee, added: ‘People are talking about treason — and I don’t throw that word around a lot.

‘John Kerry does all kinds of things that I can’t stand. But this is the one that broke the camel’s back.’

The White House declined to comment when asked about Zarif’s comments.

‘I would just make the broad point that if you go back and look at press reporting from the time, this certainly was not secret,’ he said Monday.

‘And governments that were involved were speaking to this publicly, on the record.’ 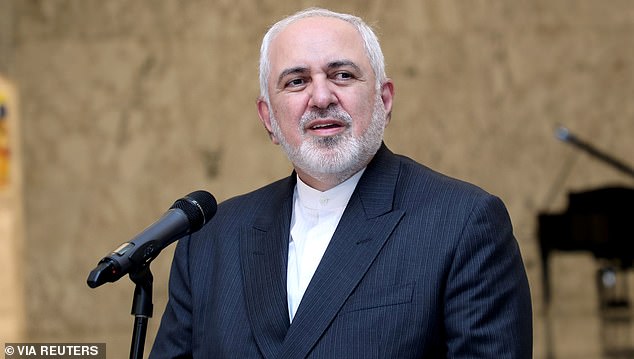 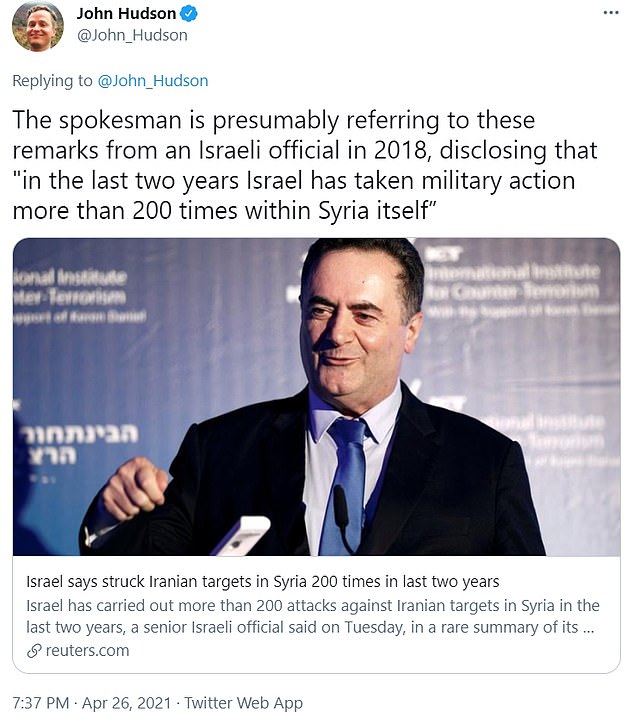 Gabriel Noronha, a former special Iran advisor for the State Department, said he thought Zarif was being set up by regime insiders, reported by Fox News.

There have been numerous rocket attacks and air raids between Israel and Syria since the Syrian civil war began in 2011.

Israel has acknowledged carrying out hundreds of them, but usually does not confirm specific operations.

Below are a small sample:

Jan 13, 2021 – Deadly Israeli airstrikes in Syria kill 57, according to observers

‘The main reason Zarif has survived as Foreign Minister for eight years in Iran’s cutthroat political environment is that he serves as the “reasonable” storefront to the world, protecting the more empowered radical elements of the regime from Western and press scrutiny,’ Noronha wrote in a statement.

‘I think the leak was likely instigated by regime insiders who have long hated Zarif and tried to oust him — they oppose current efforts to rejoin the [Iran nuclear deal and also want to bolster domestic opposition to President Rouhani and his allies running for office in June.’

Noronha was fired from his State Department political post in the Trump administration after tweeting on January 6 that Trump ‘fomented an insurrectionist mob that attacked the Capitol today. He continues to take every opportunity to obstruct the peaceful transfer of power.’

Israel under the government of Prime Minister Benjamin Netanyahu has balked at the Iran nuclear deal hammered out during the Obama administration, in part by Kerry and Zarif.

Israel is believed to be behind attacks on Iran’s nuclear facilities, although it did not comment on the latest explosion at Iran’s Natanz uranium enrichment facility.

Zarif said he had ‘zero’ influence over Iran’s foreign policy while Soleimani, who was killed in a U.S. drone strike in Iraq last year, exerted his power to fulfil his military demands at the expense of diplomacy.

‘I have never been able to tell a military commander to do something in order to aid diplomacy,’ Zarif said in the tape, aired by the London-based Iran International Persian-language satellite news channel late on Sunday.

Russia had wanted the Iranian Revolutionary Guards on the ground to help Moscow’s air campaign in support of the Syrian government. 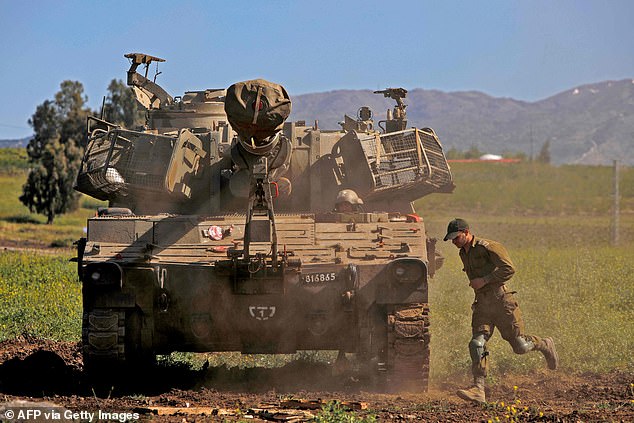 An Israeli soldier runs past a mobile artillery cannon at a position near Moshav Sha’al in the Israeli-annexed Golan Heights on April 22, 2021

‘He (Soleimani) asked me to make this or that concession or point almost every time I went to negotiate (with world powers),’ Zarif said in the recording.

He claimed that the Revolutionary Guards had written ‘Israel should be wiped off the Earth’ in Hebrew in an effort to ruin the deal.

Zarif added that Iran gave up much of what it ‘could have achieved from the nuclear deal’ for the sake of advancement on the battlefield.

His comments come as talks are underway in Vienna aimed at finding a way for Tehran to return to the nuclear deal with the U.S. and other Western powers.

Elections watchdog launches probe into ‘offences’ over No11 flat