As the yacht heels over hard at a seemingly impossible angle, a handsome man in a Hugo Boss suit sprints the length of its 95 ft mast — as tall as a ten-storey building.

On reaching the top, he checks his cufflinks, fixes his tie and dives into the ocean.

No, this isn’t a clip from the new James Bond movie — though he is suave enough to play the next 007. It is British yachtsman Alex Thomson, a daredevil sportsman who has gained a huge online following from stunts like this one, known as the Mast Walk, which has been viewed 4.5 million times on YouTube.

In spite of his online popularity and his brilliance as a yachtsman, Alex, 46, originally from Bangor in North Wales and now living in Gosport, Hampshire, is relatively unknown in the UK outside the sailing community.

But that could all change in the next few weeks as hopes grow of him becoming the first Briton to win sailing’s toughest challenge, the Vendée Globe, the only round-the-world yacht race that is solo, non-stop and without assistance. 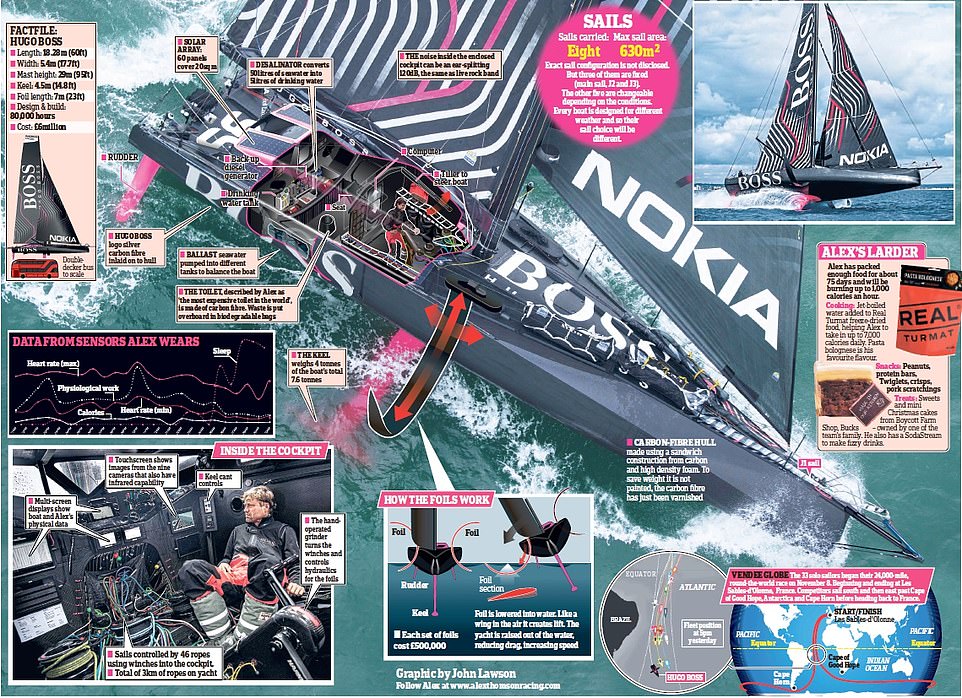 The race, which Thomson is leading after 12 days, is a brutal three-month voyage of 24,000 nautical miles in conditions of extreme heat and cold, hurricane-force winds and violent, plunging swells of up to 60 ft — all while participants are experiencing dangerous levels of sleep deprivation and exhaustion.

The 33 competitors set out from western France on November 8, with the winner expected to return in the second half of January. By then, they will have sailed south down the Atlantic, across the Pacific and Indian Oceans via the Cape of Good Hope and Cape Horn and north again up the Atlantic.

The race has been held every four years since 1989 and has only ever been won by Frenchmen. This year, the smart money is on Alex to break that run. If he does, it will be down to meticulous preparation, cutting-edge design and a mind-bogglingly high-tech boat named HUGO BOSS.

In conjunction with sponsor Nokia Bell Labs, Thomson’s team has set up an internet ‘hub’ that all but welcomes you aboard. 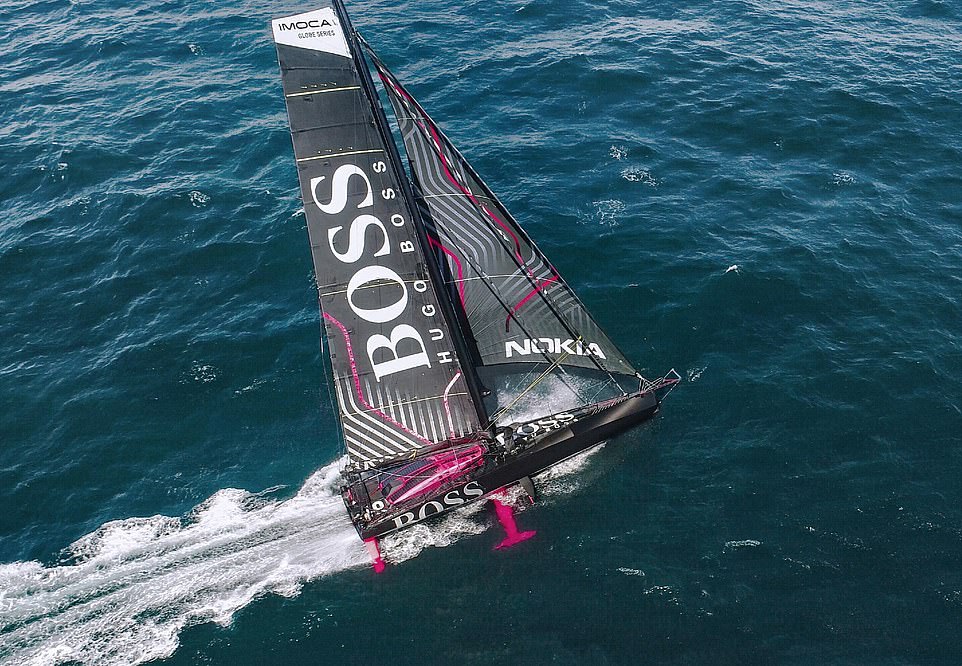 Only 89 of 167 sailors have finished the 28,000-mile solo race around the world which Mr Thomson is competing in for the fifth time 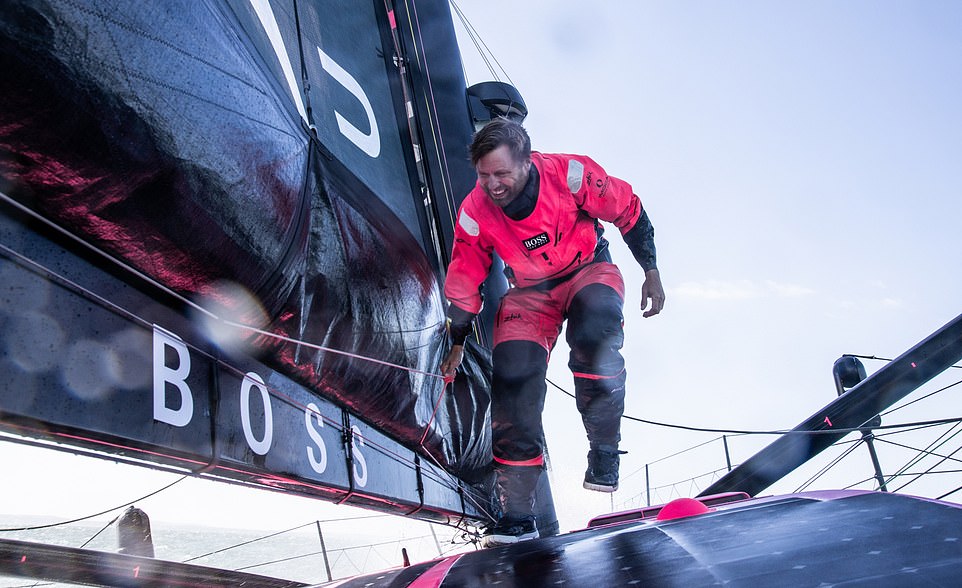 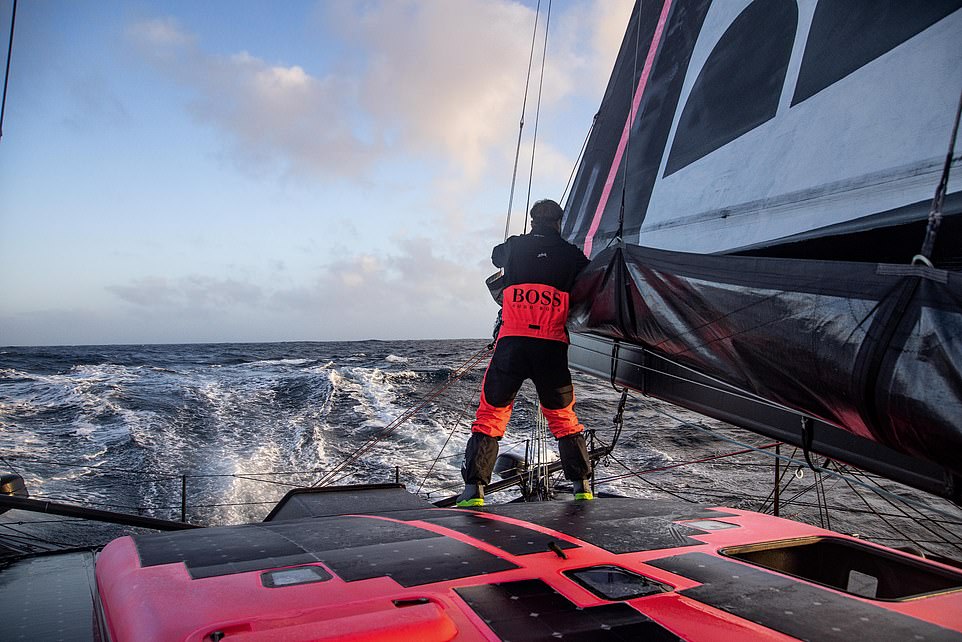 With a £6million yacht capable of going twice the speed of the wind, and on foils that can fly the 60ft hull above the surface of the water, the sense is that a nearly-man among the world’s best sailors could finally have his day

This technology tells me that, at the time of writing, the yacht is travelling at 22.2 knots (25.5 mph) at an angle of 1.66 degrees, that Thomson’s heart rate is racing at 120 beats per minute and that he has had just 11 minutes’ sleep in the previous 24 hours.

His 60 ft yacht is at the vanguard of boat design. At 7.6 tonnes, it is incredibly light. During deadly storms, sometimes thousands of miles from land, all that come between Thomson and disaster are two layers of 1mm-thick carbon fibre either side of a honeycomb core designed to withstand the hardest of impacts.

Naval architects VPLP, design manager Peter Hobson and boat builder Jason Carrington spent 26 months producing a boat that features two hydrofoils that look like flapping wings protruding from the hull, wings that enable the boat to fly above the waves, reducing drag and achieving speeds of up to 38 knots (44mph). 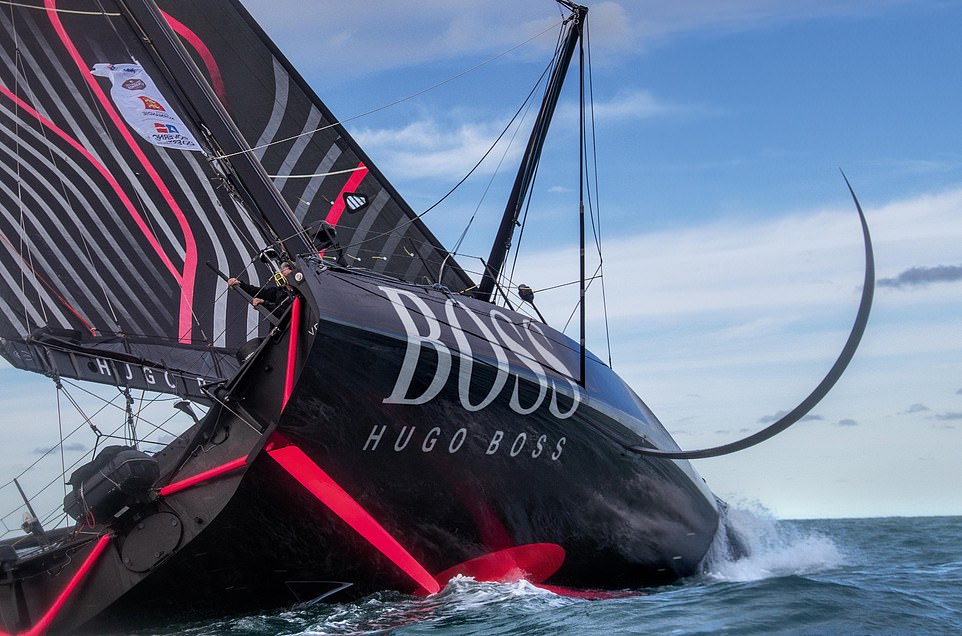 This time, in a quicker boat, he thinks he will lap in 67 days barring any funny business from the sea 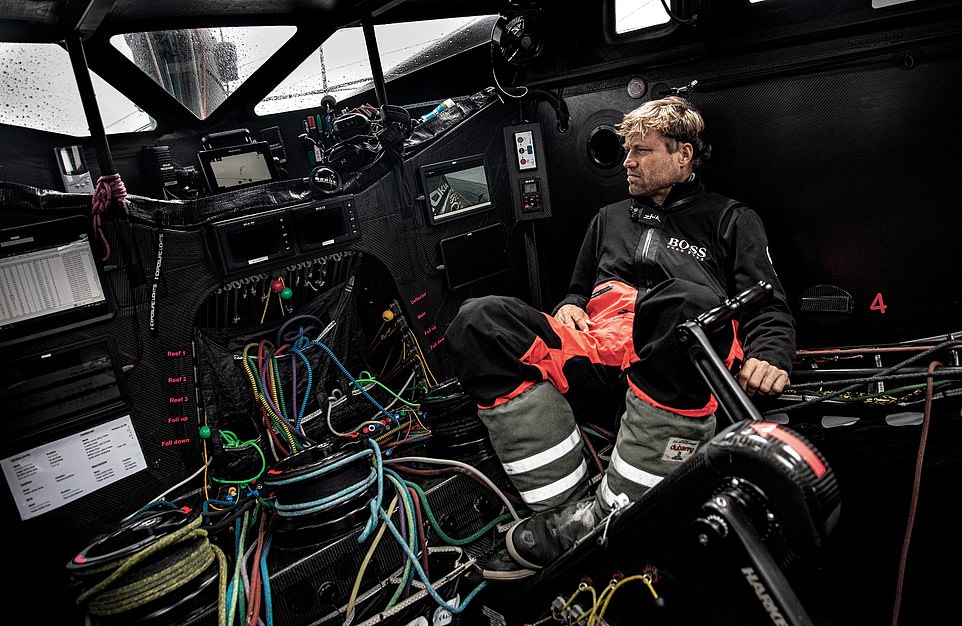 His personal infatuation with the race means this will be his fifth attempt to become the first non-Frenchman to win across nine editions. Mr Thomson inside the ‘cockpit’ of his boat

Every feature has been designed with Alex’s proportions in mind, from the height of the cabin windows to the yachtsman’s bespoke chair, which doubles as a bed ergonomically-designed to give him the sensation of floating, which is just as well, as he expects to spend up to 20 hours a day in it.

Peter says: ‘What is so advanced about this design is that we have wrapped the boat around the skipper instead of seeing a boat as something the skipper sits on top of.’

Alex won the Clipper Round The World Race when he was just 25. This is his fifth Vendée Globe. He didn’t complete the first two, then took third place in 2013 and came second at the last outing with a time of 74 days, 19 hours and 35 minutes, a British record.

Most of his food comes in the form of high-protein, dehydrated meals prepared on a small gas ring with boiling water taken from the sea and purified in a desalination device powered by solar panels. He is consuming up to 7,000 calories a day — 4,500 more than the daily recommended intake for a man — yet he is expected to lose about two stone (13 kg) during the race.

The sailor has backing from fashion brand Hugo Boss for the race. Mr Thomson won the Clipper Round The World Race when he was just 25 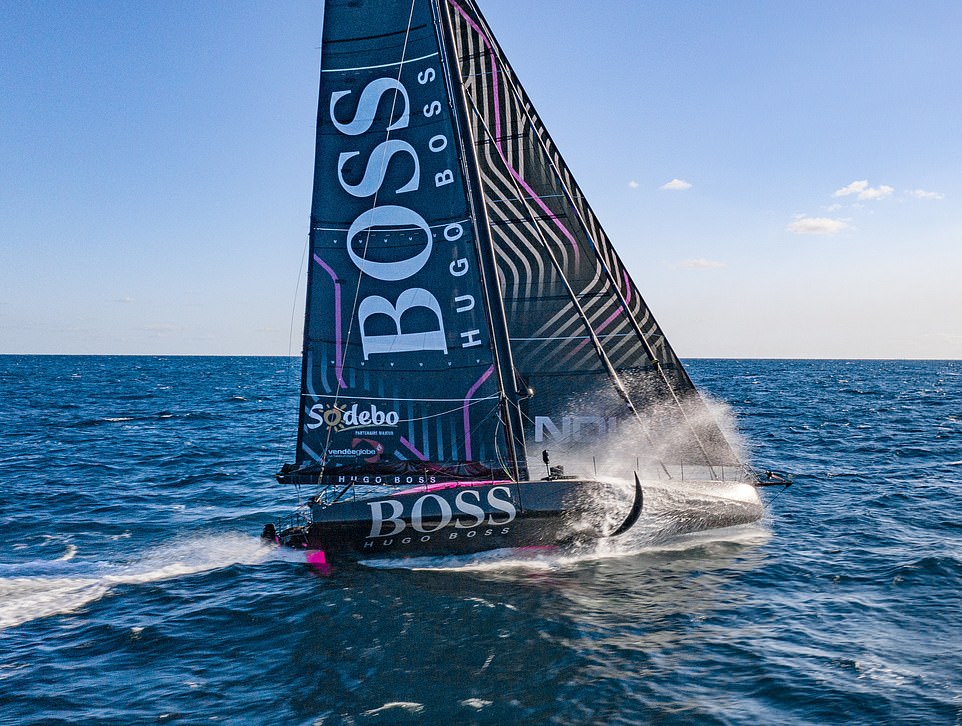 As a father of two young children in an inherently dangerous sport, Thomson admits it is getting ‘harder’ to leave the dock with age, and it is natural to speculate if his two-decade obsession with this race would end with a victory 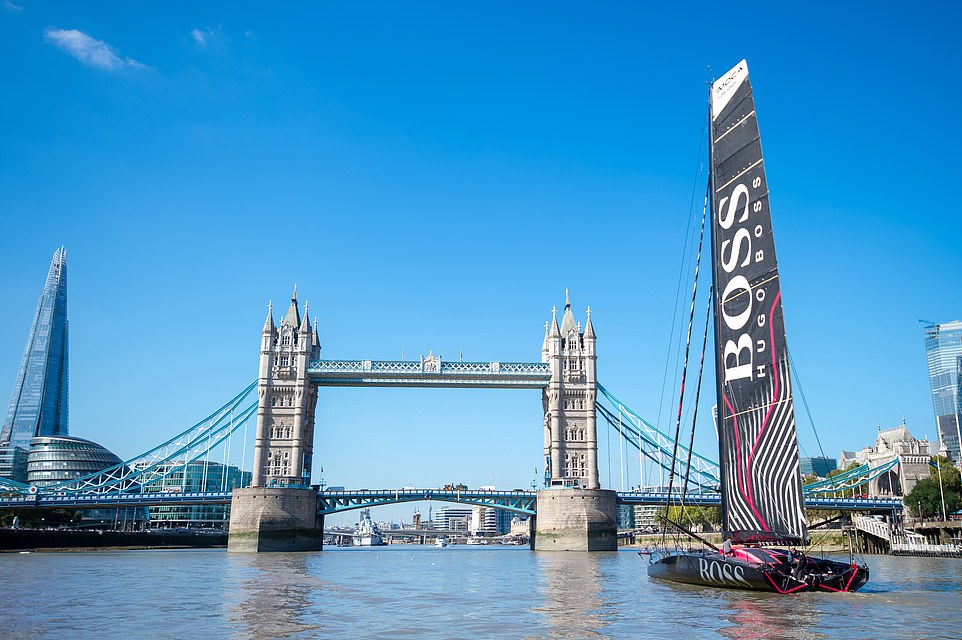 His biggest challenge is a lack of sleep. Before the race, he trained himself to sleep for 20-40 minutes every two to four hours.

Sports psychologist Ken Way, who hypnotised him to withstand it, says: ‘He would go under for 20 minutes or so and then I would set off one of the alarms inside the boat and he would wake up, brilliantly alert and ready to go. After a while, he was able to do it without the hypnosis . . . He has never been in better shape.’

Back home in Gosport, his wife, Kate, and two children, Oscar, nine, and Georgia, six, certainly hope so as they watch and wait, hoping for his safe (and victorious) return.

Nancy Pelosi Calls to Do away with Filibuster to Codify Roe , Kamala Harris Disagrees

House speaker Nancy Pelosi recently termed for the elimination of the legislative filibuster “so that we can restore women’s fundamental rights” right after the Supreme Courtroom overturned Roe...

The Queen greeted supporters in Scotland with a wave and a smile as she arrived in Edinburgh as aspect of her first outing considering the fact that the...