A hilarious poster for a missing cockroach named Colin has gone viral online, with many claiming they have seen the missing insect in their homes.

The joke flyer found on a Sydney power pole asking ‘Have You Seen Colin?’, was posted on Reddit to the amusement of users.

Colin’s ‘owner’ pleaded for help to find him as he had been missing for more than a week because of ‘excessive Covid protocols in our kitchen’.

A ‘substantial cash reward’ was offered for anyone who can identify Colin by his ‘one antenna that is slightly shorter than the other’. 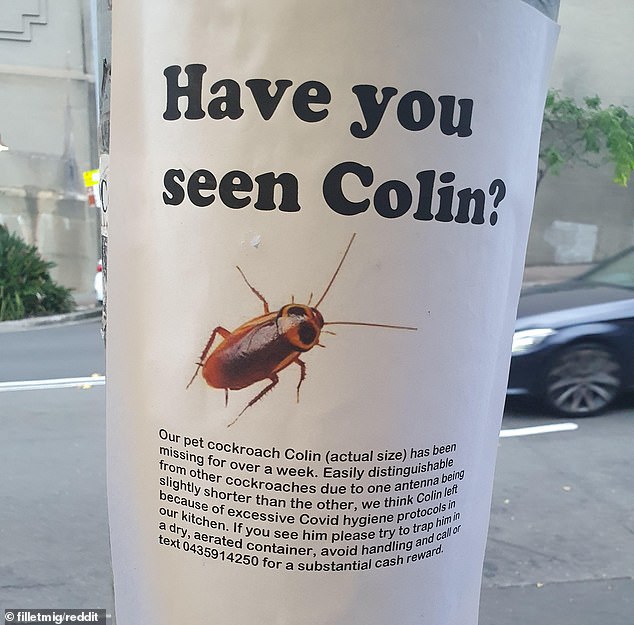 The hilarious flyer was posted onto Reddit, asking users if they have seen their pet cockroach named Colin (pictured)

But a warning was issued to the public to avoid handling the cockroach, and instead place him in a container and call the owners right away.

Users were quick to comment on the missing roach’s poster, with many claiming they have recently seen Colin the cockroach.

‘I saw a roach at Mounties that looked like that but a bit smaller’, one said.

Other users said they have found Colin’s family in their own homes.

‘I saw his friend Charlie in my kitchen today’, another said.

Jake Ball: Lock to quit Wales and Scarlets at end of season

Jake Ball: Lock to quit Wales and Scarlets at end of season