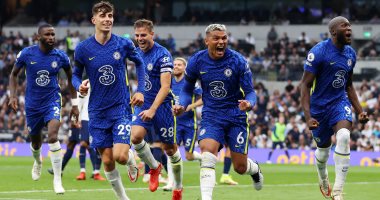 The Chelsea team achieved many remarkable numbers, after its precious victory over its host, Tottenham Hotspur, 3-0The match that brought the two teams together, in the London derby, at the “Tottenham” stadium, in the top of the fifth round of the English Premier League competition for the current season 2021-2022.

For the first time in its history, Chelsea have won 6 consecutive derbies away from home in the Premier League.

– Thiago Silva (36 years and 362 days) became the second-oldest player to score in a Chelsea shirt in the Premier League, after Ivorian Didier Drogba (37 years and 42 days) in 2015 against Leicester City.

The oldest player to score in the Premier League this season is Thiago Silva vs Tottenham (36 years, 362 days) – Cristiano Ronaldo vs West Ham – (36 years, 226 days).

– Chelsea He won all three of his matches against Tottenham at his new home in the Premier League.

– For the first time since the 2015-16 season, Harry Kane has not scored a goal in the first four rounds of the Premier League.

– N’Golo Kante has scored his first goal in 49 Premier League games, since he scored against Manchester City in November 2019. Three of his last four goals in the tournament have come from outside the penalty area.

– Marcos Alonso participated in three goals in his last four matches against Tottenham in the Premier League (scoring 1 and making 2).

Chelsea have kept 15 clean sheets more than they conceded (14) in the Premier League under the leadership of Thomas Tuchel.