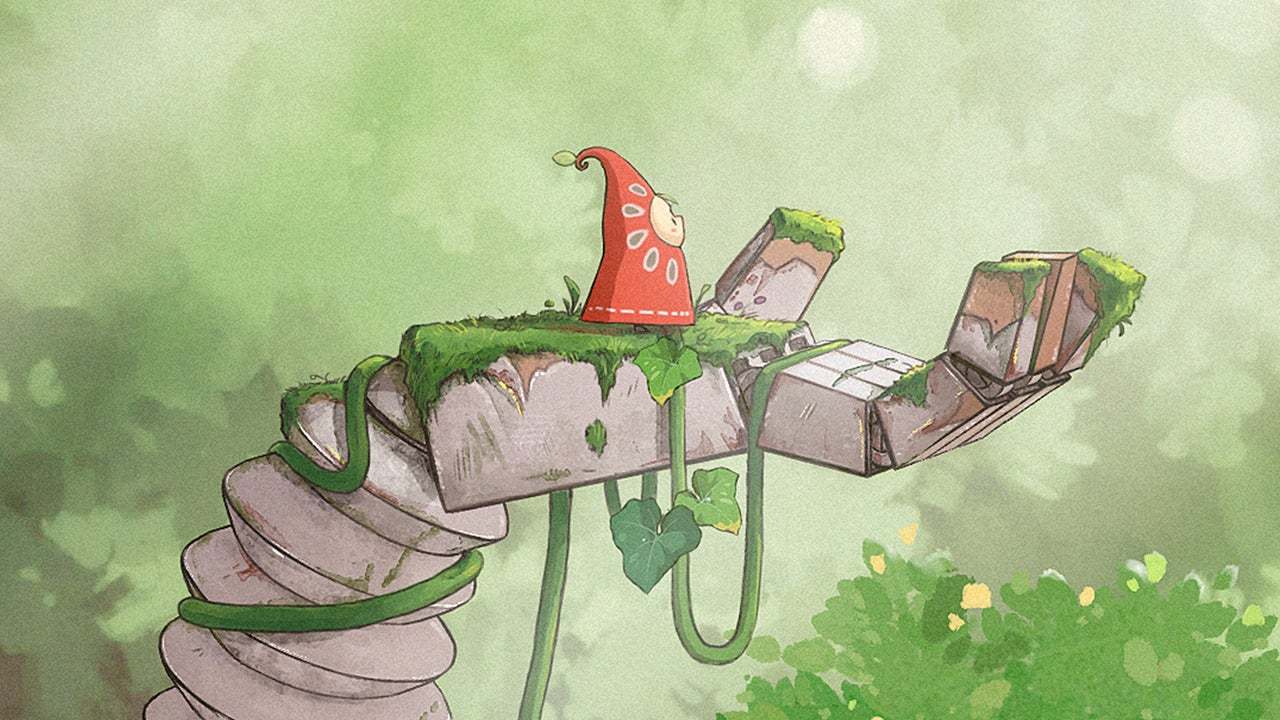 Games with Ghibli vibes are becoming more prevalent these days, but so far, the closest I’ve gotten to feeling like a Ghibli protagonist floating in a summery field of grass has been with Hoa, a new platforming game from Vietnamese studio Skrollcat.

Hoa’s inspirations are clear the moment the game starts, with a tiny protagonist floating dreamily to an island upon a single leaf before wordlessly beginning to explore. Without exposition, the titular Hoa begins to explore a world of sunlight filtered through green, gentle bug friends, hanging flowers and vines, sparkling cave systems, and soft, natural beauty. It’s all done in a hand-painted style clearly nodding to its animated inspirations, and underscored by a tender, fully orchestrated soundtrack that, yes, directly hearkens to the musical vibes of Joe Hisaishi.

Creators Son Tung Cao and Son Tra Le tell me how Hoa was inspired by their own personal experiences together. The two met in 2017 at Singapore’s Nanyang Technological University, where Son Tung was working in the university’s game lab and Son Tra was finishing up her animation studies.

At the time, Son Tung was already passionate about beautiful platforming games. Inspired by the likes of Trine and Limbo, he approached Son Tra with a simple idea: a girl, and a close tie with nature. Son Tra began sketching.

After a number of concepts of girls with little leaves on their heads, they eventually came to the design of the character Hoa, and began expanding their exploration to the world she might live in and the creatures that might inhabit it. Fortunately, inspiration was not far off — the two were surrounded at all times by nature.

“Hoa and her journey reflects the experience and life we’ve been living, especially during our time in Singapore,” says Son Tung. “The university we studied and worked in is in the middle of a forest, so we had trees and nature everywhere. Every morning when we went to school, you could see a lot of animals running around. We spent a lot of time in nature there…taking our sketchbook outside and looking at the trees, doing sketches, and breathing the fresh air. The game is about taking a stroll in the forest, enjoying the mood, being very carefree, relaxed, and playful.”

And just as Hoa’s environment and world was inspired by their own, Son Tung and Son Tra tell me that her character and the themes of the game were inspired by the each other’s kind and caring nature.

As we speak, Son Tra is complimentary of her colleague: “Tung is very caring, he’s always positive and easygoing and he makes others feel good.”

But Son Tung has a specific story he likes to tell that he believes ultimately influenced Hoa’s tone, one he says he thinks he’ll remember for the rest of his life.

Hoa is about the little things…being observant, and being caring.

“Not long after I met [Son Tra] for the first time, we were walking around the school,” he says. “And at our school there are a lot of snails crawling on the pathway, and people will just step on the snails, because they don’t pay attention. So Tra, when we were walking, she saw a snail, she tried to pick him up and put him in the grass on the roadside so he would not get stepped on. And this didn’t just happen once, but every time she saw a snail she did that. And it just struck me that she’s a very caring person. When we created the characters [in Hoa], all those memories we just poured into it unconsciously.”

For Son Tra and Son Tung, Hoa has been a challenge — a pleasant one, but a challenge all the same. It’s their first game together as Skrollcat, and as Son Tung points out, the animation studios that inspired the game are staffed with auteurs who have 20, 30 years of experience. The two weren’t just trying to recreate the themes of films like My Neighbor Totoro and Princess Mononoke, they wanted the feelings those worlds conveyed visually as well. But to do that, they had to learn to recreate the art style in just a few months of careful study and practice. It was difficult, Son Tung says, but he feels they’ve achieved a look they can be proud of.

“Hoa is our first adventure,” he continues. “Like Hoa, we decided to go into something we didn’t really know very clearly about. But it’s because we didn’t know a lot of things about it we had the courage to go in, do it, and find a solution along the way. We’ve been very lucky to have a lot of friends — careful, kind, and gentle friends — who will support us and guide us along the way.”

Hoa is a very brief journey, not much longer than the movies that inspired it, with a message of harmony with nature and, as Son Trung emphasizes, the “joy of pure discovery.” The two want to evoke the feeling of being a child again, experiencing the world with curiosity and fresh eyes. Floating on the back of a ladybug or tip-toeing my way along a spider web with the protagonist’s tiny, cute feet, they’ve at least succeeded for me (and, it seems, for our reviewer.)

The Top Gun: Maverick expansion for Microsoft Flight Simulator has technically been delayed as a result of the movie's recent delay. Asobo Studio and Microsoft have been clear...