The world is marking Holocaust Memorial Day in the midst of the pandemic today as memorial events take place online and vulnerable survivors shield from the coronavirus on the 76th anniversary of Auschwitz’s liberation.

The Auschwitz museum is holding a virtual event emphasising the fate of the 200,000 children who were murdered at the Nazi death camp, where only 700 youngsters remained alive when the Red Army arrived on January 27, 1945.

The survivors who were young then are now among the most vulnerable to a disease that preys on the elderly, especially because many of them suffer medical problems caused by their inhuman treatment at German hands.

German chancellor Angela Merkel will speak at an online event later with the UN-secretary general, while parliament is meeting for an in-person commemoration in Berlin where Hitler’s regime oversaw the genocide of six million Jews.

Pope Francis called for remembrance today while Israel’s president Reuven Rivlin will join a virtual event in a country where many Holocaust survivors have already been inoculated against Covid-19 a world-leading vaccine drive.

Hundreds of surviving victims in Austria and Slovakia were also poised to get their first vaccines on Wednesday to mark the anniversary. 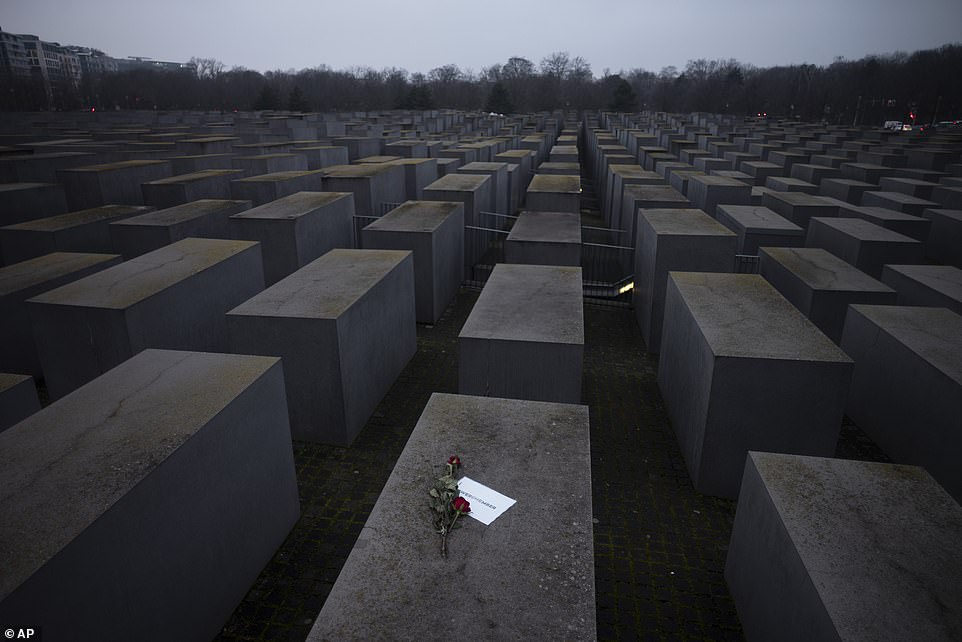 GERMANY: A rose was left in tribute this morning on one of the blocks that make up the Holocaust memorial in Berlin, officially the Memorial to the Murdered Jews of Europe 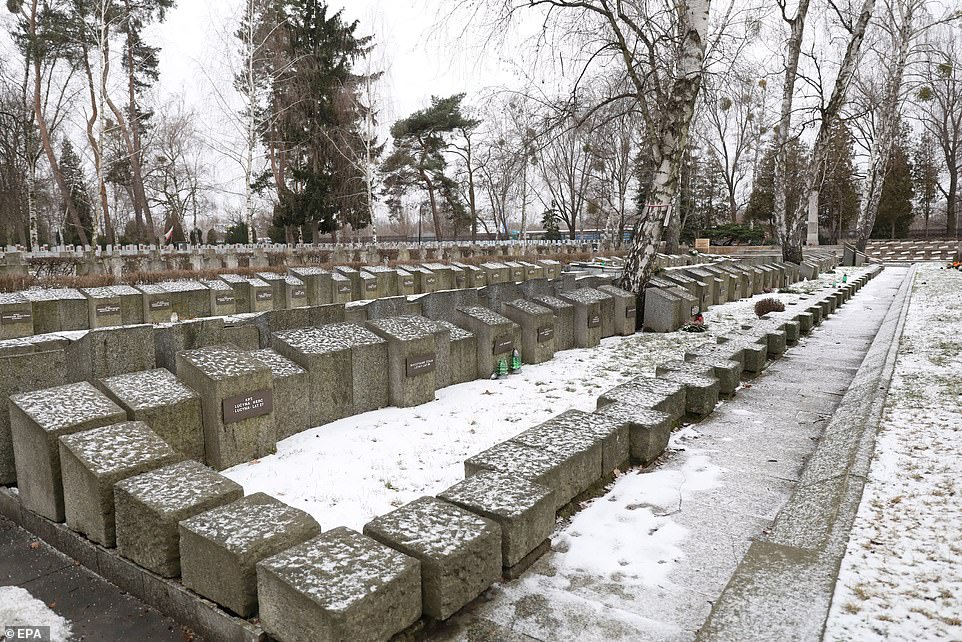 POLAND: A mass grave at a military cemetery in Warsaw is seen this morning as the world marks a virtual Holocaust Memorial Day due to the pandemic 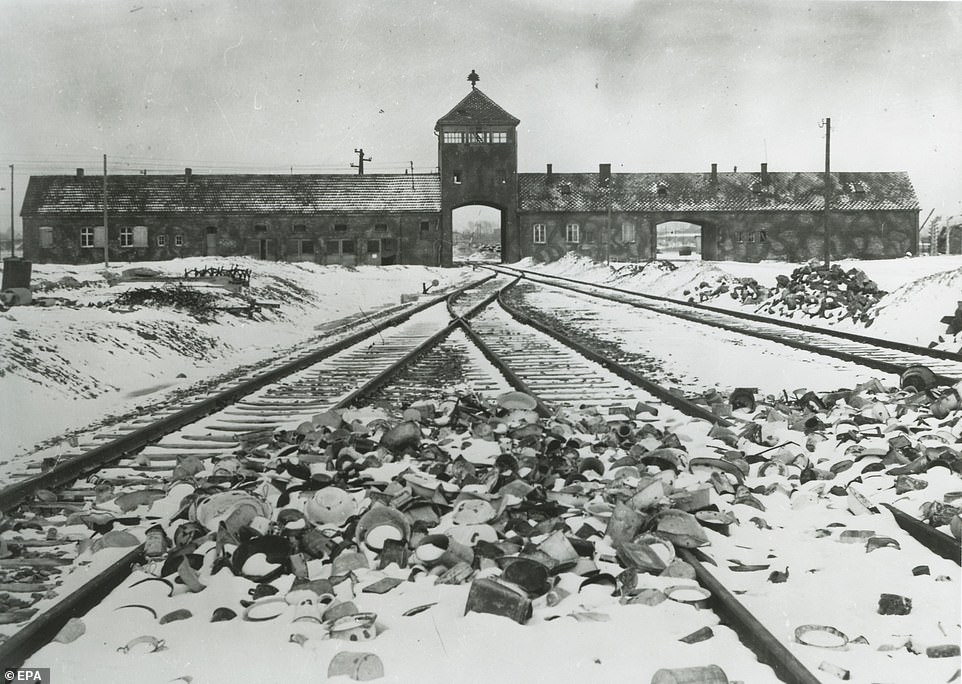 Auschwitz, pictured in 1945, was liberated by Soviet troops 76 years ago on Wednesday after around 1.1million people were murdered at the Nazi extermination camp

The president of the European Jewish Congress said on Monday that some Holocaust survivors had died alone or suffered ‘extreme isolation’ because of the pandemic.

‘Throughout their lives, they have shown mighty strength of spirit, but in the current crisis, many have sadly died alone and in pain,’ Dr Moshe Kantor said.

‘Therefore, I call on European leaders to ensure that Holocaust survivors have access as soon as possible to a safe and effective vaccination and with the highest priority.’

He also warned that conspiracy theories and extremism had spread during the pandemic, alluding to how social and economic crisis helped bring Hitler to power and thereby unleash the Holocaust.

‘The pandemic has created the social conditions where antisemitism and extremism thrive,’ he warned.

The main theme will be the fate of children in Auschwitz, who made up nearly a fifth of the 1.1million people killed at the extermination camp.

‘The adult world – after all, so often unjust and cruel – has never demonstrated so much of its heartlessness, its evil.

‘This cannot be justified by any ideology, reckoning or politics. This year we want to dedicate the anniversary of liberation to the youngest victims of the camp.’ 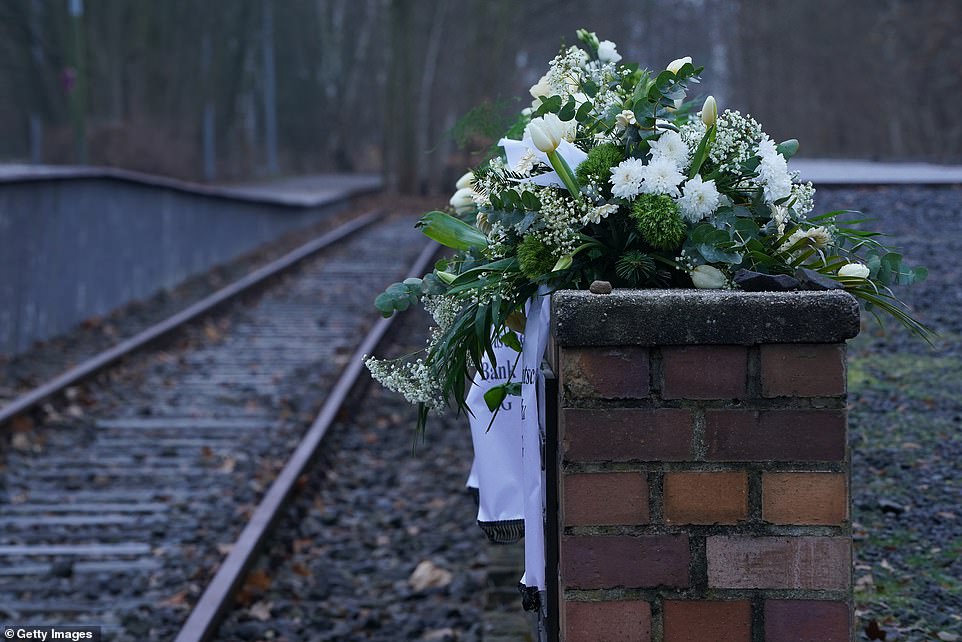 GERMANY: Wreaths are left at the ‘Platform 17’ memorial in Berlin to commemorate the deportation of Jewish victims on the German railway network 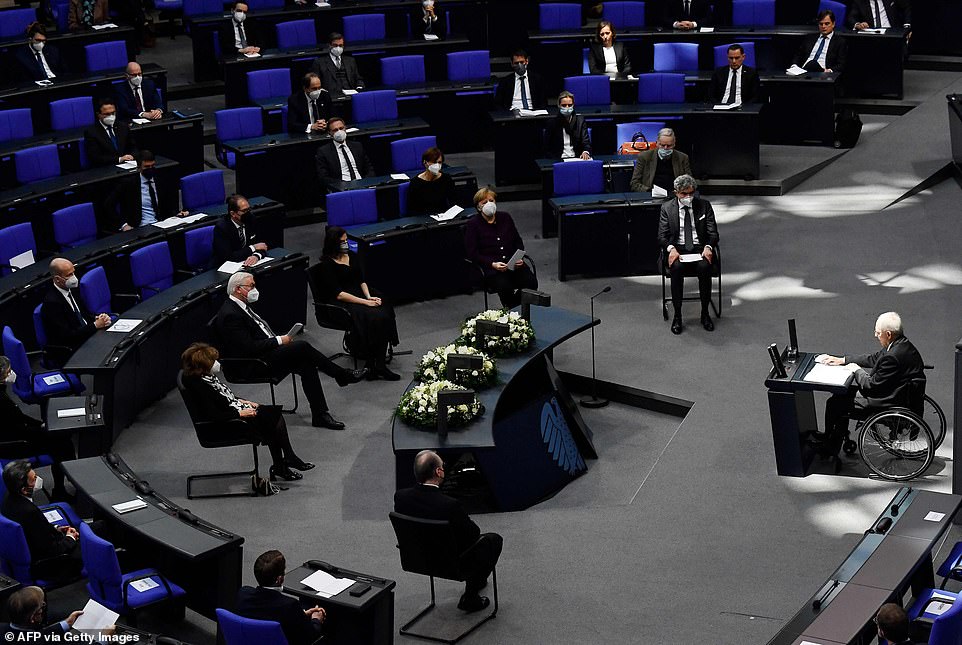 GERMANY: Chancellor Angela Merkel and president Frank-Walter Steinmeier were among the dignitaries at a special session of parliament in Berlin this morning to mark the anniversary 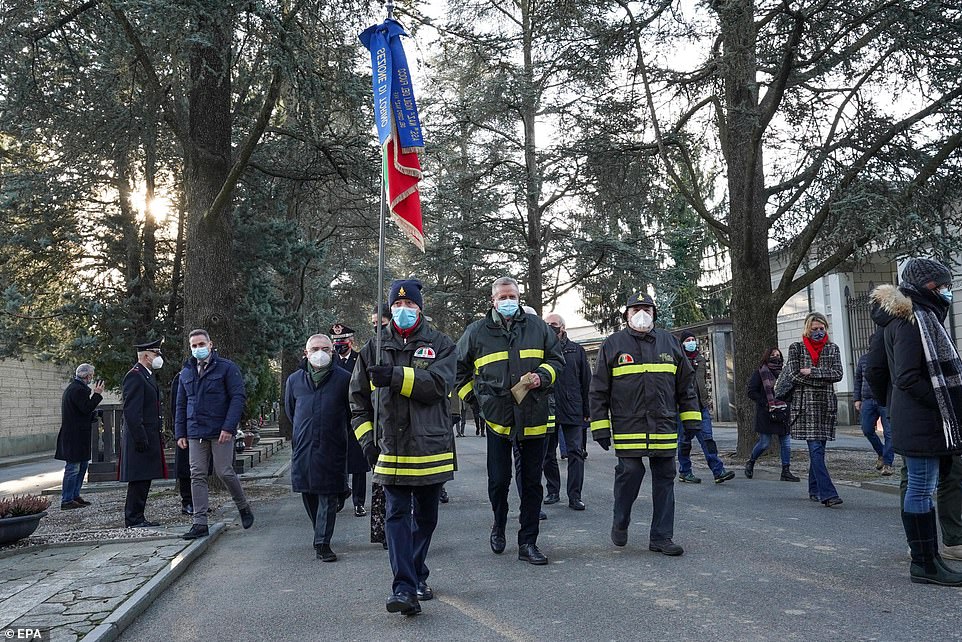 ITALY: People pay tribute to Holocaust victims at a ceremony in Turin on Wednesday morning, in one of the few in-person events to take place on the anniversary 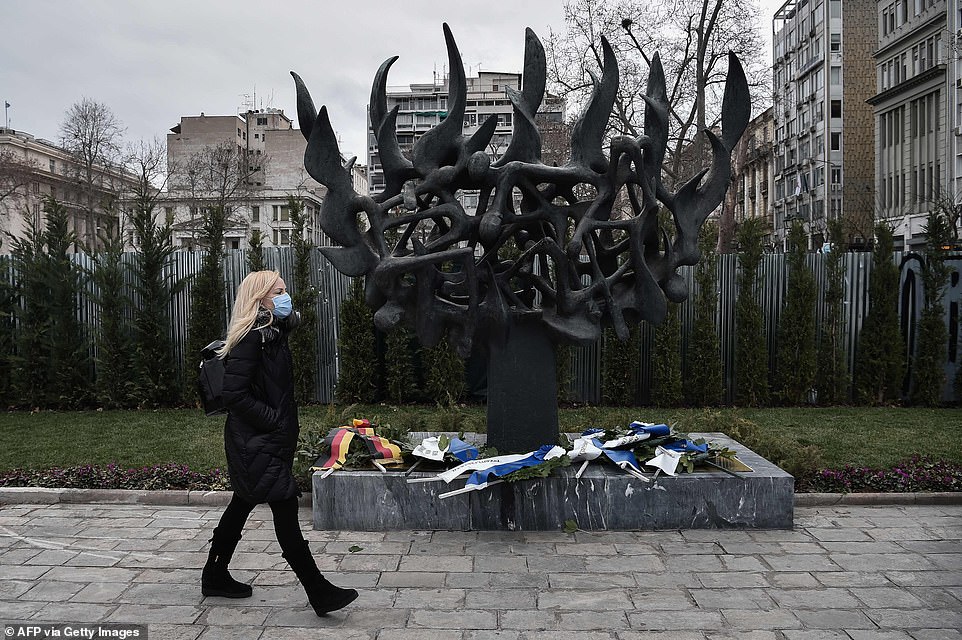 GREECE: A woman walks past a Holocaust memorial in Thessaloniki on the 76th anniversary today

While many commemorations have moved online for the first time, one constant is the drive of survivors to tell their stories as words of caution.

‘We have to tell our stories so it doesn’t happen again,’ 91-year-old survivor Rose Schindler said on Monday from her home in California.

‘It is unbelievable what we went through, and the whole world was silent as this was going on.’

Friedman says she believes it is her role to ‘sound the alarm’ about rising anti-Semitism and other hatred in the world, otherwise ‘another tragedy may happen.’

That hatred, she said, was on clear view when a mob inspired by former US president Donald Trump attacked the US Capitol on January 6.

Some insurrectionists wore clothes with anti-Semitic messages like ‘Camp Auschwitz’ and ‘6MWE,’ which stands for ‘6 million wasn’t enough.’

At the Vatican today, the Pope marked the anniversary by urging people to watch out for extremism because ‘these things can happen again’.

‘To remember also means being careful because these things can happen again, starting with ideological proposals that claim to want to save a people but end up destroying a people and humanity.’

In Germany, the government says it wants to use the digital format to ‘reach more people than ever’ and educate them about the Holocaust.

‘Millions of people were victims of the Nazis. That makes the repeated efforts to exploit, relativise or forget that suffering for political purposes all the more unbearable,’ said German culture minister Monika Gruetters.

Angela Merkel will give the keynote address later at an online event organised by the UN, UNESCO and the International Holocaust Remembrance Alliance (IHRA).

The ceremony will be followed by a panel discussion on Holocaust denial involving a survivor of the genocide and leading historians. 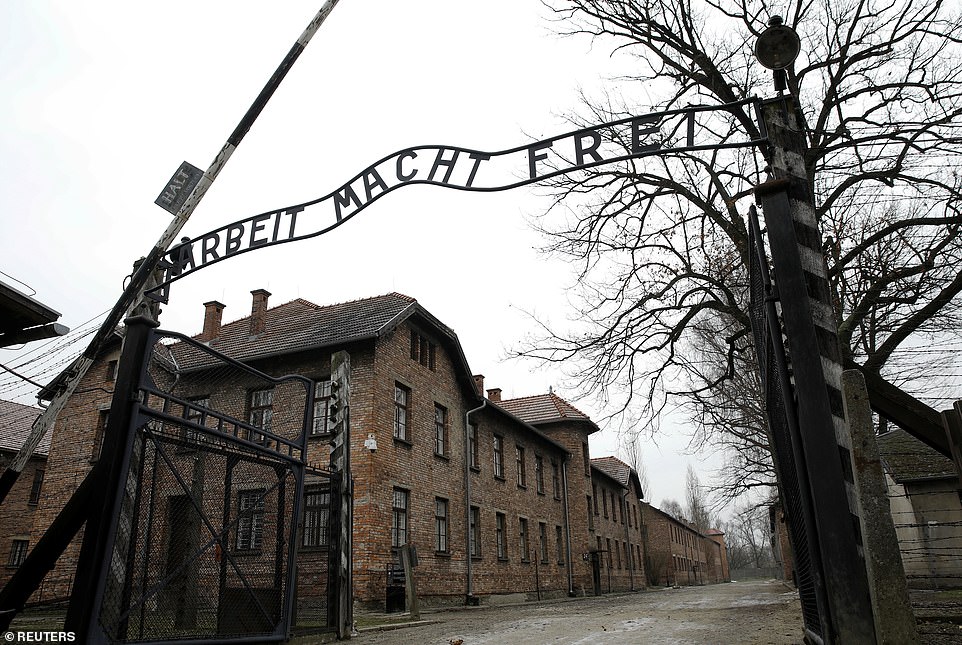 POLAND: The entrance to Auschwitz, with its infamous sign saying ‘Arbeit Macht Frei’ or ‘Work sets you free’, is seen on Monday ahead of the anniversary 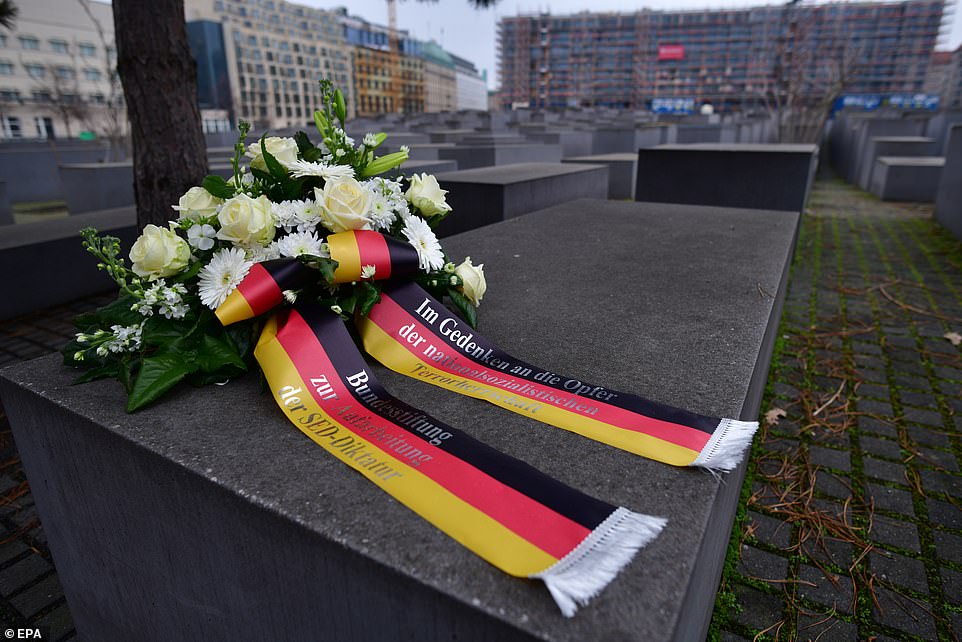 GERMANY: Flowers decorated with a ribbon in the colours of the German flag are left at the Berlin Holocaust memorial on Wednesday morning 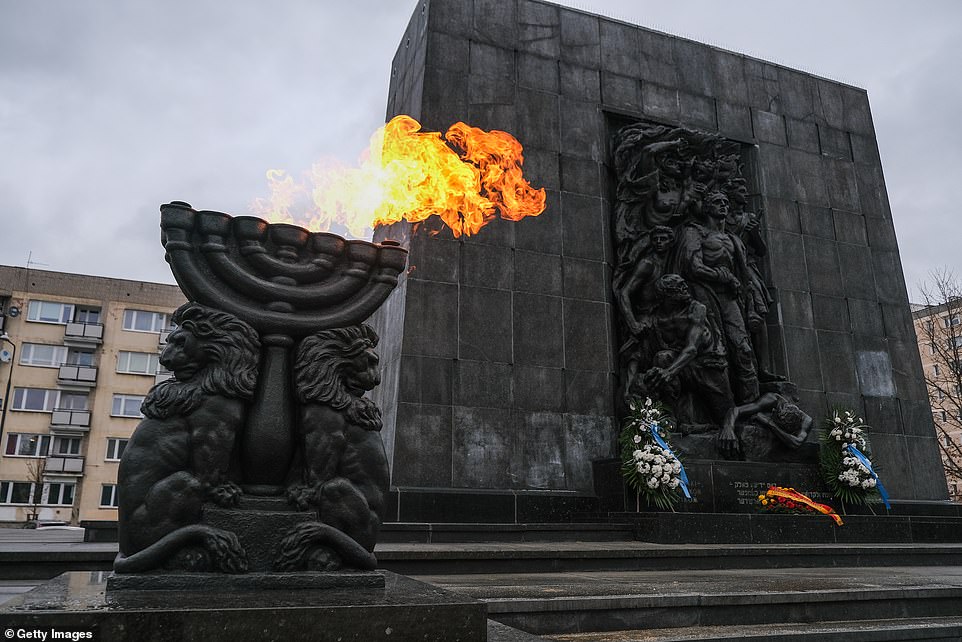 POLAND: Wreaths lie in front of the Monument to the Ghetto Heroes in Warsaw on Wednesday

‘This is because remembrance ties us fundamentally to the facts, to what took place and the people it affected.

‘When we remember, when we strive to reflect upon this suffering, we understand that as unimaginable as it is, it is just as undeniable.’

Merkel and German president Frank-Walter Steinmeier were present at a special session of parliament in Berlin this morning where lawmakers were due to hear from a survivor who later became president of Germany’s top Jewish organisation.

In Austria, more than 400 survivors were expected to get a coronavirus vaccine at Vienna’s largest vaccination centre to mark the memorial day on Wednesday.

Mostly in their 80s or 90s, many of them were being brought in by shuttle or ambulance while others were escorted by their children.

‘We owe this to them,’ said Erika Jakubovits of the Jewish Community of Vienna. ‘They have suffered so much trauma and have felt even more insecure during this pandemic.’

Jakubovits organized the vaccination drive with the Austrian health ministry and officials in Vienna, where twelve Jewish doctors volunteered to give the vaccines.

In a similar project to that in Vienna, the Jewish community of Bratislava in Slovakia was also set to vaccinate survivors on Wednesday.

‘We’re very, very grateful that the vaccinations are taking place on this symbolic day,’ said Tomas Stern, the head of the Jewish community in Bratislava.

Some 128 survivors were to receive their first shot at Bratislava’s Jewish community center on Wednesday and another 330 across the country in the coming days.

In Israel, home to many Holocaust survivors, more than 80 per cent of those over 70 have already received at least one dose of the vaccine, and nearly 60 per cent have received the second dose.

Because Israel’s vaccination campaign has moved so quickly, there was no need to single out Holocaust survivors.

Still, about 900 Holocaust survivors died of Covid-19 in Israel last year before vaccines were available and about 5,300 survivors were infected, according to Israel’s national statistics office.

Between the evictions, job losses and worsening hunger … this is what Biden inherited from economic chaos