The 47-year-old homeless man confronted the two diners outside of Think Coffee in NoHo, telling them they ‘were being disrespectful for not giving him money’, according to the New York Post.

He then allegedly shoved the 61-year-old to the ground and hit the 75-year-old in the side, before fleeing.

The victims suffered minor injuries but they both refused medical attention at the scene.

The incident joins a string of recent attacks by homeless people in New York City amid a harrowing surge in crime.

The incident comes just days after former mayoral candidate Andrew Yang came under fire for remarks he made about homeless people.

In the last mayoral debate last week, Yang made an impassioned plea to get more treatment for mentally ill homeless people.

‘Yes, mentally ill people have rights, but you know who else has rights? We do – The people and families of our city,’ he said. ‘We have the right to walk the streets and not fear for our safety because a mentally ill person is going to lash out at us.’ 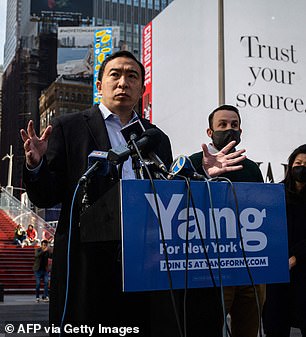 He added that ‘mentally ill homeless men are changing the character of our neighborhoods’ and that families are fleeing the city as a result.

He further claimed a friend of his wife’s had recently been ‘punched in the face by a vagrant in [the Manhattan neighborhood of] Hell’s Kitchen’.

‘This is happening in New York City, and we’re not talking enough about it. We owe people and families better than this,’ he blasted.

Yang vowed to double the number of ‘psych beds’ in the city, and stated: ‘There will be no recovery until we resolve this’.

However, the other Democrat candidates – most of whom are further left- have hit out at Yang’s remarks.

Candidate Scott Stringer snapped, saying: ‘You can’t say, “Psych beds for all”. This is a teaching moment. This is not how the next mayor has to comport themselves.’ 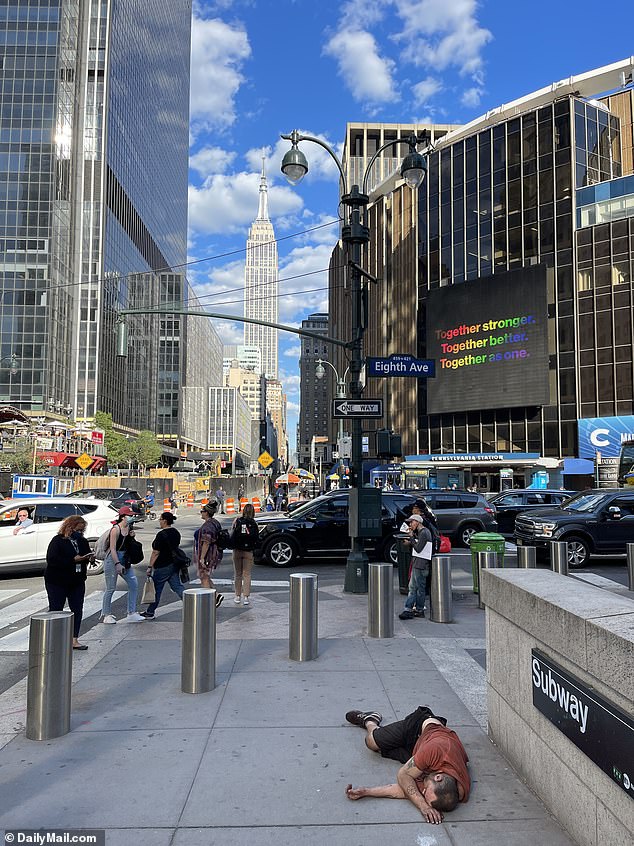 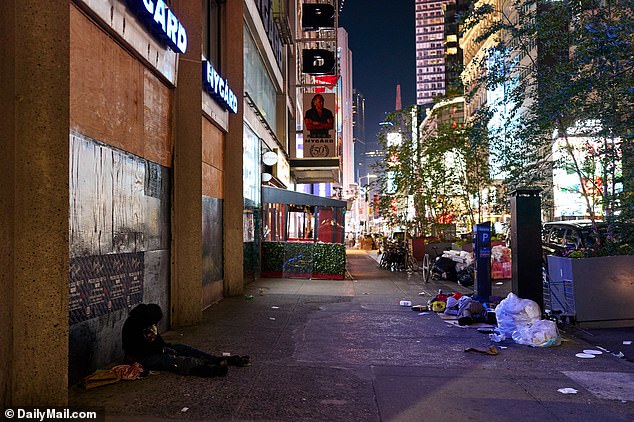 Homeless people are seen sleeping near West 40th St. and Broadway on Thursday. Crime in the area has spiked 170% 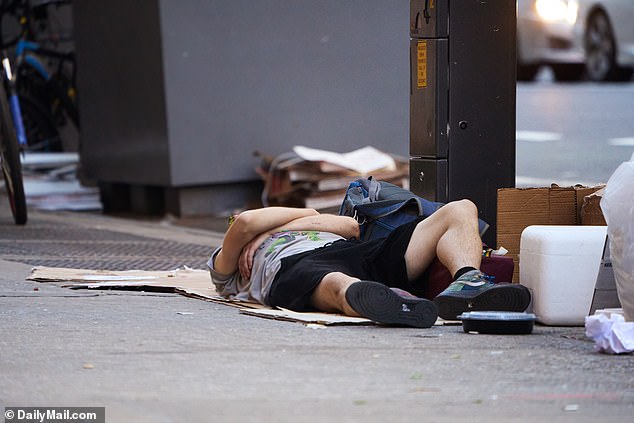 People slept on the streets near the intersection of West 40th St. and Broadway on June 17

Yang ultimately dropped out of the race on Tuesday, as violent crime continues to increase.

The Manhattan South police district – which includes the area around tourist-heavy Times Square and Penn Station – has spiked by 170 percent compared to last year’s figures.

Pictures taken by DailyMail.com on Thursday showed homeless people in the area sleeping on sidewalks without shoes, using drugs and drinking alcohol, or passed out next to empty or smashed bottles.

People in the city have been slashed and punched in the face, spit at, pushed onto subway tracks and stabbed with box cutters – all in recent months and each time by random strangers who were seemingly out of their minds.

Yang said he’d been an ‘advocate for mental health’ and said he’d gone to counseling as a younger person. But, he said, mental health issues aren’t an excuse for violence – and he pointed to what he said was the sharp rise in anti-Asian hate crimes, half of which he said had been perpetrated by mentally ill people.

‘We need to get them compassionate comprehensive care – and not let them languish on our streets,’ Yang said in a tweet.

He didn’t release a detailed plan on how he’d do that, but, as the state and city moved away from institutionalizing those with serious mental problems, they left behind huge facilities – many of which are now little-used: For instance, the 17-story Manhattan Psychiatric Center, a state-run mental hospital on Wards Island in the East River, has more than 500 beds, but is only using about 200, according to state records. 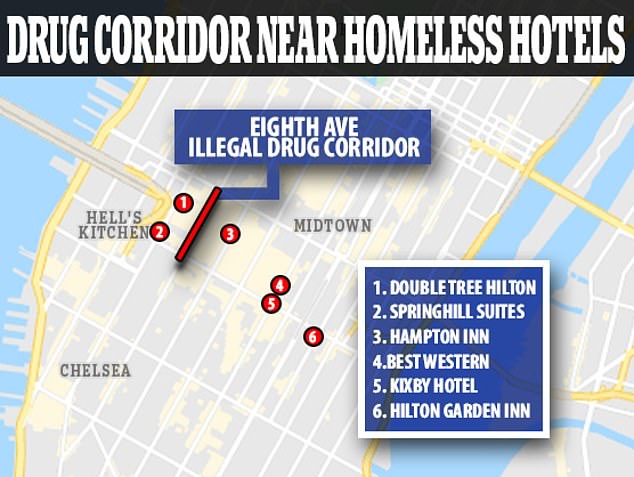 The NYPD have now set up a command post and metal barriers in Midtown Manhattan in a bid to crack down on violent crime that is being fueled, in part, by an illegal drug market between Penn Station and Port Authority Bus Terminal. Police say crime has spiked in that area after hundreds of homeless were rehoused there in hotels during COVID

For months residents living near the hotels where around 8,000 homeless people have been housed have implored the city to relocate them. They blame the homeless for bringing crime and drug use to their front door

Many of the newcomers, living in nearby hotel rooms contracted by the city, have been largely inconspicuous. But others with mental health and drug problems have become a growing presence in the Hell’s Kitchen neighborhood and adjacent Times Square.

And now, as the city looks to welcome back tourists and office workers with the measures introduced for the pandemic lifting, suburban commuters and residents say there is a palpable difference from the New York they knew before much of the country locked down in March 2020.

Giselle Routhier, policy director for the Coalition for the Homeless advocacy group, faulted the state and city for not providing enough mental health services and for ‘shuffling people’ between locations.

‘What we actually need for the city to do is to offer folks on the streets access to single occupancy rooms where they can come inside and feel that they’re safe from the elements and from the spread of the coronavirus,’ she said.

Longer term, the city needs ‘more robust housing production for extremely low-income and homeless households, particularly for single adults,’ many of whom were pushed into homelessness by the economic fallout of the pandemic, Routhier said.

Several of the more than a dozen Democrats running for mayor in next Tuesday’s primary election also have called for converting hotels into housing for the homeless.

As the pandemic raged last spring, the Department of Homeless Services (DHS) relocated 10,000 people from crowded shelters to 67 hotels whose tourism, business and convention bookings had dried up.

Over 20 percent were packed into hotels in the Chelsea and Hell’s Kitchen neighborhoods west of Times Square and the Theater District, the New York Post reported, citing a letter from Manhattan Borough President Gale Brewer that it had obtained.

Residents there then started to complain about an alleged rise in lewd activities and drug use in their neighborhoods.

‘We heard the complaints from the communities and that’s why we increased the (police) presence,’ said Terence Monahan, a senior adviser to Mayor Bill de Blasio for COVID-19 recovery and safety planning who retired earlier this year as the NYPD’s chief of department. ‘People need to feel safe.’