This is the horrifying moment a Texas man shot his partner’s ex-husband dead during a furious child custody row outside of his home earlier this month.

The incident in Lubbock, Texas on November 5 centred around a custody dispute over the children of Chad Read and his ex-wife Christina Read.

Chad Read’s widow Jennifer Read has alleged that her husband was killed by Kyle Carruth, who is reportedly the new boyfriend of Christina.

However, Carruth has not been charged by police over the incident with his lawyers arguing that the killing was ‘justifiable homicide’ and done in self defence.

Through her attorney, Jennifer Read released a statement along with the footage that shows the moment her 54-year-husband Chad Read was shot and killed.

The footage, captured by Jennifer Read from a car on the street outside Carruth’s South Lubbock home, shows Chad Read arguing with his ex-wife and another man, reportedly Carruth. 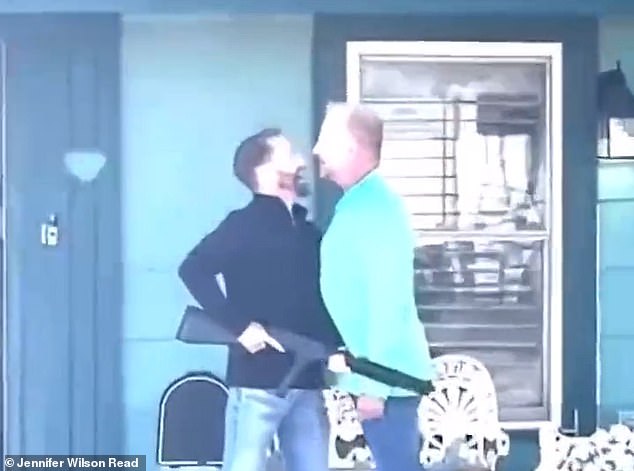 Pictured: Two men, said to be Kyle Carruth (left in a black top and holding a rifle) and Chad Read (right wearing a teal top) are seen in a grab from mobile phone footage squaring off outside a home that reportedly belongs to Carruth

From the mobile phone video, it appears that Chad Read and Kyle Carruth are arguing on the porch of the house, with Christina Read standing to the right.

Kyle Carruth – wearing a black top and jeans – is heard telling Chad Read to ‘get off of my property’. Chad Read, who is wearing a teal top and jeans, gesticulates with his arms as Carruth turns around to go inside the house.

Chad Read turns around, and continues talking to Christina Read, telling her that he wants his son, who he was supposed to have custody of from 3:15 p.m that day, according to Jennifer Read in an affidavit filed after the incident.

‘I’m supposed to have him at 3.15,’ Chad Read is heard saying to Christina Read. ‘But you’re playing games telling me that I have to pick him up at six?’ 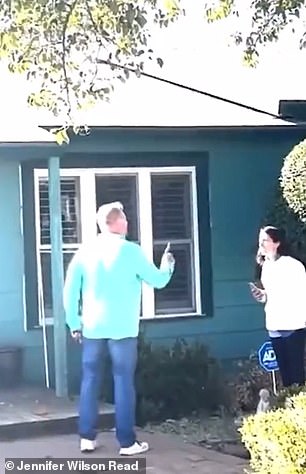 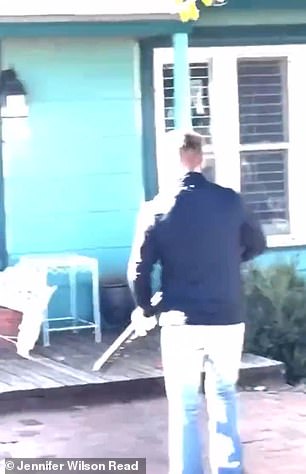 Carruth is then shown re-emerging from the house holding a firearm, which he’s holding down by his side, shouting ‘leave’ at Chad Read.

Chad Read is heard shouting back: ‘Use it mother f***er’, and squaring up to Carruth, threatening to take the gun from him.

Now face-to-face, Carruth fires one shot into the floor at the pair’s feet, which does not appear to deter Chad Read, who continues to push against Carruth.

Suddenly, Carruth jumps back away from the porch, raises the rifle and fires two shots at Chad Read, who slumps to the floor.

Carruth walks back to the porch and turns around to face the camera. Still holding the gun, he wags his finger as Jennifer Read is heard saying ‘I have it on video Kyle.’

‘I told all of y’all to leave,’ Carruth is heard saying, telling her that his son is not at the house. ‘None of y’all should be here, I asked you leave. I did everything. I did not want to do any of this,’ he says.

Carruth has not been charged over the incident. Carruth’s attorney, David Guinn, told KCBD that the shooting was done in self defence, saying that Chad Read was trespassing on his property, citing the Castle Doctrine.

Jennifer Read is now suing for custody of her step-children.

Children of the Rams’ Road Party: Choice is based on attendance and tact, and we are princesses