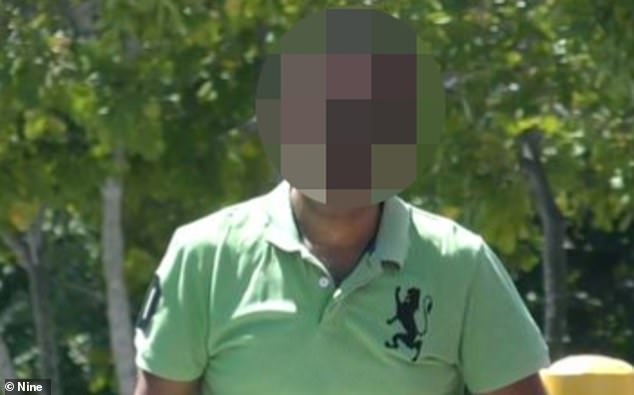 A family have revealed the horrific campaign of harassment they suffered at the hands of a neighbour, including creating fake adverts offering sexual favours that prompted strangers to turn up at their house.

A Queensland-based Telstra employee shared the family’s contact details online after a row over palm trees on their property got out of hand.

Before long, the couple were inundated with graphic sexual messages, as well as death threats aimed at their children and explicit texts.

He distributed their personal details online, prompting strangers to turn up at their home in the hope of receiving sexual favours and massages.

The family, who want to remain anonymous, told A Current Affair they were left incredibly distressed after the campaign of abuse, which lasted more than six years.

‘Our neighbours are absolutely wonderful, everyone gets on and this person has popped himself in there like a cancer and just eroded my enjoyment and my ability to feel safe in my own home,’ the mother-of-two said.

In 2014, the woman first started experiencing odd incidents when she tried to send and receive text messages.

What she assumed was a glitch became more sinister when an Apple worker called a number linked to the incidents, and a Telstra employee answered.

She later received a call from then Telstra CEO David Thoday, who explained that the glitch would be investigated.

While the strange phone incidents stopped, the woman later recognised the number involved when the neighbour launched a case with the Queensland Civil and Administrative Tribunal to try to force his neighbours to cut down their palm trees.

He claimed the trees interrupted his views of Brisbane city, and was desperate for them to be removed.

It was a lot more serious than I first thought

The couple said several of the trees had been ‘poisoned’ and ‘mutilated’ prior to receiving word of the complaint.

The neighbour had to send a letter formally letting them know about the case, and the victim immediately recognised the phone number in the letterhead.

‘As soon as I saw it, I said to my husband ”that’s the phone number” and that’s when I realised this was a lot more serious than I first thought,’ the victim said.

The woman called to discuss the matter with Telstra, but officials said there was no way to prove phone hacking had occurred.

But it wasn’t until the man’s QCAT trial fell through that the offending took an even more sinister turn.

The man posted an advertisement on Gumtree offering sexual services at his neighbour’s home, on the same day that she had tried to book a cleaner from the same website.

When she asked what experience he held for the job, he ‘proceeded to provide [her] with a litany of his sexual prowess’.

The woman suggested he’d called the wrong number, but he repeated it back to her and said he’d found the advert on Gumtree.

‘I said “what did it say?” and he told me it was entitled “sensual massage with a twist”, so I hung up on Kevin quite quickly,’ she said.

The panicked mother checked the website and began searching until she came across the explicit ad – which offered massage ‘and much more’.

She called her husband to explain the advert and the phone call.

‘I was really scared because I didn’t know what would happen… I was very, very upset I had two children at home and he said ‘don’t panic’,’ she recalled.

But moments later, ‘the first knock came at the door’ and a man was waiting.

The woman had to explain that the advertisement was in fact a sick prank, and asked him to leave.

As soon as he returned home, her husband began working to have the ad taken down.

But for every one he successfully removed, another would pop up in its place, again listing all their personal details.

‘It was rattling psychologically because we didn’t know when they were coming,’ the father-of-two explained.

‘We were trying to stop the ones that had been put up and as we thought we’d stopped them, another one would get put up on another website.’

By this point, the couple were at their wits end and tried to report the matter to police.

They claim police appeared disinterested in their claims, and that they were told to ‘place a sign on their gate’ to explain that the ad was false.

What sort of person would go after a child? His kids are the same age as mine.

It wasn’t until the couple received a death threat via email – also targeting their young children – that police were able to arrest the neighbour.

The email stated ‘all of your end is not far away’ and then included the initials of the couple’s children’s names.

The 48-year-old was charged with stalking, threatening violence and computer hacking.

Three years later, he finally faced the Queensland District Court last week, where he pleaded guilty to two charges of stalking with violence.

The hacking charge was dropped. 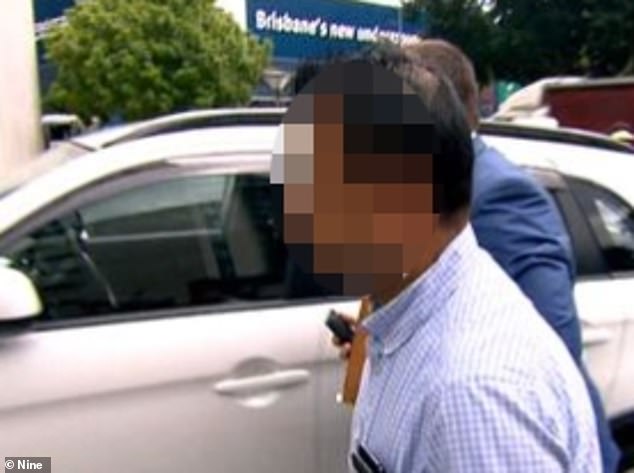 He finally faced the Queensland District Court last week, where he pleaded guilty to two charges of stalking with violence. The hacking charge was dropped

Judge Julie Dick noted the man’s offending was particularly ‘disturbing’ and ‘determined’ as he was sentenced to 18 months in prison, according to A Current Affair.

The sentence will be suspended after just four months actual time in custody.

While the couple and their children will now try to move past the six-year ordeal, they say Telstra has not been held accountable for ‘not putting a stop to this’.

A spokesman from the telecommunications company argued that the couple’s concerns were taken seriously and investigated.

‘In our investigations we found no evidence [he] had misused his access as an employee to Telstra’s network or customer systems,’ a spokesperson said.

‘We did identify that [he] had behaved in the workplace in a way that breached our company policies and this led to his dismissal from his role at Telstra.’

Timeline of abuse against the family of four

–  In 2014, the woman’s mobile phone first begins glitching, particularly when she tries to send and receive messages. She repeatedly receives messages from one number in particular, which she doesn’t recognise.

– She takes it to the Apple store, who call the number. A Telstra employee picks up the phone.

– The woman receives a call from then Telstra CEO, who says the matter will be investigated. The strange glitch stops.

– The family notice that palm trees near their house appear to have been ‘poisoned’. They then receive a notice from her neighbour which indicates he will be taking the matter to the tribunal to have the trees removed for ruining his view.

– The mother-of-two recognises the number in the letterhead as the number linked to her phone glitches. She suspects there is more to the story and reports the matter to Telstra, who vow to investigate further.

– Telstra officials say there is no evidence of tampering, and the matter is dismissed.

– Two years later, the woman posts an ad for a cleaner on Gumtree and begins receiving phone calls from men seeking her sexual services. She learns ads have been posted with her personal details.

– A man arrives at her home seeking a sexual massage ‘and more’ after her address was posted online.

– Her husband works to remove the ads, but more consistently keep cropping up.

– The family call the police to report the incident, but claim police couldn’t do anything to help them.

– The family receive a death threat via email, which is when police feel they have enough evidence to make an arrest.

–  In 2018, the neighbour was finally charged with stalking, threatening violence and computer hacking.

– Three years later, he finally faced the Queensland District Court last week, where he pleaded guilty to two charges of stalking with violence.  The hacking charge was dropped.

– Judge Julie Dick noted the offending was particularly ‘disturbing’ and ‘determined’ as he was sentenced to 18 months in prison. The sentence will be suspended after just four months actual time in custody.

A mysterious “wiggle” moves the poles of Mars