Horses can recognise their reflection in mirror and want to preen themselves, study finds 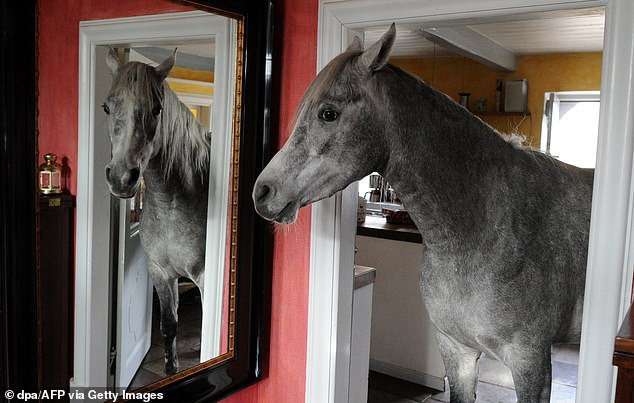 Horses pass the mirror test: Scientists discover horses have intelligence to recognise their own reflection and want to preen themselves just like humans

Horses have the intelligence to recognise their reflection in a mirror, a new study has discovered.

Scientists from Italy painted a small letter X on the faces of 11 of the animals who attempted to remove it once they realised it was there in a mirror.

The discovery means horses could be among the most self-aware creatures on the planet, alongside primates.

A few other species such as elephants and bottle-nosed dolphins have been noted recognising themselves but scientists do not know if species as a whole had the ability.

The study, published in the Animal Cognition journal, suggests horses have the same self-awareness only seen in primates

The findings were published in the journal Animal Cognition.

Dr Paolo Baragli from the University of Pisa in Italy said: ‘Here, we report the first evidence of mirror self-recognition at the group level in a non-primate species.

‘The marks were placed on both cheeks because the panoramic visual field of horses does not cover this head area and, therefore, the mark could be seen by the tested horse only with the guidance of the mirror.

‘Our horses used the mirror surface to guide their movements towards their faces previously marked, thus showing that they are able to recognize themselves in a mirror. They followed a sequence of behavioural steps towards the mirror before being marked.

‘Our horses engaged in contingency behaviours similar to those reported for other species such as head movements, peek-a-boo, and tongue protrusion almost exclusively in presence of the reflective surface’

To start with 14 animals from the Italian Horse Protection Rescue Centre in Tuscany, Italy, were videoed when they encountered a mirror.

All at first thought it was another animal which some tried to play with and others showed aggression towards. Another horse showed fear.

Eleven of the 14 checked behind the mirror as if looking for its counterpart and later moved their heads to see their reflection do the same.

Some stuck their tongues out.

Those 11 had an X dabbed on their faces of gel used for ultrasounds.

They were then recorded and eventually all made attempts to remove the shape which they would not have been able to see if not for the mirror in their stall.

The report reads: ‘The horses tested in our pilot study showed some behavioural patterns in response to the presence of the reflecting surface which were not performed in the other conditions.

So, what other creatures recognise their own reflections?

Bonobos, chimpanzees, orangutans, and gorillas have all passed the mirror test.

In 2001 a pair of bottle nosed dolphins were seen using a mirror to look at marked parts of their sleek bodies.

Scientists have also observed Asian elephants showing a wide array of reactionary behaviours when they see themselves in a mirror and react to markings on their bodies.

The Eurasian magpie was the first non-mammalian species to be known to recognise themselves in a mirror as experiments showed them reacting to marks in their reflections.

The first fish to recognise itself was the cleaner wrasse—a tiny, tropical reef fish.