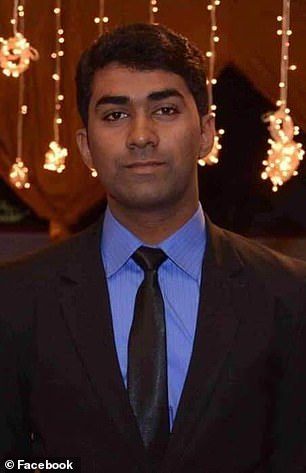 A dashcam may unlock the mystery of how an engineering student died while trying to flee his car after becoming trapped in floodwaters.

Pakistani national Ayaz Younas was on his way to start a new job driving concrete trucks on Wednesday when his Toyota Camry was engulfed in water in Glenorie on Sydney’s northwest outskirts.

Mr Younas had grabbed a dashcam from a flatmate just moments before leaving his home in Whalan at 6am and setting off on his ill-fated journey, with the camera potentially holding vital clues into his baffling death on Cattai Ridge Road.

The road was supposed to be closed but it is possible flood gates were already underwater and Mr Younas may not have noticed the water because it was still dark at the time.

Mr Younas frantically called triple-zero at 6:25am and remained on the line with the operator until 7am when contact was lost.

The 25-year-old’s body was not found until six hours later, with friends demanding to know why it too so long for police to locate Mr Younas’ car.

‘Police said that he was in communication with triple-000 for about 35 minutes when he was stuck. As we are first world country, I don’t know why his location was not traced and nobody reach there in time,’ a friend told Daily Mail Australia.

The inside of Mr Younas’ was badly damaged, indicating to police that he frantically battled to save his life and escape as waters rose around him.

Burhan Mirza, who went to Charles Sturt University with Mr Younas, told Daily Mail Australia the young student was ‘excited’ to start a new life Down Under.

‘He always told me he move to Australia for a better life with dreams of becoming a permanent resident with a good job and a healthy life,’ Mr Mirza said.

‘Ayaz was very kind, always ready to help. He was fond of making friends and [was] great guy.’

Mr Mirza said his friend, who came to Australia two years ago from Karachi, worked at Domino’s Pizza while juggling several other jobs to fund his study of software engineering.

NSW Police Detective Inspector Chris Laird said: ‘Had he not rung us, we never would have found him. Not until the water receded anyway’.

‘But we can only speculate that given what I have seen and the damage to the vehicle that it could very well be that the electrics totally failed, and he was simply unable to escape from the car which is an absolute tragedy.

Mr Younas called Triple-Zero at 6.25am on Wednesday and remained on the line with the operator until about 7am

Emergency crews were called to Cattai Ridge Road, near Hidden Valley Lane in Glenorie at about 6.30am on Wednesday, following reports a car was submerged in floodwaters

‘You can only just imagine somebody fighting for their life to get out of the car — that’s what the inside damage of the vehicle looked like.’

Det Insp Laird said Mr Younas ‘clearly couldn’t get out’ of the car as there were no broken windows.

He said the roads had multiple signs and closure warnings, but the car was located 30m into floodwaters and 6m under water.

Det Insp Laird suggested there would be investigations into why Mr Younas was in the area.

‘The remote location of the area, (we’ll ask) questions about what he was doing up there. He may not have known the area as locals would,’ he said.

There was also a padlocked gate blocking off the road, but it was submerged.

The Pakistani Community of Australia said it had spoken to Mr Younas’ father.

Mr Younas, who has two elder brothers and one younger sister, was from Malir Cantt in Karachi and studied software engineering.

Det Insp Laird said the 25-year-old had strong roots in western Sydney, and that his friends in Australia were devastated by the news.

‘From the police force, all emergency services, here is the very reason why you should not make any attempt to drive through swollen rivers,’ he said.

In Queensland a desperate search for David Hornman, 38, ended when his body was found inside his ute in the Gold Coast Hinterland on Wednesday afternoon

‘The human cost of these floods has been brought into sharp focus in the most tragic of circumstances and I urge communities to continue to be cautious in the face of continued and imminent threats to life,’ Mr Elliott said.

Premier Gladys Berejiklian said there was still extreme danger in flood-hit areas despite the clear weather in Sydney on Wednesday.

‘Whilst the sun is out conditions remain extremely dangerous, rivers are still rising,’ she said.

‘We ask everybody, especially if they are in vehicles to be extra cautious.

‘Some would suggest it is even more dangerous now as rivers continue to rise and catchments fill up with water.’

In Queensland, a desperate search for David Hornman, 38, ended when his body was found inside his ute in the Gold Coast hinterland on Wednesday afternoon.

The 38-year-old father was last seen on Monday and had not contacted his family since heading to a job in the Tamborine area, where torrential rain caused flash flooding this week.

His ute was spotted earlier in the day in the flooded Canungra Creek.

Mr Hornman’s desperate wife had been active on social media, appealing for help from anyone who saw him.

‘He didn’t turn up to work and hasn’t been able to be reached since. His phone is turned off,’ Angela Hornman posted on Facebook on Tuesday.

‘I just have to know he’s ok. Please tell him no matter what I LOVE HIM.’

SES volunteers and NSW Police begin delivering food, medicine and essential items and inspecting properties inundated but floodwaters around Windsor in the north west of Sydney

Meanwhile, residents in one part of the NSW Mid North Coast have been allowed to return home as emergency services warn some of the state’s rivers will remain swollen into the weekend and flooding is still a risk.

The areas of continued concern include Moree in the NSW northwest, the Upper Hunter around Singleton, Grafton, parts of the Central Coast and the Hawkesbury-Nepean catchment northwest of Sydney.

Seventeen flood evacuation orders remain in place affecting people living in low-lying areas of Ulmarra, Brushgrove and on Wednesday night another evacuation order was issued for Cowper on the Clarence River in northern NSW.

Major flooding was occurring at Grafton, Ulmarra and Maclean on Thursday morning.

There is still major flooding along the Hawkesbury River and authorities said it was likely to continue at North Richmond and Windsor until the end of the week.

Helicopters are being used to deliver emergency supplies to isolated communities around the Hawkesbury River.

Almost 24,000 people in NSW have been evacuated and despite the clear weather, about 60,000 people have been told by the SES to be ready to evacuate with major flood warnings still in place for the Macintyre, Gwydir, Clarence and Hawkesbury, Nepean and Colo rivers.

Ten years in the making, an indie film pays tribute to the music of the Smiths

Ten years in the making, an indie film pays tribute to the music of the Smiths