A frantic three-second call to a family member saved a fisherman’s life after his tinnie capsized in rough conditions in Moreton Bay.

The man, 54, spent Saturday night clinging to life on his upended Quintrex 440 Renegade tinnie before he was spotted by a helicopter in waters between Moreton and Mud islands near Brisbane the next morning.

The body of his 48-year-old wife was recovered from the water several hours later after she slipped away from the boat during the night.

Police launched a search for the couple on Saturday night after their family raised the alarm.

The couple had taken a fishing trip to the northern point of Mud Island and were heading home when their boat was overturned by a large wave. 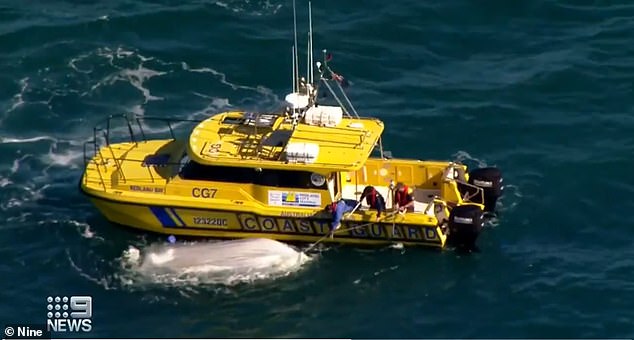 A fisherman spent  4 hours in rough seas clinging to his capsized tinny, pictured being recovered by Coast Guard on Sunday

The man managed to make a three-second call to a family member to alert them  that he and his wife were in trouble before it was cut off.

‘The weather blew up as they were making their way home and took an number of waves over the stern of the boat which started taking them into the water,’ Acting Senior Sergeant Mitch Gray told reporters on Sunday

‘They became close to the Port of Brisbane, they could actually see the rock wall and a large wave has broken over the back and capsized the vessel and they have both gone into the water.’

‘The husband has managed to hold onto the hull throughout the night but at some stage during the night the wife has become tired and fatigued and has become separated from her husband,’ he added. 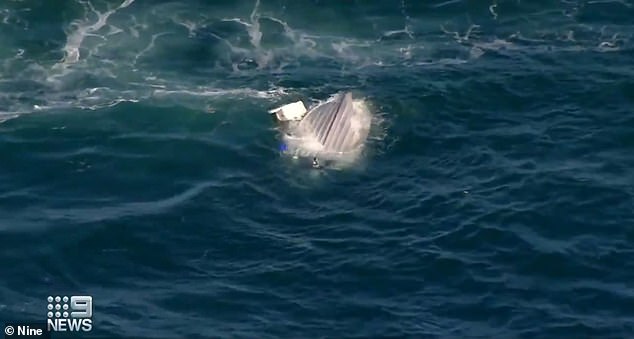 Sadly, the man’s wife slipped off the capsized tinny (pictured) and drifted away on Saturday night. Her body was found the following day

Water police and a police helicopters, along with the Volunteer Marine Rescue and Coast Guard, spent much of Saturday night searching for the tinny in and around the Port of Brisbane, Mud Island, and Redcliffe areas in treacherous conditions.

The man was spotted clinging to the overturned tinnie in waters between between Moreton and Mud islands by a QGAir crew assisting with the aerial search when it resumed early Sunday morning.

He was winched to safety and airlifted to the Princess Alexandra Hospital suffering from hypothermia and has since spoken with police.

Police located a body believed to be the missing woman from the capsized boat on Sunday afternoon. 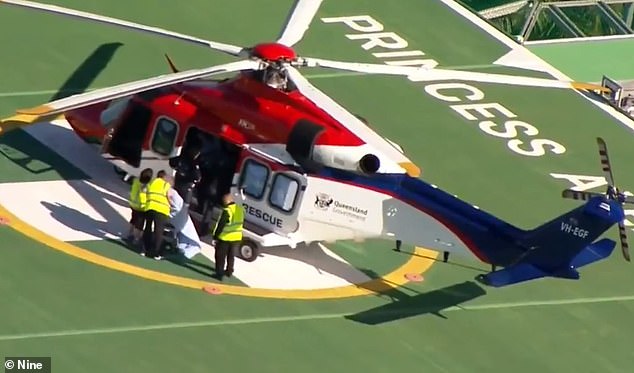