From starring in new Hollywood drama The Nevers to winning an Olivier Award for her performance in a play based on the murder of her uncle by the IRA, it would seem there is nothing Laura Donnelly can’t do.

The 38-year-old, from Belfast, made her on screen debut in 2005 as the love interest in the Channel 4 teen drama Sugar Rush, engaging in a sexy onscreen romp with main character Beth, played by Olivia Hallinan.

She has since appeared in some of Britain’s biggest hit shows, including The Fall, opposite Jamie Dornan, and Outlander, in which she plays Jenny Fraser.

Meanwhile the actress has also carved out a hugely successful stage career, appearing in The River, where she shared an on-stage kiss with Hugh Jackman and met her now-husband Jez Butterworth.

Jez went on to write critically-acclaimed play The Ferryman based on the murder of her uncle Eugene Simons by the IRA, with Laura winning a Olivier award for Best Actress for her performance.

Now she is set to play Amalia True in the new HBO drama The Nevers, which concerns a group of women ‘who find themselves with unusual abilities, relentless enemies and a mission that might change the world.’ 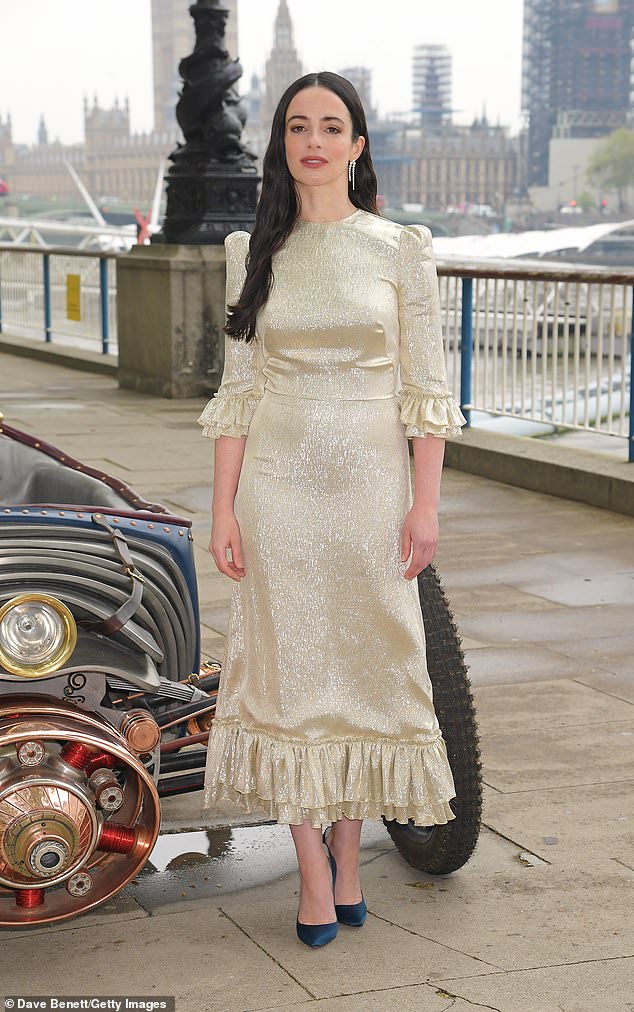 From starring in new Hollywood drama The Nevers to winning an Olivier Award for her role on stage in a play based on the murder of her uncle by the IRA, it would seem there is nothing Laura Donnelly, 38, from Belfast, can’t do 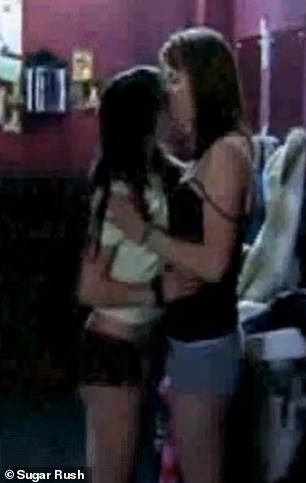 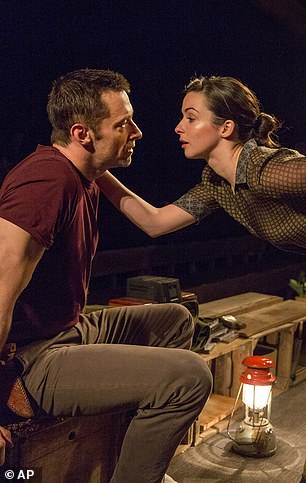 She caught her big break in 2005, with her on screen debut as the love interest in the Channel 4 teen drama Sugar Rush, engaging in a sexy onscreen romp with main character Beth, played by Olivia Hallinan (left). She has gone on to carve a successful stage career (right, in The River with Hugh Jackman)

Despite starring in some of Britain’s biggest hit-shows, Laura has tended to keep tight-lipped about her private life, and rarely shares snaps of friends, family, or partners online.

Born in Belfast in August 1982, Laura has previously said she ‘didn’t come from a creative family.’

Speaking to Interview magazine in 2015, she revealed: ‘I think my mum would have loved to have gotten into something, probably dance, but she came from a very, very small town in rural Ireland right in the heart of the Troubles and really didn’t have those kinds of opportunities.’

She continued: ‘She had moved to Belfast at about 16 or 17 to be a nurse and my dad was a doctor and that’s how they met. 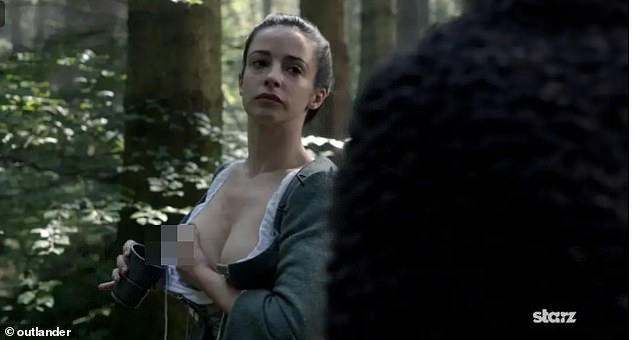 She has since appeared in some of Britain’s biggest hit shows, including The Fall, opposite Jamie Dornan, and Outlander, in which she plays Jenny Fraser (pictured, pumping breast milk on screen) 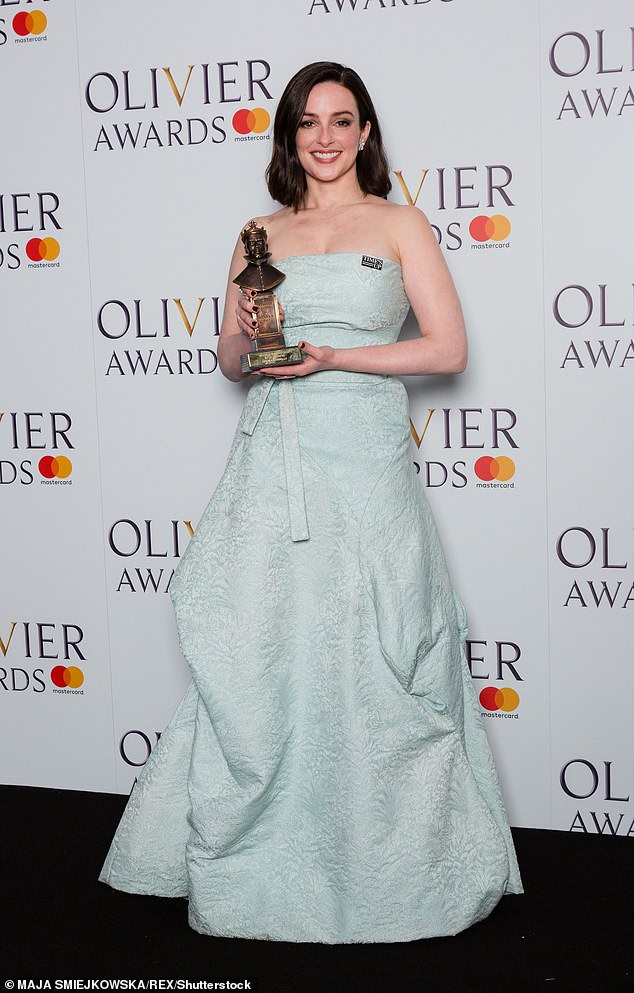 Her partner Jez Butterworth wrote the critically-acclaimed play The Ferryman based on the murder of her uncle Eugene Simons by the IRA, with Laura winning a Olivier award for her role

‘She’s got a creative spirit and that’s definitely where I get it from.’

Remembering growing up in Belfast, she said her childhood was peaceful but conflict came every day. 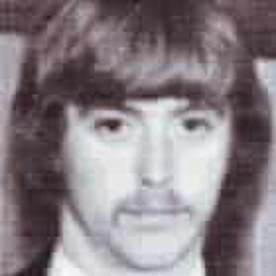 A father-of-three and Laura’s mother’s brother Eugene Simons, 26, went missing from his home near Castlewellan, County Down on New Year’s Day in 1981

Beginning in the late 1960s, the Troubles are generally thought to have ended with 1998’s Good Friday Agreement.

The conflict was a political one with the main issue being the status of Northern Ireland and whether it should remain within the United Kingdom or join the Republic of Ireland.

But the Troubles also had a sectarian aspect as the Irish Republicans were mostly Catholic and the Unionists mostly Ulster Protestants.

More than 3,500 people were killed in three decades of violence.

As a child, Laura was told her uncle Eugene Simons had died in a car crash.

However, as she grew older, she learned more about the story.

A father-of-three and Laura’s mother’s brother Eugene, 26, went missing from his home near Castlewellan, County Down on New Year’s Day in 1981.

His body was found in May 1984 by a dog walker near Dundalk, County Louth.

He had been taken away by the IRA, shot dead and dumped in a bog.

He was among the IRA policy of ‘The Disappeared’ – men and women in Northern Ireland suspected of being informers of the British who were taken from the streets, questioned, shot and buried.

Eugene is believed to have been an IRA member who had betrayed the whereabouts of bomb-making material.

Following the Good Friday Agreement, the IRA admitted in 1999 that it murdered and hid the bodies of nine of the 16 Disappeared.

The Independent Commission for the Location of Victims’ Remains leads the search for the bodies.

In 2012, Laura learned the full truth after she and then-partner Jez were watching a documentary called The Disappeared.

She was shocked when her uncle was named as one of them.

She mentioned this to Jez, who was so inspired by the story he wanted to write a play about the experience of the family.

He asked permission from Laura’s mother, with the couple telling Broadway.com: ‘It has been emotional to be able to turn something very tragic around into something really joyous—particularly for my mother.’

Set during The Troubles, The Ferryman tells the story of the family of a former IRA activist, living in their farmhouse in rural County Armagh, Northern Ireland in 1981.

After premiering in 2017, with Laura a member of the original cast, the play won multiple awards and critical acclaim.

Speaking to the New York Times, she explained: ‘Friends of mine had much more extreme experiences.

‘Friends of mine were dragged out of their beds in the middle of the night by the army.’

Laura has described how her father’s position as a physician who crossed between both Protestant and Catholic communities lent him a level of protection.

Laura was a natural performer as a child and it was her interest and passion for Irish dancing, which led her to see life on stage as a career.

She revealed: ‘I was on stages and theaters in Northern Ireland playing the kids’ parts in those.

‘It was never speaking, but it was this form of dance that told those stories, so I got a lot of experience of just being on stage and that’s absolutely where the theater bug bit.’

Having spent time in Scotland on holidays with her family, and thinking she would spend the entirety of her career in London, Laura applied to just one drama school; the Royal Scottish Academy of Music and Drama, in Glasgow.

She graduated in 2004 and almost immediately landed her first big role in the Channel 4 teenage drama Sugar Rush.

The programme, which lasted two series, centred on the life of a 15-year-old lesbian Kim Daniels, who had just moved from London to Brighton.

Laura played Kim’s first love interest, Beth, who meets the main character at a church meeting for people who are gay, before the two embark on a sexy fling.

She previously revealed she was ‘nervous’ about her appearance in the series, telling Phoenix magazine: ‘For girls, and boys, it must have been such a breath of fresh air. I was aware of that and was really proud.’

Meanwhile, that same year, Laura began carving out her career in British TV and appeared in some of the nation’s most beloved soaps – including Holby City and The Bill.

In 2009, she starred in Best: His Mother’s Son, the BBC drama on the life of George Best, playing Best’s sister Barbara.

But it wasn’t till 2012 she had her first big break, appearing in The Missing opposite Ashley Judd, followed by another big role in The Fall, with Jamie Dornan.

Meanwhile she also spent time carving out a successful theatre career, starring in her now husband Jez Butterworth’s play, The River at the Royal Court Theatre, alongside Dominic West and Miranda Raison.

In 2014, she landed her biggest role yet in the form of Jenny Fraser in Outlander, a series which she starred in for three years.

Much of the action takes place in her on-screen husband’s ancestral home, Lallybroch, and she was christened ‘Jenny from the Broch’ by fans online.

The series reunited her with a university friend, Sam Heughan, who plays her character’s brother in the series.

Despite her success, at the time she said she found the ‘unpredictability of work difficult’, telling the Independent: ‘I’ve been busy with work, thank God, but you still never know where the next gig is coming from and if you’re not careful you can fret over things.

‘It can be struggle to make time for some things that are really important, like people, like family, but you have to develop the knack of just letting go and trying not to be in control all the time because if you wanted your life to be predictable you shouldn’t have gotten into acting in the first place.’

Around the same time, Jez and Laura watched a documentary called The Disappeared, about the victims of a particularly cruel campaign by the I.R.A.: secret murders of supposed traitors.

Laura was stunned to see her uncle Eugene Simons was featured in the programme.

He had vanished on New Year’s Day 1981 and later found murdered by the IRA, his body hidden in a bog. 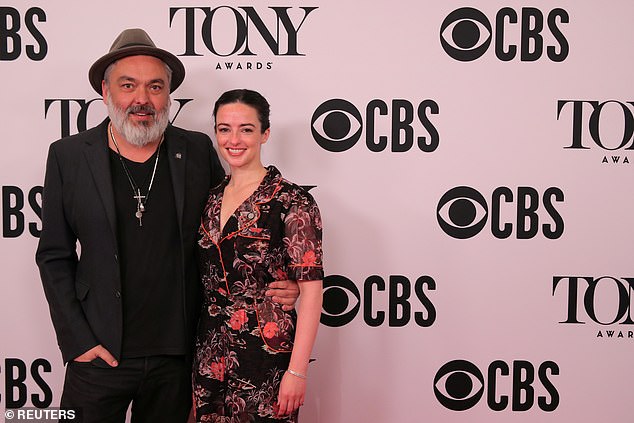 After asking Laura’s permission to retell the deeply personal story of her uncle Eugene and his murder, Jez wrote The Ferryman, in 2017, a play based on the family’s experience  (pictured together in 2019) 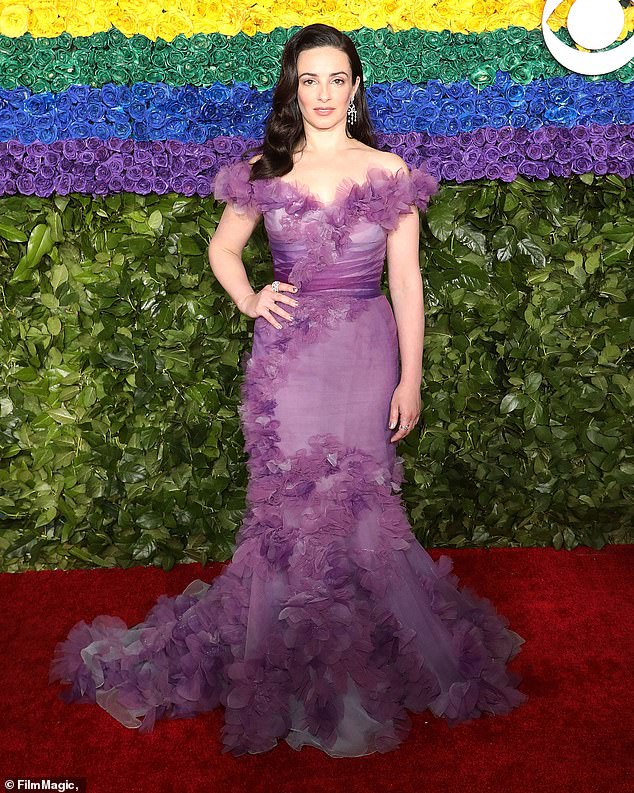 After premiering in 2017, with Laura a member of the original cast, The Ferryman won multiple awards and critical acclaim (pictured Laura at the Tony Awards in 2019)

After asking her permission to retell the story, Jez wrote The Ferryman in 2017, a play based on Eugene and the family’s experience.

It was during the same period that Laura learnt she was pregnant with their first child.

The role was adapted to include her pregnancy, and she later reprised her role in the Broadway production alongside Hugh Jackman while pregnant with their second child.

In 2017, she played the deeply personal role in London once again, winning a Laurence Olivier Award for Best Actress for the performance and a Tony Award nomination. 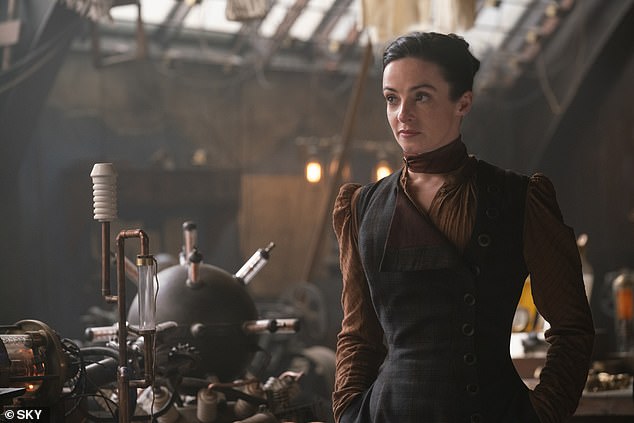 Now she is set to play Amalia True in the new HBO drama The Nevers, which concerns a group of women ‘who find themselves with unusual abilities, relentless enemies and a mission that might change the world

The family now live in London, with Laura juggling mothering their two daughters with her blossoming career.

Earlier this year, it was announced she had been cast in The Nevers.

The Irish actress will play the role of Amalia True on the sci-fi series, which is set in the Victorian era.

The Nevers is set in England in the 1890s, and centres on a group of people who have mysteriously been imbued with distinct superpowers. Some can see the future, some grow 10-foot-tall, others can harness electricity. 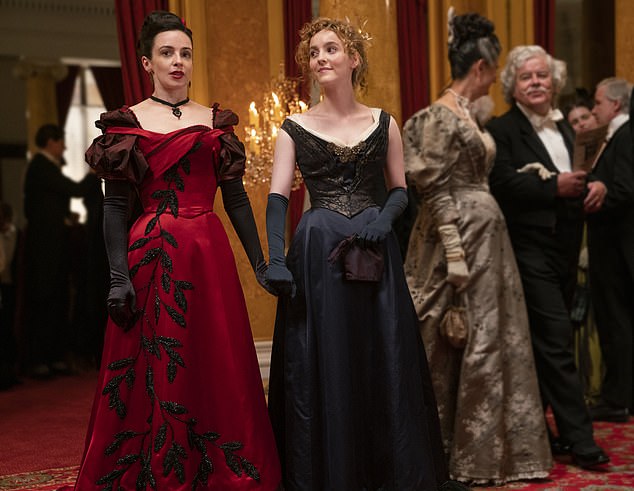 The Nevers is set in England in the 1890s, and centres on a group of people who have mysteriously been imbued with distinct superpowers. Some can see the future, some grow 10-foot-tall, others can harness electricity

Whedon said in a statement that the Belfast native ‘has charisma, wisdom and an anarchic precision that not only captures Amalia, but defines her.’

The Oscar-nominated screenwriter/producer added: ‘She’s fierce and she’s funny – and I need both for the journey ahead.’

HBO, which has delved into the sci-fi genre with Westworld, emerged with rights to the show after a competitive bid last year, according to the outlet.

Show creator Whedon, responsible for Buffy the Vampire Slayer, Angel and Firefly on the small screen and who directed the first two Marvel Avengers movies, has since left the series and been accused by actors on other projects of being abusive.