Bayern Munich are back in Champions League action less than 60 days after conquering PSG in last season’s final – and Hansi Flick’s men are aiming to become only the second team in the competition’s history to retain their European crown.

A lot has happened since that unprecedented final in Lisbon, which saw the biggest game in club football staged behind closed doors due to the coronavirus pandemic.

While spectators are starting to filter back in across Europe, Bayern boss Flick will be hoping for more of the same on the pitch when they kick off their title defence against Atletico Madrid on Wednesday evening. 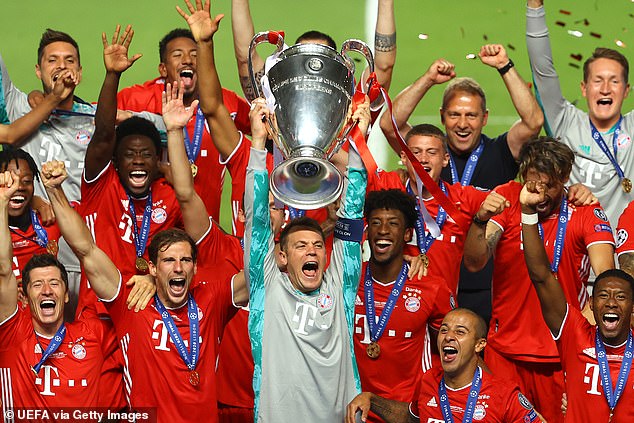 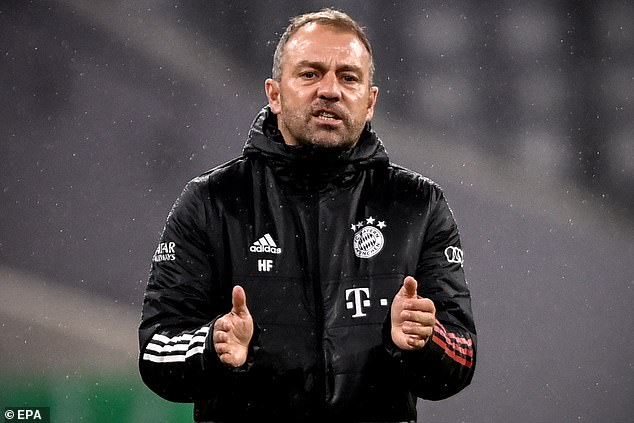 Diego Simeone’s men will be well aware of the threat the German giants pose, after they humiliated Barcelona 8-2 on the way to the final in August.

Bayern’s triumph capped off a remarkable transformation under Flick, who took over from the sacked Niko Kovac before Christmas last year before going on to secure a memorable treble in dominant fashion.

However, while they may have already wrapped up two more pieces of silverware since the start of this season, their campaign hasn’t been as smooth as many predicted.

So what’s been going on? Who’s arrived and who’s departed and what can Atletico expect going into the game?

Here, Sportsmail gives you a lowdown on the Champions League winners ahead of their European season-opener in Munich.

After having a reduced pre-season as a result of their European success, Flick had just 26 days from the final in Lisbon until the start of the Bundesliga campaign.

And the German giants picked up where they left off as they completely destroyed fierce rivals Schalke 8-0 on the opening day of the season.

A hat-trick for Serge Gnabry and debut goal for Leroy Sane rounded off a superb team performance, with the result spelling more dread for their Bundesliga rivals.

However, nine days later, Bayern went on to suffer a shocking 4-1 defeat away to Hoffenheim, leaving the reigning champions stunned after dominating 72 per cent of possession at the Rhein-Neckar Arena. 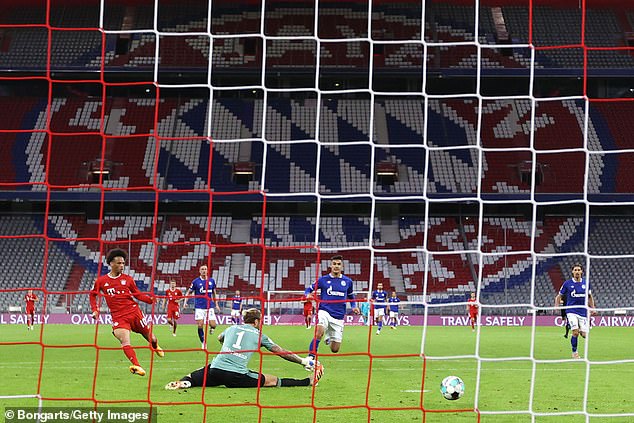 While Bayern have since recovered from the Hoffenheim defeat, the fact that they’ve been leaking goals still remains an ever-present problem for Flick.

A week after shipping four goals, Bayern went on to concede three more against Hertha Berlin and then another goal against the newly-promoted Arminia Bielefeld after the international break.

It means that Bayern have conceded a staggering eight goals in their opening four games – a quarter of the amount of goals they concede during the whole of last season’s Bundesliga campaign.

Luis Suarez, Joao Felix and Diego Costa will be licking their lips when they arrive at the Allianz Arena on Wednesday night but Simeone will also be fretting about Bayern’s firepower up front. 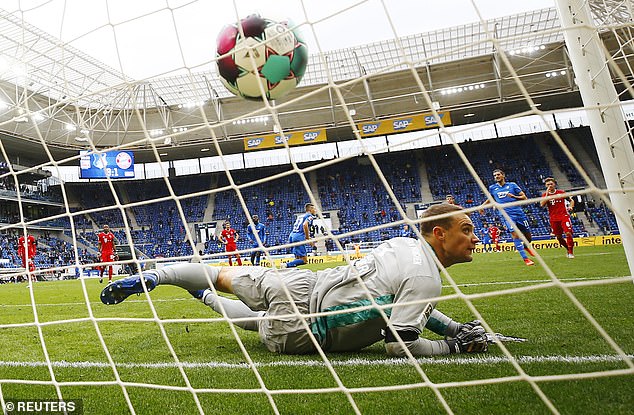 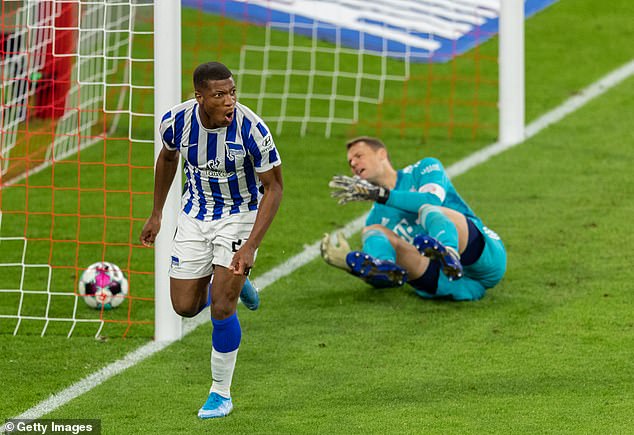 Despite conceding goals at a rapid rate, Bayern have been firing on all cylinders at the opposite end and have racked up 17 league goals already this season.

Robert Lewandowski already has seven goals to his name in the Bundesliga while Sane and Gnabry make up a frightening front three for the Bavarian side.

Against Simeone’s defensively sound team, it will very much be a case of an  unstoppable force meeting the immovable object.

While Bayern fans will be concerned with their side’s leaky defence, they will be delighted to have added two more pieces of silverware to their already-stacked trophy cabinet.

Following their triumph in the Champions League, Bayern went on to meet Europa League winners Sevilla in the UEFA Super Cup at the Puskas Arena in Hungary last month.

After going 1-0 down to a 13th-minute Lucas Ocampos penalty, Bayern equalised soon after to force the game into extra time. 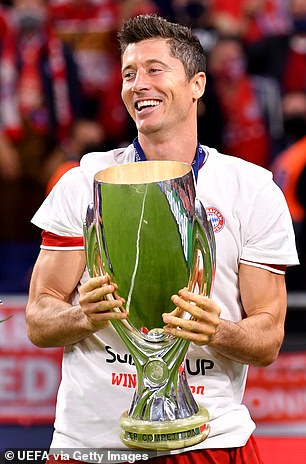 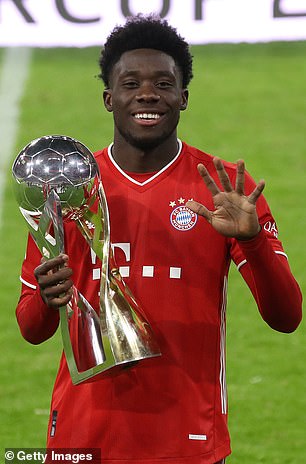 Seconds before the interval in extra time, veteran Javi Martinez headed in the winner to continue the club’s hot streak in European competitions.

Six days later, they were in another final and it was another final win for Flick and his men as they beat old foes Borussia Dortmund 3-2 in the German Super Cup, with Joshua Kimmich scoring an unorthodox winner late on.

After their treble success last season, Bayern fans will be dreaming of going one better this season – and they’re already well on their way.

Has Alphonso Davies lost his spark?

After playing a starring role in Bayern’s treble-winning campaign, Alphonso Davies is now destined for greatness after establishing himself as one of the world’s best left backs.

The Canadian teenager earned a spot on the shortlist for Tuttosport’s Golden Boy award as he terrorised defences throughout Germany and Europe.

However, the 19-year-old appears to be suffering a hangover from his sensational breakout season and is now struggling to nail down his spot in the starting XI this season. 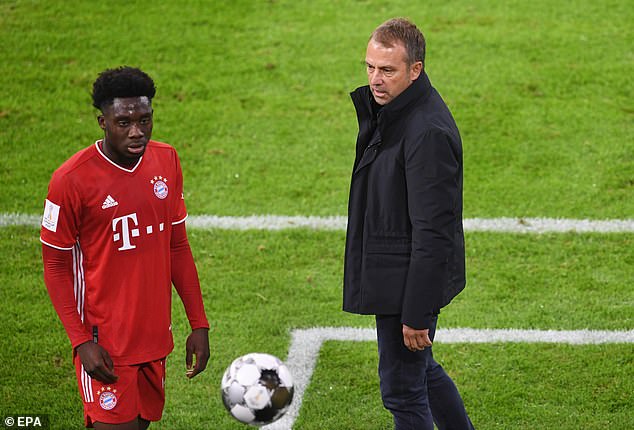 Bayern boss Flick opted to start Lucas Hernandez at left-back over him in Saturday’s 4-1 win over Arminia and is now facing a fight to win his place back.

‘Alphonso’s form dropped a bit,’ Flick said in his Tuesday press conference. ‘But he gets all our support. We benefit from his pace, his energy.

‘It’s important he gets back on track. It’s a bit normal to see a young player go through such a spell following an incredible season. We will support and help him.’

It was a busy window for Bayern who have been known to drive a hard bargain in the transfer market.

After a long tussle with Manchester City, the Bundesliga champions finally got a move for Sane over the line, with the winger completing a £55million switch in July.

However, while a move for Sane was conducted in the opening few days of the window, Bayern left it until 48 hours before the deadline to bring in four more men.

The arrivals of Bouna Sarr, Marc Roca and Eric Maxim Choupo-Moting were capped off by Douglas Costa’s return to the club on loan from Juventus. 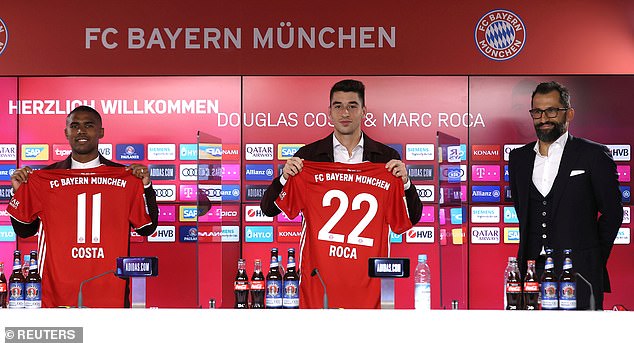 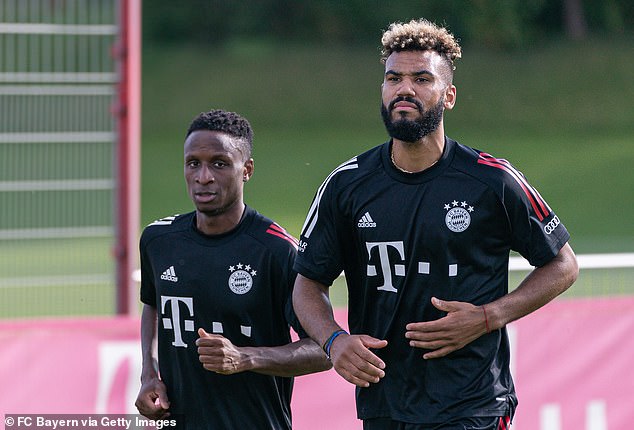 The Brazilian enjoyed two years at the Allianz from 2015 to 2017 before making his loan move to Turin in 2017 a permanent one a year later.

Flick has added plenty of depth to an already stacked squad but it remains to be seen what impact Thiago’s departure to Liverpool will have.

The Spaniard played an integral role in Bayern’s success last season as he pulled the strings from midfield and has now left the playmaking duties in the capable hands of Kimmich and Leon Goretzka.

It was announced earlier this week that Serge Gnabry had contracted the coronavirus, seeing him ruled out of the Atletico clash on Wednesday.

However, the club are now fearing that he may have infected others after he was pictured in training with a number of team-mates just hours before he tested positive for COVID-19.

As reported by Bild, Gnabry was pictured completing a contact stretching exercise with defender David Alaba as well as running alongside and competing against other members of the squad. 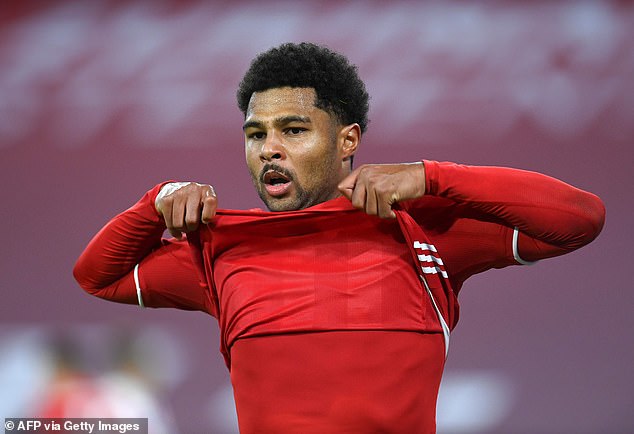 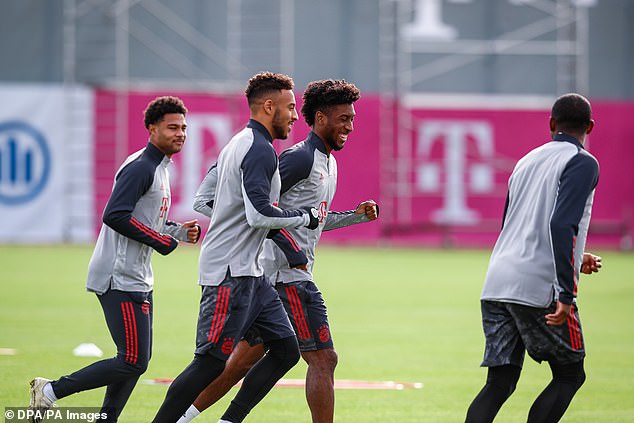 The report goes on to claim that 25 players took part in training but the strict hygiene rules mean the club are optimistic the game with Atletico will not be under threat.

UEFA rules state matches will be played if each team has at least 13 professionals (including at least one goalkeeper) available.

Bayern reportedly now want to test players even more closely, with each squad member to be tested before boarding the team bus on Wednesday as they look to get control of the issue.

The Countdown: AOC on Twitch, Lesley Stahl and Obama's inspiration

The Countdown: AOC on Twitch, Lesley Stahl and Obama's inspiration