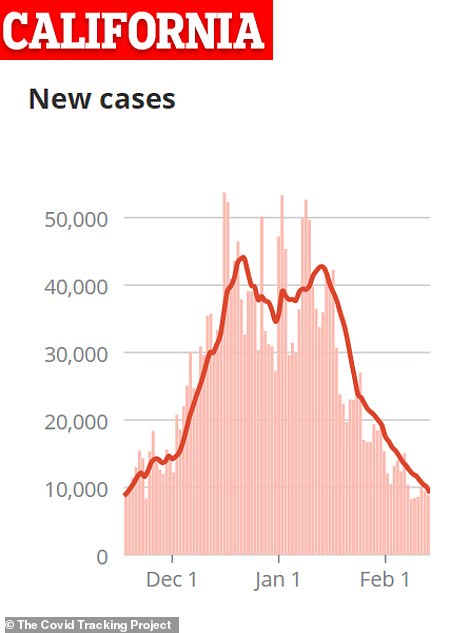 
Since the early days of the coronavirus pandemic in the United States, no two states have been more different in their approaches than California and Florida.

Looser restrictions mean schools have not been shutdown statewide and mask mandates have never been imposed.

In November, he even criticized states like California with harsher restrictions and said he trusted his residents to ‘use common sense’.

‘How has that worked out in the states that have done it?… What about all these states where you have an explosion in cases?’ DeSantis told reporters.

‘At some point, does the observed experience matter? I’m opposed to mandates. Period. I don’t think they work.’

Despite these different approaches, both states ended up with the same outcome. A DailyMail.com analysis shows that, over the course of the last year, the states have each seen cases, deaths and hospitalizations fall by about one-third.

Both California (left) and Florida (right) have been recording anywhere between 10 and 20 deaths per million people over the last two months. Historically, Florida has recorded about 130 cases per 100.000 people and in comparison with 117 deaths per 100,000 in California

When looking at raw numbers, California appears to be doing worse than Florida.

However, population size must be taken into consideration. California has about 40 million residents and Florida has about 22 million.

When adjusted for this metric, the states have very similar cases rates.

According to The COVID Tracking Project, California and Florida are both reporting an average of between 200 cases and 400 cases per million people, and each have been seen declines over the last several days.

Both states followed a similar curve with a spike in cases around January 1 – as the winter surge led to rapidly rising rates of cases and deaths – with infections starting to tail off a few weeks later.

Dr Stuart Ray, a professor of medicine at Johns Hopkins, told DailyMail.com in a previous interview that Americans are currently seeing the effect of their good behavior, which is why curves and rates in states look so similar.

‘What we’re seeing in this epidemic…goes in cycles,’ he said.

‘When people are not careful, the virus infects lots of people, but we’ve seen multiple peaks dampen when people got serious.’

Deaths tells a similar story. Historically, Florida has recorded about 130 cases per 100.000 people and in comparison with 117 deaths per 100,000 in California.

Over the last 90 days, both states have been recording anywhere between 10 and 20 deaths per million people, COVID Tracking Project data shows.

Once more their curves appear similar with fatalities spiking around mid-January, which were a few weeks behind the rise in cases due to deaths being a lagging indicator.

Florida Gov Ron DeSantis as issued very few closures (orange lines) and has been very critical of states like California with harsh restrictions, with both states following similar curves, In fact, even with rising rates, he has chosen to reopen (blue lines) much of his state

Ray said early on in the pandemic, there were relatively asynchronous peaks on the East Coast and West Coast.

‘We didn’t have a coherent message at the federal level so it was a whack-am=-mole approach to control.’

‘What we’re seeing with this is when people are receiving different stimuli messaging rates of infection population stories that gain foo holds…then people get more careful.’

How do the states compare when it comes to COVID-19 hospitalizations?

The COVID Tracking Project, which has been recording hospitalizations in every state, does not have a figure for all hospitalizations ever reported in California while, in Florida, this data was not made publicly available until July.

At its peak on January 7, California reported a single-day total of 22,851 people hospitalized due to the virus while Florida reported 7,762 people on January 14.

When adjusted for 100,000, the states have a similar hospitalization rate.

However, The Tampa Bay Times notes that Florida’s rate has been historically higher until recently.

Worth noting when it comes to hospitalizations is age.

More than one-fifth, or 21 percent, of Florida’s population is at least 65 years old with at least 4.6 million out of the state’s 22 million identifying as senior citizens.

Comparatively, just 15 percent of California’s population is elderly with six million out of 40 million aged 65 and up.

This means more residents in Florida are susceptible to a virus that preys on the elderly.

Overall, the two states are quite similar despite their different approaches with California having higher total numbers but Florida having a higher rate of cases and deaths when accounting for population, with both states now trending downward.

10 things you need to plan the perfect micro-wedding