How is the judicial process against Juan Orlando Hernández proceeding in the US? 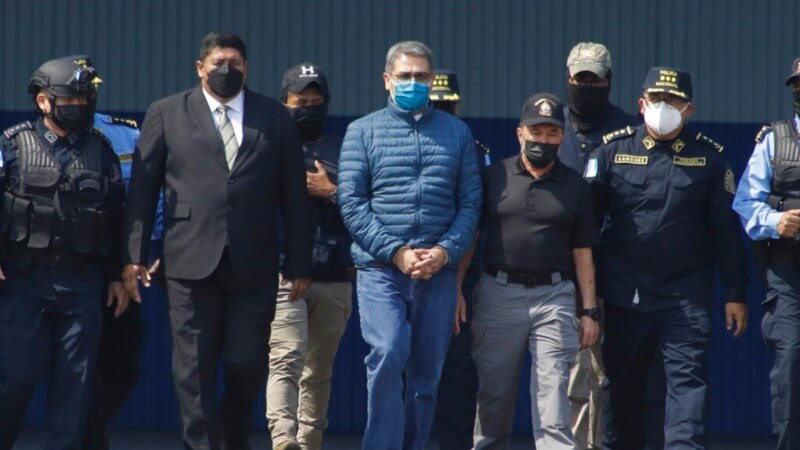 The former president of Honduras Juan Orlando Hernández arrived in New York on Thursday night, where he will answer for alleged drug trafficking crimespossession and carrying of weapons and other charges imputed to him by federal prosecutors from the United States Department of Justice.

But, how is the process going, what stages can we expect in the accusation, and what could the defense raise in charge of the legal office of the criminal lawyers Raymond Colón and Daniel Pérez in New York.

In a statement issued on Wednesday night, prior to the transfer of Juan Orlando Hernández, the family made a public statement and offered some announcements about the case.

“We reiterate to the national and international community the innocence of Juan Orlando Hernández, a victim of the revenge of drug traffickers who he himself extradited or who forced him to flee to the United States to seek agreements with the US prosecutor’s office to reduce his sentences in exchange for, and based on lies, accusing the former president of committing acts at odds with the law of that country, lies that will be dispelled by the defense team,” the statement said.

Experts on the matter have said that if found guilty, he could face up to 40 years in federal prison in the United States, but everything indicates that the former president – who governed Honduras between 2014 and 2022 – will plead not guilty to all charges.

Honduran criminal lawyer Marlon Duarte, who has worked in extradition of Honduransand also joined the team of one of the more than 30 cases of Hondurans indicted in federal courts in the United States speaks with the voice of america and explains some key points of the process.

What is the first step after the arrival of Juan Orlando Hernández in the US?

The lawyer Duarte explains that given the current protocols for COVID-19 upon arrival and being registered in a detention center in New York, they will spend at least three days while tests are carried out, until he is brought before the judge of the Court of the Southern District of New York York next week to officially present the charges.

But before boarding the plane, the process required that the First Instance Extradition Judge, Edwin Ortez, assigned by the Supreme Court of Justice of Honduras to follow the extradition request, hand him over to the Drug Control Administration ( DEA) at the door of the plane where prosecutors read him his rights as extradited.

Lawyer Félix Ávila, head of the former president’s defense in Honduras, told the VOA that for this stage of the process his law firm no longer has participation because “it is a process of the Honduran Police and the DEA.”

The penalist Marlon Duarte says that “once he arrives and they register him inside the penal center (…) that for pandemic reasons I think they are using three days until they do an exam on him to rule out that he has covid, then he will brought before the judge and the first question the judge asks is whether he pleads guilty or not, logically we know that the majority pleads innocent by virtue of the fact that I have not had the opportunity to reach some kind of agreement with the prosecutors”, he says lawyer.

At what times in the calendar is the criminal process aired?

After the hearing for the presentation of charges before the federal judge, the prosecutors and the defense in common agreement attend a second hearing that could be held two or three months later to outline the evidence that is contemplated, while the defense has the opportunity to counter some procedural arguments.

Also, the calendar times in court depend on the type of negotiations that are opening up along the way between the defense and the accusers with shared requests “that allow them to separate some situations that they are accused of and that the accused party can demonstrate that certain things are not they are like that”, in cases of extraditable Hondurans there have been negotiations that have lasted up to two years.

“We trust in the North American justice and that when we are given the opportunity to counteract false statements by drug traffickers with tangible evidence, we will be able to demonstrate how Juan Orlando, at the head of the Honduran government, confronted criminal gangs and fought organized crime in all its forms” , said the family of the former president in the statement prior to his extradition on Thursday.

How have the powers of state in Honduras acted to extradite JOH?

Since the announcement of the extradition request made by the United States Department of Justice through the Honduran Foreign Ministry was published on February 14, the Honduran establishment acted quickly on the request.

Upon learning of the order, the Central American country’s Security Secretariat set up an operation with some 500 troops around Juan Orlando Hernández’s home in Tegucigalpa and other properties to proceed with the request for the Extradition Agreement signed between Honduras and the United States. in 1909.

The Supreme Court of Justice (CSJ) streamlined the process and assigned to Judge Edwin Ortez to take the case, the one that found elements to keep him in prison and scheduled the evidence presentation hearing held on March 16, where he gave the green light to extradition.

During the first stage, the Honduran executive led byPresident Xiomara Castro de Zelaya He did not make any pronouncement, since the process was in the hands of the justice system, which on March 28 in a full court of the CSJ ratified the ex-president’s extradition ruling.

However, on Wednesday, the House of Government, as part of the process of coordinating the delivery of the accused, issued a public statement on the process against a citizen of his country in the United States justice system.

“The State of Honduras, in response to the Extradition Agreement that exists with the United States of America and following the legal norm issued by the Supreme Court of Justice through the Natural Judge, will proceed to execute the extradition order of the citizen Juan Orlando Hernández Alvarado” explains the text.

Criminal lawyer Marlon Duarte says that in this process the ruling classes in the Central American country “have acted with the greatest speed, because no extradition case, in defense of the court, has used more speed than in this case.” Duarte opined.

Is granting extradition equivalent to guilt?

Everything responds to the bilateral agreement of the process and that the case “meets the requirements of the Agreed Order of an administrative request by the United States government,” says Duarte.

Therefore, he reiterates that the former president is protected by the principle of innocence because the fact that the United States’ request has been granted “does not imply that a person is guilty (…) and declare him already with a sentence, it is simply that he meets the requirements for extradition,” Duarte pointed out.

The voice of america He wrote to the law firm that will represent former President Juan Orlando Hernández in the United States to inquire about the procedure of the case, until the closing time of this article, no response has been received.

Russia announces the second phase of the military operation .. A high-ranking US delegation in Kiev and Moscow accuses US agencies of besieging its embassy | Politics news

Russia announces the second phase of the military operation .. A high-ranking US delegation in Kiev and Moscow accuses US agencies of besieging its embassy | Politics news