However, with awards season now well underway in Hollywood – finally in person after a two-year hiatus caused by the pandemic – the Northern Irish youngster, who turned 11 last summer, is quietly stealing the show in Hollywood – with a slew of LA talent agencies having battled to represent him.

On Monday night, at the 5th annual Hollywood Critics Association Awards at Los Angeles’ swish Avalon nightclub, a confident-looking Jude donned a characterful royal blue suit, with matching polka dot dickie bow, and smart brogues, and looked every inch the rising star as he took to the stage to accept his first major individual award.

Scooping Best Newcomer Award for the role of Buddy in the black-and-white film, which documents life growing up in a working class family during the Troubles in the late 1960s, the rising star was swiftly congratulated by A-listers Jamie Dornan and Caitriona Balfe, who play his parents in the film. 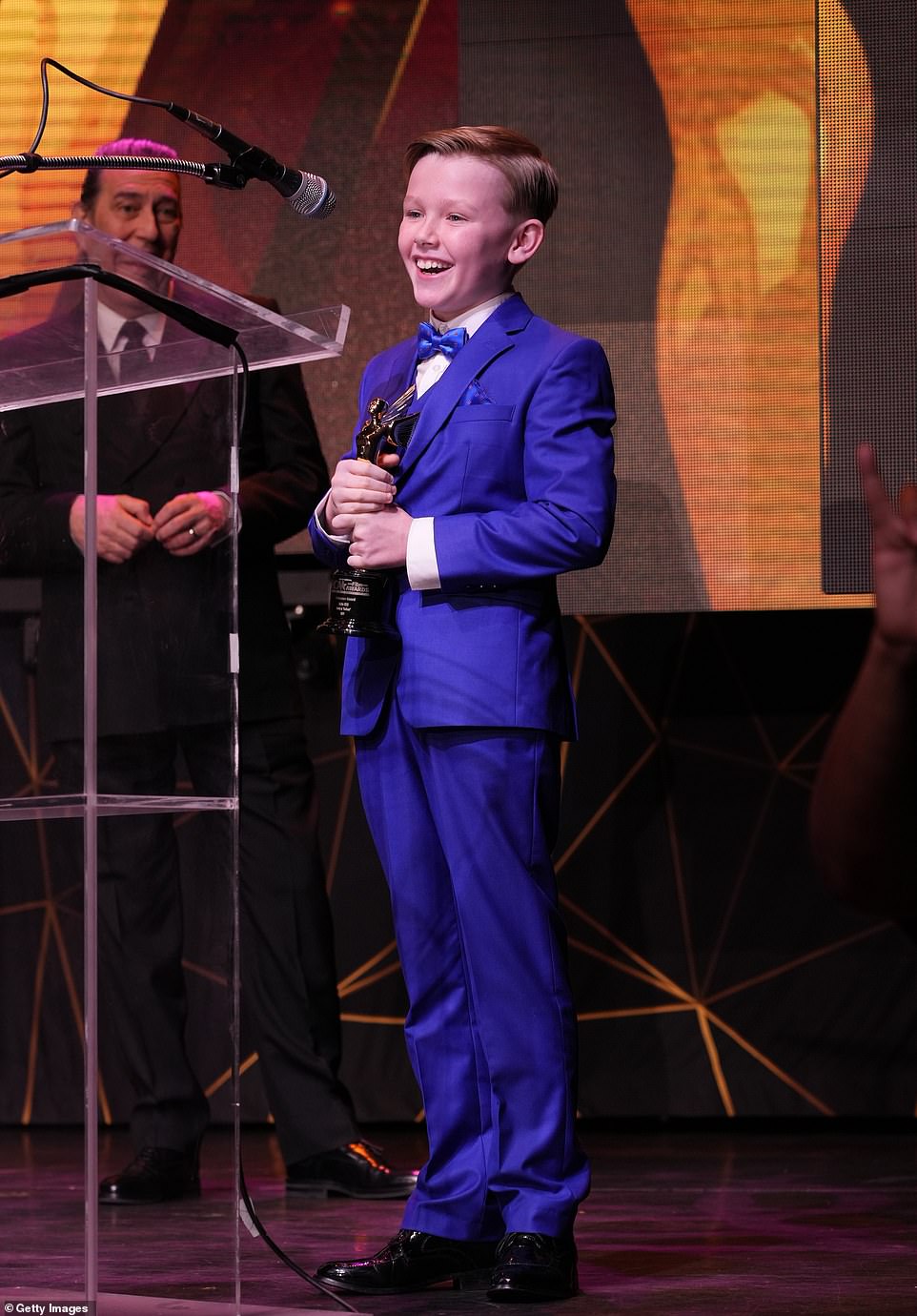 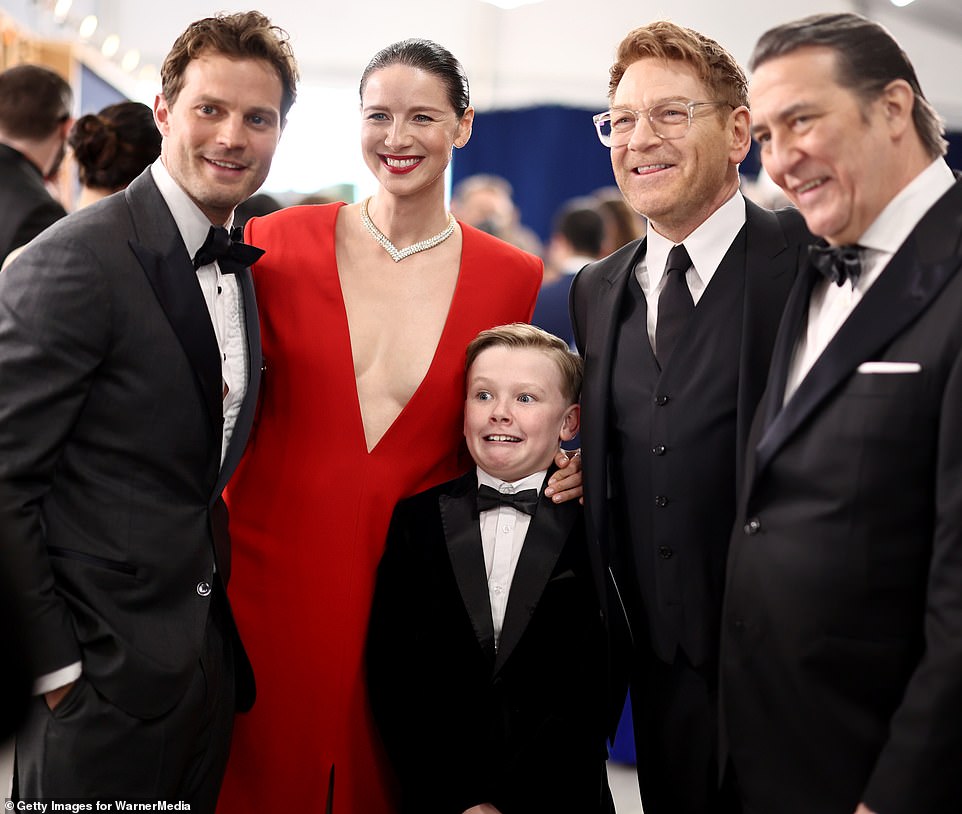 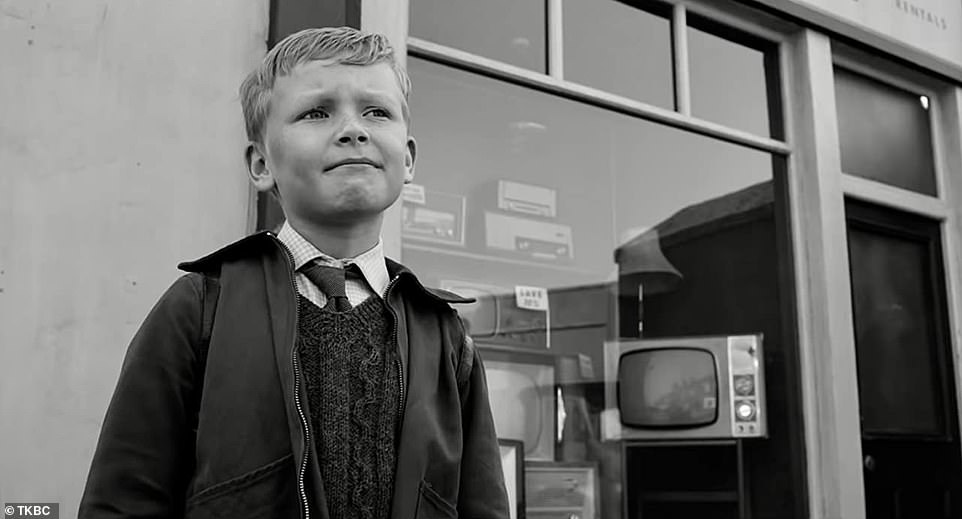 Hill, who grew up in a village 25 miles from Belfast, has been hailed as ‘a natural’ by actor Sir Kenneth Branagh, with Dame Judi Dench saying the star was ‘like an actor who had had 25 years’ experience’ 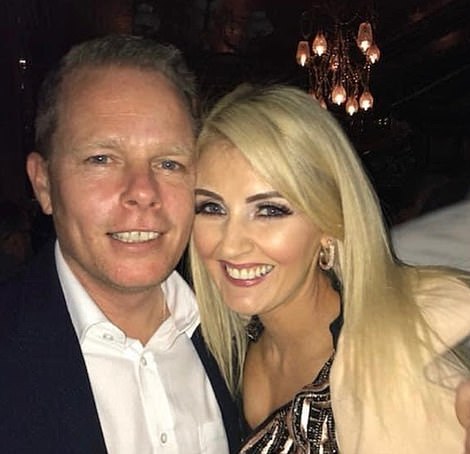 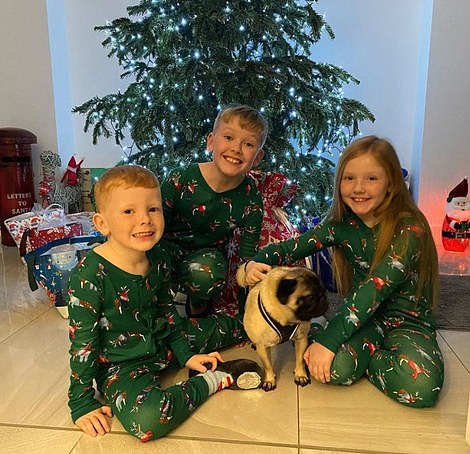 Family affair: Hill’s parents, Darryl and Shauneen, are currently chaperoning their young son during his trip to California; the actor has a sister, Georgia, who also acts, and a younger brother, Jonah who is signed to the same drama school

Critics have garlanded the film with praise – in his five-star review, the Daily Mail’s critic Brian Viner called it a small masterpiece – and the awards season looks set to back that up.

Mingling with his co-stars on the red carpet – including Sir Kenneth Branagh – and meeting his heroes, he told reporters that he was lost for words after chatting to Spider-Man: No Way Home star Andrew Garfield.

The blonde-haired boy from the village of Gilford, about 25 miles south-east of Belfast, looked every inch a match for his peers but just a few years ago, he was watching Spider-Man on TV with the rest of the world.

His stratospheric rise to fame, after beating 300 hopefuls to play the part, has seen him win wide praise for his stellar performance – and several awards, although he missed out on a predicted Oscar nomination.

Hill has now been signed by Hollywood acting agencies UTA and Berwick & Kovacik and further roles are surely just a matter of time – but his parents maintain that he’s just ‘a normal boy’, who they’re keen to protect from the glaring spotlight of Hollywood. 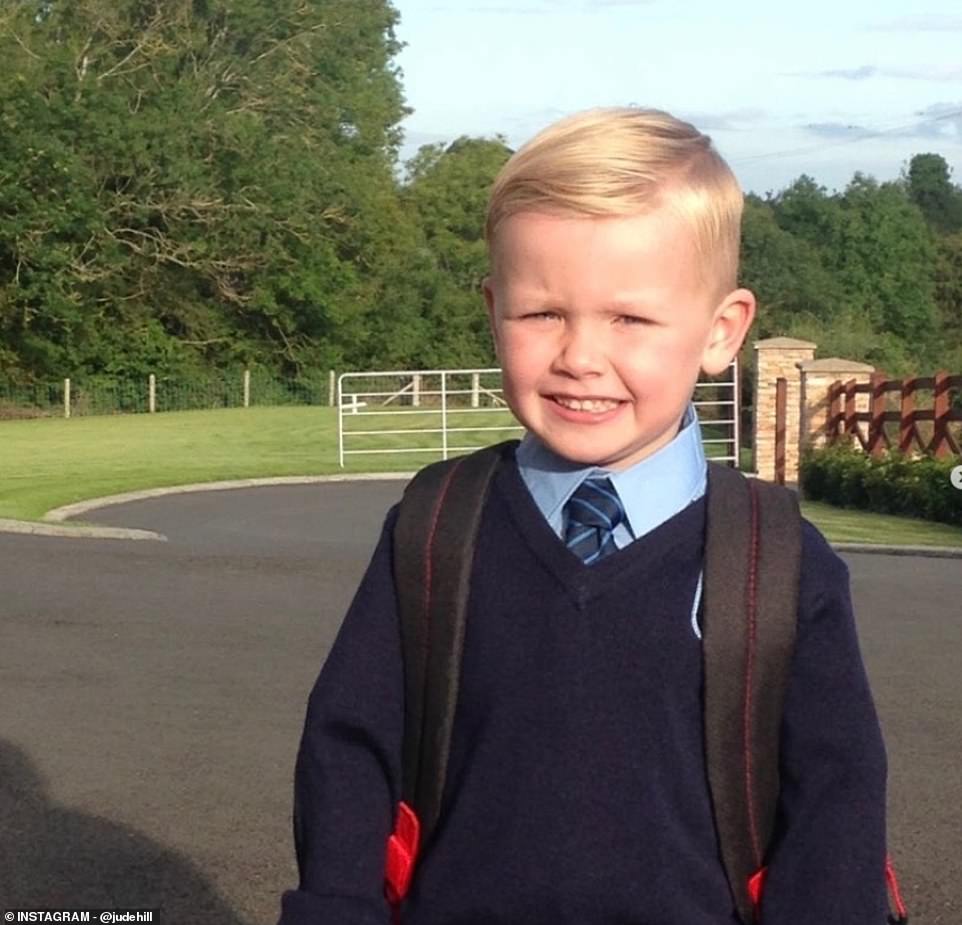 Potential: Hill in a photo posted on his Instagram  account showing him during his final year at primary school 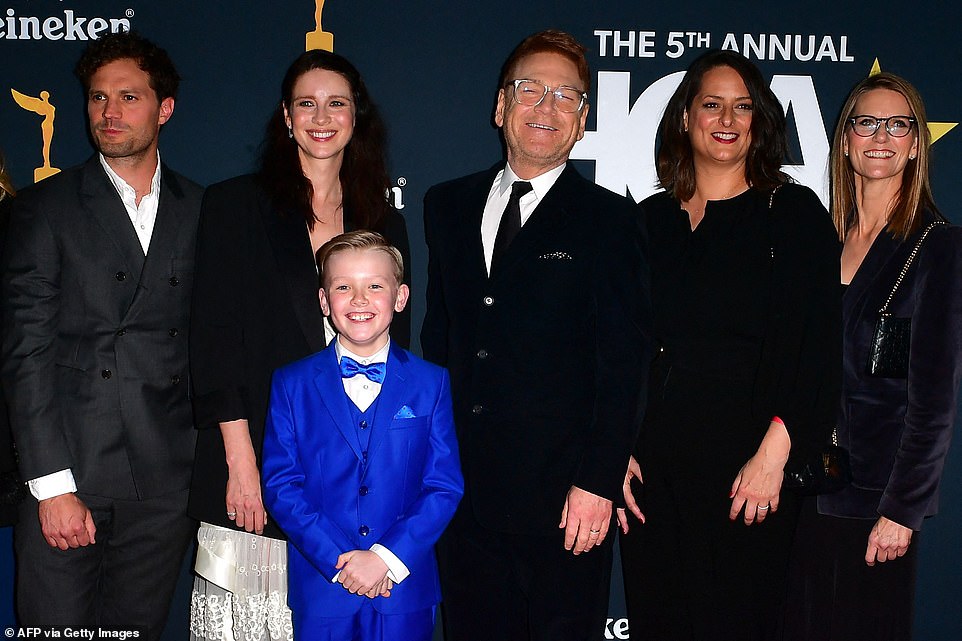 Wearing a characterful royal blue suit, with matching polka dot dickie bow, and smart brogues, the 11-year-old has looked entirely at ease with his glitzy co-stars while doing the rounds in Hollywood

Now 11, the young actor has been hailed as ‘a natural’ by Sir Kenneth, while co-star Dame Judi Dench said he was ‘completely like an actor who had had 25 years’ worth of experience’.

For the Hill family, the bright lights of Hollywood are a far cry from the rural village where they live. Dad Darryl is an Operations Manager at Concentrix, while mum Shauneen has given up work to focus on the acting aspirations of her both Jude and daughter Georgia.

Adorable photos on Jude’s Instagram page – glitzier in recent weeks – show the family enjoying family holidays in Mallorca and gathered around a Christmas tree at their home. 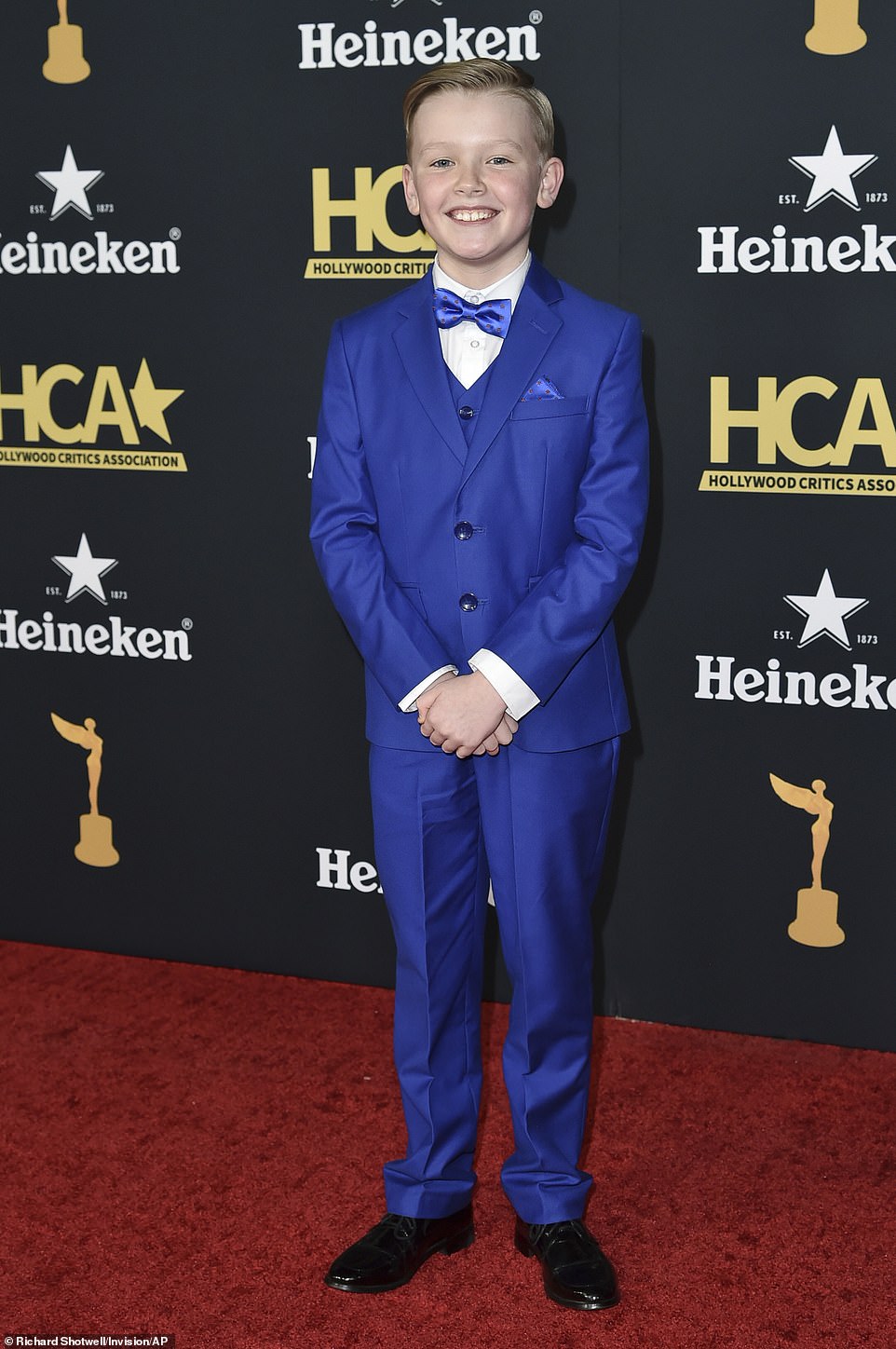 The schoolboy hails from the village of Gilford, about 25 miles from Belfast and trained at the Shelley Lowry School for speech and drama in his spare time while attending St John’s Primary School. He secured the Hollywood role after sending in a tape of his work and having a series of virtual interviews and auditions.

His mother, Shauneen, now his full-time manager, said she spotted her son’s talent when he was only four, after he recited the poem Roger Was A Razor Fish at school.

She told Belfast Live in October: ‘It all started off with Jude whenever he was four. I used to bring him to all these Speech and Drama festivals and he cleaned up in every festival every year. I could see when he was in nursery, and even when he was in primary school, that when he’d be asked to read a poem in public or something – I could see how talented he was.’

After being encouraged to go for roles by talent manager Lowry, the actor began sending out tapes, saying: ‘The first audition I ever did was a self-tape,’ he said.

‘I go to speech and drama lessons and I do poems and extracts from books and my teacher sent through this self-tape and I filmed it and I got called back like five or six times.’

The self-tape was a scene from a film chosen by his mother. He used a scene from Belfast for future auditions before the final hurdle: A call with Sir Kenneth.

‘When the email came through I ran around my house screaming for about five minutes,’ Jude said of winning the role.

‘I didn’t even get half way through and I read it all and I found out who would be in it and I was amazed… It was just crazy.’ 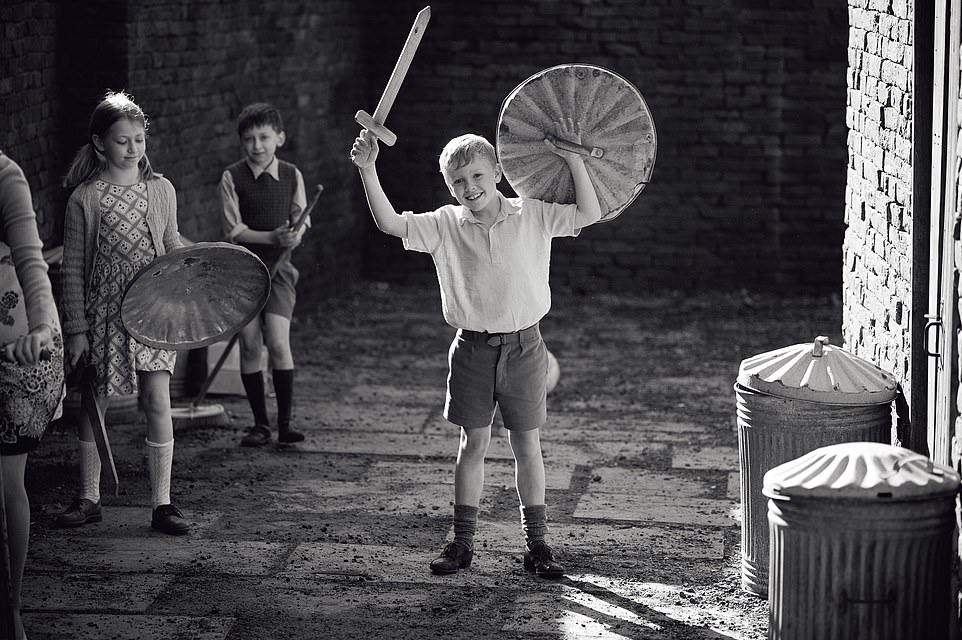 Jude Hill’s stellar performance in Belfast has seen him already win awards for his portrayal of Buddy, although he missed out on a predicted Oscar nomination 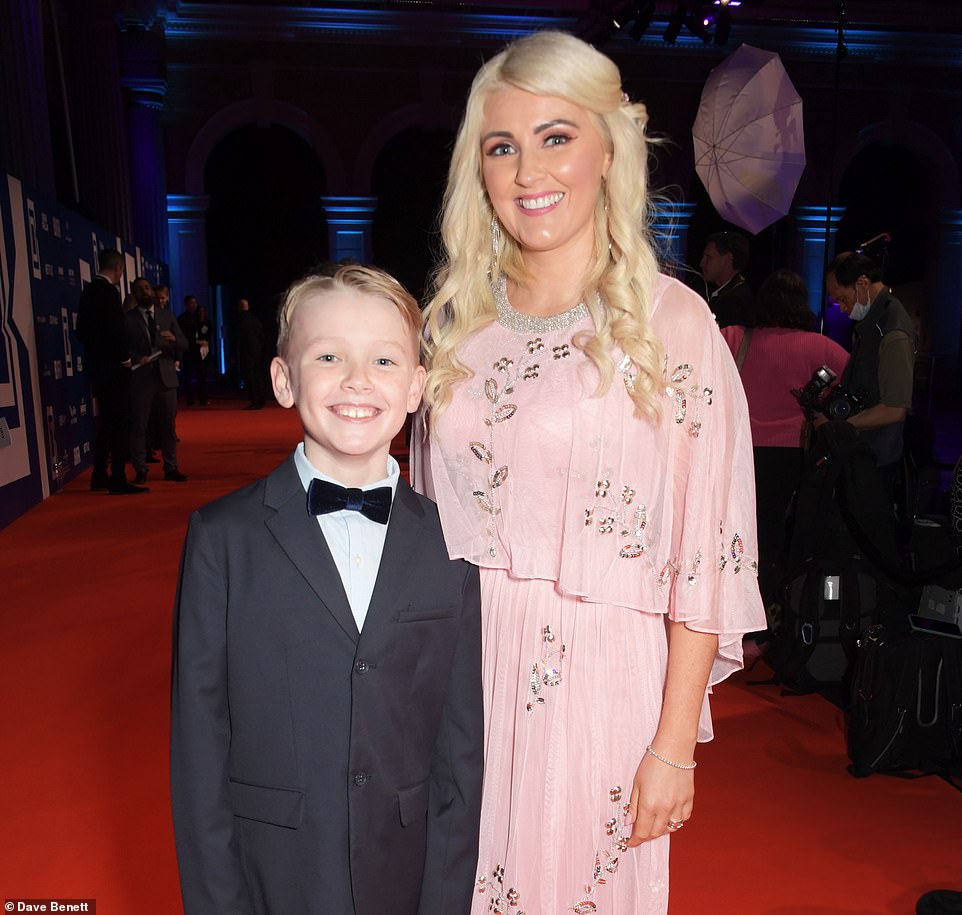 Jude Hill and his mother Shauneen Hill arrive the 24th British Independent Film Awards at Old Billingsgate on December 5, 2021 in London. It seems that his newfound fame is not going to his head. His mother said: ‘He’s very humble and he’s such a good boy about it’ 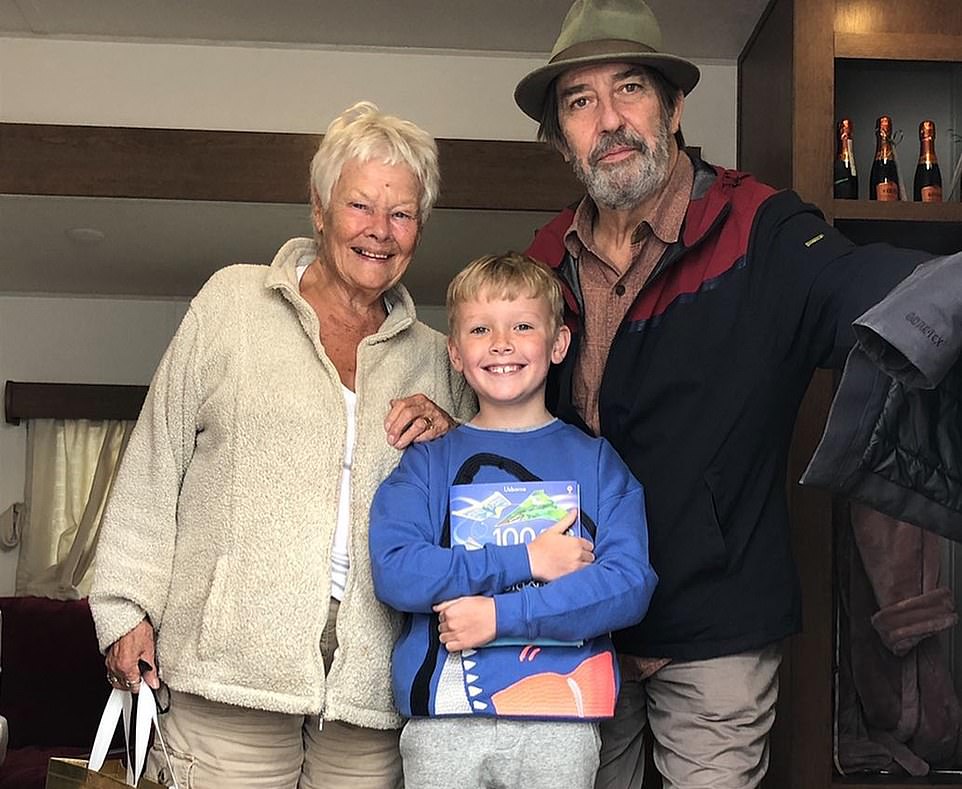 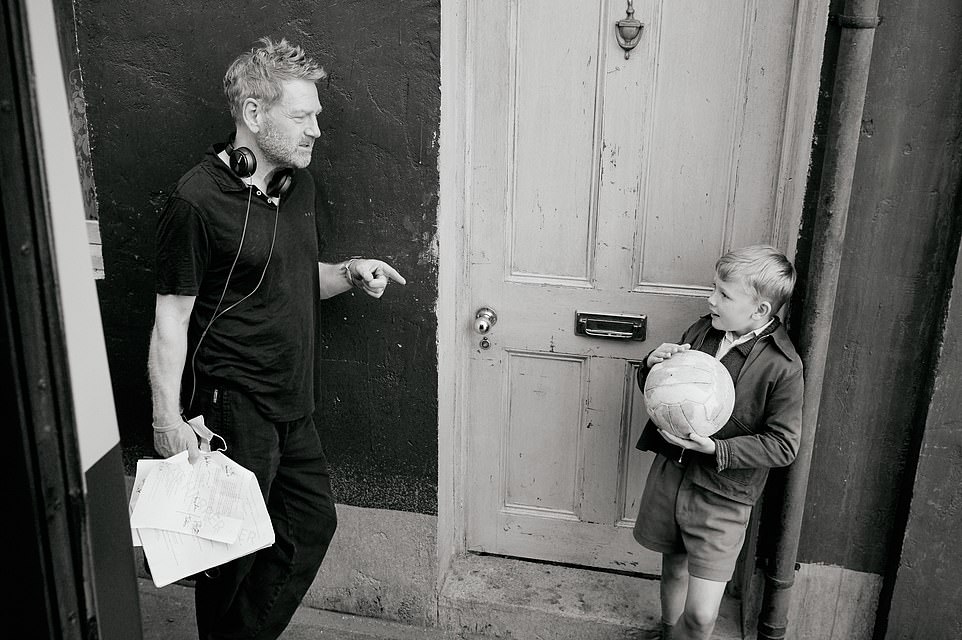 On set: Director Kenneth Branagh (left) and Jude Hill (right) during the filming of Belfast 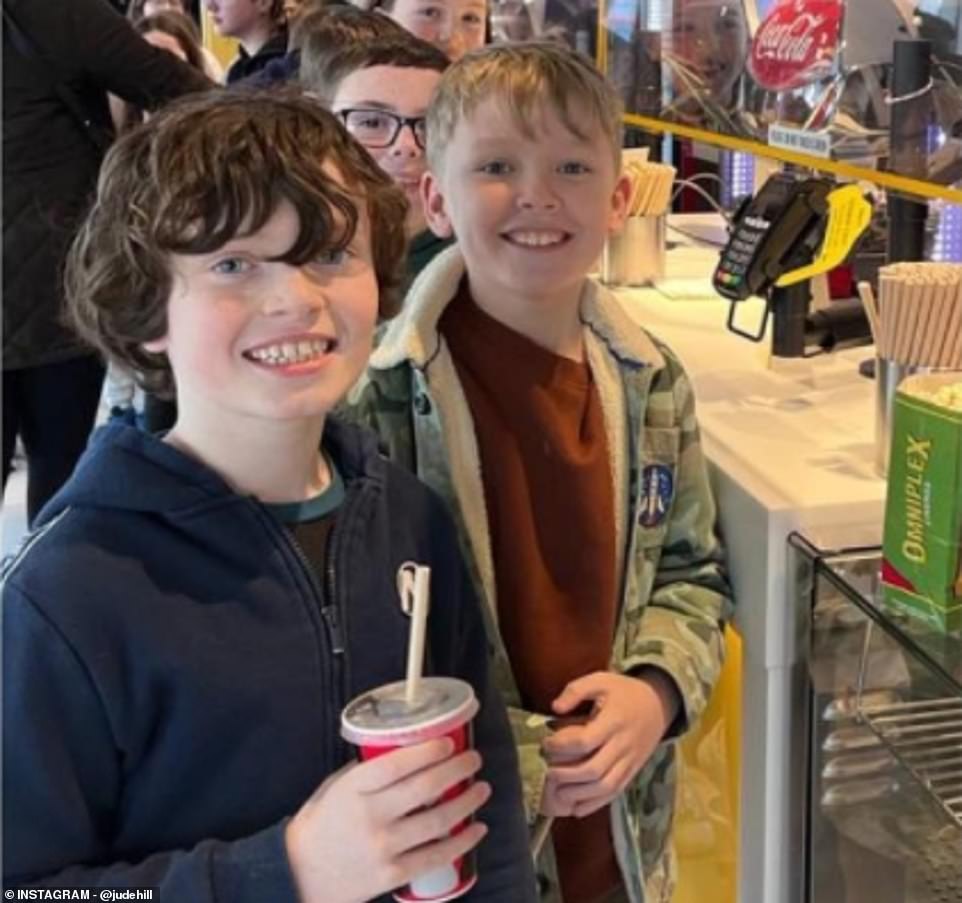 Friends: The schoolboy’s principal organised a trip to the cinema so that Hill’s pals could see him in action 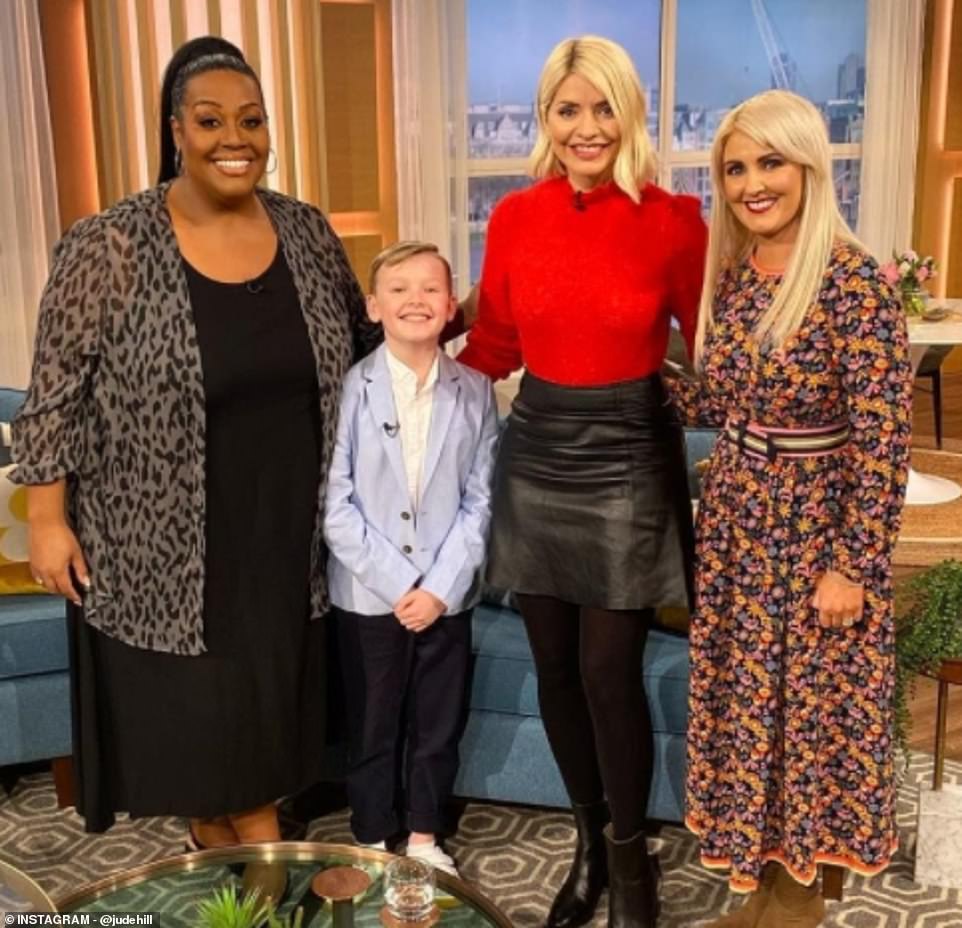 His younger sister, Georgia, is the star of a short film written, Torn, by Lowry, in which Jude also stars, proving that the acting genes run in the family. She also recently finished filming Mimi’s World, a Channel 5 children’s drama, and appeared in the CBBC show Silverpoint.

‘When I was in LA with Jude, everyone I spoke to knew about the talent here. They’re waiting to see who’s going to be the next Dornan, Branagh or Neeson.’

It seems Jude’s not going to let his newfound fame is not going to his head. His mother said: ‘He’s very humble and he’s such a good boy about it.

Even when he went back to school after [filming], his teachers were asking him lots of questions and he didn’t really talk about it, saying: ‘He’s just a normal boy and that’s how we and him want to stay.’

It just didn’t seem possible that one of the greatest Shakespearian actors of his generation and modest owner of such a mellifluous, beautifully modulated speaking voice could ever have been a wee Belfast boy with an Ulster brogue.

Belfast – clearly a labour of very personal love for Branagh – is the film that puts me right and it does so quite brilliantly.

Immensely moving at times, properly chilling at others (not surprising, given its late 1960s setting just as The Troubles get under way) it’s also sweet, charming and funny too. If you can get through it without shedding a quiet tear… well, I’ll be surprised and disappointed. 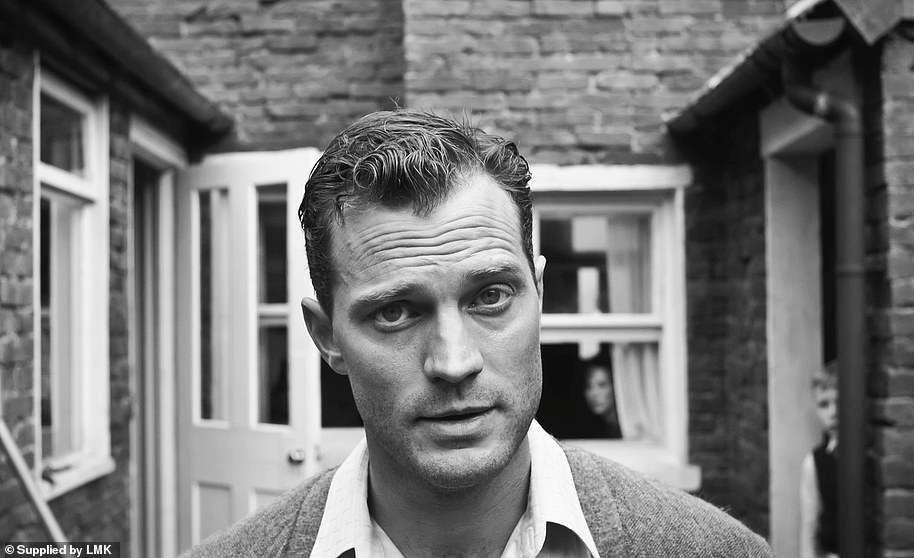 Jamie Dornan (above) is spot on as Buddy’s father, already forced to travel to England for work and now having to face down Loyalist gangs when he returns for the weekends

Directing from his own screenplay, what Branagh depicts is a fictionalised version of the difficult, frightening months in 1969 that eventually led to his own working-class Protestant family making the decision to move to England.

As Loyalist thugs arrive to force out Catholic neighbours they’ve lived happily next door to for years, Ma (Caitriona Balfe) and Pa (Jamie Dornan) must decide what’s best for their two sons, especially the youngest, the curious and precociously articulate Buddy (Jude Hill). 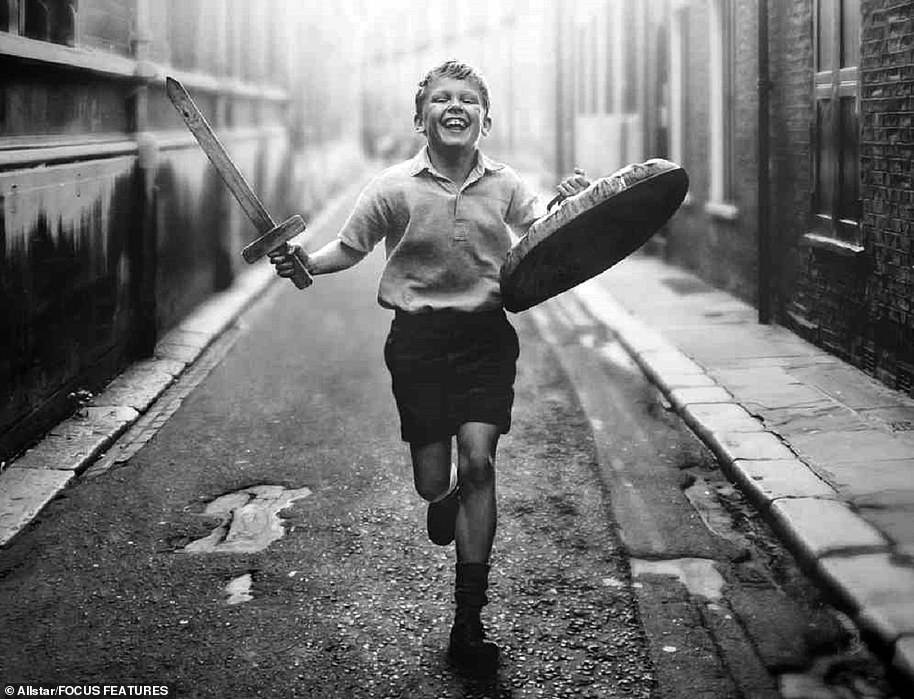 As Loyalist thugs arrive to force out Catholic neighbours, Ma and Pa must decide what’s best for their sons, especially the curious and precociously articulate Buddy (Jude Hill, above)

Ah, that’ll be Ken, I think we can safely assume.

With echoes of Alfonso Cuarón’s similarly personal Roma, Branagh shoots the past in beautiful black and white.

But, exquisitely, he picks out the things that will offer him his own means of escape – visits to the cinema and theatre – in glorious, life-shaping colour.

Look out for the moment when young Buddy is sitting on the kerbside, reading the Marvel comic, Thor. Some 40 years later, Branagh would, of course, direct the film version.

For anyone who grew up around that time, the production design is as evocative as the violent setting is alarming. This is a film full of ‘Oh, I remember that’ moments. But, like everything Branagh is involved with, it’s made by its performances. 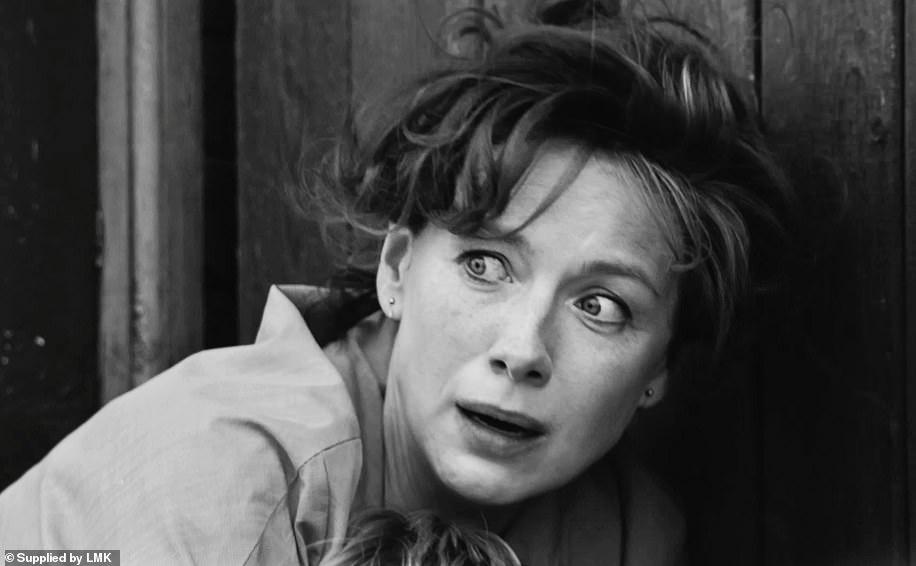 Directing from his own screenplay, what Branagh depicts is a fictionalised version of the difficult, frightening months in 1969. Above: Caitriona Balfe as Ma

Yes, Judi Dench is in it – she’s in virtually everything he does – but for once, as Granny, she plays second fiddle.

Young Jude is a fresh-faced joy as Buddy (we’ve surely all known little boys like that) while Jamie Dornan is spot on as his father, already forced to travel to England for work and now having to face down Loyalist gangs when he returns for the weekends.

But the stand-out performances belong to Ciarán Hinds, who steals every scene he is in as Buddy’s Pop, and to the beautiful Balfe as Ma. Award nominations are surely heading her way.