Banks have been accused of selling homebuyers overpriced life insurance when they sign up for a mortgage. 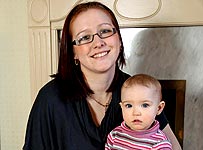 Insurance sold with a £200,000 mortgage can cost up to £300 a year more with some high street banks than insurance bought independently.

Basic level life insurance is commonly sold with a mortgage. The borrower pays the same sum every month and the insurer agrees to repay the mortgage if the borrowers dies.

But single people with no dependants may not need this because when they die their home can be sold to repay the loan.

But insurer Legal & General offers similar cover for £12.99 per month — a third of HSBC’s charge.

The cost was greater at Halifax and HSBC partly because the banks do not offer joint policies and insist that each borrower buys their own.

Ray Black of comparison site Money-minder.com, which produced the research, says: ‘It’s not a good idea to accept the first insurance policy your bank offers without shopping around.’

But banks insist their policies are worth paying extra for. A spokesman for HSBC says: ‘In 2010, we accepted 99.9% of death claims. We paid out for our customers at the time it mattered.’

‘Most people opt for the policy to start paying after they’ve been signed off work for three months.’

However, check carefully for exclusions — some won’t pay out if you make a claim soon after signing up. Critical illness insurance pays a lump sum if you are diagnosed with cancer or suffer a serious illness such as a heart attack or stroke. But insurers are becoming tougher over pay-outs because many diseases that were once judged to be incurable are now considered curable.

Be wary of lenders trying to sell you more cover than you need for your mortgage. Many people have life cover from their employer — and, in some cases, it is possible to increase this.

Always shop around using a broker or comparison site. The British Insurance Brokers Association’s ‘find a broker line’ is on 0870 950 1790.

Other tricks for cutting life cover costs are explained here.

Sarah and Michael Ferris have bought their first home in Manchester.

They avoided buying life insurance with their mortgage provider, HSBC, instead buying via a comparison site.

Mrs Ferris, who works for a construction company, says: ‘I hate being ripped off, so I use comparison sites to find the best insurance. Now that we’ve bought our home and we have Megan, we wanted a bit of security.

‘I wouldn’t want Mike to struggle to pay for our mortgage and childcare if something happened to me.’