How much money should you spend on your children’s Christmas presents?


A doting mother has defended herself after a photo of the huge haul of gifts she bought her toddler for Christmas was criticised by other parents.

Alicia Snoeks, 33, from Townsville, Queensland has bought more than $1,400 worth of toys for her three-year-old daughter, and may still buy more. She also has a six week old son, but he’s one only being given some clothes and a baby bouncer.

The mum-of-two admitted she was ‘never really a Christmas person’ until she had children, but told Daily Mail Australia she now goes above and beyond to make the magic of the season flow through her home. 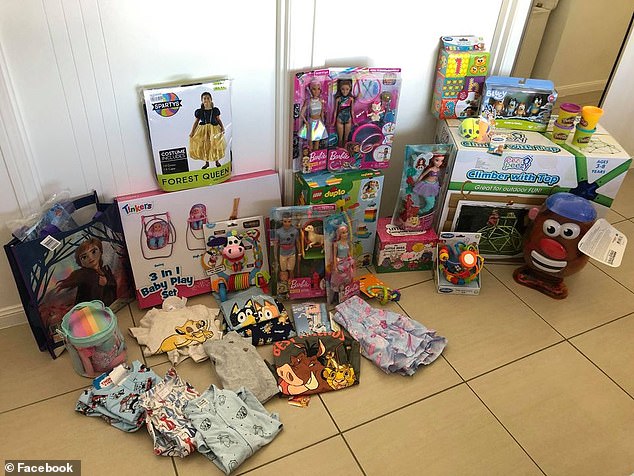 Alicia Snoeks, 33, from Townsville in Queensland has bought $1400 worth of toys for her three-year-old daughter, and may still buy more 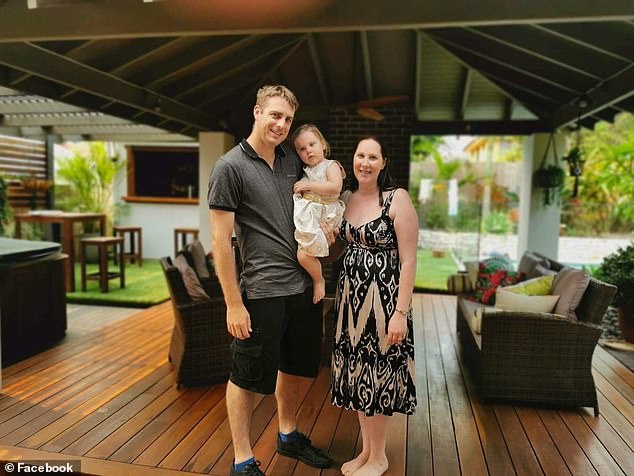 Dad William, 36, Rosalie, 3 and mum Alicia, 33 – William and Alicia have only started ‘making an effort’ for Christmas since they had children

‘Christmas is all about her,’ the mum said of her daughter, Rosalie, who is three.

Her six-week-old son is ‘too little’ to open presents, so his gifts are mostly so his big sister realises others can have gifts too.

‘We don’t want her thinking he is on the bad list,’ she said.

The mother has faced some criticism over the gifts, which include a climbing wall and trampoline with many saying the children will grow up ‘entitled’ or ‘believing they deserve everything’.

‘It will be quite overwhelming for a three-year-old….hardly any of the things will be played with,’ one woman said.

Instead of taking it to heart the mum is excited for Christmas morning when her daughter can open all of the presents under the tree. 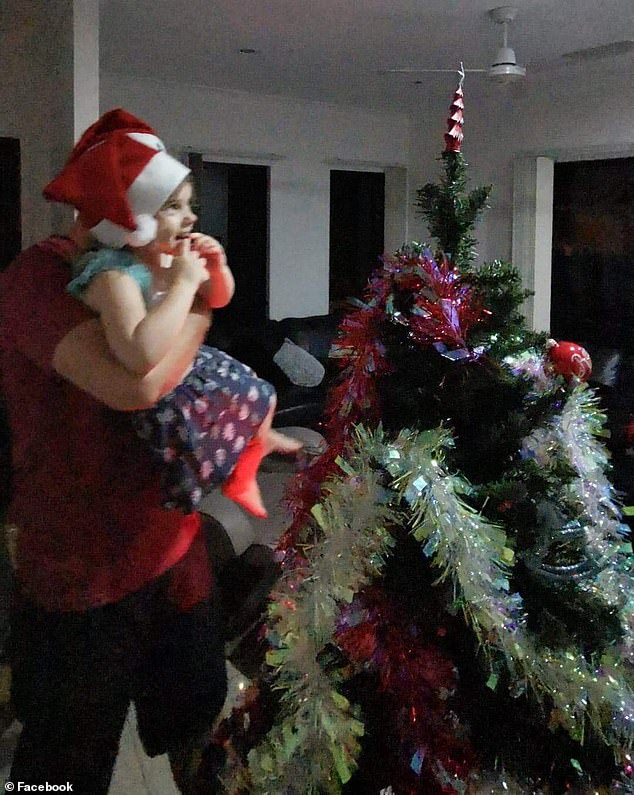 Christmas is all about the three-year-old this year, as she adjusts to having a little brother and moving to a new town

‘We don’t want Santa to get all the credit for the “good” toys, so they will be from us,’ she said.

Many people agreed the presents shouldn’t ‘be from Santa’ as it is not fair on other children who come from poorer homes.

How much money should parents spend on each child for Christmas?

‘Other kids will grow up and not understand why Santa gave them so little but these kids got everything,’ one woman said.

Alicia doesn’t believe she will be spoiling her daughter, and wants to have her involved in Christmas in every way.

The Christmas tree is ‘a work of art’ as it is completely decorated by the three-year-old with no direction from the adults.

The mum has been buying presents since the mid-year toy sales and explains that in her town toys ‘sell out quickly’ so she had to plan ahead.

At the beginning of the month 24 gifts appeared beneath the tree, to be opened each night.

It is an advent calendar of books that Rosalie can open each night before bed. 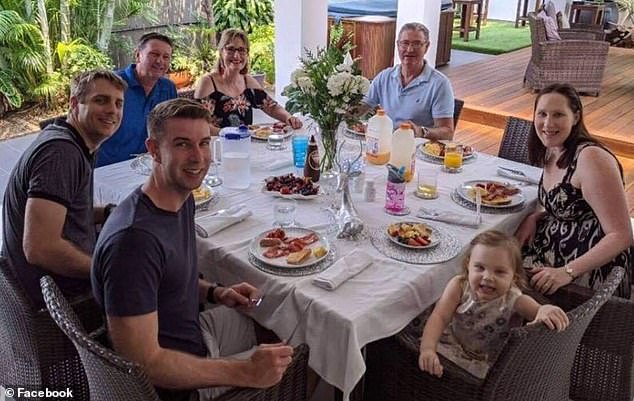 Most Christmases are spent with family however Alicia and William have moved with their children, so this year will just be the four of them

On Christmas Eve the family will celebrate Alicia’s ‘Finnish roots’ and share a gift before bed.

‘It will probably be a doll, if we gave her something exciting she would never go to sleep.’

The ‘most exciting’ gift is the trampoline, which cost $800, more than half of the $1400 spent so far on the youngsters’ gifts. 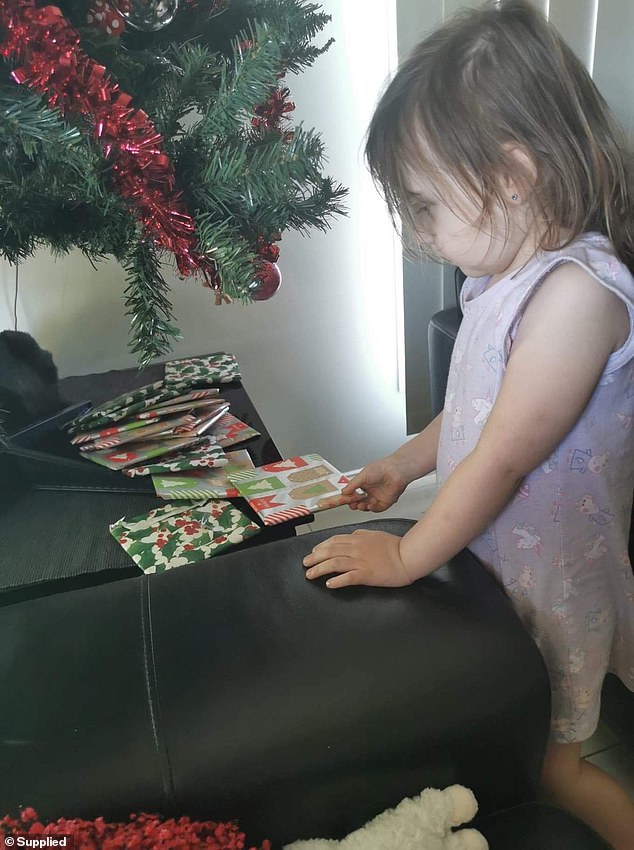 Rosalie, pictured, is allowed to pick one book every night before Christmas as part of the family’s advent calendar 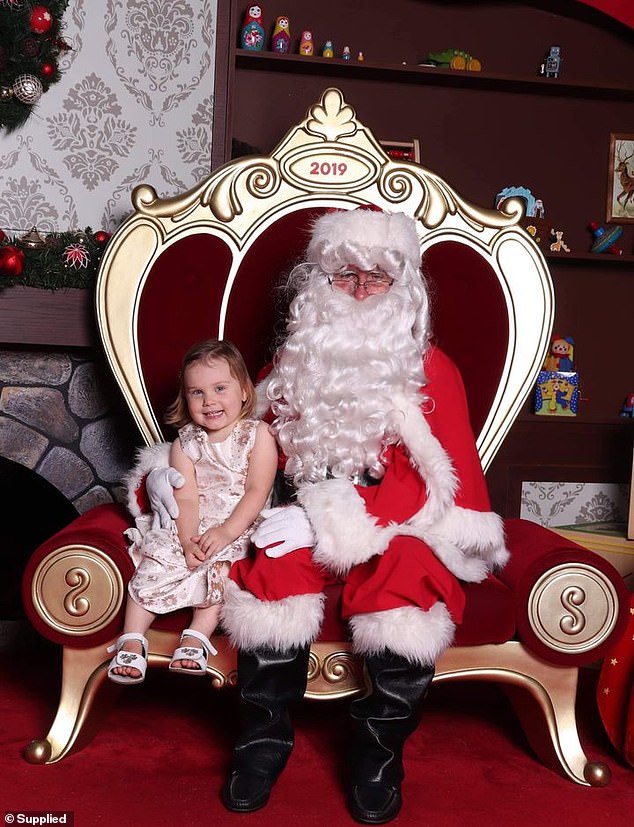 ‘You only get a few years out of cheap trampolines, we will get ten out of this one,’ she said.

Rosalie will wake up on Christmas morning to dolls, clothes, a climbing wall, the trampoline and other ‘bits and pieces’ she ‘likes’.

Her baby brother will mostly get bath toys and clothes as well as a Jumper.

But his name will also be on the big gifts so when he is old enough to use them his sister will understand the need to share.

Brexit: Seven things changing in January and others that remain unresolved