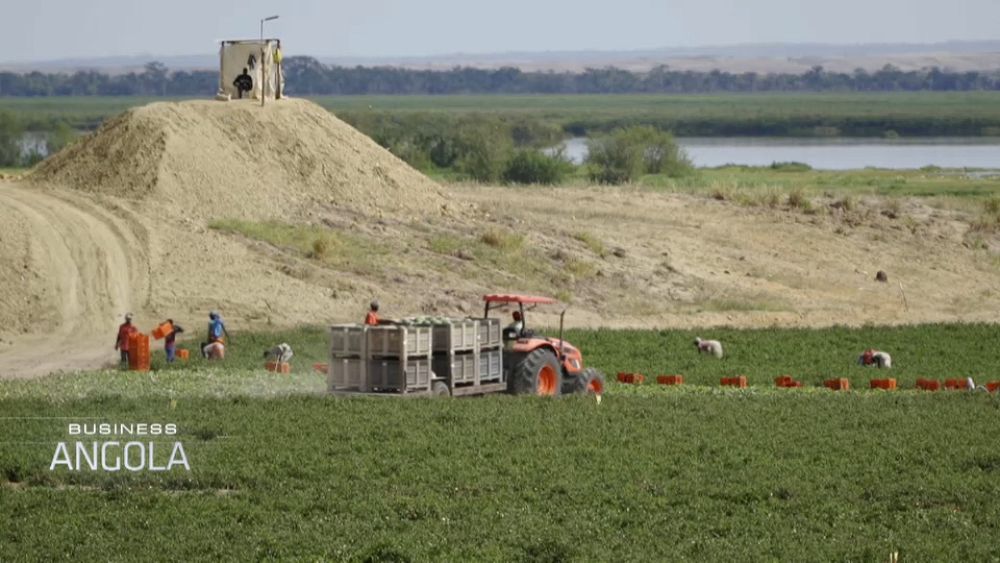 The global pandemic has turned many economies upside down, but, in Angola, the country’s agriculture sector is blooming. We look at how one company has pulled off something quite remarkable. Creating a farm, with foreign export ambitions, in just a matter of months despite the health challenge.

“We’re in Porto Amboim on the road that leads to the Kaundo Farm, where we have cleared more than 500 hectares of land and we have around 400 already in high production,” said João Macedo, CEO, Novagrolider as he shows us the farm.

Quite a feat when you consider, just a year ago, this vast area of land in Kwanza Sul province, south of Luanda, lay abandoned.

An attractive microclimate and rich, fertile soils too good to resist.

“This land here is one of the best I have ever seen,” said Macedo. “After doing (an) analysis, I saw there was no better in Angola.”

Novagrolider invested, and grew a farm ready for harvesting within six months. And all this during the global pandemic.

“The COVID-19 problem affects some things, but not in a way that stops us from carrying out what we’ve been looking forward to doing,” said Macedo. “We have already harvested melons, watermelons, pumpkins, tomatoes, and so on. In a while, we’ll also start to harvest mangoes and grapes. We will do much more here.

Commercial agriculture is a growing sector, as Angola diversifies its economy.

The pandemic helping to fuel a rise in national production, also cushioning the country from oil industry shocks.

This new farm has been long-awaited by the local community.

Zefa Marimbi, Communal Administrator of Capolo, Porto Amboim said, “More than 12 entrepreneurs came here. They always quit. The problem was access. They saw our road and gave up. Until one day, a businessman fell from the sky. He said: ‘I’ll do the road.’”

That businessman was João, the boss of Novagrolider who built this new 25-kilometre road with his company’s private investment.

“People woke up and finally realised that Porto Amboim exists because of the new Novagrolider company,” said Marimbi. “Young people already have jobs now. The community already earns something. We have dry areas and this business has made a lot of efforts to bring water to this population.”

In fact, Kaundo farm already employs around 400 people and the seeds are being sown to expand even further, to 15-hundred workers.

Aldenicio Lino, Production Manager, Kaundo Farm said, “Today, Angola’s fruit is still unknown. But, in the near future, Angola will start to rise because its fruit is good and in line with international standards. What’s missing is a track record, years on the road, people knowing Angolan fruit.”

And this farm has big ambitions to get the world tasting its produce.

The company behind it already supplies Portugal and Spain and is targeting markets such as Namibia, Italy and Poland to scale-up its exports.

Lino added, “Whoever eats fruit from Angola starts to get a taste for it. We’ve received feedback through social media networks, Facebook, and Instagram. People send a picture on Whatsapp to say they bought a piece of fruit from Angola and it’s a beautiful fruit.”

Vintage toys in high demand, with collectors paying thousands of dollars to relive their childhoods