How POSH is your nosh? From your marmalade brand to your loaf, what you eat still defines your class

How do you pick up your peas from the plate? I ask because the humble little legume turns out to be the ultimate challenge when it comes to polite eating, the Mount Everest of etiquette.

Debrett’s, the bible of good manners, is firm on the matter. ‘It may be necessary to use mashed potato to make peas stick to the fork, but it is incorrect to turn the fork over and scoop.’

The notion of using a spoon — clearly the most practical tool for the job — or the underside of the fork is anathema, leaving polite folk prodding away with their forks, one pea per tine, or squashing lots of them on to the back of their fork, then seeing the whole dollop drop on to the table en route to the mouth. Ridiculous. 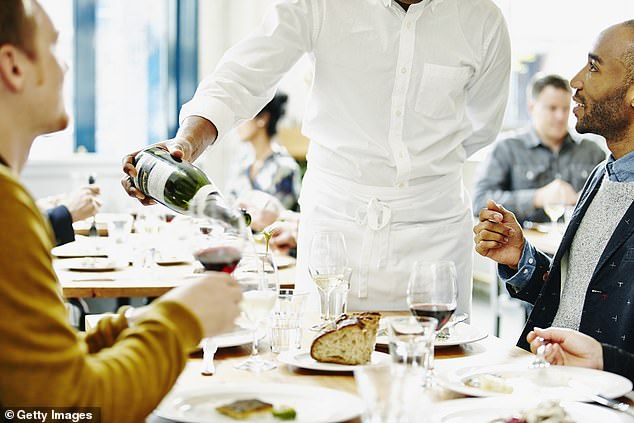 But here is just one of a myriad conventions that turn eating into a minefield of social embarrassment —highlighted in a new book by food historian Pen Vogler.

What and how we eat, what we call our meals — tea, dinner, supper? — and where we take them — at a table, in front of the telly? — are indicators of where we stand (or, better still, sit) in the social order.

Food and class are inextricably mixed as much today in the supposedly democratic 21st century as they were when medieval barons dined ‘above the salt’, putting the lower orders in their place.

Vogler calls her book Scoff, which sums up her thesis because the word has two dictionary meanings. One is to eat food, the other ‘to speak to someone in a scornfully derisive or mocking way’ (OED). With every mouthful, we are identifying our own aloof position on the social ladder while looking down on others.

Food, then, is much more than mere sustenance. It’s a marker and a weapon. As the 19th-century French gastronome Jean-Anthelme Brillat-Savarin pithily put it, you are what you eat.

In the ever-flourishing British class system, shopping baskets are an open recipe book, revealing who we are. Typhoo or Earl Grey, Kingsmill or sourdough, stir-fry or Pot Noodle, battery or free-range, Golden Shred or Oxford Marmalade, salad cream or mayonnaise? Your preference points to where you come from and where you’re going (or think you’re going).

And what is U and non-U, to use Nancy Mitford’s damning definition, changes with such speed and irrationality that it is all too easy to be caught out, left behind, ridiculed.

Today’s crushed avocado cult may yet backfire — excised from the must-have shopping list because of its impact on the environment — and you don’t want to be caught with guacamole on your face. 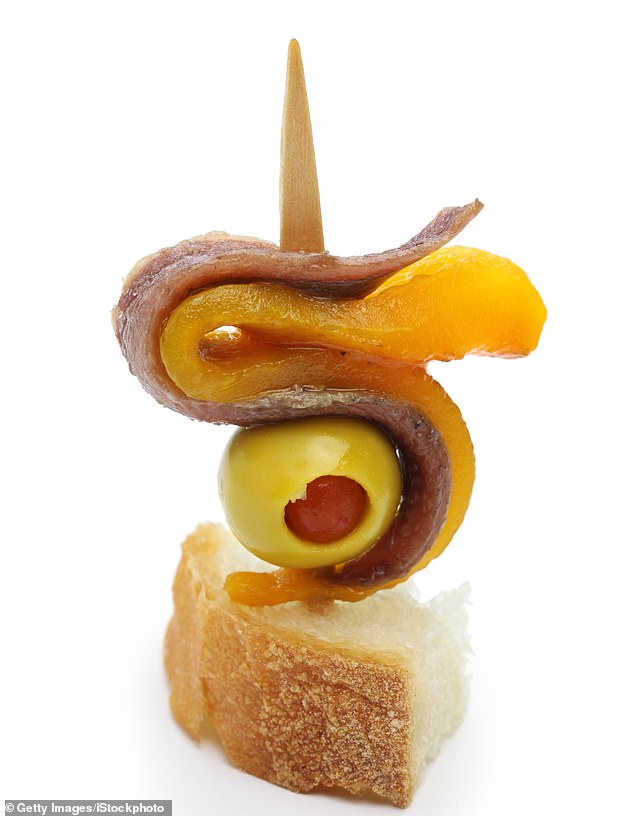 Victorian invention the fish knife, has been branded unacceptable by etiquette experts despite being elegant (file image)

Take the fish knife, a Victorian invention, with its unique curvature and elaborate decoration.

Now, it is to be found in unsold bundles in antique shops or tucked away at the back of cutlery drawers, but never, darling, never, to be seen on a dining room table. Perish the thought.

It’s decades since John Betjeman cast them into the outer darkness with his sneering ‘Phone for the fish knives, Norman’ in How To Get On In Society, a poem about social climbing in which he also ridiculed the dear old doily and the serviette.

A few years ago, Tatler magazine decreed that the once-shunned ‘pardon’ was now socially acceptable again, but there was no such reprieve for the fish knife. ‘Fish knives,’ it ordained, ‘will never be fine.’

Though why remains a mystery. As Vogler points out, they are not only elegant and pretty but perfectly shaped for the job of pulling the delicate flesh of fish away from the bones.

Once upon a time it was de rigueur to have different cutlery for different purposes. Posh Victorians had forks for everything — terrapin, lobster, snail, sardines, pastry, dessert, even bread — with dinner guests faced by an armoury of weapons when they sat down. 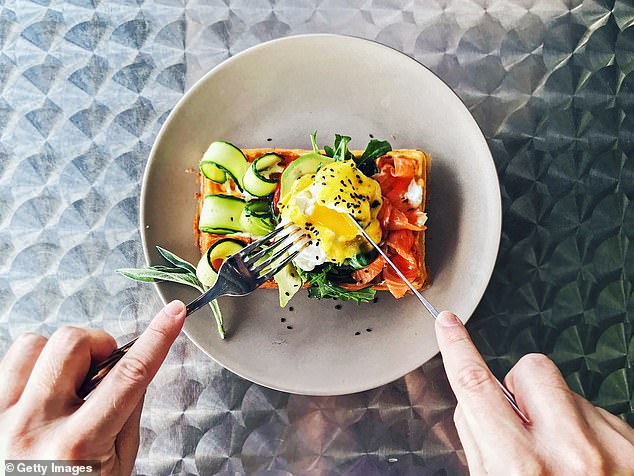 Pen claims we put more time and energy into judging people on what we eat and the way we eat it, than the quality of the food itself (file image)

Each was supposedly identified by the size, the number of tines (three to five), the length of the tine, the curve and whether there was a wide and sharpened edge for cutting pastry.

Knowing which to pick up for which dish was the trick, and a way for the upper-class host to ward off (and, better still, confuse and humiliate) the ungenteel.

Such pretension has now gone. One-size fork fits all, and we’re probably the better for it. But possibly not for long, as we head towards a forkless society with fast food of fried chicken, burgers, pizza and sandwiches taking over.

Fingers are now perfectly acceptable for much of our eating, as they were centuries ago, before etiquette (and cutlery) intervened.

Napkins, and how you wield them, are another key social indicator, though utterly illogical.

The best way to ensure a napkin does its job of protecting the eater’s clothes is obviously to tuck it under the collar and let it drop down in front of you. Except that is so working class! So polite people hide them on their laps, and dribble gravy and red wine down their shirt fronts, putting class before common sense.

But that’s the British way. According to Vogler, we traditionally put more time and energy into judging people on what we eat and the way we eat it, or worrying about what people think of us, than the quality of the food itself. 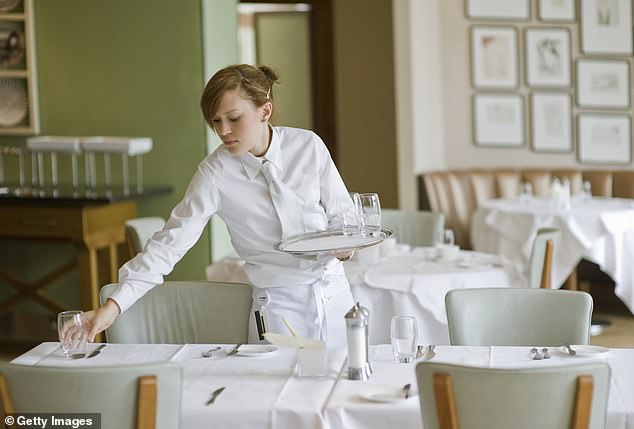 She writes: ‘In a country where even letters are first or second class, eating, with its innate social function and attendant rituals, is a way of firing up rivalry, envy and social unease.’

Or as the Hungarian-born humorist George Mikes put it: ‘On the Continent people have good food; in England they have good table manners.’

Nothing tells us more about the class divide over food than the words we use for the various meals throughout the day. Any British antennae will pick up something about your background if you have ‘dinner’ at midday and ‘tea’ in the early evening.

From the age of the diarist Samuel Pepys, ‘dinner’ has been pushed back by about eight hours, as the toffs chose to eat later and later to distance themselves from the annoying, encroaching middles — and the middles moved later and later to emulate them.

During the 17th century, ‘dinner’ was around midday; it was mid-afternoon in the 18th century. Most working people had a communal main meal — dinner — in the middle of the day. 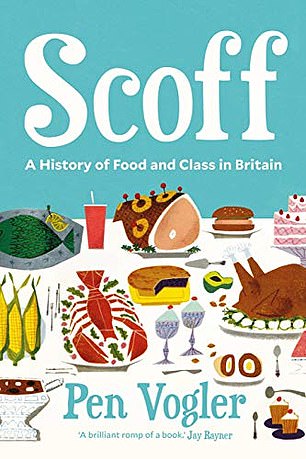 For farm workers this was usually made by the women of the farmer’s household and eaten together around the kitchen table, or in the fields.

Those working in mills in Manchester and Leeds, in the factories of the Midlands and the mines of Wales, Newcastle and the Midlands worked from 6am to 7.30pm, with 40 minutes to eat their dinner in the middle. It’s a distinction that survives to this day. Northerners, particularly the working classes, still have ‘dinner’ between noon and 2pm and ‘tea’ in the early evening. Southerners (and swanky Northerners) just have ‘lunch’ and ‘dinner’.

Lunch — or ‘noonshine’, as Jane Austen called it — was born because fashionable society kept on dining later and later to put some clear blue hours between them and the mercantile and professional classes.

This can cause confusion even today. Vogler cites writer Helen Fielding, who grew up in Yorkshire and was invited to her tutor’s house for dinner in her first week at Oxford.

‘We duly turned up in the middle of the day to be greeted by kindly astonishment and a gracious attempt to explain how things worked in the sophisticated world we were about to enter.’

This excellent history is full of fascinating facts about the food we eat. I never realised that sandwiches and desks were invented at the same point in history. Nor that the English were cooking and eating macaroni pasta way back in 1390.

More tellingly, it pricks the pomposity of many of our social conventions surrounding eating. So I say feel free to gobble down your peas in any way you like — ideally on a fish knife, of course!

UK Athletics approve Mo Farah appearing on this year’s ‘I’m A Celebrity Get Me Out of Here!’ series

UK Athletics approve Mo Farah appearing on this year's 'I'm A Celebrity Get Me Out of Here!' series