How the Cabinet stopped Boris’ ‘insane’ plan to cancel Christmas


Boris Johnson was forced to abandon his plans to cancel Christmas after a revolt by furious Cabinet colleagues who warned that the idea was ‘insane’, anti-lockdown Ministers have told The Mail on Sunday.

They described how a three-pronged attack by former Brexit Minister David Frost, Chancellor Rishi Sunak and Commons Leader Jacob Rees-Mogg forced the Prime Minister to ignore demands by his scientific advisers for families to be banned from mixing over the festive period.

Their account of how close the country came to another lockdown in December can be revealed now for the first time, at the end of a week in which the Cabinet’s anti-restriction Ministers have been vindicated. 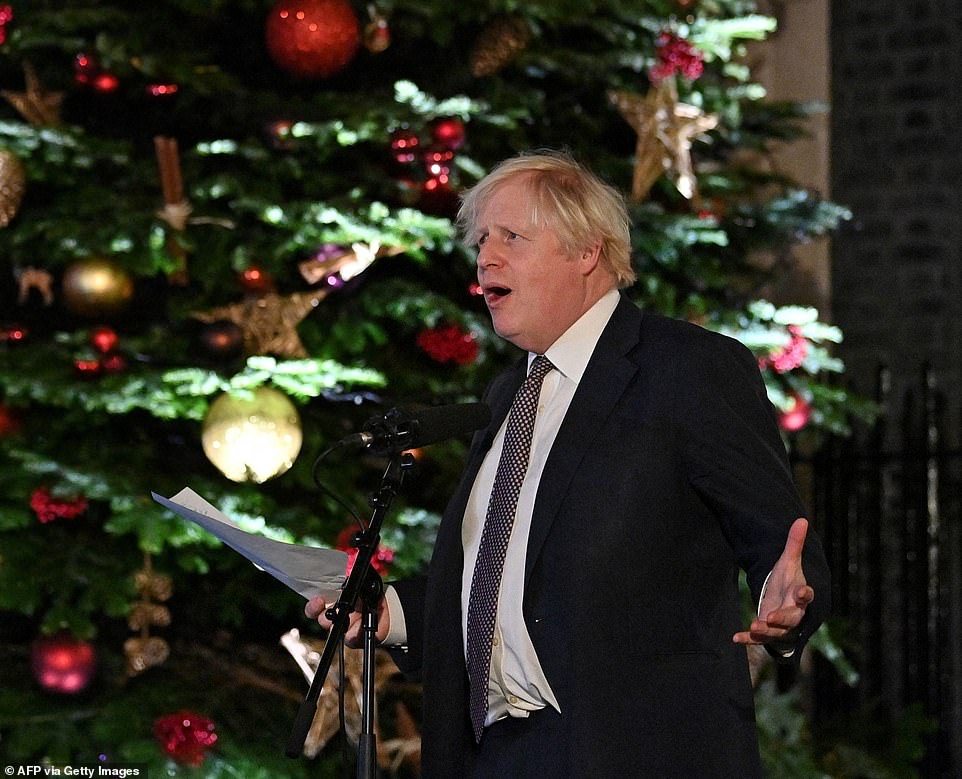 Plan B restrictions such as compulsory face masks in indoor venues have now been lifted in England and new economic data predicts the UK will have the fastest growth of any of the world’s leading economies this year.

Allies of Mr Johnson contest the claims that the PM was determined to lock down the country, insisting that he kept an open mind throughout the discussions.

But other insiders have painted a detailed picture of how political pressure from Cabinet colleagues ultimately persuaded him to overrule dire warnings from experts.

The drama started on December 15 when the Chief Medical Officer, Professor Sir Chris Whitty, used a press conference to warn that the NHS faced being overwhelmed because of the ‘absolutely phenomenal pace’ at which the new Omicron variant was spreading.

Prof Whitty also claimed that there would be an ‘inevitable increase in hospitalisations’, because cases were doubling every two days. Although there was evidence from South Africa, where Omicron had first been identified, that the variant was actually linked to a substantial reduction in the number of patients ending up in hospital, the adviser urged ‘really serious caution’ over those reports.

Prof Whitty, in tandem with Chief Scientific Adviser Sir Patrick Vallance and experts on the Scientific Advisory Group for Emergencies (Sage), stands accused by senior Whitehall figures of taking a selective approach to the data which was emerging at the time. 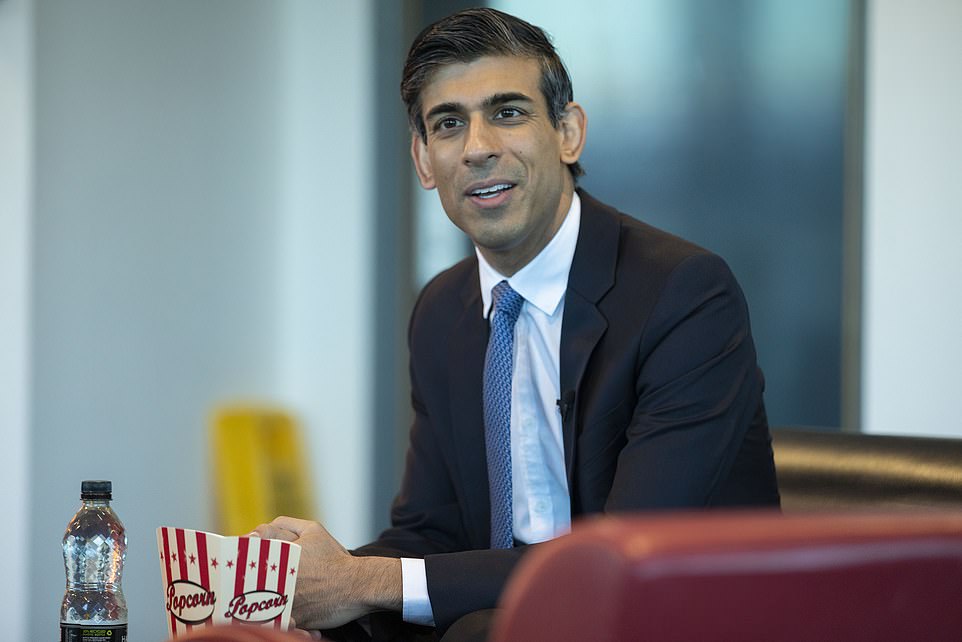 Former Brexit Minister David Frost, Chancellor Rishi Sunak (pictured) and Commons Leader Jacob Rees-Mogg forced the Prime Minister to ignore demands by his scientific advisers for families to be banned from mixing over the festive period

As oneinsider said: ‘When the early evidence from South Africa suggested that Omicron cases were rising dangerously fast, Whitty and the scientists took it seriously, saying ‘the South Africans are very good at data’.

The actual evidence showed that it wasn’t translating in hospital admissions or into deaths. Despite this, the advice was to lock down.

‘But when subsequent data then indicated that rates of hospitalisation and deaths were not increasing, their stance changed: they argued that the data was highly unreliable, and we should look instead at the increase in our own hospitalisation rates.’

The anti-lockdown Ministers – known as Covid ‘hawks’ – were particularly angered by Prof Whitty’s advice to limit social mixing in the run-up to Christmas, which they knew would have an immediate impact on the hospitality industry.

When Prof Whitty made his remarks, Mr Sunak was 5,000 miles away in California, having flown out the previous day for his first holiday in two years.

Fearing that the Prime Minister would cave in to the scientists and cancel Christmas, the Chancellor rang Mr Johnson to urge restraint; he then made immediate arrangements to fly back to London.

Mr Sunak, who has been the most consistent opponent of Covid restrictions since the pandemic first broke out, arrived back in the UK on Friday December 17.

He went straight in to No 10 to see the Prime Minister, who was, it is claimed, preparing to use a press conference that weekend to impose new restrictions on social interactions. 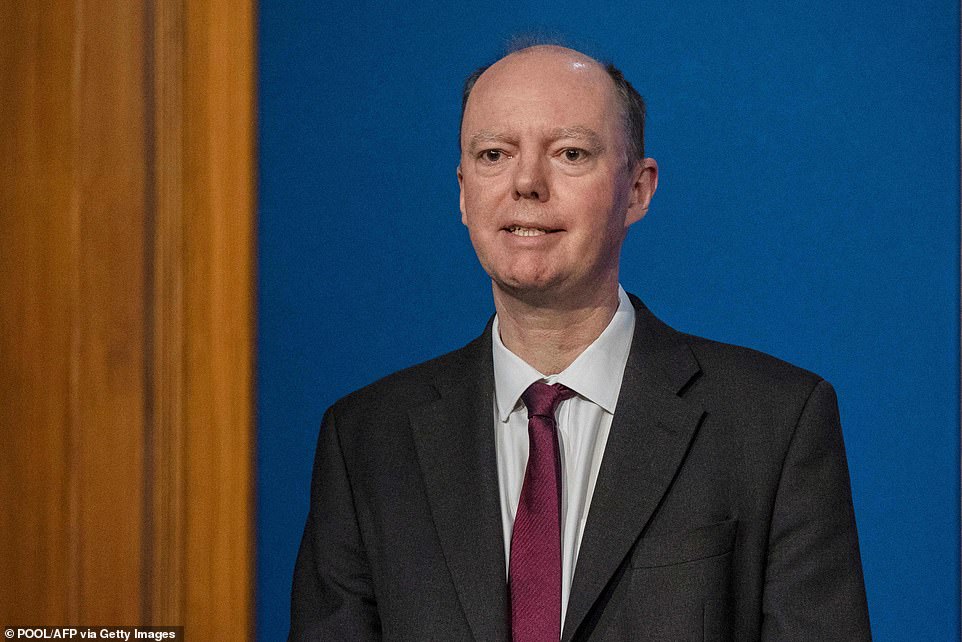 The scientists’ advice over Christmas was to lock the county down as it had the year before. Pictured: Prof Chris Whitty

Mr Sunak insisted that the data did not justify such draconian action, because deeper analysis of the evidence showed that a large proportion of registered Covid admissions to hospitals were actually only detected when patients came in to be treated for a different condition. Mr Johnson agreed to hold off his announcement.

The main advocate for harsher lockdown measures in the Cabinet was Levelling Up Secretary Michael Gove.

Despite his reputation as a buccaneering champion of the free market, Mr Gove has been a safety-first, pro-lockdown ‘dove’ in Cabinet since Ministers first met to discuss the response to Covid in early 2020.

It has led his colleagues to speculate that Mr Gove’s ‘phobic’ personality lies behind the impulse – having conquered a fear of flying, they openly ask if he might suffer from mysophobia, a pathological fear of contamination and germs.

The Chancellor had his hand strengthened by the secret resignation of Lord Frost a week earlier over the ‘political direction of the Government’, including ‘coercive’ Covid measures. 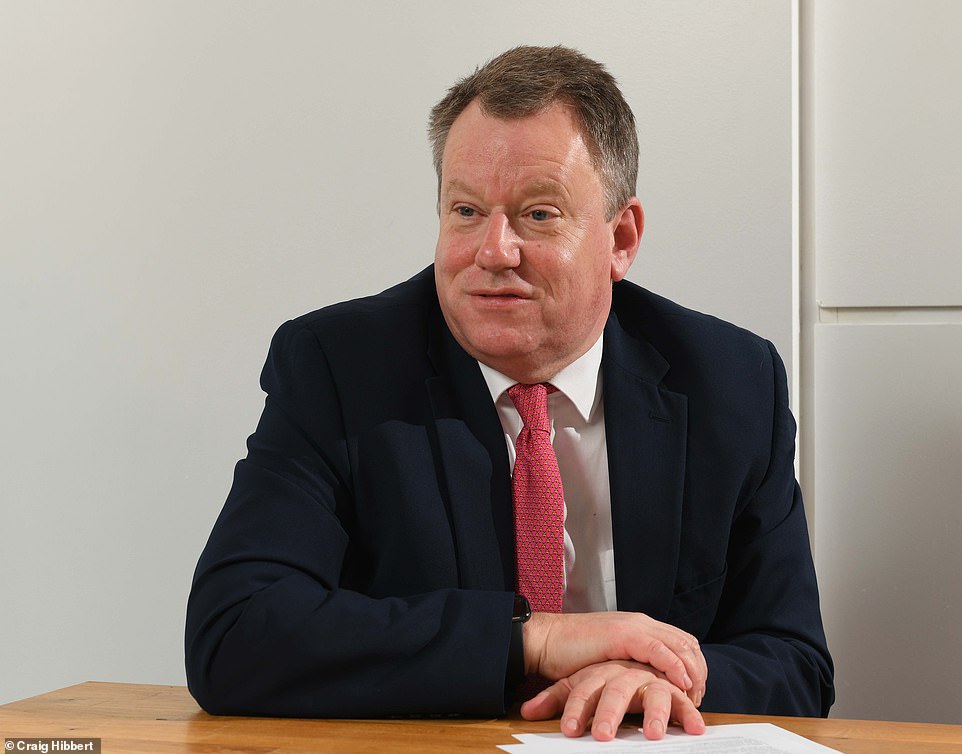 The Chancellor had his hand strengthened by the secret resignation of Lord Frost (pictured) a week earlier over the ‘political direction of the Government’, including ‘coercive’ Covid measures

Lord Frost had agreed to keep his move quiet until January, but his actions hung over Mr Johnson that Saturday, December 18, as the Cabinet were briefed on the data at midday.

At 7.40pm that evening, The Mail on Sunday broke the news of Lord Frost’s resignation – galvanising the dozens of Tory backbenchers opposed to tighter restrictions. Four days earlier, 99 Conservative MPs – around one third of the Tories in the Commons – had voted against the Government on plans to introduce Covid passes for selected venues in England. Their WhatsApp groups buzzed with news of his resignation, which they said was a ‘hammer blow’ for Mr Johnson.

The Prime Minister now feared that if he cancelled Christmas, as advisers were telling him, other Ministers could follow Lord Frost out of the Cabinet. On Sunday December 19, Mr Sunak spoke to Mr Johnson again to warn him that he didn’t have ‘the political capital’ to push through any such measures.

By the time the Cabinet met on Monday afternoon, Mr Johnson had already decided to go with the rebellious ‘hawks’.

In a TV interview, he announced: ‘We’ve had a long discussion in Cabinet for a couple of hours now, a very good discussion, at which we agreed that the situation is extremely difficult and the arguments either way are very, very finely balanced.

‘I must say to people we will have to reserve the possibility of taking further action to protect the public … and we won’t hesitate to take that action. But in the meantime, what I would say to everybody is please exercise caution as you go about your lives.’

Once Christmas had passed, the pressure from Prof Whitty and the scientists started to ease off –because by then it was becoming clear that their doom-laden predictions about a swamped NHS had failed to materialise.

Says an insider: ‘That is when they flipped their message to argue that the NHS was resilient and coping.’ The decision not to lock down appears to have paid an economic dividend. Research published last week concluded that Britain is more attractive to global financial services businesses as than at any time since the Brexit referendum.

A survey of senior decision-makers at international banks, insurers and asset managers found that 87 per cent planned to expand their operations in the UK or to establish a first operation here, the highest number since 2016. 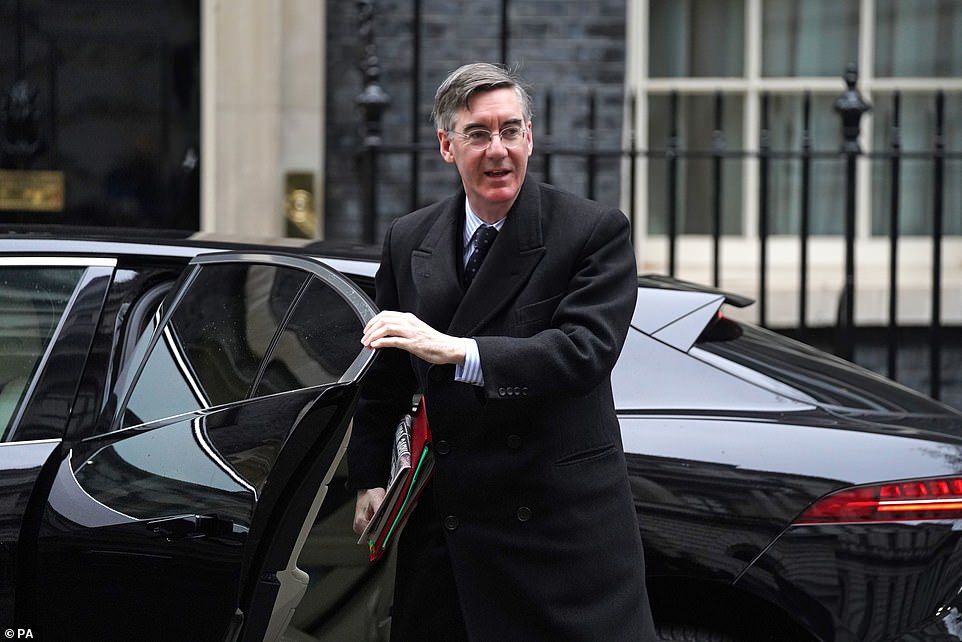 The Prime Minister now feared that if he cancelled Christmas, as advisers were telling him, other Ministers could follow Lord Frost out of the Cabinet. On Sunday December 19, Mr Sunak spoke to Mr Johnson again to warn him that he didn’t have ‘the political capital’ to push through any such measures

In addition, the International Monetary Fund forecast that the UK economy would grow by 4.7 per cent this year, the highest rate amongst the G7 nations.

Lord Frost – now free to reveal the battle which raged in the run-up to Christmas – told The Mail on Sunday last night: ‘I was very concerned in December that we were heading back down the slope to a new lockdown on minimal evidence.

‘I regarded Plan B as pointless, damaging, and dangerous to the country’s ability to recover from the economic and social trauma of the last two years. That’s why I told the PM I couldn’t support it and submitted my resignation.

‘As we had agreed to delay my departure till January, I was still a Minister when I became aware on December 17 that, as I feared, a new lockdown was being considered. I told the PM this was ‘insane’ and that I doubted he’d have the party’s support for this. I know the Chancellor was also instrumental in opposing further measures.

‘The day afterwards, my resignation became public and I left Government. Accordingly I wasn’t in the meetings that finally decided against lockdown. But I believe my initial refusal to accept further measures strengthened the wider opposition in Cabinet and helped prevent another ruined Christmas.

‘Subsequent events have shown this was the right decision. The country is now on the right path again and we must never again consider lockdowns or indeed take any pandemic measures without full and informed public debate.’

Allies of the Prime Minister dispute that he had to be talked out of cancelling Christmas. One said: ‘Boris never wanted to do it – he was keen to have sceptics like Frost in the meetings so that they could make the arguments against a lockdown and he could then use them to face down the scientists.’