The royals’ outpouring of grief for Prince Philip signals a shift in the monarchy’s approach to emotion, according to a royal expert.

While a tear rolled down Prince Charles‘ cheek during his father Prince Philip’s funeral on Saturday afternoon as he followed the Duke of Edinburgh‘s coffin, Her Majesty looked grief-stricken and bowed her head in reverence as she said her final farewells to her husband, who died aged 99, last Friday.

Nigel Cawthorne, author of I Know I Am Rude but I Like It: Prince Philip’s Life in His Own Words, claimed that ‘Prince Philip himself would not countenance public displays of affection.’

Speaking exclusively to FEMAIL, he explained: ‘It is significant that not only Charles but even the Queen appears to have broken this rule.

‘The stiff upper lip is no longer, and under Charles’s increased influence it is likely to be phased out as out of tune with the times.’ 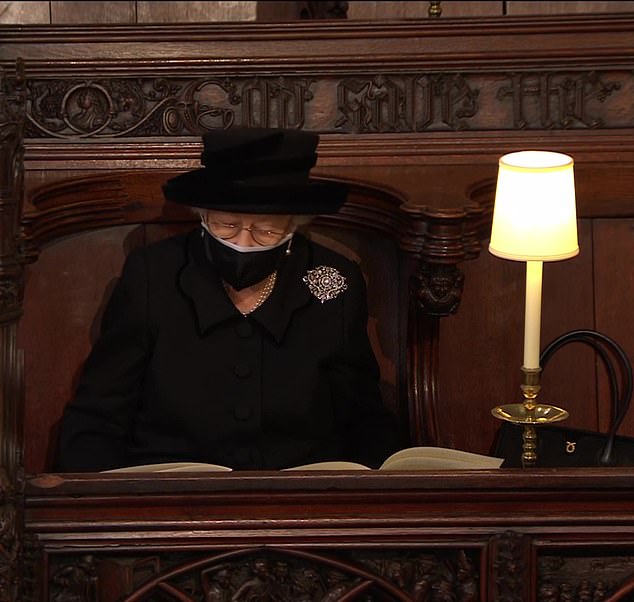 The royals’ outpouring of grief signals a shift in the monarchy’s approach to emotion, according to a royal expert. Pictured, Her Majesty looked grief-stricken and bowed her head in reverence as she said her final farewells to her husband, Prince Philip 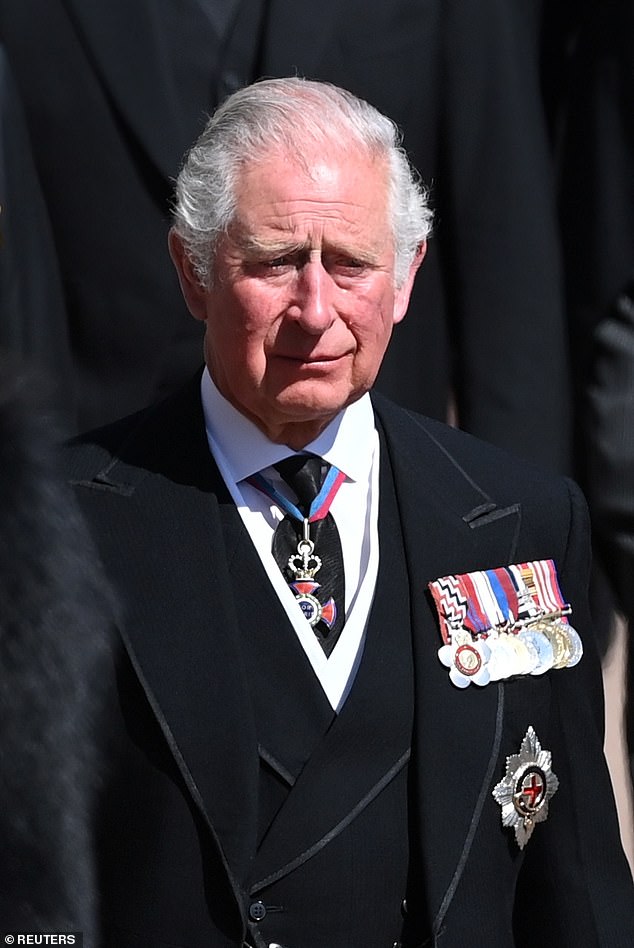 Royal author Nigel Cawthorne claimed that ‘Prince Philip himself would not countenance public displays of affection’ and said ‘it is significant that not only Charles but even the Queen appears to have broken this rule. Pictured, a tear rolls down Prince Charles’ cheek during his father Prince Philip’s funeral 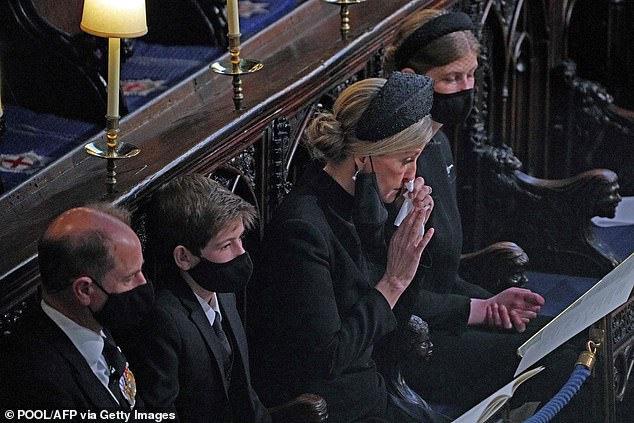 An emotional Sophie Wessex, who was joined by Prince Edward, James Viscount Severn, and Lady Louise Windsor, could be seen wiping away tears with a tissue during the service

The Prince of Wales, 72, somberly walked in procession from Windsor Castle at 2.45pm with senior members of the royal family behind Philip’s custom-built Land Rover Defender hearse, which was driven into the castle’s quadrangle before it carried his coffin through the grounds to St George’s Chapel.

A visibly emotional Charles led his siblings Princes Edward and Andrew and Princess Anne, his sons the Dukes of Cambridge and Sussex, and Peter Philips, Vice Admiral Tim Lawrence and the Earl of Snowdon.

Behind them were members of Philip’s household, and in front of the coffin were the Services chiefs.

In St George’s Chapel, the prince had tears in his eyes as he put on a black face mask before taking a seat next to his wife Camilla, Duchess of Cornwall. 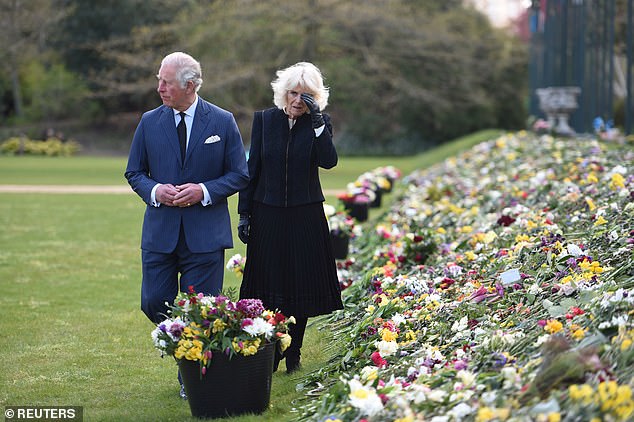 Prince Charles and Camilla visit the gardens of Marlborough House to view the flowers and messages left by members of the public outside Buckingham Palace following the death of Prince Philip in London on April 15, 2021 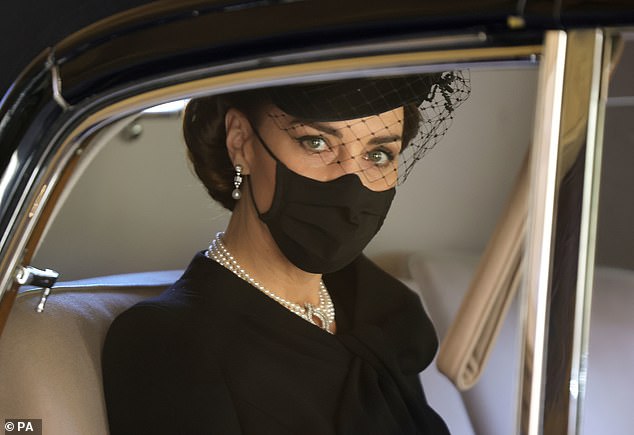 They were sat directly opposite Charles’ mother the grief-stricken Queen, who was forced to mourn alone as she bid farewell to her ‘strength and stay’.

And according to Nigel Cawthorne, the seating arrangements at the Duke of Edinburgh’s funeral gave a profound insight into royal family.

‘Sat opposite Her Majesty were the members of the family whom she would see when looking up, Charles, Edward, William and their family as well Beatrice and Eugenie,’ he explained.

‘Knowing that they would be there on her side were, significantly, Andrew and Harry.’

He continued: ‘From the age of fourteen, when Philip became the foundation stone of her life, he also was the patriarch of the family who, though blunt, bore few grudges.’ 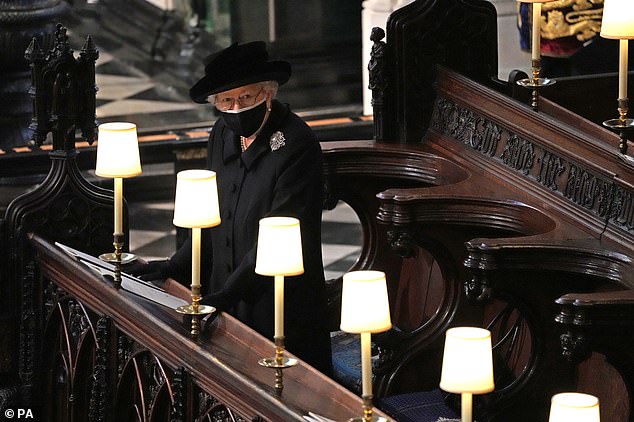 The Queen stood alone as she watched Prince Philip’s coffin being carried by soldiers on its final journey into St George’s Chapel, Windsor for the funeral of her beloved husband 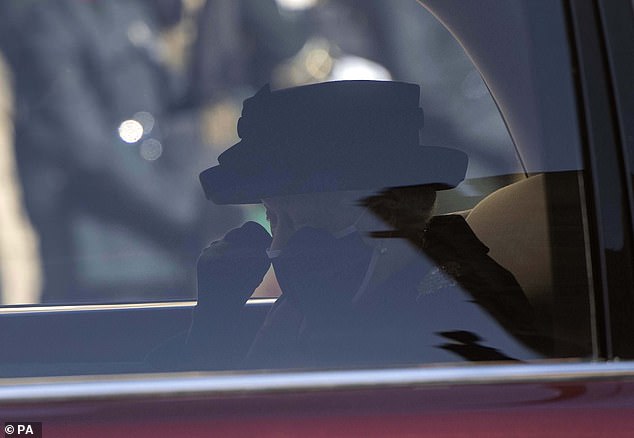 During the highly emotional service, the Countess of Wessex wiped away her tears and blew her nose on a tissue as she paid her respects to her father-in-law Prince Philip at his funeral.

Sophie, 56, who enjoys an especially close relationship with the Queen, was flanked by her children Lady Louise Windsor, 17, and James, Viscount Severn, 13, as she took her seat in St George’s Chapel, Windsor.

Meanwhile, just days earlier, an emotional Prince Charles and Camilla were in tears as they inspected thousands of tributes left to the Duke of Edinburgh who died aged 99.

The Prince of Wales and Duchess of Cornwall were moved by the sea of bouquets, cards and other items left by the Duke of Edinburgh’s mourners in the Royal Parks and at the gates of Buckingham Palace.

The royal couple paused for long periods as they looked at the piles of tributes, and looked particularly sad when they saw a toy Land Rover, his father’s favourite car, which Philip asked to be the hearse to carry his coffin at the weekend.