How your TOILET PAPER might be hurting you (and causing infections)

At the beginning of the coronavirus pandemic last year, toilet paper sales saw an 845 per cent spike in sales as panicked buyers rushed to stock up — and with remote schooling and working from home, TP sales continued to be high until earlier this year.

But according to Miki Agrawal, the Canadian founder of Thinx period underwear and the bidet company Tushy, people should really be cutting down on their toilet paper use altogether.

Agrawal notes that toilet paper use can actually be detrimental to one’s health, and can lead to bacteria buildup, irritation, hemorrhoids, and infections like UTIs and bacterial vaginosis.

As the founder of a bidet company, Agrawal has some stake in the game — but is quick to point out that even briefly thinking about the job that toilet paper does exposes how inadequate it really is.

‘We always ask people — if you got poop on your hands or arm, would you wipe it with dry paper or would you wash it with water? Ninety-nine per cent of people will say they wash it with water. The other 1% are usually pathological contrarians who can’t help themselves,’ she says. 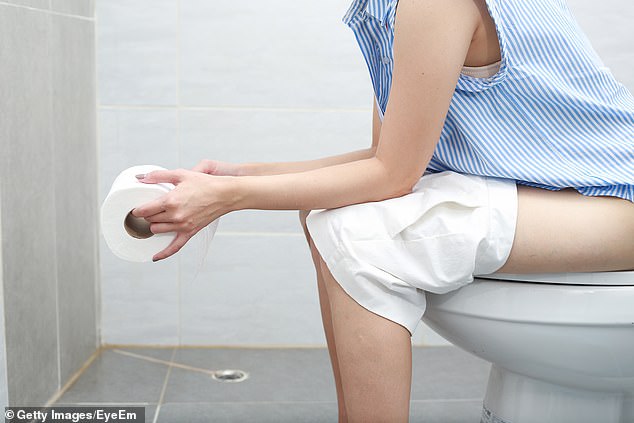 ‘Imagine jumping in your shower, NOT turning the water on, and just using dry toilet paper to wipe down your dirtiest bits? People would think you’re crazy… so why are we doing that to the dirtiest part of our body — our butt?’ she adds.

While toilet paper companies tend to promote the softness of their products, Agrawal insists that ‘softness isn’t the first thing you should be thinking about when removing the most concentrated source of filth and illness-causing bacteria there is’ — but rather, it should be cleanliness.

But beyond the ick factor of of walking around with an inadequately cleaned bottom, Agrawal says that there are plenty of health issues that toilet paper can directly contribute to.

‘Excessive wiping’ can lead to irritation, which can mean several uncomfortable symptoms, including redness, open sores, swelling, sensitivity, and itchiness.

Curtis Asbury, MD, a dermatologist in Selbyville, Delaware, told Mental Floss that a common diagnosis for this is perianal dermatitis, which is a topical irritation that can be caused by a range of bad wiping techniques, including poor, infrequent, or overzealous wiping.

This can be especially true for people who use coarser toilet paper, whether of the budget or environmentally friendly varieties — but also for some softer kinds, as perfumes and some coloring agents can be irritable to people with sensitive skin.

Irritation can also be caused by bits of toilet paper that stick to the skin after wiping.

But while that irritation is uncomfortable enough on its own, the tiny micro-cuts that it can create can contribute to even worse problems, allowing feces and bacteria inside the skin.

‘Feces is made up of bacteria and moisture and if not properly cleaned, this can lead to chronic infection around the skin of your anus,’ Agrawal explains. ‘This irritation can lead to itching, sores, and broken skin, which can then become infected because the area is unclean.’

While some people turn to wet wipes for easier cleaning, they can actually do more harm them good, since they can mess with the good bacterias down below and cause a whole different set of problems. 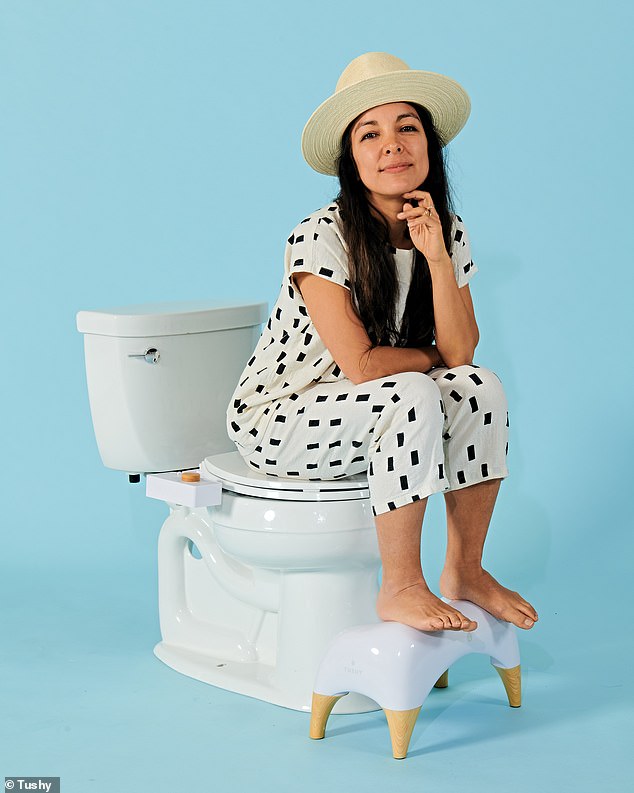 Super clean! Miki Agrawal, the founder of the bidet company Tushy (pictured), says that using a bidet is more hygienic, and ultimately better for one’s health

For women, not getting adequately clean after a bowel movement can cause even more health issues.

‘If you are not properly cleaning your butt, fecal bacteria can travel to and infect the urinary tract and cause UTIs and bacterial vaginosis,’ says Agrawal.

‘Wiping is not only inefficient but it can sometimes spread that bacteria if people aren’t careful.’

So what is there to do? Agrawal says that using bidets can help solve all these problems, since they’re like a ‘personal shower for your butthole’ — and can dramatically cut down on the need for toilet paper.

While in some European countries, bathrooms have entirely separate bidet fixtures, newer inventions like the Tushy attach to the toilet and use the same water supply as the sink (not the tank or the bowl) for personal cleaning.