‘Just another day in Australia’: HUGE octopus with 30cm long tentacles is seen pulling itself along a popular Byron beach

A giant octopus has joined the long list of Hollywood celebrities and social influencers flocking to the ultra-glamorous beachside hamlet of Byron Bay.

The eight-legged ocean dweller was captured on camera sliding across the sands of Wategos Beach, as shocked onlookers watched on startled and mesmorised by its changing colours.

Sydney resident Jarrah Brailey filmed the creature, with tentacles around 30cm long, casually making its way towards nearby rocks. 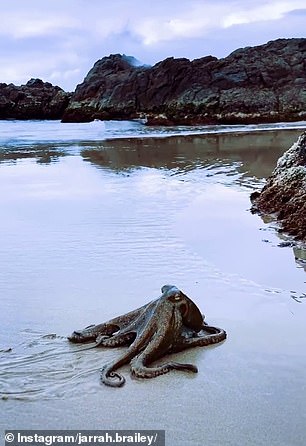 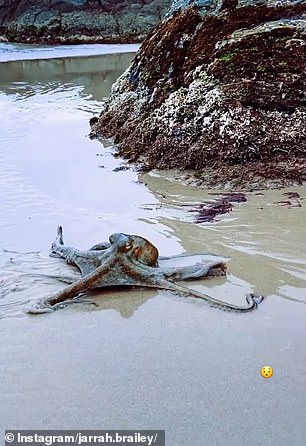 A giant octopus was captured on camera sliding across the sands of Wategos Beach, as shocked onlookers watched on startled and mesmerised by its changing colours

‘It was so crazy, I couldn’t believe it,’ Ms Brailey told Daily Mail Australia.

She said it was changing colour depending on whether it was underwater, on the sand or on the rocks.

Octopuses are able to camouflage their colour as a way to protect themselves from predators, but few people get to see it up close.

The creatures normally like to stay in deep water and are rarely seen cruising the beach.

‘It was super cool!’ she said.

‘But I didn’t realise how rare it was to see one so big up close, until I was inundated with messages from friends from places like New Zealand and the UK.’

She it was just ‘another day’ in Australia.