Hundreds of boy racers ignored Covid restrictions last night to gather for a car meet  near Nottingham, while Essex police shut down a rally with 450 motors.

Photos show hundreds of car enthusiasts lining the streets under a bridge of the A453 near Ratcliffe-on-Soar Power Station and East Midlands Parkway station, in Nottingham, on Sunday evening.

Modified cars paraded up and down the blocked streets during the illegal event which had reportedly been advertised via the social media group UK Car Scene.

The event was originally supposed to take place in Mansfield, Nottinghamshire, but was quickly shut down by police.

Revellers then moved to an industrial estate in Bulwell, near Nottingham, where police reportedly watched on as hundreds gathered outside of their cars. 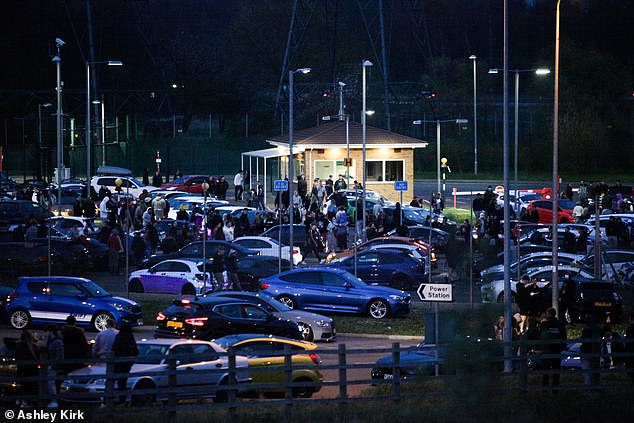 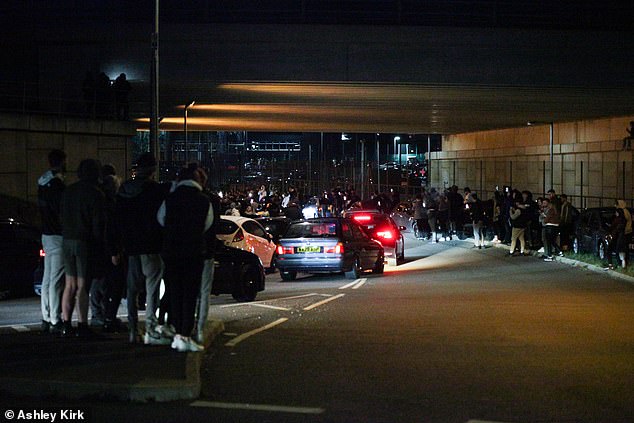 Modified cars paraded and celebrated during the illegal event which had reportedly been organised via social media group UK Car Scene. 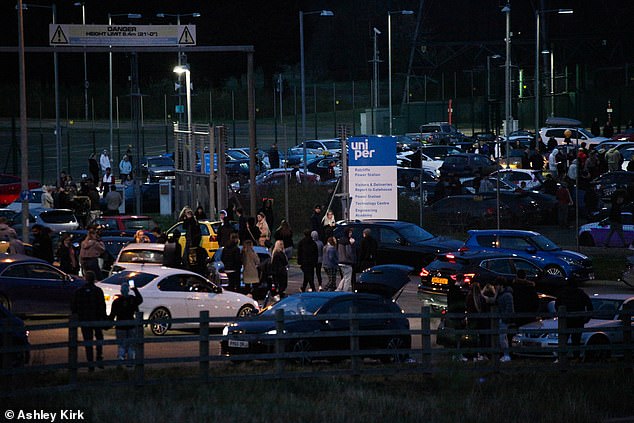 ‘Apparently it was attended by people from across the country and was organised by a car event website.’

Meanwhile in Essex police put the brakes on a huge car rally after more than 450 motors arrived for an illegal meet last night.

Tipped off that hundreds of cruising enthusiasts would be on a 25-mile drive from Chelmsford to Thurrock in Essex officers moved in to make one arrest and handed out fines to 22 others.

A second bid later to regroup was also disrupted and fines issued for offences including speeding and careless driving. Some were given formal warnings that if they tried to do the same thing again, their cars would be seized. 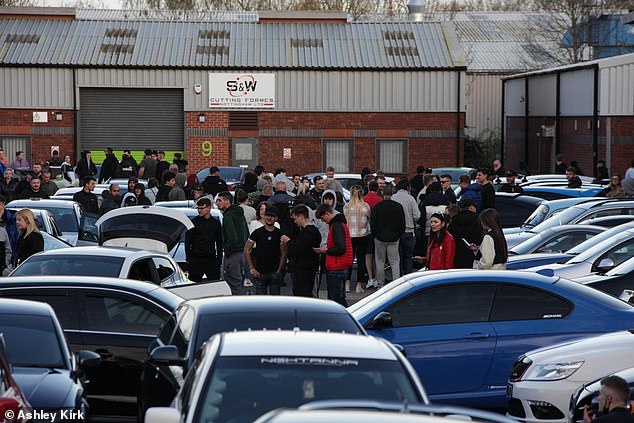 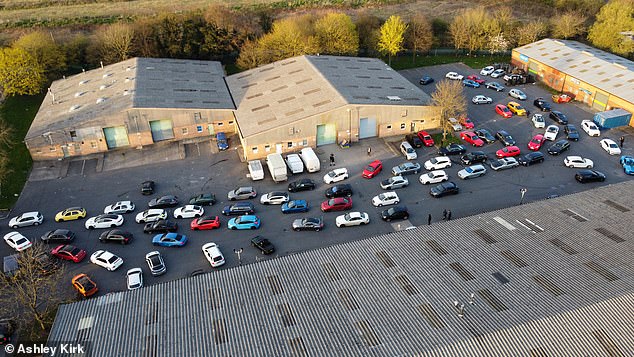 Revellers moved to an industrial estate in Bulwell, near Nottingham, where police reportedly watched on as hundreds gathered outside of their cars 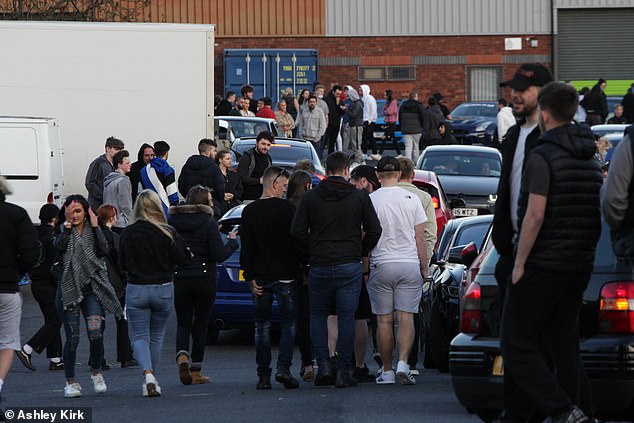 Chief Inspector Richard Melton, District Commander for Thurrock, said: ‘We acted quickly to deal with this challenging situation which involved a meet consisting of a very large number of vehicles.

‘These events do pose a danger to the public as there is often an element who will be driving anti-socially and dangerously.

‘Only a few years ago a young woman had to have part of her leg amputated after being hit by a motorbike and an illegal meet.

‘Our roads policing teams continue to work to tackle street racing, dangerous driving, and anti-social driving because we know the risk it poses and the harm it can cause. 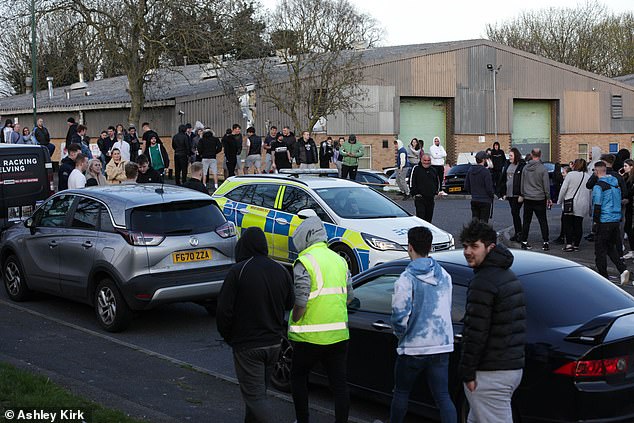 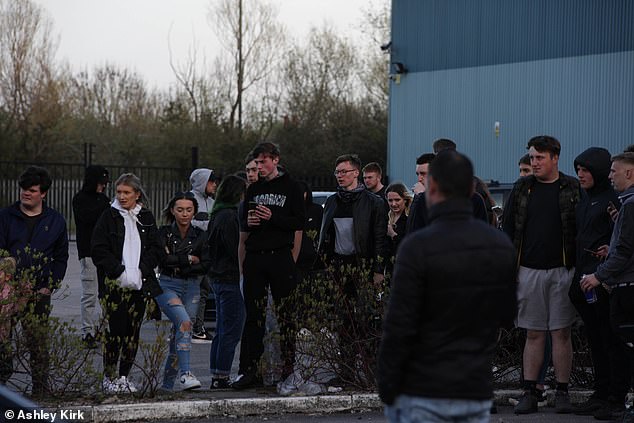 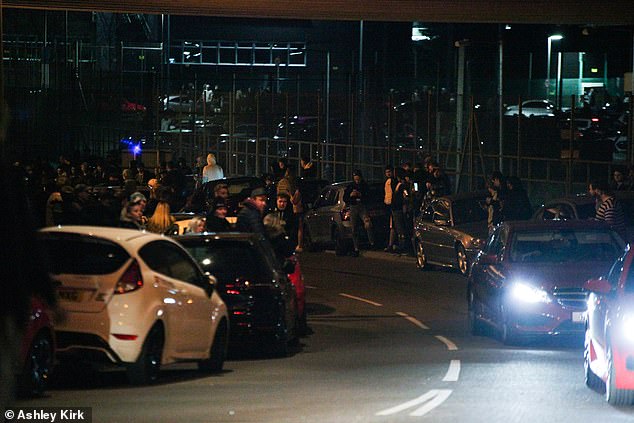 As night fell the group gathered under a bridge of the A453 near Ratcliffe Power and East Midlands Parkway station, in Nottingham

‘The sheer number of vehicles involved posted a challenge to our officers but we had additional resources available to deal with it and were able to do so without anyone being injured.

‘An organised meet like this is also a clear and blatant breach of the Government’s Covid-19 regulations.

Chief Insp Melton said police would continue to work with partners to make this kind of activity more difficult to carry out.

He said: ‘On this occasion Thurrock Council put additional measures in place, such as a public space protection order which gave us increased powers to deal and disperse these events. 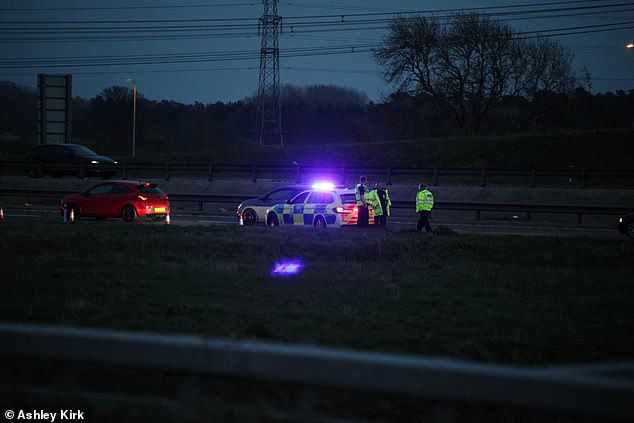 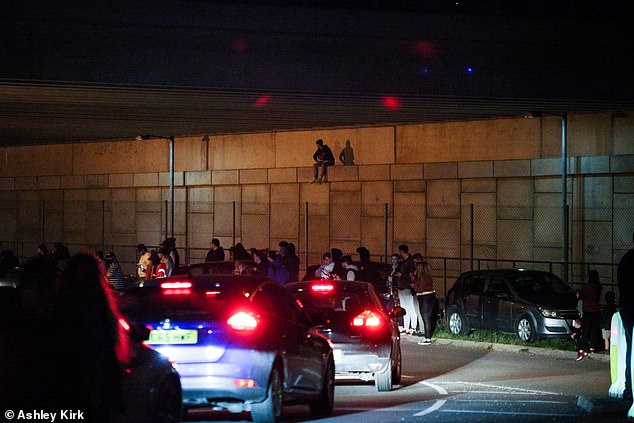 An individual sits on a wall under the A453 near Ratcliffe Power and East Midlands Parkway station, in Nottingham

‘We will continue to work with them to keep our roads and our communities safe.’

The enthusiasts – often in modified hatchbacks – are known to spend thousands of pounds on customising their cars with special paint jobs and highly-tuned engines.

There are legal organised car shows but many young drivers like to show-off by potentially-dangerous stunt driving.

They often choose places like industrial estates which are empty at weekends and at night to stage dangerous stunts and races or compete against the clock.

Social media is increasingly used to alert car owners of up-coming organised events – but police also monitor websites known to encourage enthusiasts to meet up for a ‘run’.

Earlier this year police shut down another illegal car meet on the Essex-London border and handed out 50 fines for breaching lock-down rules.

In January Met police officers broke up a meeting in Ferry Lane, Romford. They had been called just before midnight and discovered the group speeding around a roundabout – carrying out ‘drifting’ in which a car is flicked sideways in a controlled skid.

Chief Superintendent Stephen Clayman said: ‘It is unacceptable that people are still breaking the rules at a time when there is so much pressure on the NHS. It is more important than ever before that people follow the regulations.

‘The restrictions are clear enough and there is no excuse for this sort of selfish behaviour that puts lives at risk and causes a nuisance for nearby residents who are doing the right thing by staying at home.

‘We understand that this is a very difficult time for everyone but our top priority as police officers is keeping people safe. If that means moving quicker to enforcement action for more wilful breaches, then we will do.’