The husband of a woman found dead with her two children in their home yesterday had been due in court today on charges of seriously assaulting her.

Gardaí believe the bodies of the 37-year-old woman and her 11-year-old daughter and six-year-old son may have lain in the south Dublin house for days before being discovered.

A legal source familiar with the case said gardaí believe today’s scheduled court appearance may have been the ‘catalyst’ that led to the gruesome killings.

A man handed himself in at a garda station yesterday afternoon after a frantic search was carried out for a number of hours.

Gardaí had found the three bodies less than 24 hours before the suspect was due in court for assault causing harm at the family home.

Gardai and foreensics at the scene in the Llewellyn estate in Ballinteer, south Dublin, on Wednesday evening following the discovery of bodies of a woman and two young children 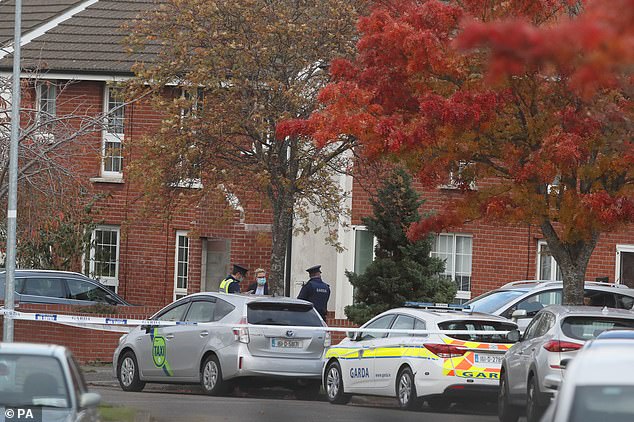 Gardai are pictured at the house in Ballinteer, south Dublin. Officers are said to have broken into the property after becoming concerned about the welfare of the people inside 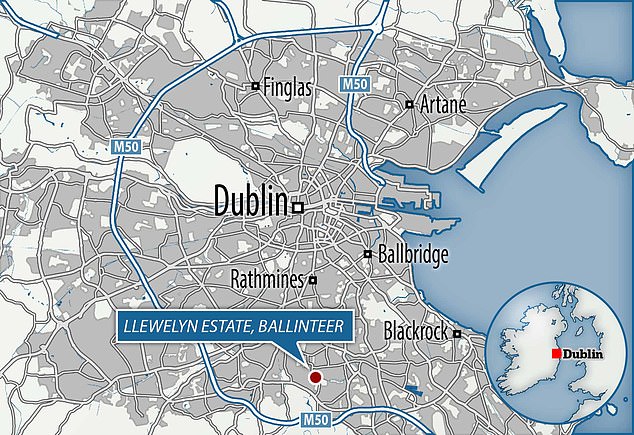 Gardaí had been called to house, at Llewellyn Court, Rathfarnham, earlier this year, after the man allegedly beat the woman in a serious disturbance. He was arrested at the time and was due in court today so that the judge could check the status of the proceedings.

The case was listed for full court hearing on April 22 next, when the man was expected to answer the charge, which carries a maximum sentence of five years in prison.

The family’s close neighbour, who drove the children to school every week, said he felt they had been let down by the system. Concerned neighbours contacted the gardaí after the woman, and her two children had not been seen in several days and their attempts to contact her failed.

After the horrific murder-suicide in Kanturk, Co. Cork, on Monday, yesterday saw another community, this time in Rathfarnham, south Dublin, try to deal with such troubling events. 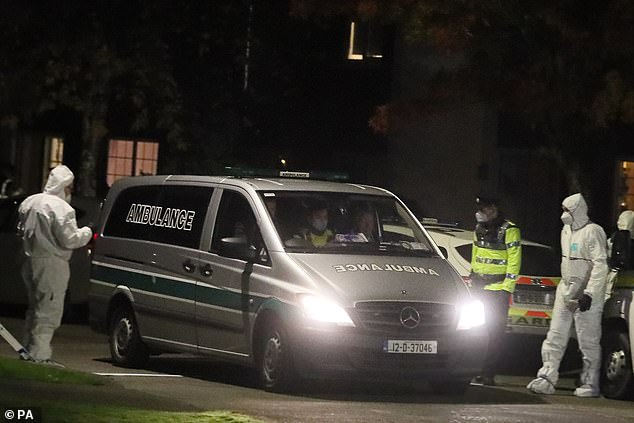 A private ambulance leaving the scene in the Llewellyn estate in Ballinteer, south Dublin, following the discovery of bodies of a woman and two young children. Gardaí had been called to house, at Llewellyn Court, Rathfarnham, earlier this year, after the man allegedly beat the woman in a serious disturbance

This too happened in a quiet area, a residential estate. A neighbour told the Irish Daily Mail his children had been going to the same school as the tragic family, who were Indian, and he used to give them a lift every day.

He thought the family, who are also Muslim, had been let down by the system and said: ‘Well, if you know the real stories, it’s just the system.

‘I knew them quite well and the kids went to the same school so we used to give them a lift to school every day.’

Asked how his children felt about what had happened, he said: ‘It’s just awful, there is no system in place. The police know there are kids next door so how do you deal with those kids. 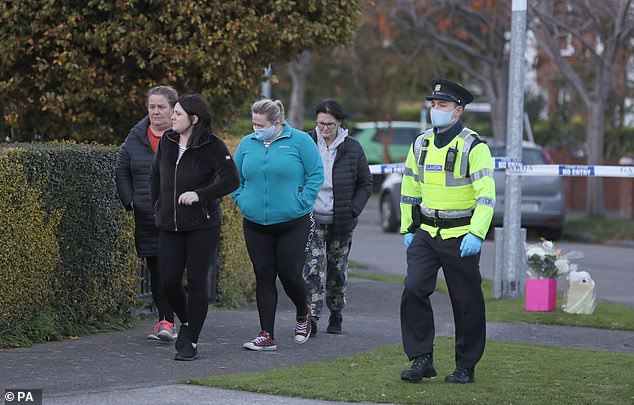 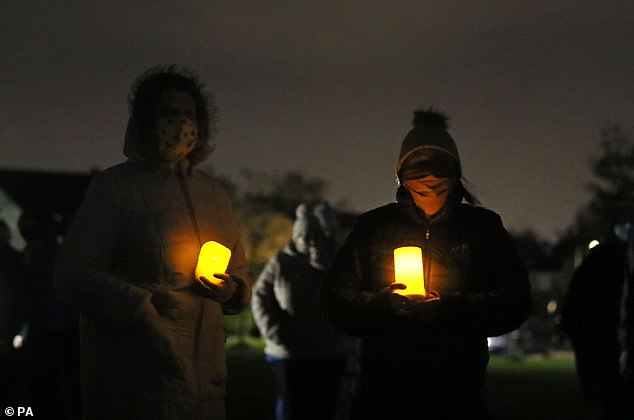 People at a candlelit vigil in the Llewellyn estate in Ballinteer, south Dublin, following the discovery of bodies of a woman and two young children

‘They knew there were kids but there has been nothing at all for them. It’s terrible.

‘Something terrible has happened and there are kids on the estate so there has to be some level of care.’

No other person was found inside the Dublin property, which the family had occupied since this January.

The children were found in a bedroom and that the woman’s remains were also discovered upstairs in the property.

Gardaí were called to the house just before midday yesterday and members of the Armed Support Unit forced their way into the house and found the bodies.

Superintendent Paul Reidy of Blackrock Garda Station said a postmortem is due to be carried out on the three victims. Gardaí have also appealed for members of the public not to circulate comments about the case on social media platforms, describing them as uninformed and unhelpful to the investigation.

They are also talking to friends and family of the woman and children as part of their inquiries. Family and friends from around Europe called loved ones in the Llewyn estate as news of the horrific tragedy unfolded yesterday afternoon.

One girl, 12-year-old Leyla Hemp, said her aunt, who lives in Spain, heard about the tragedy and called the family immediately.

‘She rang my sister and said: ‘Is everything OK?’ because she couldn’t get through to my mum or dad and she [told] my sister about what had happened to the 11-year-old and the six-year-old.

‘I’m about to leave now to see my friends but I had to wait a bit because I didn’t want to come out while all the gardaí were there and I didn’t want to pass the house or anything. It’s a really nice area and very little happens.’

Another Polish woman, who lives nearby, said that her husband called from Poland when he heard the news and wanted to ‘make sure me and the children were alright here. We are fine, we don’t know this woman, there are many rented houses here,’ she said.

In the park at the centre of Llewellyn Way, which overlooks the entrance to Llewellyn Court, Seán Gentleman was kicking a football with his friend.

‘We heard on the one o’clock news about it and we could see Garda cars coming in and out. Nothing like that ever happens here. It’s a very quiet area, there is very little crime,’ he said.

Adults were grappling with how to protect children from the horror of what happened.

One family, dressed in Halloween costumes, came out from a house just a few doors down from where the bodies were found. As they made their way past the Garda cordon, one little boy asked a neighbour what happened. 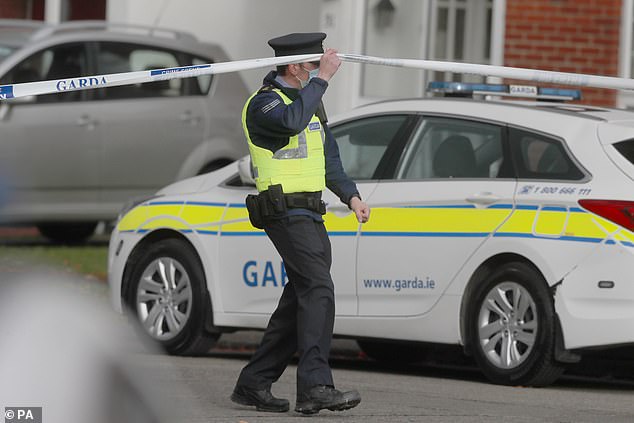 Gardai at a house in Llewellyn estate in Ballinteer, south Dublin, following the discovery of bodies of a woman and two young children

‘There’s been an accident’ she said. ‘A car accident?’ he asked. ‘Yes,’ she said. ‘Oh, I heard it was a robber who came into the house,’ he replied.

The woman said: ‘I always said that I was concerned about the effect the lockdown would have on mental health.’

Like everyone else living in Llewellyn Court, she had to park her car outside the Garda perimeter and walk to her house because gardaí feared that cars might destroy possible forensic evidence left on the street.

At about 3pm, a van from the Garda technical bureau arrived at the estate. A plain clothes garda who was checking for evidence in the wider Llewellyn estate, could be seen running to get a lift from an unmarked Garda car leaving Llewellyn Court.

At the modern, red-bricked house where the bodies were found, groups of uniformed and plain clothes gardaí could be seen coming in and out all afternoon.

The house has a distinctive lamp hanging on the outside, and another in the porch, but unlike many of the houses in the estate, it had no Halloween decorations.

One man walking his dog said that Llewellyn Court is just inside the Rathfarnham border, a river that runs at the back of it is the dividing line with Ballinteer, which comes under a different Garda jurisdiction.

He said he believed he knew the woman and her children from walking to Centra. ‘They take a short-cut up through the Grange Wood estate where I live. I didn’t know them personally, I would probably know her to see, but it’s hard to know, there would be quite a few houses rented here too,’ he said.