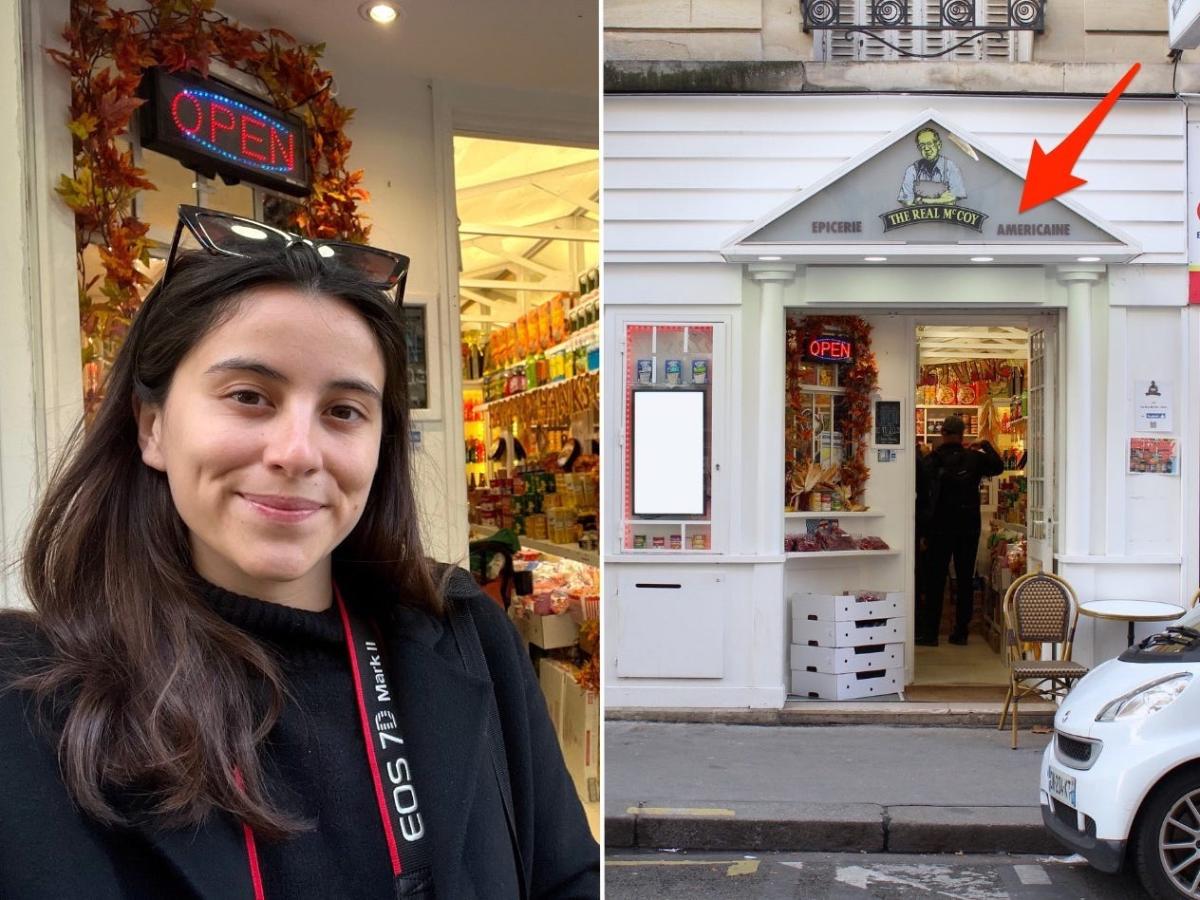 For the first time ever, I spent Thanksgiving in Paris, France without my family.

I’m half-American and half-Dutch but live in the UK. Even though I lived in the US for four years, my family and I always loved celebrating Thanksgiving together at our home in London.

This year is a little different because I went to Paris, France – alone. But given that over 100,000 Americans likely live in the city, I was curious to see if there was an American food store around and whether it would be catering to ex-pats looking for a taste of home on the holidays.

Enter The Real McCoy in Paris – its Instagram bio describes it as an “Authentic American grocery store” open since 1990.

The Real McCoy isn’t far from the Eiffel Tower, which happened to be close to where I stayed in Paris.

I came to Paris to attend Le Bal des Débutantes, a world-renowned debutante ball that happens annually in the city at the Shangri La Hotel. I’ve been to Paris a handful of times and on this trip, stayed close to one of its most well-known attractions: the Eiffel Tower.

Luckily for me, The Real McCoy was less than a 20-minute walk from the tower, so after doing a bit of sightseeing I headed over on foot to check it out.

When I arrived, subtle US flag decorations outside of the store and in the window indicated I was in the right spot.

The exterior of the American grocery store was also decorated with autumn leaves and bushels of corn, which showed there were Thanksgiving-themed products for sale inside.

There were also bags of cranberries on display that were being sold for 7.5 euros, around the same price in dollars.

The shop was tiny and packed with American customers collecting last-minute treats for Thanksgiving.

There must’ve only been five people in the store maximum but it was so small that it felt crowded. Given it was Thursday, employees were busy trying to take everyone’s Thanksgiving orders.

Later I saw on the store’s Instagram that it was advertising pre-orders of all the usual Thanksgiving fixings, including a six-eight person turkey for 60 euros ($62) and pumpkin pie for 30 euros ($31).

According to Walmart’s Butterball Turkey prices, a similar-sized turkey costs $26.56 in the US, so the shop’s products appeared more expensive.

This wasn’t too shocking for me though – I’ve visited an American food store in London where a bottle of Tide detergent was priced at $61 in January.

A festive Thanksgiving banner was hung inside.

The festive decorations definitely did not stop at the door.

Besides the “Happy Thanksgiving” banner that spanned the width of the shop, more festive autumn decorative leaves were placed among the food products inside.

No American food store outside of the US would be complete without a selection of candies.

American snacks were lined up wall-to-wall throughout the entire store. But, of course, there were plenty of sweet treats for sale.

As soon as I entered, on the right-hand side, I saw a massive selection of Candy Corn, which cost 4.5 euros, Hershey’s Kisses, which cost 6.5 euros, and Nerds, which cost 3.5 euros for sale. Each item was similarly priced in dollars.

But there were also a ton of savory items on display.

From cream corn and salsa to Takis and Goldfish, there was more than just American candy on sale at The Real McCoy.

However, I noticed there weren’t any US-branded non-food items, such as cleaning supplies, which are available to buy at the American Food Store in London, UK.

One item I spotted that seemed slightly overpriced was the Campbell’s Cream of Mushroom canned soup, which cost $6.

According to Walmart, the exact same size of Campbell’s cream of mushroom canned soup costs just $1.26 in the US.

Meanwhile, at The Real McCoy in Paris, it’s priced at 6 euros, roughly the same amount in dollars.

According to data from France’s National Institute of Statistics and Economic Studies shared by Trading Economics, importation costs in France have steadily risen in 2022. This likely explains why the canned soup and several other products in the store were much more expensive than if they were sold in the US.

But overall, the sheer variety of snacks at the shop was impressive.

For such a small space, I was in awe of the hundreds of snacks, candy, and other savory items on display. The entire shop was basically stocked with food from wall to wall.

The Real McCoy was ready to serve customers during the festive season.

Items like stuffing, bread crumbs, and canned sweet potato caught my eye and made me nostalgic for a traditional US Thanksgiving meal.

It’s no wonder expats in Paris were showing up at the American grocery shop for a taste of home.

Since there weren’t any fresh produce or cleaning supplies at the store, it probably wouldn’t be where I would do any weekly shops.

But if I were living in Paris full-time and I was here during the holidays, I could see myself stopping by The Real McCoy during the festive season.

Read the original article on Insider