‘I worked so hard for it’: Jill Biden hits back at critics of her doctorate and ‘tone’ of WSJ column

Jill Biden has hit out at critics of her doctorate which she ‘worked so hard for’ and condemned the ‘tone’ of the Wall Street Journal article which panned her.

The 69-year-old told Stephen Colbert she was ‘surprised’ by the opinion piece in an interview alongside president-elect Joe Biden.

Colbert asked: ‘You once said in your memoir the role I have always felt most at home in is Dr Biden. Some people have recently taken it upon themselves to question that title. Do you have any reaction?’

‘Yeah that was such a surprise,’ Biden replied. ‘And it was really the tone of it that I think – you know he called me kiddo.’ 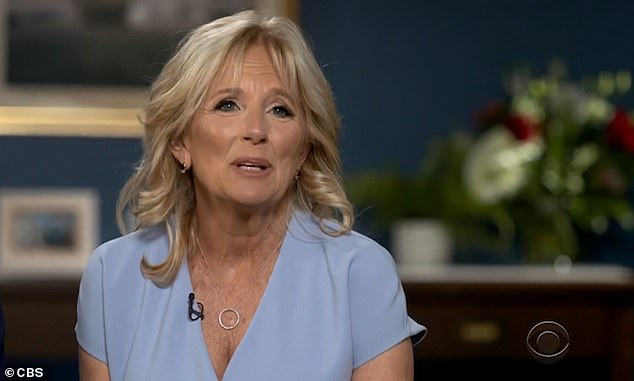 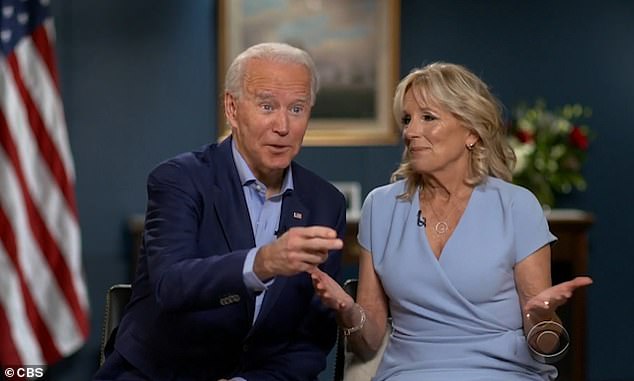 Cutting across his wife, Biden said: ‘I got to hand her doctorate on the stage University of Delaware, she had to masters degrees she kept going to school all the time while teaching at night, and then what happened was I said Jill why don’t you get a doctorate and make us some real money. She gets the doctorate and gets a $2,000 raise.’

Biden was referring to a WSJ column titled: ‘Is There a Doctor in the White House? Not if You Need an M.D.’

Joseph Epstein opened the piece: ‘Madame First Lady—Mrs. Biden—Jill—kiddo: a bit of advice on what may seem like a small but I think is a not unimportant matter. Any chance you might drop the ‘Dr.’ before your name? ‘Dr. Jill Biden ‘ sounds and feels fraudulent, not to say a touch comic.’

But she told Colbert: ‘One of the things I’m most proud of is my doctorate. I mean I worked so hard for it.’

Reminiscing fondly, Biden described how her husband came with her when she defended her thesis at the University of Delaware.

Cutting across his wife, Joe Biden said: ‘I got to hand her her doctorate on the stage University of Delaware, she had two masters degrees, she kept going to school all the time while teaching at night, and then what happened was I said Jill why don’t you get a doctorate and make us some real money.

Many have rushed to her defense since the WSJ opinion piece, including the former First Lady Michelle Obama who said it was patronizing and sexist. 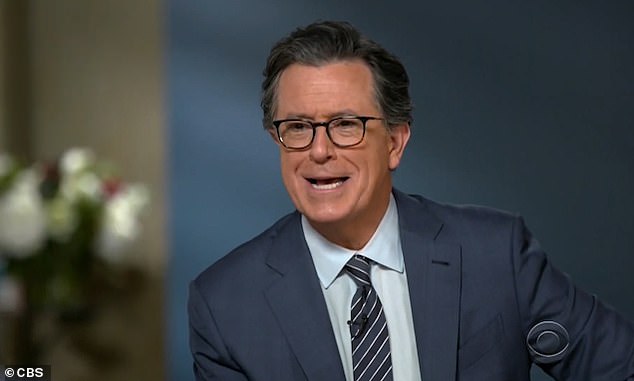 Colbert chipped in and said he was also very surprised that people had been irritated by her using the Dr. title 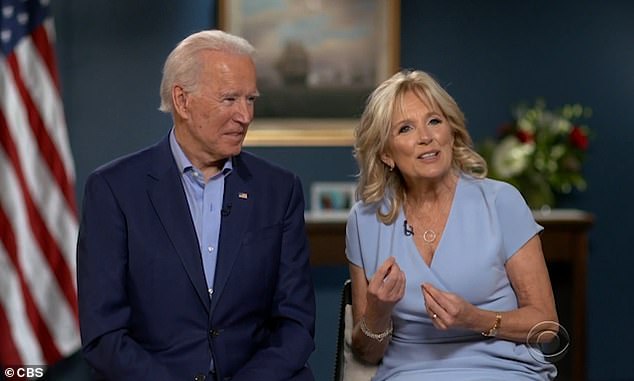 Biden was full of praise for his wife, saying that he had to ‘suppress his Irishness’ when faced with her critics

Obama wrote on Instagram: ‘For eight years, I saw Dr. Jill Biden do what a lot of professional women do – successfully manage more than one responsibility at a time, from her teaching duties to her official obligations in the White House to her roles as a mother, wife, and friend.

‘And right now, we’re all seeing what also happens to so many professional women, whether their titles are Dr., Ms., Mrs., or even First Lady: All too often, our accomplishments are met with skepticism, even derision.

‘After decades of work, we’re forced to prove ourselves all over again.’ 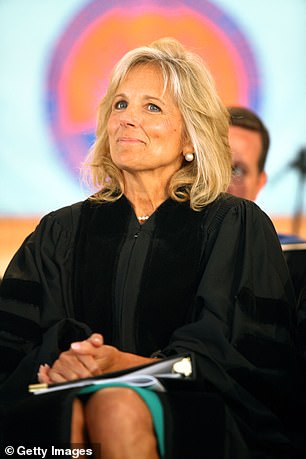 Biden’s critics say it is unconventional to invite people to call you doctor if you hold a Ed.D because this is ordinarily reserved for medical doctors – although its use might be more liberal in academic settings.

Fox News anchor Tucker Carlson agreed with Epstein, saying that Biden was ‘a doctor of education, which means basically nothing.’

‘Jill Biden is not a doctor, no. Maybe in the same sense Dr Pepper is,’ Carlson added.

Cosby, serving a three to ten year sentence for sexual assault, obtained a doctorate in education from the University of Massachusetts Amherst in 1976.

Carlson pointed out that, in 2009, Jill Biden said she wanted to get a PhD because she was tired of letters to ‘Senator and Mrs Biden’.

He accused her of having ‘status anxiety,’ saying she ‘decided to cure that, as so many do in our country, with another pointless title’.

However, many have suggested that the argument has only been mounted because Biden is a woman.

Doug Emhoff, husband of Vice President-elect Kamala Harris and the country’s first ever second husband, noted, ‘This article would never have been written about a man.’

And Hillary Clinton, both a former first lady and former secretary of state, simply tweeted: ‘Her name is Dr. Jill Biden. Get used to it.’