IAN LADYMAN: Mohamed Salah was fouled to win his penalty against West Ham… but then he dived

Graeme Souness was right to say on Sky that Mo Salah dived in winning a penalty for Liverpool against West Ham. But he was wrong to suggest a foul had not been committed.

West Ham defender Arthur Masuaku hacked at Salah’s leg, which is not permitted.

Referee Kevin Friend would have been within his rights to award a penalty and then book Salah for exaggerating his fall. There is no reason at all why that cannot happen. 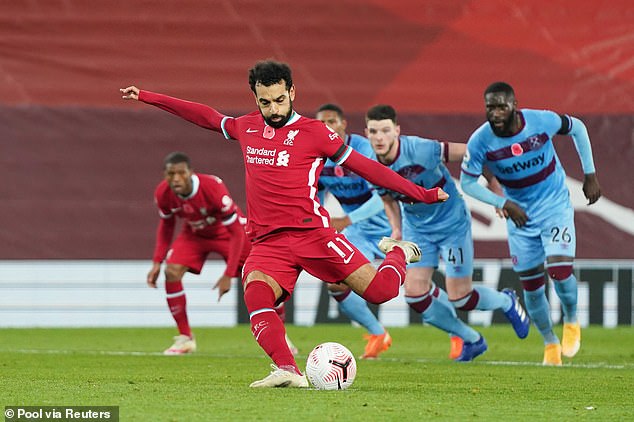 Players are often fouled and then dive to make sure the referee is in no doubt. It is still a form of cheating and should be punished.

Salah has form. He does dive. Anyone who can’t see that isn’t looking properly and he has other flaws, too. He can be horribly greedy, for example.

One of the benefits of doing this job is seats from where you see the pattern of play developing early.

At Burnley last season it all spilled over when he ignored Sadio Mane. Mane — no doubt fed up of a recurring pattern — lost the plot a little, ranting at Salah with such energy that he was soon substituted. 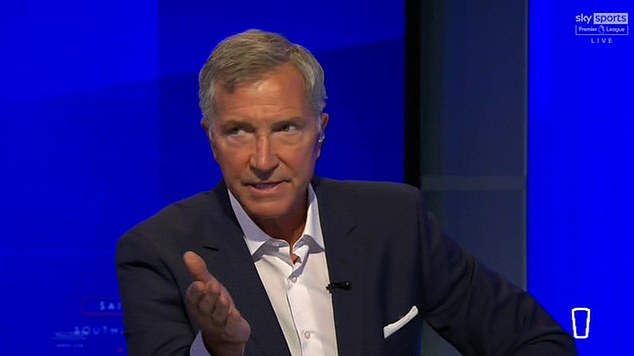 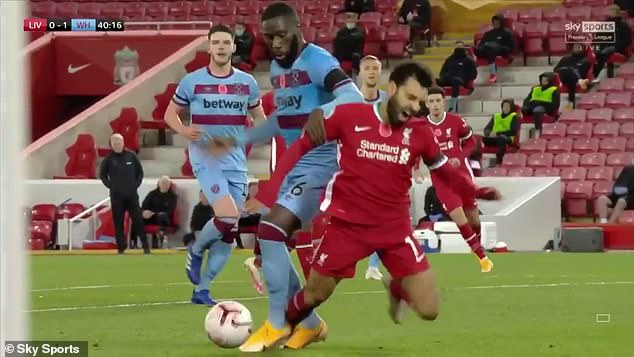 Liverpool won 3-0 but the issue lingered a little. Salah was eventually called to Jurgen Klopp’s office to discuss it, only to reveal to his manager that he and Mane had already moved on.

So Salah must occasionally be as troublesome to play with as he is to play against but the bottom line is that the Egyptian is worth it simply because the really great players usually are. At Manchester United Cristiano Ronaldo is spoken of fondly. He also dived. And he was also was greedy, too. Maddeningly so.

Senior players at Old Trafford used to complain to Sir Alex Ferguson about it but speak to them now and they won’t mention it.

Two of the most team-orientated players of Ronaldo’s time are Roy Keane and Gary Neville but they will talk only of his drive, his work ethic and of course the number of trophies (eight) he helped them win. In European competitions, Ferguson played Ronaldo up front as he knew he wouldn’t work hard enough when United didn’t have the ball. 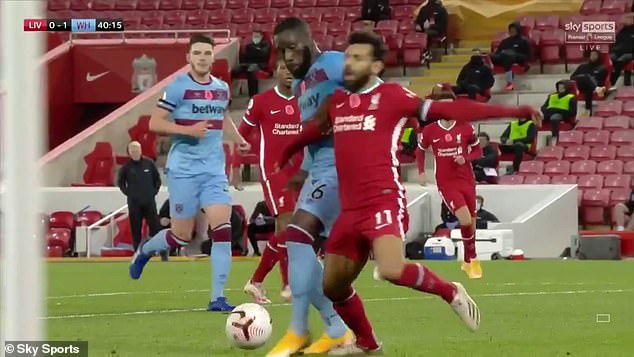 Replays showed Masuaku made contact with Salah’s leg, although his fall has been criticised

Wayne Rooney had to fill in on the left of midfield. We can imagine how Rooney felt about that. But in 2008 United won the Champions League and Ronaldo scored in the final. Conversation over.

And this is where we are with Salah now. He is as irreplaceable at Liverpool as any player has perhaps ever been. When Kevin Keegan left in 1977, Liverpool bought Kenny Dalglish.

If Salah leaves, who do Liverpool buy? It is not an easy question to answer. Of Liverpool’s 17 Premier League goals this season, Salah has already scored seven.

Referees should probably be wiser to his propensity to fall to ground. He is known for it and it is not always that difficult to spot, especially now that VAR is an option.

But it is the devil in Salah that is so important to what he does. Nobody will make excuses for cheating. Officials should be on to it. Nevertheless, players like him will always push the limits of what they can get away with until somebody tells them otherwise. It’s unlikely to be a conversation Klopp has with him any time soon. 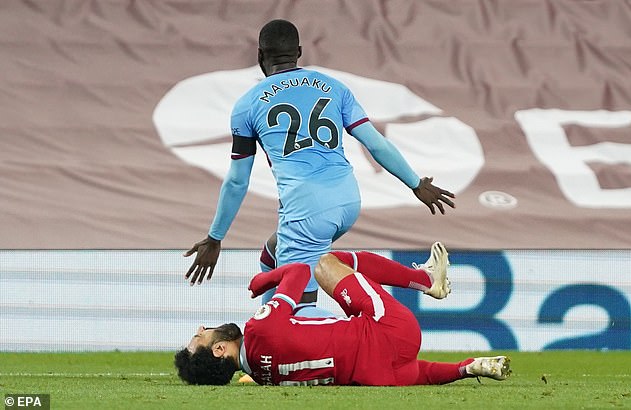 Wayne Rooney is generally accepted to be the next Derby County manager but just one question.

With Derby now in the bottom three of the Championship, would he be wise to take the job?

Modest Nobby and a legacy from ’66

After the 1966 World Cup final the England team travelled back to the Royal Garden Hotel in Kensington for a celebratory dinner with their wives. On arriving they were informed their wives were not invited. The players would be dining with the vanquished German team instead.

It is hard to imagine someone like Nobby Stiles appreciating that very much.

Stiles had been one of the stars of the show that day on Wembley’s heavy pitch but would not have appreciated the opportunity to rub the German noses in it over dinner. It was simply not his way.

From the tributes paid to Stiles following his passing on Friday has emerged a theme of modesty and level-headedness.

And although that story of a stilted breaking of bread with the Germans speaks very much of different times, Stiles and others from Sir Alf Ramsey’s great team leave behind a humble legacy that remains ever more important in these strange times. 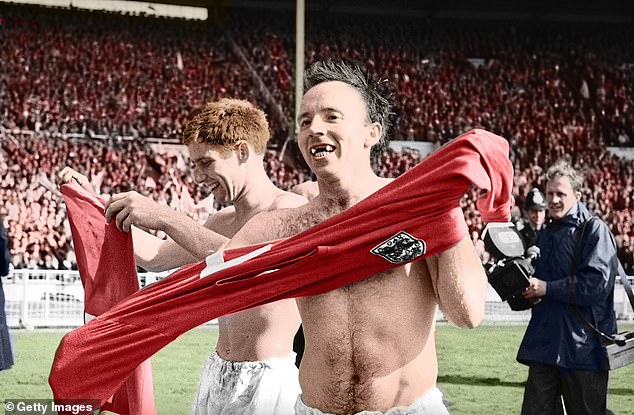 Dele Alli has knocked on Jose Mourinho’s door on more than one occasion to underline just how desperate he is to get back in to the Spurs team. Mourinho has been impressed by the depth of Alli’s desire.

The problem is that when he gets the chance to make his case on the field, Alli tends to fluff his lines.

Mourinho’s decision to pick him in a below-strength side for an unexciting away Europa League tie at Antwerp felt a little bit like a trap.

If it was, Alli fell right in to it with a performance bad enough to see him hooked at half-time.

The Spurs midfielder is still only 24 but his career is trending downwards. It increasingly feels as though only a change of club will save him. 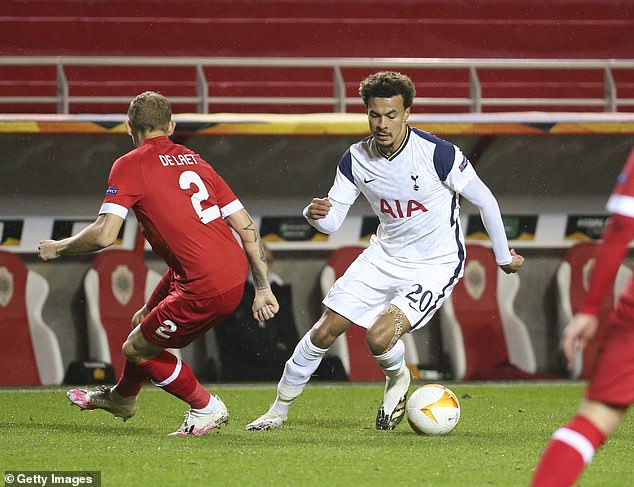 At 24, Dele Alli needs to regain control of his career and to do so he must leave Tottenham

Questions raised over dossier that helped plunge England into lockdown

'I will commit to the lightweight division for 2021': Conor Mcgregor outlines intentions in Q&A