Dogs were already splitting into distinct breeds after the Ice Age 11,000 years ago when humans were still hunters and gatherers, study of ancient canine DNA reveals

Dogs are humankind’s longest-serving animal companion and millenia of coexistence has earned canines the well-deserved title of ‘man’s best friend’.

Now a new study has found dogs, which evolved from wolves, were splitting into distinct breeds as long ago as 11,000 years ago.

A total of 27 ancient dog genomes were sequenced and they revealed that when the last Ice Age ended, there were at least five types of dog.

These ancient breeds each had their own unique genetic ancestry and traces of them are seen today in modern pets.

This graphic shows where some modern-day dogs get their genetics from. For example, the Australian dingo  is a close descendent of the New Guinea Singing Dog. Meanwhile, the chihuahua and Irish terrier have traditional European ancestry

Pontus Skoglund, study co-author and group leader of the the Ancient Genomics laboratory at the Francis Crick Institute, says: ‘Some of the variation you see between dogs walking down the street today originated in the Ice Age.

‘By the end of this period, dogs were already widespread across the northern hemisphere.’

Modern dog types emerged from the evolution and breeding of these five ancient groups.

The study, published today in the journal Science, allows researchers to track the evolution of dogs.

It showed that in the early days of dogs in Europe, there was a lot of genetic diversity, with the pets originating from either the Near East or Siberia.

But this ancient genetic picture is much different in modern-day dogs. 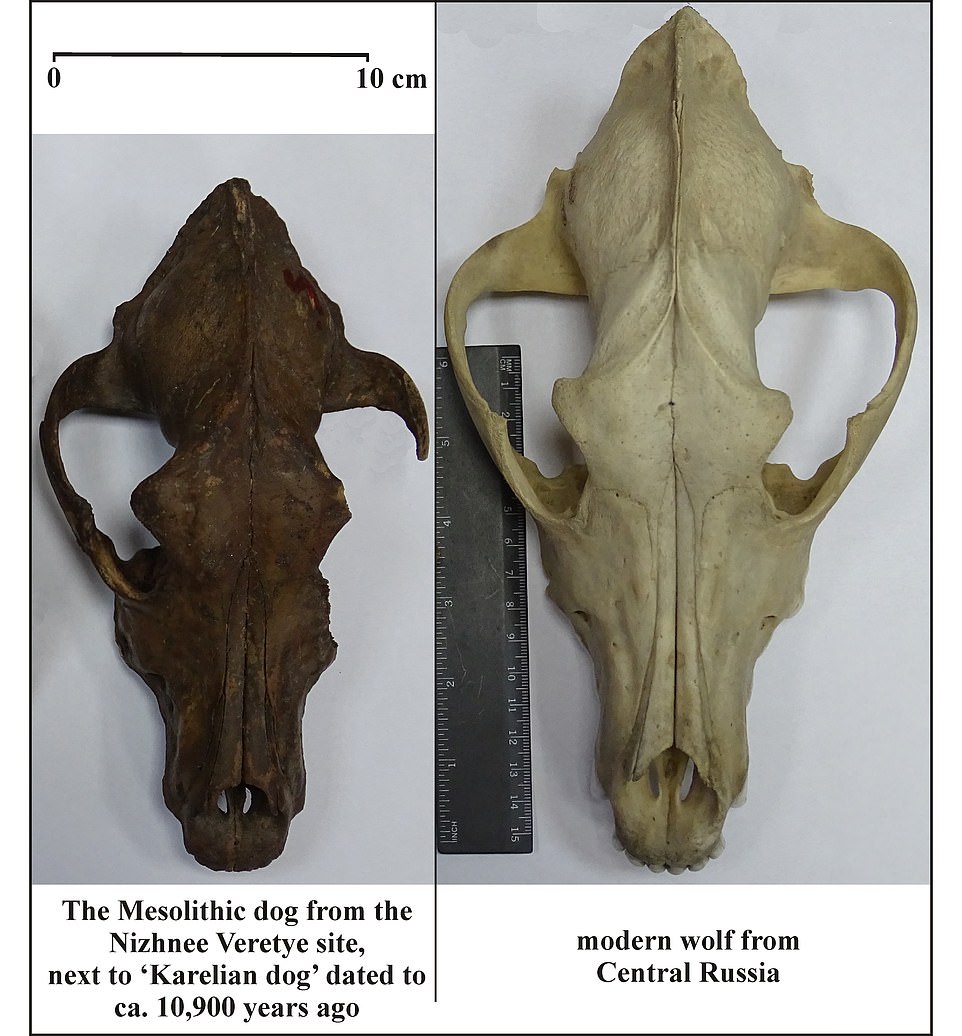 The study looked at the genomes of 27 dogs dating back as far as 10,900 years (left) and compared it to modern dogs and wolves (right)

Remains of a a dog that ‘lived alongside humans’ up to 20,000 years ago are found

Archaeologists have unearthed what they believe could be the oldest ever remains of a domesticated pet dog.

It is thought the remains could be between 14,000 and 20,000 years old, spanning back to the very dawn of the special relationship between humans and canines.

While dogs are known as man’s best friend and one of the most domesticated animals on Earth, the origin of this dynamic is still a relative mystery.

Researchers from the University of Siena in Italy hope their discovery can shed light on how dogs made the change from wild carnivores to loving companions.

Anders Bergström, lead author of the study from the Crick, says: ‘If we look back more than four or five thousand years ago, we can see that Europe was a very diverse place when it came to dogs.

‘Although the European dogs we see today come in such an extraordinary array of shapes and forms, genetically they derive from only a very narrow subset of the diversity that used to exist.’

To see if the European dog upheaval was caused by human migration, researchers compared the canine data with that of ancient people.

It revealed that, in most cases, the migration and evolution of dogs closely tracks that of humans, indicating they were by our side since the last Ice Age.

However, one notable example of where human history and dog history does not align is in Europe.

The analysis reveals a single dog breed became dominant in Europe, displacing the two incumbents, but there is no clear influx of people.

The study also found very little gene flow from wolves into dogs at this time, leaving it a mystery as to how these dogs took over Europe.

Greger Larson, another co-author of the study, said: ‘Dogs are our oldest and closest animal partner.

‘Using DNA from ancient dogs is showing us just how far back our shared history goes and will ultimately help us understand when and where this deep relationship began.’

Ron Pinhasi, author and group leader at the University of Vienna, says: ‘Just as ancient DNA has revolutionised the study of our own ancestors, it’s now starting to do the same for dogs and other domesticated animals.

‘Studying our animal companions adds another layer to our understanding of human history.’

A genetic analysis of the world’s oldest known dog remains revealed that dogs were domesticated in a single event by humans living in Eurasia, around 20,000 to 40,000 years ago.

Dr Krishna Veeramah, an assistant professor in evolution at Stony Brook University, told MailOnline: ‘The process of dog domestication would have been a very complex process, involving a number of generations where signature dog traits evolved gradually.

‘The current hypothesis is that the domestication of dogs likely arose passively, with a population of wolves somewhere in the world living on the outskirts of hunter-gatherer camps feeding off refuse created by the humans.

‘Those wolves that were tamer and less aggressive would have been more successful at this, and while the humans did not initially gain any kind of benefit from this process, over time they would have developed some kind of symbiotic [mutually beneficial] relationship with these animals, eventually evolving into the dogs we see today.’

Getting too many texts? Blame the election