Iguanas are dropping from trees after temperatures plunged in Florida


Iguanas are dropping paralyzed from trees in Florida as the Sunshine State experiences its coldest weather in 12 years.

No blizzard conditions were reported, but Floridians – seen bundled up and wearing jackets during the weekend – are facing other issues as the thermometer drops due to a nor’easter storm hitting the East Coast.

Temperatures in the low 20s and 30s have caused the reptiles to fall from trees, with the National Weather Service (NWS) warning residents of the phenomenon.

The NWS issued a winter weather alert and reported that West Palm Beach hit 37 degrees Fahrenheit, the coldest morning of the past 12 years.

Up the East Coast in Vero Beach, the record low was tied at 30 degrees Fahrenheit, set in 1978. The service said on Sunday it will warm up nicely after the weekend. 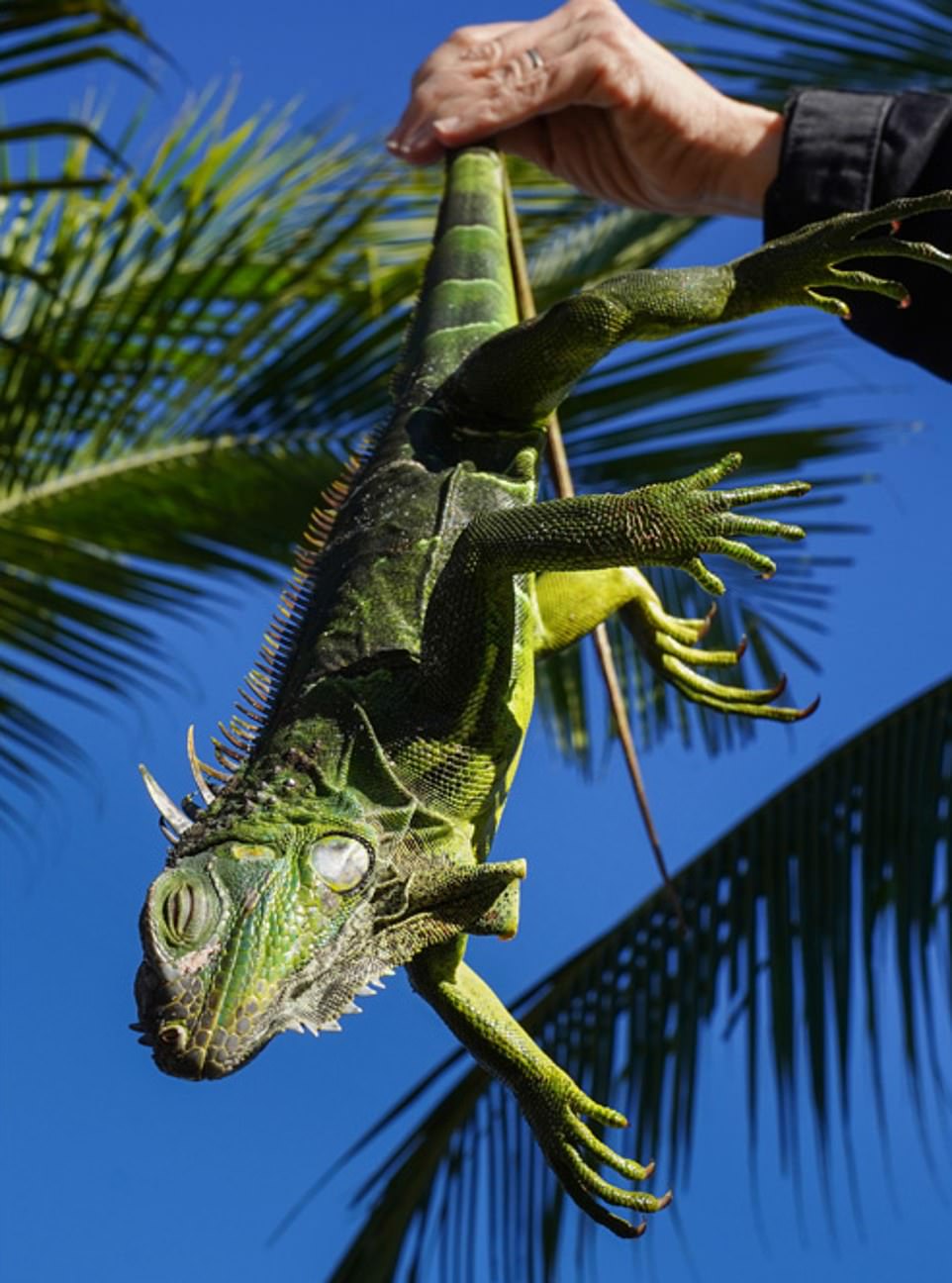 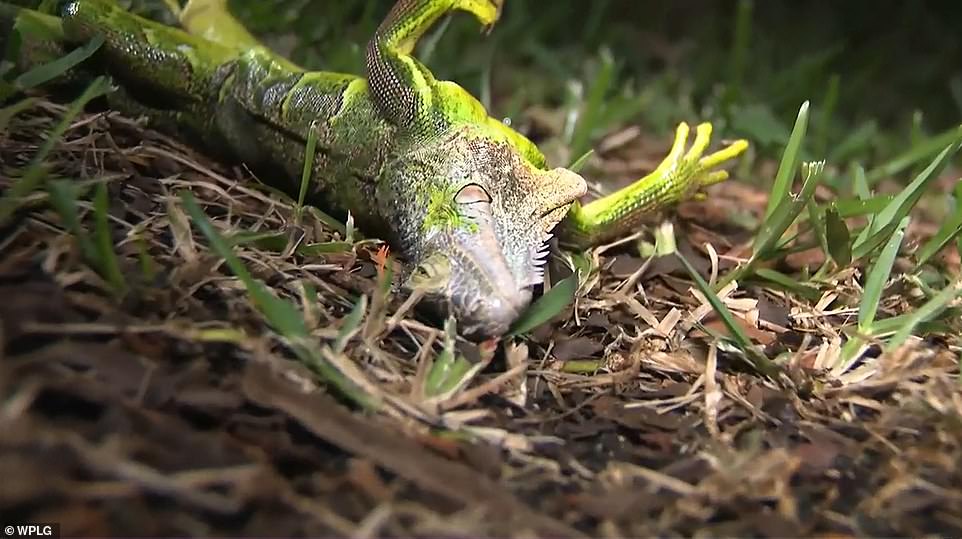 No blizzard conditions were reported, but Floridians are experiencing other issues as the thermometer drops due to a nor’easter crossing the East Coast 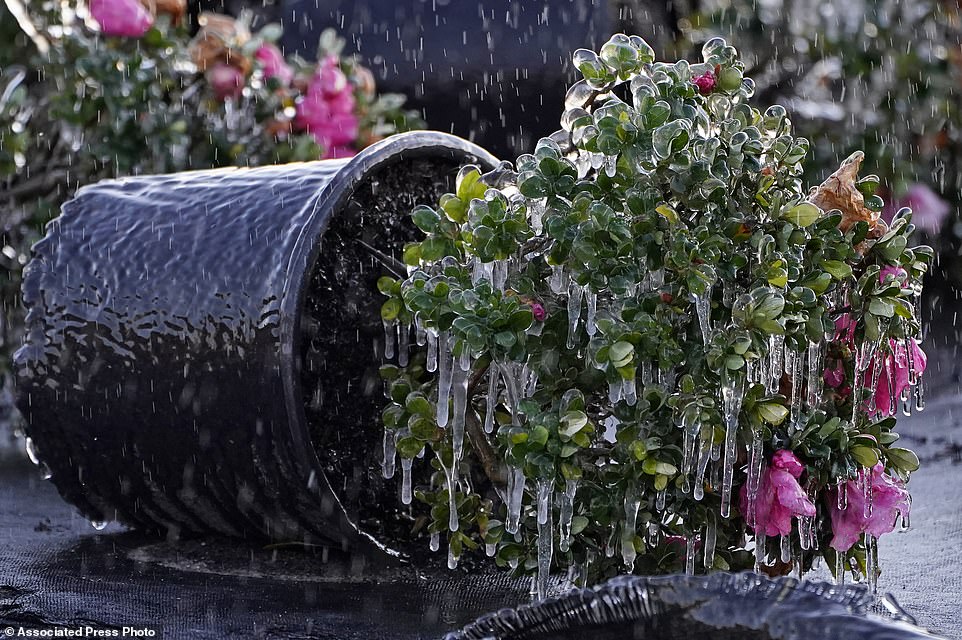 Ice clings to an ornamental plant at a nursery Sunday, January 30, 2022, in Plant City, Florida 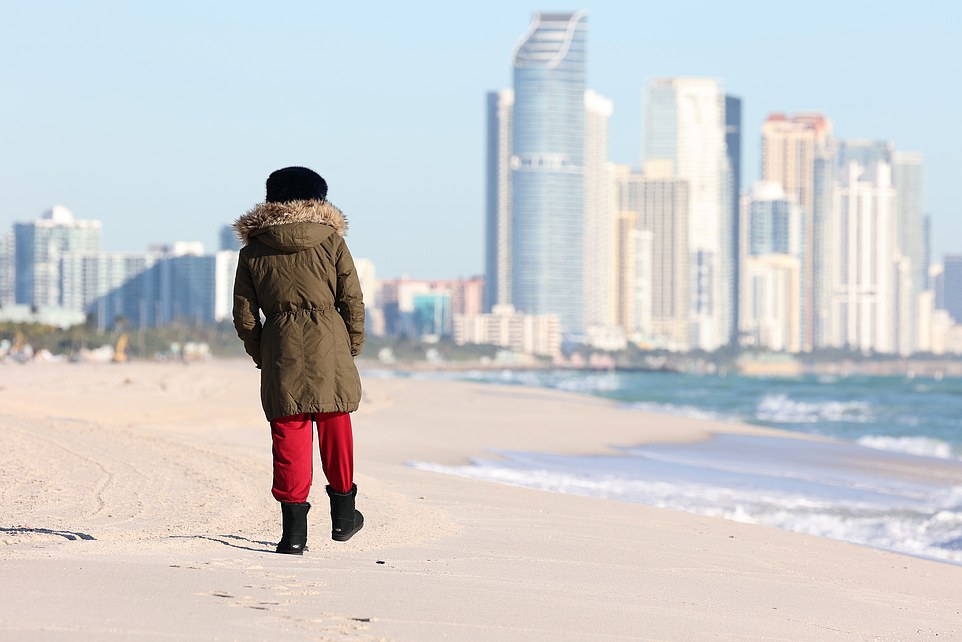 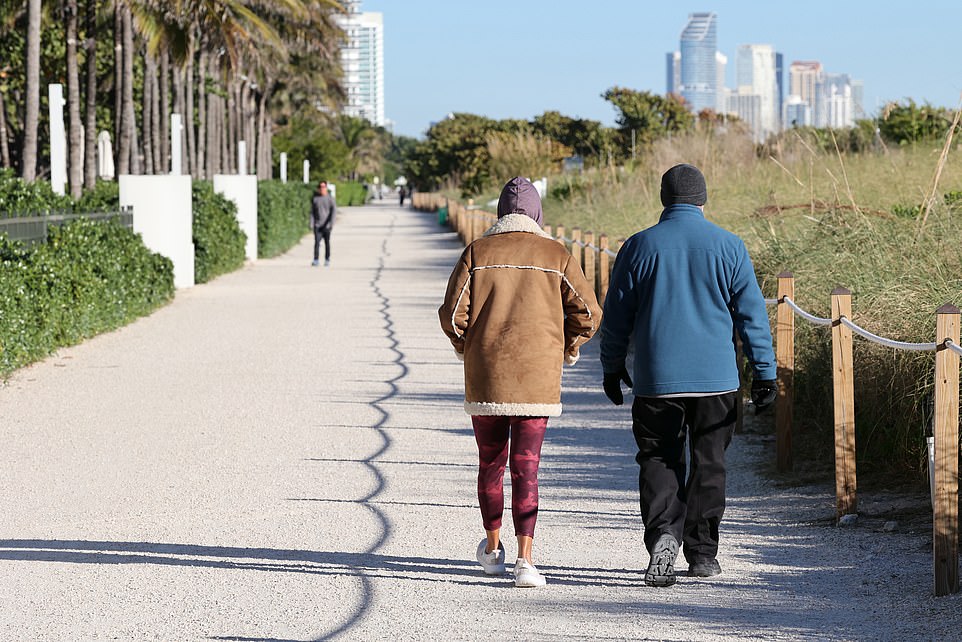 The NWS reported that West Palm Beach hit 37 degrees Fahrenheit, the coldest morning of the past 12 years

Iguanas are an invasive species well accustomed to the trees of South Florida.

When it gets cold, below 40 degrees, they go into a sort of suspended animation mode and fall to the ground. They usually wake up with the sun’s warmth.

Some parts of Florida are already under freeze and frost advisories, while hard freezes are possible in the northern and western part of the region.

The low temperatures near freezing are quite rare in the state, but at first glance the citrus, strawberry and tomato winter crops suffered no major damage.

Farmers spray water onto the crops to help protect them from the cold. 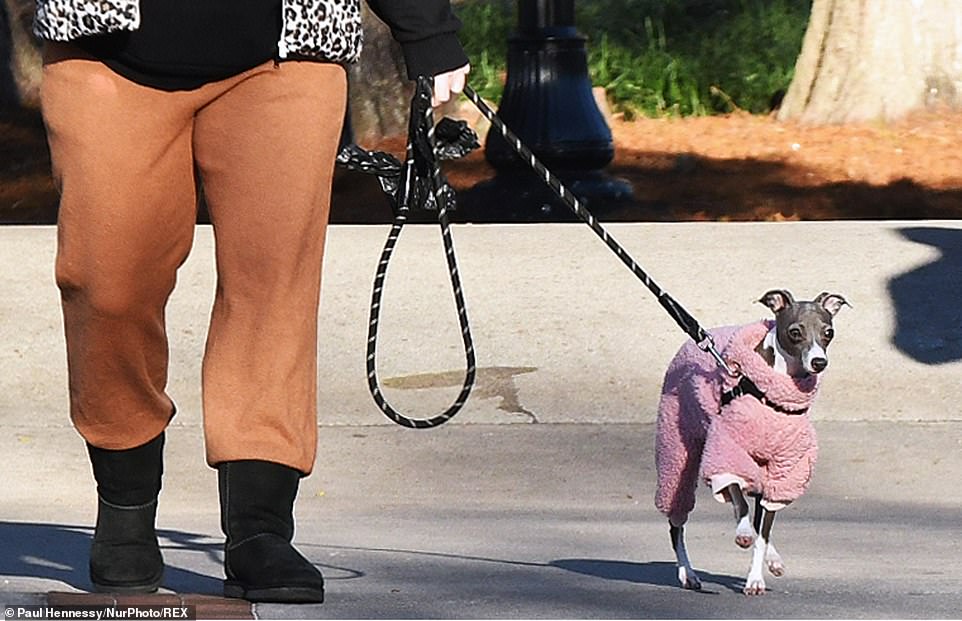 A dog is dressed for cold weather as it walks at Lake Eola Park on January 30, 2022 in downtown Orlando, Florida 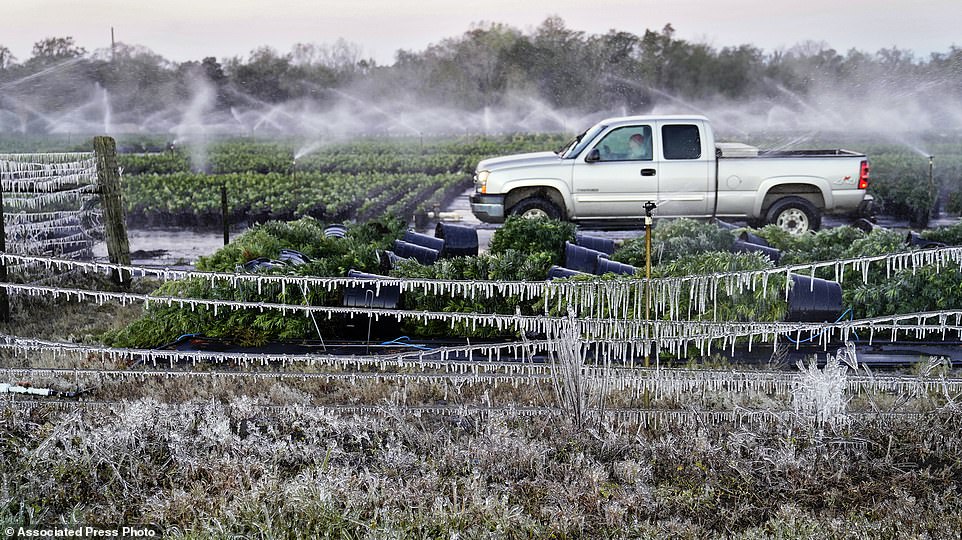 The unseasonably cold weather in Florida prompted one church on the Gulf of Mexico side of the state to rethink how it would welcome parishioners and visitors.

St. Michael the Archangel, on Siesta Key, canceled its two scheduled Masses on Sunday because it was too cold.

The church is going through a renovation and has been holding Mass outdoors, as it did on Saturday afternoon in 49 degree Fahrenheit temperatures and with brisk winds making it feel even colder.

Masses have been held under a tent, but Saturday’s wind dislodged one of the support posts and rendered the temporary structure unsafe.

The Rev. Michael Cannon was offering the sacrament of communion Sunday – drive-thru style – but Mass would not be held, in anticipation of temperatures falling into the mid-20s shortly after sunrise in the Sarasota area. 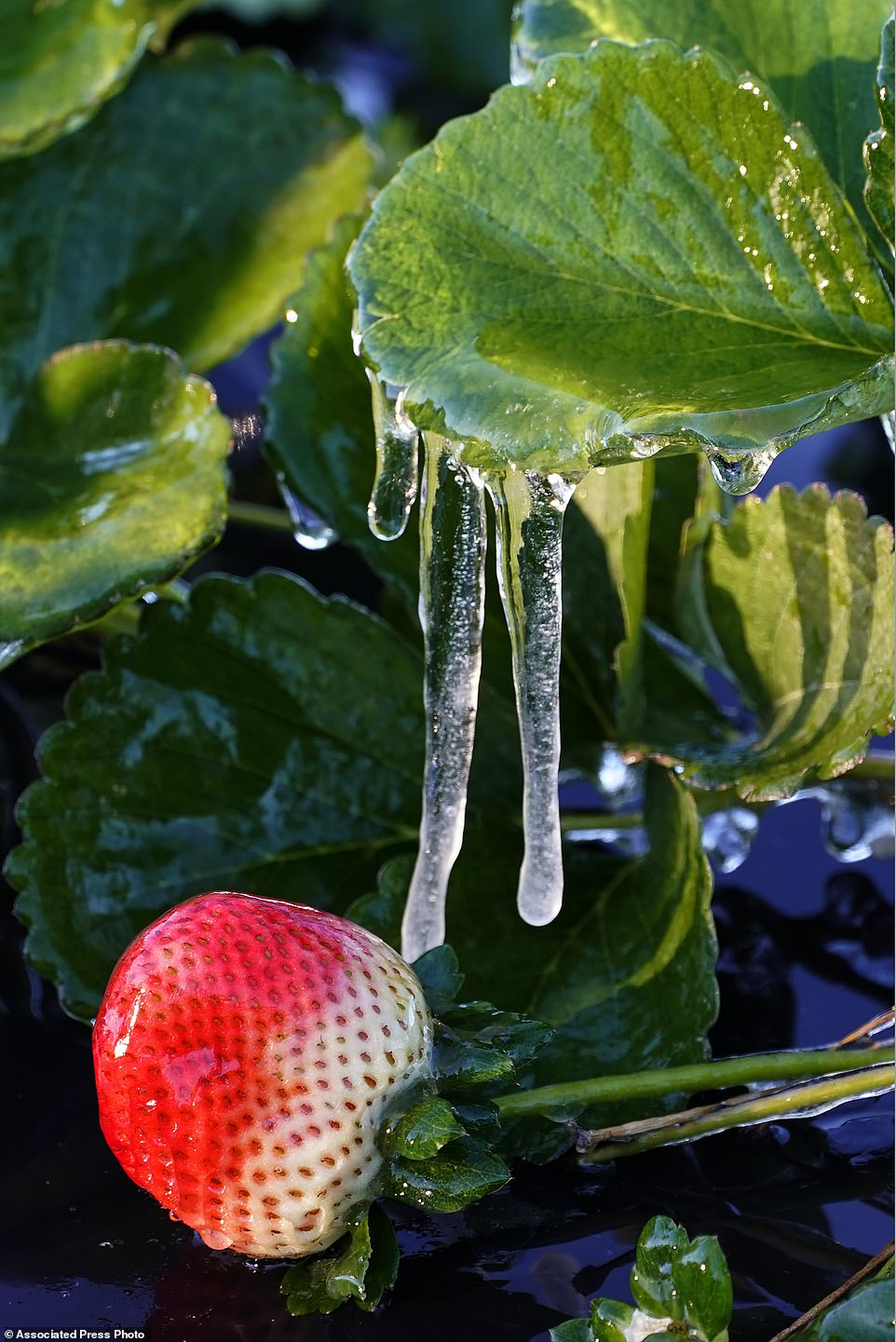 Florida farmers spray water on their crops to help keep the fruit from getting damaged by the cold. Temperatures overnight dipped into the mid-20’s 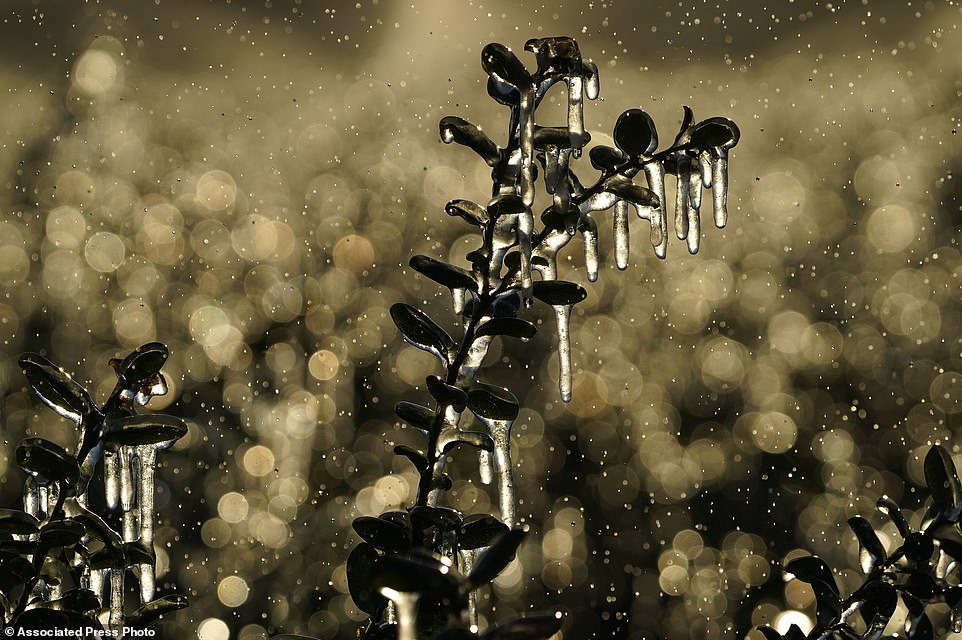 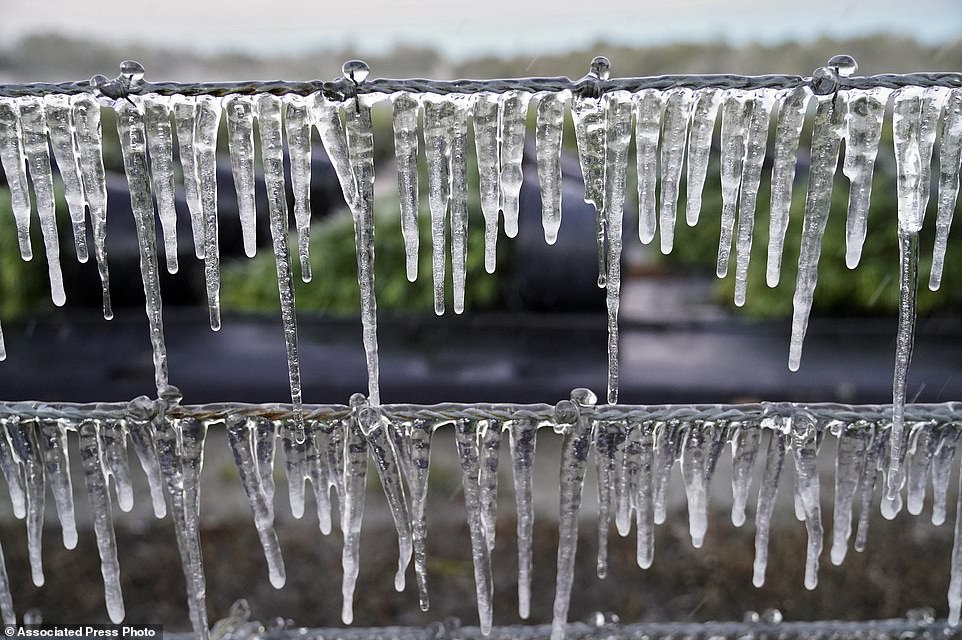 Icicles cling to a barbed wire fence outside a nursery. Central Florida usually experiences average temperatures in the low 70s, but this weekend the Sunshine State is expected to record plunging temperatures

Central Florida usually experiences average temperatures in the low 70s, but this weekend the Sunshine State is expected to record plunging temperatures.

Cold weather shelters have been opened across the state for those who need to shield from the freezing temperatures, whether they’re experiencing homelessness or not.

Iguanas, which usually thrive in the ideal Florida weather, tend to become stunned from the cold and lose their trip on branches.

Florida Fish and Wildlife (FWC) recommends to put the iguana in a bag or pet carrier, or calling an iguana hunter. 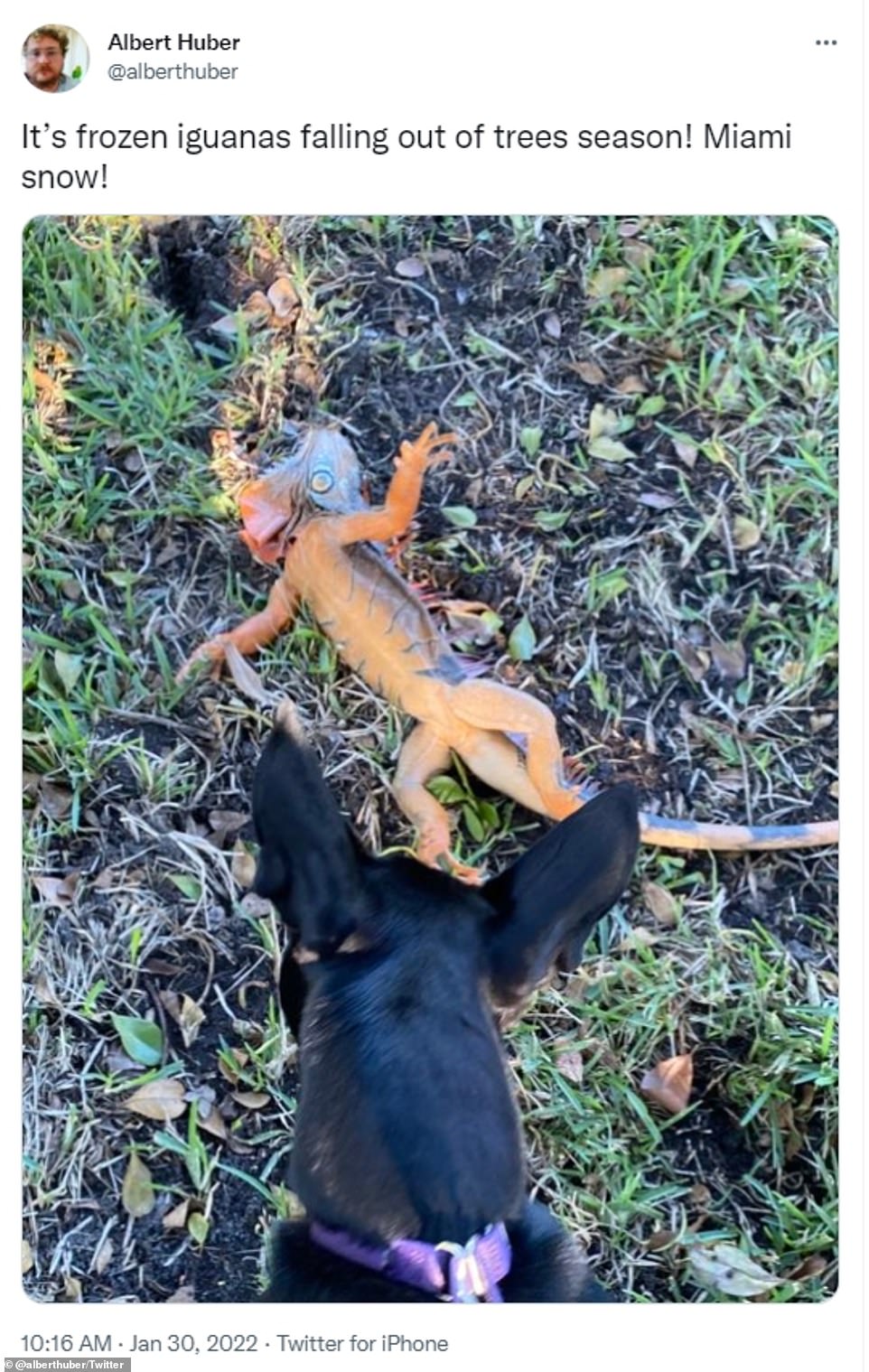 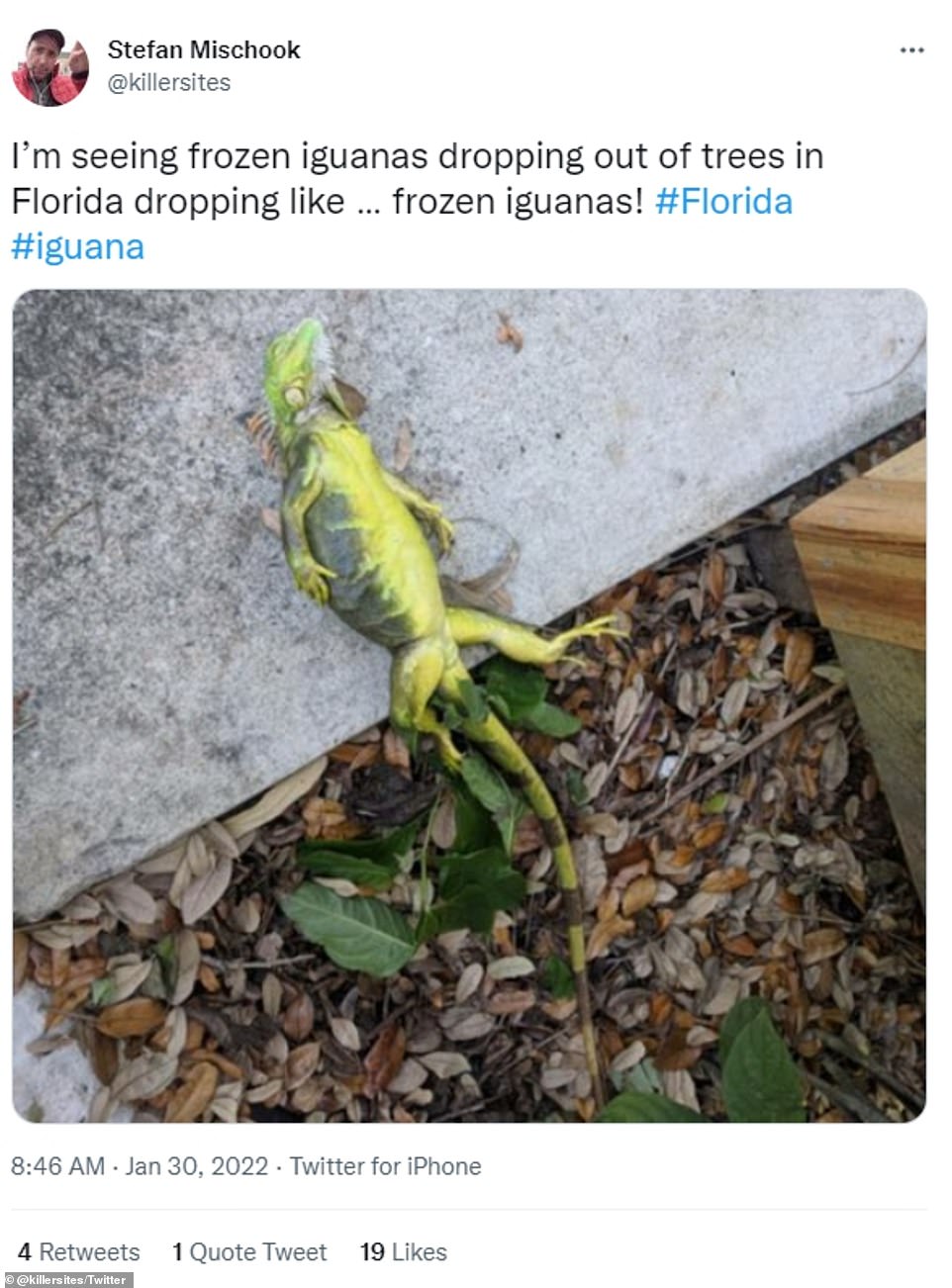 Many took to Twitter during the weekend to share their experiences after finding frozen iguanas in their backyards or on the sidewalks.

Wildlife experts have pointed out that people who find the dormant lizards could ‘humanly euthanize’ them in order to protect native species and tackle the reptiles’ fast reproduction in the state.

‘Once you trap it, you are unintentionally responsible for that iguana. If you feel bad…and put it back into the wild, you just broke the law,’ an iguana hunter told NBC.

And the law that you’re breaking is introducing an invasive species to Florida, which does sound ridiculous because they’re already here,’ he added.

Iguanas have been banned as pets by the FWC and it is illegal to transport them without a license.

Private companies will maintain valid concessions despite the nationalization of lithium: Rocío Nahle