The I’m A Celebrity… Get Me Out Of Here! contestants have been sleeping in hammocks and working in pairs to pump water for showers.

And it appears that hosts Ant McPartlin and Declan Donnelly‘s digs are worlds away from the camp as they have reportedly been living in a £1000-a-week cottage which comes with a hot tub, four bedrooms and even a trout farm.

The presenters, both 45, are said to have been relaxing at the Welsh abode which boasts a spacious kitchen and plush lounge, reports The Sun. 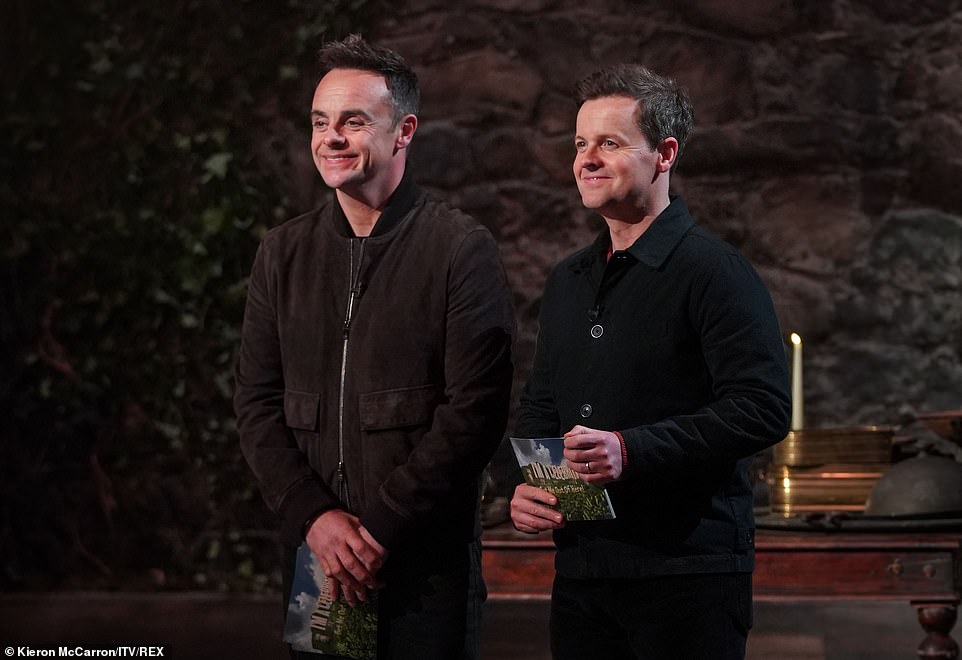 Not too shabby: Ant McPartlin and Declan Donnelly are reportedly living in a plush £1000-a-week cottage while they film this year’s season of I’m A Celebrity… Get Me Out Of Here in Wales 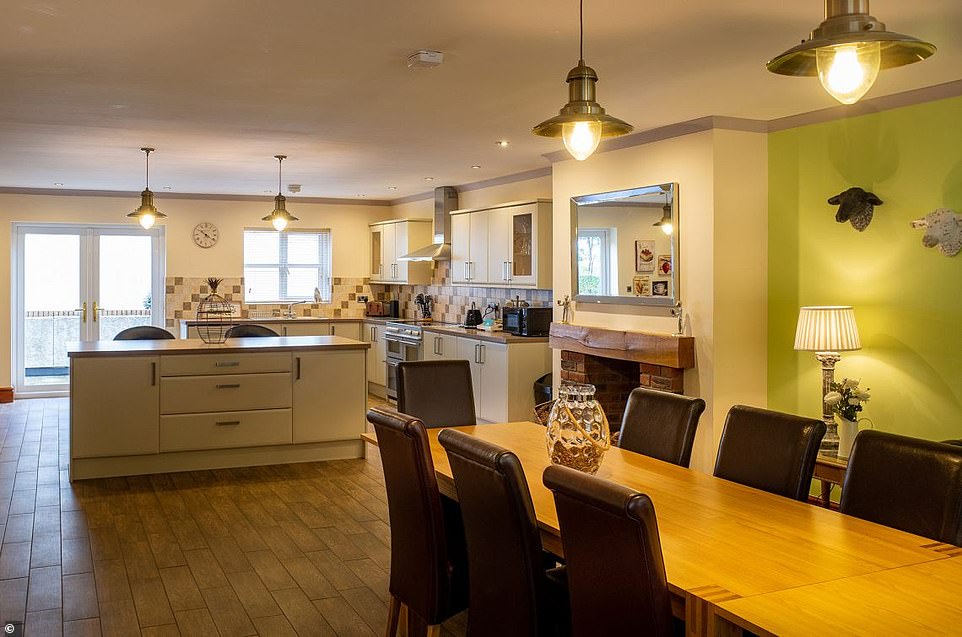 Spacious: The Welsh abode boasts a large kitchen with lots of seating space and room to prepare delicious meals after watching the contestants win their own paltry dinners

Pictures of the alleged lodgings show a huge open-plan dining and kitchen area, perfect for cooking in after watching the contestants win their own paltry dinners

While another image shows a spacious living area with two grey sofas covered in cushions and a comfortable armchair.

As for the sleeping arrangements, there seems to be four bedrooms for Ant and Dec to choose from. The master bedroom boasts an ensuite bathroom as well as an armchair placed by the window and lots of storage.

Pictures from the luxury cottage reveal a large tiled room with white flooring and a walk-in shower – nothing like the tin tub and water pump at Gwrych Castle.

MailOnline has contacted a representative for I’m A Celebrity and for Ant and Dec. 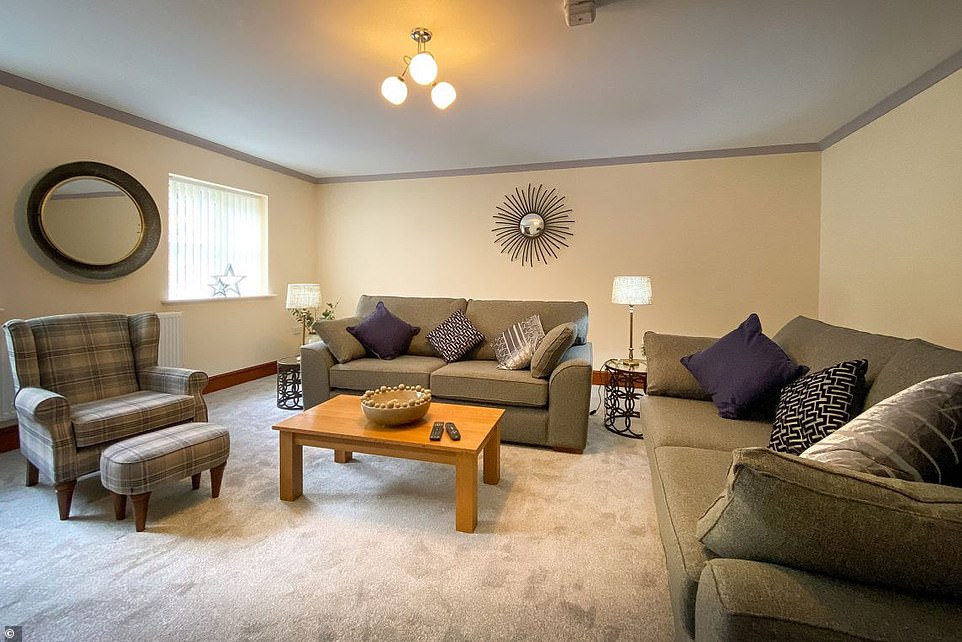 Time to kick back: A large living area boasts two grey sofas covered in scatter cushions and a comfortable armchair 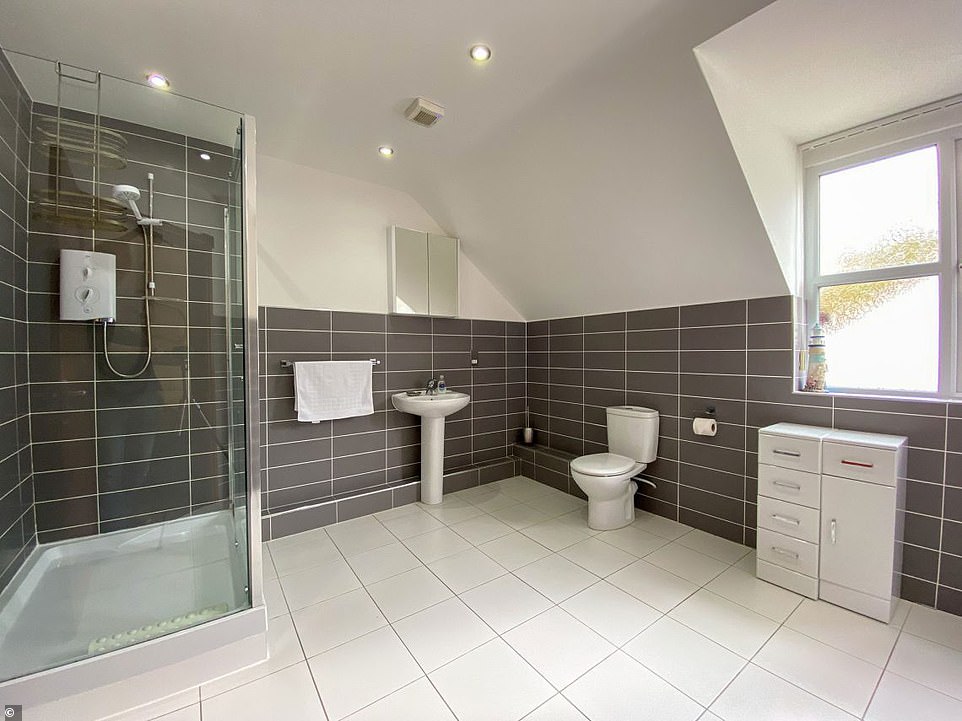 Worlds away! The bathroom at the cottage thought to be used by Ant and Dec is sparkling clean and covered in stylish grey and white tiles – nothing like the rusty tub in camp 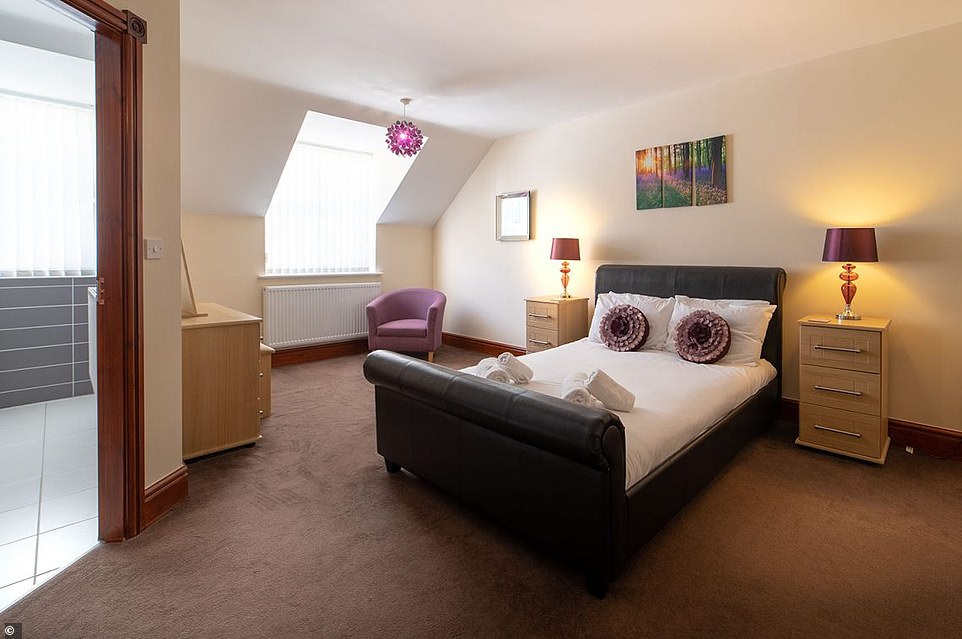 Plush: The master bedroom boasts an ensuite bathroom as well as an armchair placed by the window and lots of storage 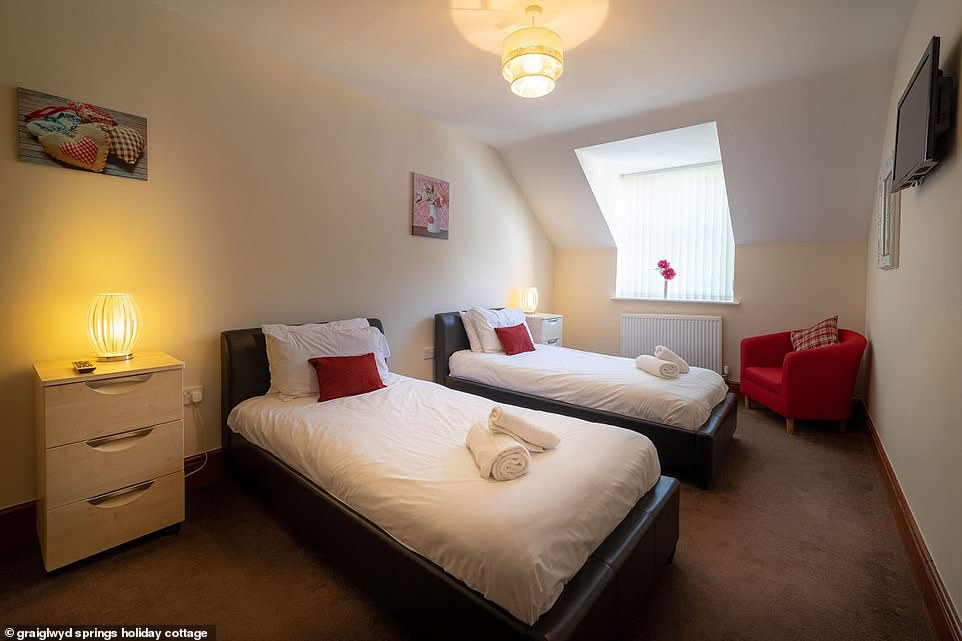 Space: While there are twin beds in some rooms, there are four bedrooms in total, so they won’t need to buddy up

The rest of the I’m A Celebrity team are staying at the Golden Sands Holiday Park in Rhyl, North Wales.

A source told The Sun: ‘Golden Sands is more than equipped to host the giant crew… They might not get a tan though.’

It comes as Beverley Callard and Victoria Derbyshire were the latest celebrities to be voted off I’m A Celebrity in the series’ first double elimination on Monday. 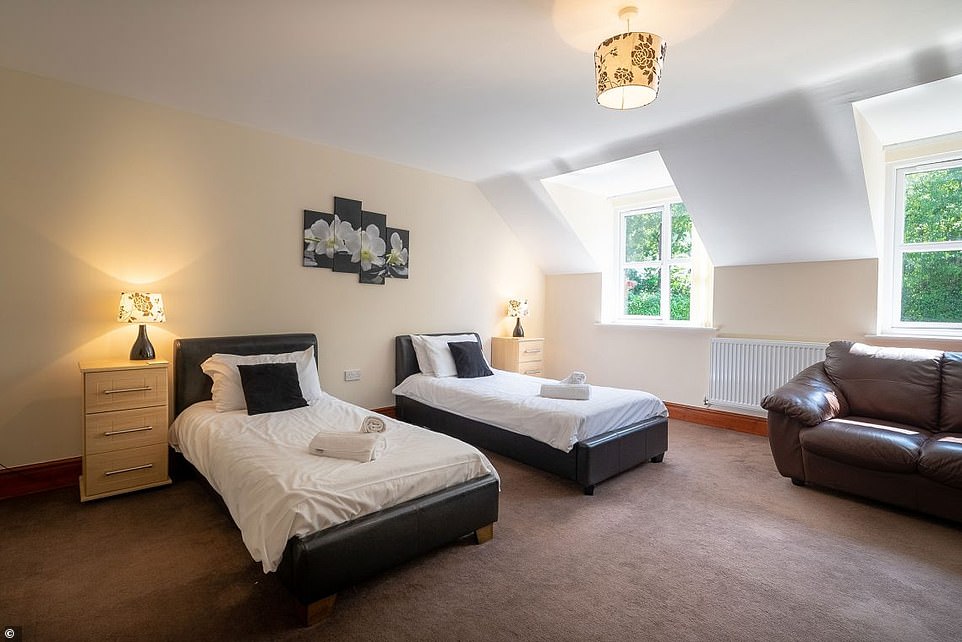 Comfort: A bedroom picture reveals lots of choices of where to rest after a hard days filming 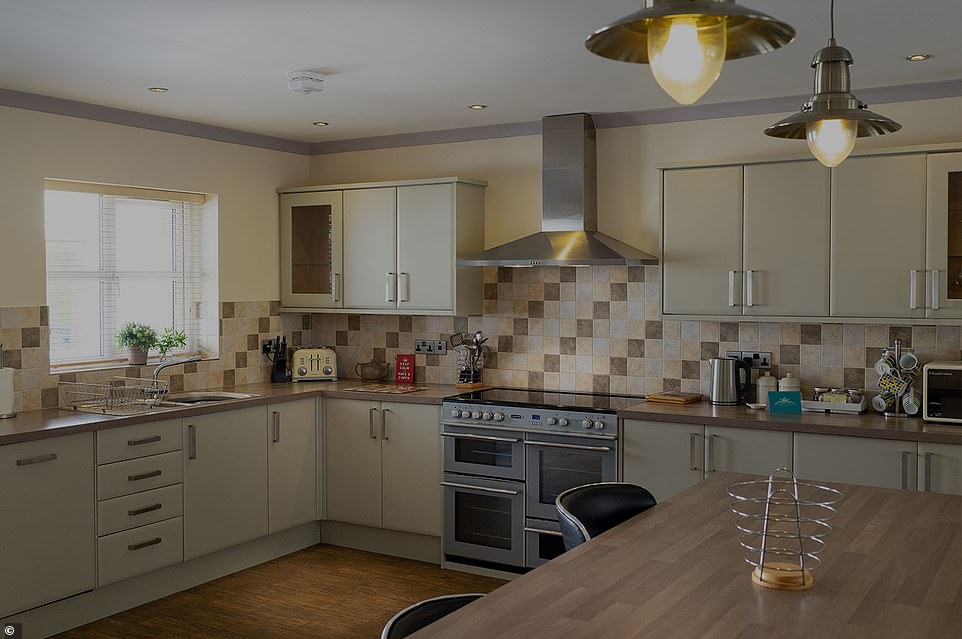 The Coronation Street star, 63, and the journalist, 52, fought back tears as they held hands on their departure from the ITV show, with the duo describing their stint as ‘absolutely amazing’.

The remaining eight celebrities will continue to be evicted from the programme’s new location of Gwrych Castle in North Wales each night until the finale on Friday.

Parasport athlete Hollie Arnold and actress Ruthie Henshall have already been booted from the show.

During a joint interview with Ant and Dec, BBC star Victoria said: ‘It’s been absolutely amazing. Marrying Mark and having my two boys – this is up there. 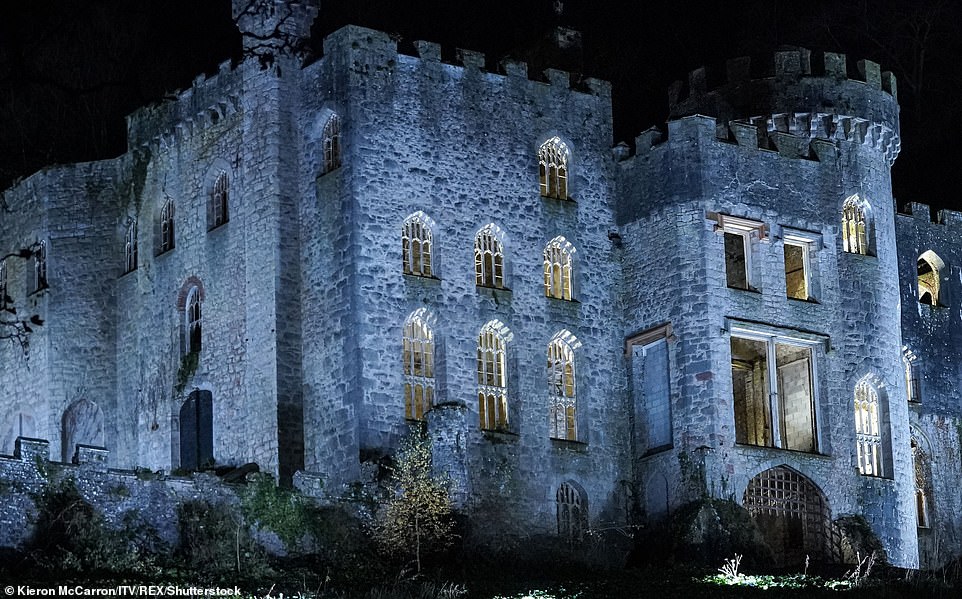 Contrast: While the boys are living it up in their cosy dwellings, the campmates are staying at the freezing cold Gwrych castle 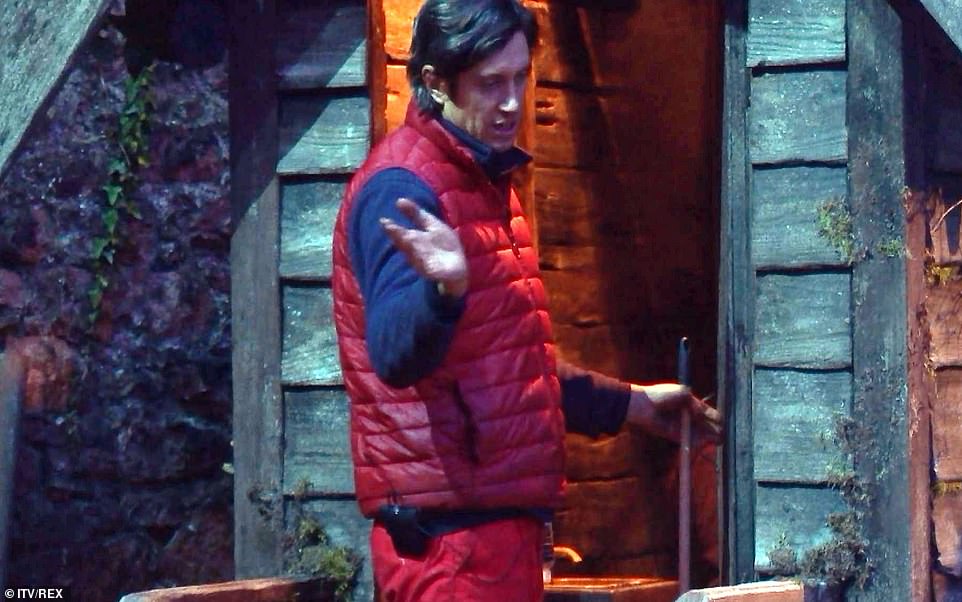 Basic: The campmates have been using a wooden outhouse as their privy at the castle (Vernon Kay is pictured on Monday’s I’m A Celebrity episode) 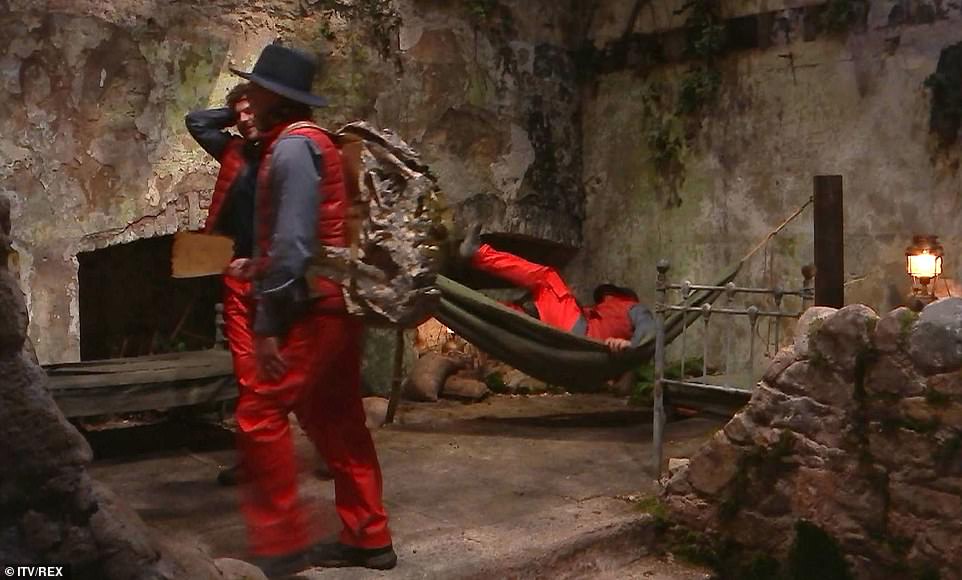 Oops: The sleeping arrangements are also nowhere near 5 star, with the celebs sleeping in hammocks (Mo Farah is pictured falling out of his last week) 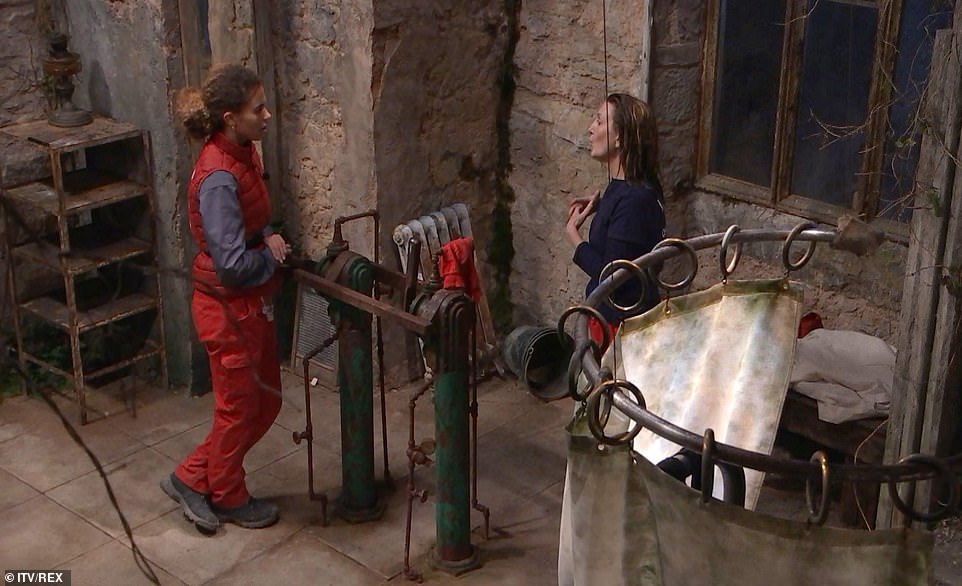 Bit of an effort: When the celebs fancy a wash they have to ask one person to pump the shower water while they get into a rusty bathtub (Victoria Derbyshire is pictured talking to Jessica Plummer about her cancer diagnosis on Saturday’s show)

‘I squeezed the life out of it. I would ask questions if I wasn’t a journalist! Legends like this… everyone has got a story to tell.

‘Within days there was something about having no distractions, it’s like OMG you’re telling your life story to strangers, but it was lovely.

‘You think you’d get on with most people as we’re normal and relative nice. I thought there would always be one [who you wouldn’t get on with], but there wasn’t!’

Actress Beverley added: ‘We’re sad to go but we’re happy to go. I don’t know what got me through it, I still feel like I don’t have any survival skills.

‘You just do it and your mind goes into a different place. It’s completely up there with everything, it was truly unforgettable.’

When asked who they hope will win this year’s edition, the pair agreed that they’d like to see Shane Richie and Jordan North in the final two.

Elsewhere in the episode, Russell Watson – who narrowly avoided elimination as he was in the bottom three – managed to collect five out of 10 stars as he was spun through a batter in the horrifying Rank Rotisserie task.

The tenor, 54, was quizzed on his general knowledge as he earned five meals for the team, before he joked: ‘I got asked to do Celebrity Mastermind, let’s just say I won’t be doing it.’

I’m A Celebrity continues tomorrow night at 9pm on ITV 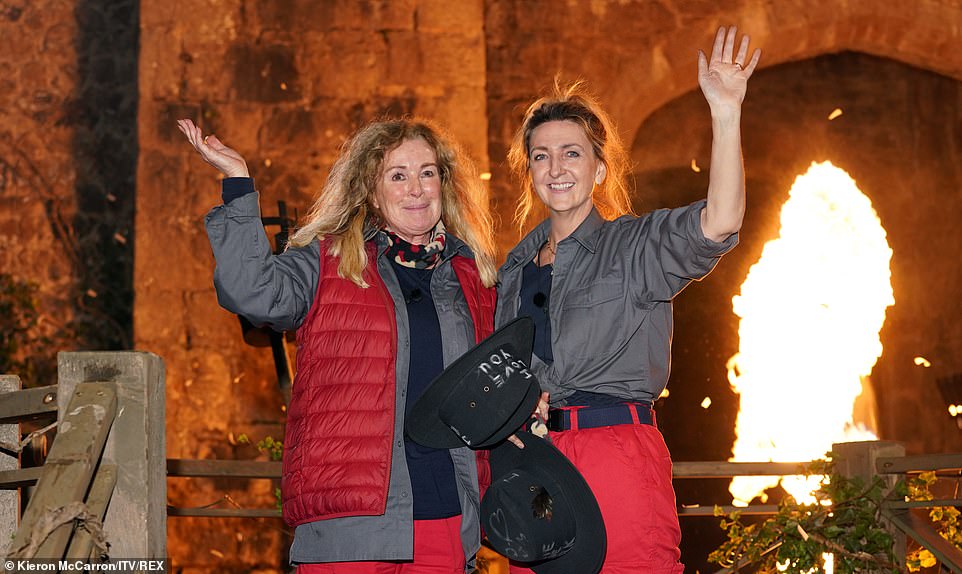 They’re out! Beverley Callard and Victoria Derbyshire were the latest celebrities to be voted off I’m A Celebrity… Get Me Out Of Here! in the series’ first double elimination on Monday

Putin says 'of course' Russia will extradite cyber hackers – but only if the US agrees...